Recon near the snow mountains 1944

Sorry for the delay in posting. Real world encroached as well as ACW Sharp Practice courtesy of Chris and more BTH II Squadron Forward. Still figuring out the Squadron thing but I think I will have to use a full squadron rather than a half. I keep losing pilots left and right! Below is Capt. "Bones" Stewart about to get his second kill while tailing a ME 109G. 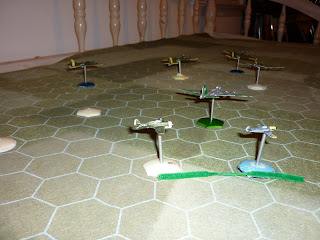 "Bones" getting 1 of his 2 kills during an escort mission. The other mission
his squadron was spanked losing 3 planes without a victory

Received "winter" boards for christmas. Finally got a chance to use them. This is an american platoon that has had 4 missions previously. Lt Brown is well liked by both the company and battalion.

Lt Brown, battalion is not sure what is going on, Capt Lincoln started the conversation. It appears Jerry is launching a major winter attack and our troops in the snow mountains are in danger of being surrounded. We need to know where Jerry is and in what strength. I want you to personally lead a recon up towards Stornach. Find Jerry and get a sense of what he is up to. I have 2 halftracks and a greyhound to get you moving. Brown, LtCol Jackson needs some answers and personally asked for you. I know you can get us some. God speed! 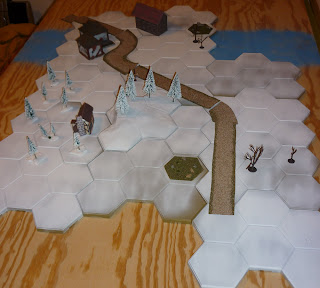 Americans enter along road from this edge
Hill in center, forest on left
WHAT IS YOUR PLAN LT?
Lt Brown's plan was to have the greyhound lead 50 yards ahead followed by 2nd squad in a halftrack followed by 3rd squad. He would accompany Sgt Gerrard who was the weaker of the 2 leaders. Upon any contact all infantry would dismount. If applicable, 2nd squad would go left and 3rd would go right. 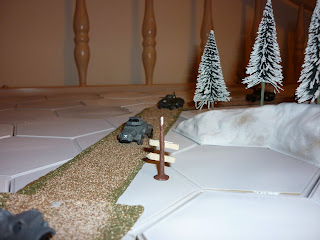 Initial contact
Greyhound would not survive
As the greyhound rounded the curve around the hill it stopped and fired 2 shots before it burst into flame. " What the hell?" thought Brown as both squads spilled out of their halftracks. He did not wait long for an answer. A PSW 222 AC came around the hill and started to fire at the halftracks. A lucky shot knocked the 50 cal off the lead halftrack and it almost ran Brown over backing up out of the battle. Brown sent his bazooka up to where 2nd squad had formed a skirmish line and sent 3rd squad towards the hill on his left. Meanwhile the 50 cal on the second halftrack forced the armored car back around the hill.
Sgt Claypool sent his squad torwards the hill and Sgt Gerrard's squad ran into SMG armed volksgrenadiers moving through the forest around the hill. 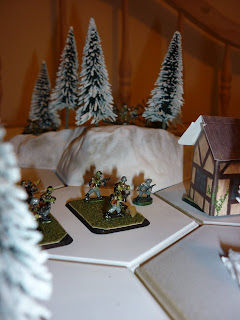 VGs trying to flank the americans. You can see
Sgt Gerrard on the hill ready to fire
Brown, upon hearing fire in the forest, moved in that direction. Sgt Gerrard had moved his BAR team down the hill and into the huntsman's shack. With the German's pinned, Lt Brown gathered the rest of 3rd squad and led them into the forest to hunt Jerry. 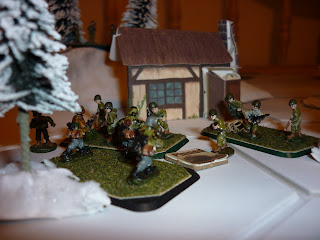 Hand to hand combat outside of the huntsman's shack
3rd squad 1 WIA Germans 2 KIA 2 POW
The surviving VGs retreated to the edge of town.
Brown pushed 3rd squad through the woods to the edge of the town. There they found a very nasty surprise! 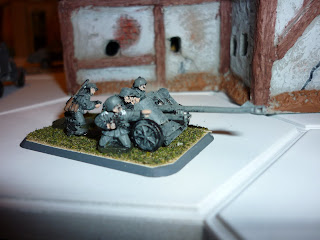 Very nasty surprise set up 40 yards from Lt Brown's position
Meanwhile back at the right side of the hill. Sgt Claypool looked into the town seeing nothing but the armored car and a LMG set up in the house closest to the woods. (the ATG came in as a random reinforcement and set up behind the building out of sight from the hill) As he pondered his next move from his right in the empty fields came clattering a stuart tank! Sgt McCanty had been separated from his platoon earlier in the day and had moved towards the sound of guns arriving on Sgt Claypools right. He quickly drove off the armored car and preceeded to move into the town (leadership check led him to charge the german positions!)
He drove past the building and turned, quickly setting alight the truck that had brought the ATG up when a lone VG appeared out of the building with a panzerfaust. 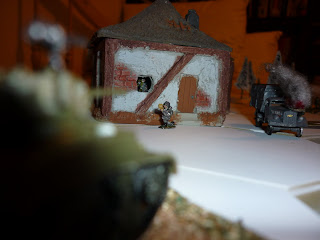 And the world held it's breath!
The panzerfaust fired with a roar and went wide right! The hull MG convinced the german to retreat into the house. Lt Brown charged the house with 3rd squad and lost 3 WIA before he pulled back.
At this point Brown reasoned he had accomplished his mission. He knew where Jerry was and that he was definetly on the attack. He decided he would take his 2 POWs back to company along with his brave stuart tank and let the brass decide the next move.
Great game that was quick as well taking about 2 hours solitaire. This was a meeting engagement which is fun as you don't know how it will turn out or what you will meet.
American forces
1 Greyhound AC
2 Halftrack
2 squads with 1 bazooka
1 stuart came in as random reinforcement but I think you have to include McCanty
Germans
1 PSW 222
2 trucks
1 SMG armed volks grenadier squad of 9 men.
1 LMG team of 4 men
2 Gr II NCOs
1 75mm ATG with gr II leader and truck as reinforcement on turn 4 (this also was random reinforcement but ended up saving the day)
Special rules
Both sides enter opposites sides of the road in column. Roll d4 for turn of entry
Check for bogging of trucks and halftracks if they move off road.
Sgt McCanty is very aggressive and will charge almost anything
Enjoy
Joe

Posted by FlightDoc at 7:02 PM No comments:

Hope everyone had a great new years and that this year will bring with it hope that will be realized. Did not game much over the holidays. Had one game over a government HQ in Danzig with my Dad. 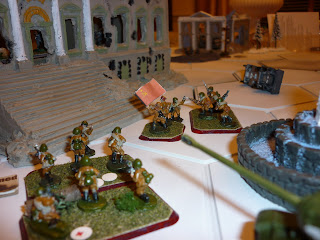 Russia steamrolls to victory!
Played several games of Bag the Hun by Too Fat Lardies. Fun games that emphasis men over hardware. Of course I have modified the rules! That got me thinking; could I do a Platoon Forward type of campaign for a squadron? Again it would not be tied to a set of rules but could be played with Check Six or any other plane to plane game. Parts of it would be easier (less people to worry about.) and parts would be more difficult ( less control over how you accomplish your missions) Have started tinkering around with a system. Will see what happens. Since I didn't play any platoon forward to report thought I would post this as a change of pace:
Flt Lt Thomas heard the briefer drone on. He was to patrol over the coast road with 4 Warhawks. Vital to protect the trucks... critical to the war effort... blah blah blah. He looked over at Sdr Ldr Workman. The man was an idiot but well connected. At least he wasn't flying today. Thomas would be in charge. No light brigade charges today!!
FLIGHT:
Flt Lt Austin Thomas Careful Veteran
Flt Officer Jessie Oldfield Jovial Veteran +1 leadership ability +1 on personality rolls
Sgt Ken Harrision Foolish Avg
Sgt Skip Harris Mercurical Avg -1 on personality rolls
Flying over a supply dump on the way to their check point they were fired on by friendly flak. Good thing the stupid bastards can't aim worth a darn! Need to drop off some recognition leaflets to those chaps.
Radar picked up 4 bogeys moving towards the road low and fast. Blast! Out of position. Throttle forward; scan the sky. Oldfield calls out bandits 12 o clock high! (He is a good chap and an excellent pilot.) Me 109s; no Me 110s! 2 climb and turn towards us while 2 make a run towards the road. "Jessie. You and Skip take the 2 climbing and I will go after the 2 running. Don't let those bastards dive down on us! 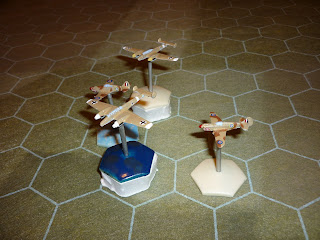 2 ME 110s pass over Thomas and Harrison
It soon becomes apparent that Thomas will not catch the 2 ME 110s before they get to the road. Flt Lt Thomas has already been fired on by friendly flak today so he eases up and tangles with the trailing ME 110s. He manages to smash the fore and aft cockpits of the leader but it refuses to go down. The leader turns to take on Thomas while his wingman races for the road. Jessie's element is in hot pursuit. 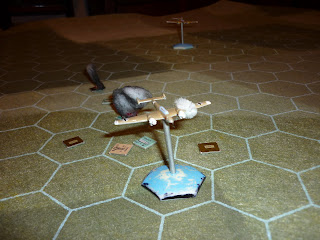 2 burning trucks on the road
ME 110 leaking fuel
Meanwhile the road is not pleaseant. 2 ME 110s each made 2 strafing passes and a 3rd plane made a single pass. Men spill out of our 4 trucks and our 2 MMGs fire madly. The lead ME 110 is hit on the first pass (fuel leak) but continues. When it is over, 2 trucks are burning and 2 trucks are disabled.
As the ME 110s streak 2oo ft off the deck for home the Warhawks engage. As Flt Lt Thomas moves in for a shot he passes across the front of a ME 110 for only a few seconds. The German pilots fires at the fleeting target. 20mm cannon shells hit the inline engine with explosive fury. It is doubtful wheither Flt Lt Thomas knew what happened before his warhawk exploded into the desert floor.
German forces
4 ME 110 C or Ds on a strafing mission 1 pilot Jr Ace, 2 veterans and 1 average.
It will take 3 missions for a replacement pilot and plane to appear. Meanwhile F/O Oldfield will run the flight. The only other thing that has happened is Skip Harris made ammends with his crew chief whom he had pissed off earlier.
The system has some merit. Who knows, maybe there will be a Squadron Forward some day.
Enjoy!
Joe