Things have been incredibly busy for me personally so little time for play or painting.  Crueler Seas is finished.  Just have to send it off.  Have finished painting a tanker as well.  I ordered some Russian MO-4s and Japanese landing craft from Heroics & Rocs 2 Jan and still waiting for them!

Way back in Oct I started a 2 part scenario of a rescue mission in Zaire.  The first part was an ambush of the rescue column.  Go read about it under october's post I'll wait....  Good now you are all caught up. Finally played part 2; the actual rescue.  At the end I will give guidelines for you to adapt for your own battles.

After the ambush Lt Lorray reorganized his forces.  He decided to lead with the armored car and he would trail in the jeep.  Bomba and his half squad would have to squeeze into the APC.
Same forces as in the Oct scenario.     I did upgrade them to 10/10 for this scenario. 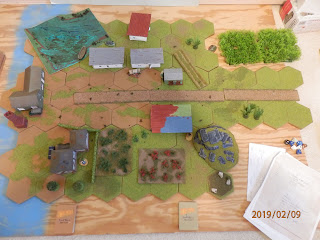 Outskirts of town.   Hostages (5) held in building at far left.  French enter far right.  Both buildings far left are of regular construction.  All other buildings shoddy.
Rebel forces start in both regular buildings and 1 "C" marker is placed there as well.  2 "As" and 2 Bs  are placed elsewhere on the board. 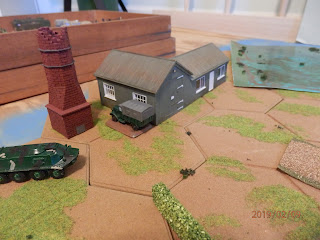 The plan was to race for the hostage building ignoring all other forces encountered.  The armored car would support an assault into the building by Sgt Barrie's full squad.  Sgt Bomba's half squad would assault the other regular building if it looked to be causing trouble.  The jeep would be in reserve. 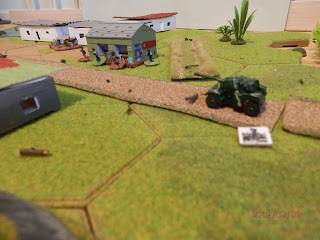 The armored Car enters town and is fired on by rebels that emerge from a shop. 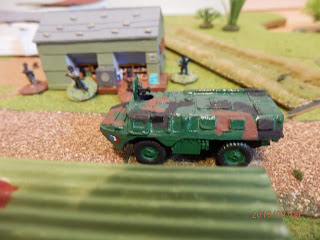 The same rebels attempt to slow the APC which becomes the main target as clearly the french will need infantry to rescue the hostages. 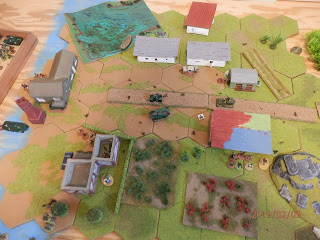 Satellite view provided by the US.  Armored Car has forced the rebel BTR to retreat.  ( Their morale was 8) French APC swings around to drive up to main building.  Rebels at the main house attempting to block and rebel reinforcements gather at the entrance of town. 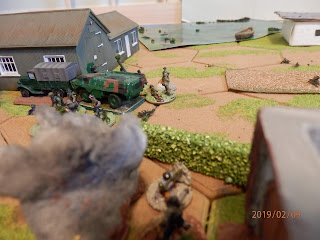 APC stops at the warehouse.  Sgt Bomba moves to engage rebels at the main house near the camera and Sgt Barrie moves towards the warehouse.  90mm shell from armored car exploding in rebel positions. 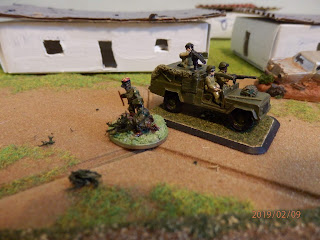 Lt Lorray leaves Cpl Collins facing towards the gathering rebel reinforcements to keep the escape route clear while he heads for the hostages. The moment of truth.  Sgt Barrie doesn't wait to bring his whole squad in but charges with half his squad.  Here FOF really shines as training is everything.  The rebels fail to get final defensive fire and it is straight hand to hand.  6 rebels and 5 very deadly legionaries.  ( I only play 2 melee rounds per turn then both sides can reinforce.)   First round... 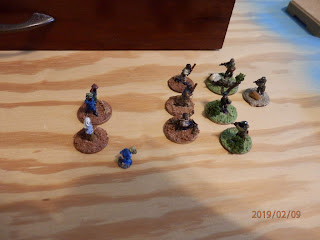 As we go the the second round the rebels have half their force left and the legionaries haven't lost anyone.  The rebels' morale holds though so...

The legionaries finish the job in just 2 rounds without a casualty.  The hostages are saved for the moment!

Meanwhile outside the warehouse... 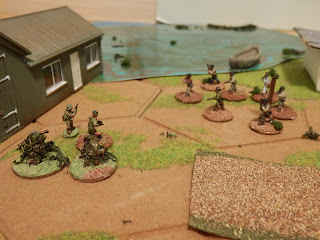 As the rest of Barrie's squad prepares to enter the building they turn to see a rebel charge.  Cpl Leach doesn't need Lt Lorray's order as the men turn and unleash a devastating barrage of fire that sees 3 rebels down and the rest scatter.

Sgt Bomba manages to pen up the rebels at the main house without sustaining any casualties. 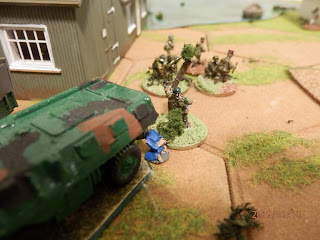 As the 2 half squads plus the jeep hold the fragile perimeter  Sgt Barrie loads the hostages into the APC wondering how everyone is going to fit.  Lt Lorray, fearing an overrun, calls for helicopter support. 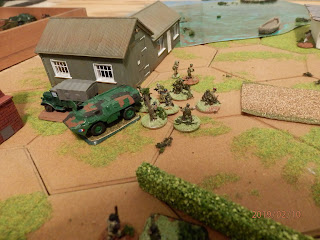 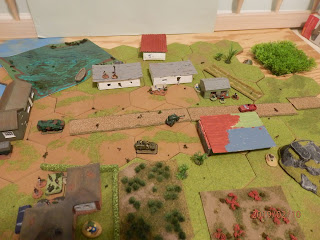 All loaded up.  Time to move!  Just then a technical rolls into town. ( random reinforcement)
The armored car ( which was pretty worthless all game) misses the truck as it races by. 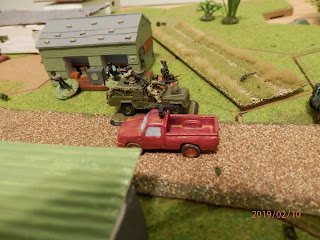 Cpl Collins flattens the tires and causes the crew to abandon it though! 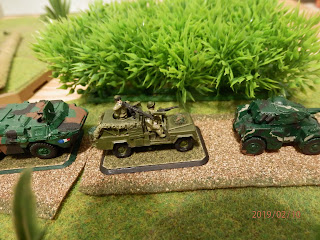 Our heroes rolling away after a very successful mission!


Great game that was tense all the way through.  Amazingly the legion sustained no casualties.  The rebels had 16.  Sgt Barrie's fame continues to spread throughout the legion and his leadership increases to Gr II ( above average).  Cpl Collins, our Oxford college grad, had his leadership increase to average in game due to a random event and he manages to make that permanent as well.  Two other events occur post game.  In the barracks the talk turns towards Barrie running the platoon instead of Lt Lorray ( don't say it Jack!) and even in the headquarters the thought is mentioned.  Second, Sgt Howell, from Arkansas, in charge of a Milan team talks Sgt Barrie into going on the next mission.

For those of you that would like to create a hostage rescue mission using Platoon/Grunts Forward use a similar set up above and the following special rules:

The 2 A blinds and 2 B blinds at the start are rolled up as per Grunts Forward.  Due to the heavy French vehicle presence you must end up with at least 2 RPGs.

C blind Due to the heavy vehicle prescence for the french I wanted to give the rebels a vehicle so I used the following table:
1    Technical w MMG
2-4 Technical w HMG
5 Technical w Recoiless rifle (probably 57mm)
6 APC   ( probably a BTR 152 but I used a BTR 60 instead )

Reinforcements will enter either via hotspots or along the north or south edges as determined randomly.


Posted by FlightDoc at 6:26 PM No comments: