Half way done with formatting Grunt's Forward.  Biased opinion but it looks pretty good and think you guys will love it.  With 16 African's painted it was time to take the 10th mountain division into Somalia.

Lt Concepcion leveled with Sgt Chin, " The Pakistanis are nervous taking out the food convoys. We need you to go out and give them a hand.  Protect the convoy but by all means protect yourself!  Not sure if you will get much help.  We will have gunships overhead if you run into trouble."
Scenario is "Ambuscale" from the upcoming Grunt's Forward.

Forces  ( pretty fake to have Pakistanis and US on the same convoy but it was interesting.)
1 HUMVEE with 50 cal.  5 soldiers including Sgt David Chin. (Elite)
Sgt Chin   Son of a banker went to junior college briefly before enlisting.  Pragmatic/Position  Gr I
3 food trucks driven by somali drivers that will run at the first gunfire.
1 car with 4 Pakistanis and a Gr 0 leader.    ( Green for shooting but normal for morale.)

It was decided that Sgt Chin would take the lead and the Pakis would close up the rear. 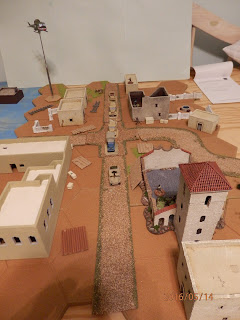 The Convoys rolls along.  So far so good! 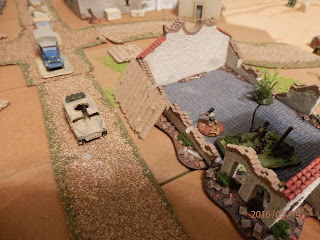 A LMG opens up from a rubbled building 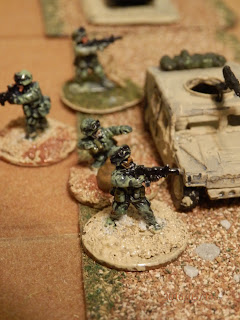 Sgt Chin deploys his team and the LMG is quickly neutralized. 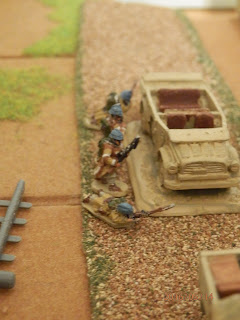 The Pakistanis are also shot at.  A sniper keeps them pinned down.
Several Somalis try to reach the trucks but are forced back into the buildings by the helicopter. 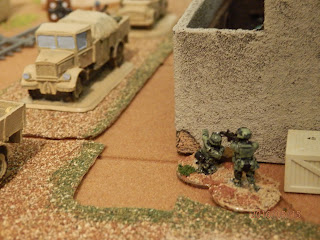 Sgt Chin leads his team to the enemy strongpoint.  Two quick grenades leaves three somalis wounded and they make their break out the back.  Sgt Chin did not feel he had enough force to cover all exits.

The convoy continues to the distribution center without loss!

Quick game which ambushes usually are.  Either the initial strike works or it doesn't.  The Somalis rolled up minimal forces.  They were:
1 LMG team with Gr 0 leader
1 Squad ( 7 AKs) with Gr I leader
1 sniper
That certainly helped Sgt Chin.

It also showed that Grunt's Forward will work post Vietnam.  Have played three scenarios out of the book and all have gone well.  In addition, Combat Patrol works for the modern period too.  Wish Buck will give me some stats for HUMVEEs though!