A bad day for the AVG

Pop down 2 posts to read about my AVG flying tigers.  Have decided to go with a new stand system since the freebie stands from Raiden did not work as well as I hoped.  My planes would fall off about 20% of the time.  Went with the Omni stand from CorSec enginering and bought my own magnets from K and J to glue onto my planes.   Have to say it is working out very well.  The stands are a bit expensive ( $ 3 ) but are telescoping, sturdy and the acrylic bases look sharp.  They should last a lifetime so money well spent!
I also finaly painted up some Nates so it was time to try out my stands and the Nates against the AVG

Squadron Leader Niece called Jake into the operations hut.  Jake didn't like Niece because he was obnoxious.  No one in the squadron did.    " Well Jake, since you are such a good shot I would like you to take a couple of planes and escort some bombers up to Thailand tomoorow." 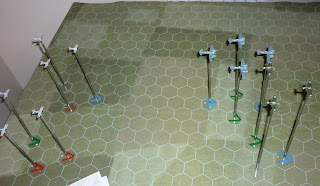 The new stands and Nates!

Unlike last battle where the Tomahawks crept up on the Oscars; the Nates held the advantage here. 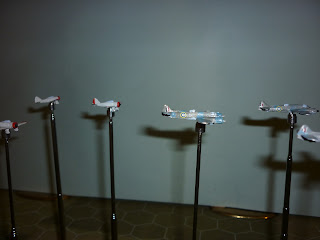 Nates start their runs on the bombers.
(No planes falling off stands today!)

The bombers radioed they had Nates on their tails.  Blast!   The AVG had been caught out of position.  Davis quickly did a half loop and tried to get into postion.  With the Tomahawks speed not much better than the bombers this proved difficult to do.  The Nates where very experienced pilots and 3 bombers fell in the melee. 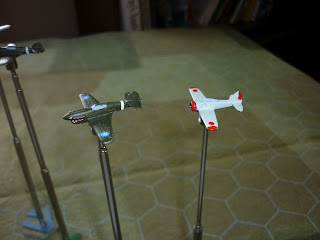 A Nate behind Bill O' Toole

Bill's plane exploded in a fireball And MacGuillicuddy dove a way with his tail in shambles  during the battle as not one Flying Tiger managed to get a shot off.  The surviving Blenhem did hit the field doing minor damage and destroyed an light AA gun.   MacGuillicuddy crashes his plane back at the field and wounds himself.   All in all a bad day for the AVG.

A one sided battle that was frustrating.   I was glad Davis wasn't hurt as he is my leading AVG scorer.  Bill was the only green pilot in the AVG.  Moose's landing was excting and he will be back.  The post game events were more exciting.  The squadron loses 1 cool point for getting smoked so bad.   Squadron morale goes down due to a combination of Sdr Leader Niece lack of popularity and Miss Rennisson Flaunting her desire for wingman Schroeder rather than giving the other pilots a chance.  Lastly Chenault gives the squadron a new plane to replace O'Toole's.    If morale continues to drop he will be forced to remove Niece.  What if the Govoner finds out about Miss Rennison and Wingman Schroeder?   Again in Squadron Forward sometimes fighting the enemy is the easy part!

For those of you wishing to play the scenario the Japanese have 6 Nates that start in the 6 o'clock position 2/3 of the spotting distance from the bombers.    Their pilots were rolled up as follows:
1 ace/ 3 Veterans/ 2 Average

Luck finally evens out at Ovietto

Had the pleasure of entertaining Richard Clark last week for lunch.  He was kind enough to drive up to Suffolk and we talked about TFL as a bussiness, the differences between US and UK gaming conventions and family chatting.   We didn't even have time to talk about Dux Brit, Squadron Forward ( a little- he has done the primary text formating) or philosophies of gaming.   We did agree to travel down to Salute together.  Frankly I was just happy they let him on the airbase.  I think it was because he must have borrowed a coat and tie from Nick!
No pictures from the visit so how about this from my game table.
Finally played a WW II game of Platoon Forward.  Used my British platoon in Italy.  This platoon is hard luck but fun to play because they have a lot of characters even for PF.  Balls Foster, Red Talbot, a narcisitic Sgt, 2 Scots-- it is great.  Go read Counter attack at Orvietto [Dec 2009] which was a nailbiter; I'll wait.
They British were ejected out of the town and Sgt Barnes was wounded in the fighting.  Lt Talbot continues to be incensed at Sgt McNabb but doesn't want to go to Balls and complain untill he has a solid reason to remove McNabb.  The Company Sgt Maj , Sgt Maj McCarthy is McNabb's uncle.  As you can see this storyline is PF at its finest.  Poor Red is stuck at the moment.  The only good thing is 1st section is reconstituted and Cpl Clarkson as joined the platoon.  He seems ok...

"Balls" had been ignoring Red since the retreat.  He seemed preoccupied so Red was happy to have an audience.  "Leftenent, we need to know what Jerry is up to in town.  I suspect they are using a factory as a stronghold.  I want you to take some of your boys and go check it out.  It will probably be heavily defended so get the lay of the land.  I will send some bren carriers with you so if you can give them a bloody nose do it!"
Red decided to take 1st section to see what Cpl Clarkson could do and 3rd section so either McNabb would mess up big time or get wounded.  He would also take the 2inch mortar to shell the facotry and cover it with smoke if needed. 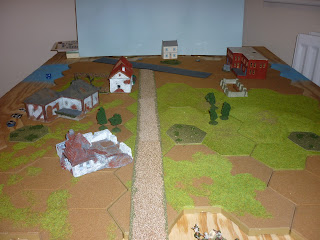 Red decided to make a clockwise circle of the board with 1st section in front.

[ This was a patrol scenario but I rolled up a key building on board 3.  So I went with it and made it a factory and a sort of recon mission.  I love patrols because anything can happen.  You don't even know where the battle will take place!]

The sections started to scout the houses on the left side of the road while keeping an eye on the factory.  Suddenly shots rang out from trees across the road!

Red moved 1st section towards the left to provide flanking fire while the 3rd section laid fire on the grenediers.  Shots were traded until Red was sure all they were facing was a single squad and it's halftrack. {all the other blinds came up nothing!  Luck evened out for this platoon today!} Red figured all the other Germans must be in the factory.    He moved up the bren carriers
The Bren fire from the rear coupled with 3rd section in the front made the german commander realize his posiiton was tenuous.  He started to withdraw to the supply yard.  Meanwhile the German ATR could not find the range.
Then all on the battlefield hear the sounds of an airplane.  [ random event]  Looking up it appeared to be a hurribomber.  It started its run on the german halftrack.  [ rules for aircraft for tactical games are found in part two of my lazy TW&T articles.  I rolled a 40mm cannon armed hurrican.  Luck has really changed for the platoon.]

The germans managed to retreat to the supply yard

With the halftrack gone and 4 casualties the germans decided to leave the field through the factory.
Red, saw the germans go into the factory but brought up both sections before entering as he still thought the factory to be heavily defended.   Thus a resounding win for our platoon!

Great game that played fast as platrols usually do.   Luck was totally with the platoon as they rolled up armor support and then got addiitonal support for their pre game event.  On top of that the gerrmans only had 1 squad plus halftrack.   Odds are they should have had 2 with a LMG or MTR.  Finally to get air support-- it was unreal.  The british sustained one casualty.
Post game McNabb did not do badly enough that Red wanted to take a chance on removing him even with a win on the mission.  Red  was called up to battalion to brief his mission.  There he met Maj Turlock, the battalion XO, and they have become friends.

For those of you that want to play this the german force was 1 panzergrenidier squad [don't forget the 2 LMGs] and 1 halftrack.  they also had one Gr II SL and a Gr III platoon leader.   For a 2 person game I would give them a second squad with halftrack and Gr II leader.   The germans are scouting the board starting at the factory; preceding south to the hill; cutting across the road and then back up north.