Merry Christmas and The Bluetails and 18 Mira update

Merry Christmas and Happy Holidays! As stated previously I have much to be thankful for. I hope you do too.
Rich is shooting for a January release for Platoon Forward. Hopefully we all will be moving our platoons forward early next year!!

Played 2 BTH2 battles over the last week so thought I would post them. The scenarios for Squadron Forward are coming along. I have abandonded blinds. They are mainly there to see where the aircraft end up when the shooting starts. Instead I now roll for initial position. Think I am 75% there!

3 elements of 2 pairs with Evans the only veteran. (new sq for me) The other 2 element leaders were Storch ( coarse texan but liked by the sq) and Weaver ( little natural ability but hard work compensated for this. Dad owned half of West Virginia including its senators) 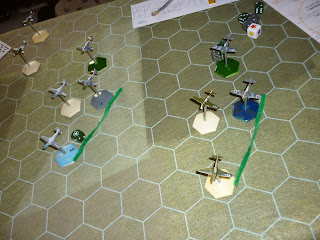 A perfectly executed bounce!
4 FW 190D were behind them. The 4 mustangs started power dives. The 2 wingman shook off their pursers (who were rookies) while Evans and Storch were not as lucky. While Evans tried to figure out what to do next (he was tailed by an ace) he felt rather than heard a huge explosion and felt himself tumbling through the air. Training took over and he pulled the ripcord of his parachute. He would spend the next 5 months trying to figure out what happened while in a Stalag. Storch's mustang also was seen going down in flames but he managed to put out the fire with a power dive and make his way back to England.
Lt Weaver dove to avenge the chaos below losing his wingman in the process. He latched on to the tail of a Dora. Before he could pull the trigger cannon shells hit his mustang. 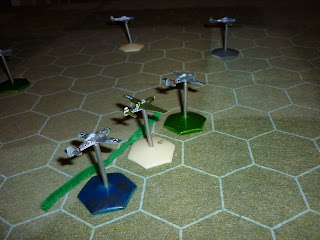 The hunter becomes the hunted
Thoughts of his first kill were replaced with survival. The ace that had got Maj Evans was on his tail! 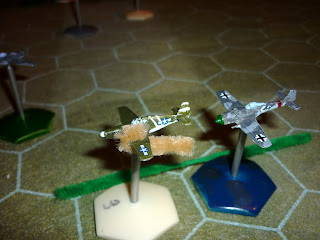 Lt Weaver leaking fuel
(what other color should I use?)
Never a gifted pilot, Weaver barrel rolled and tucked into a tight turn and lost the Jerry. He managed to make it to an emergency field in France.
All in all a disaster for the Bluetails. 1 POW, 4 damaged and they only got 1 shot off.
My 18 Mira had a 3 on 3 clash with some more Falcons.
Characters
Yposminagos Camberous Lazy
Episminias Notaras Careful (Iron constitution)
Sminias Mexlexis Cocky Veteran 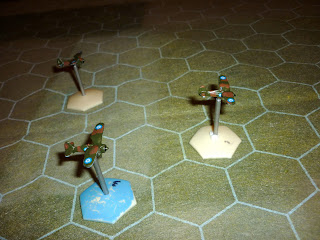 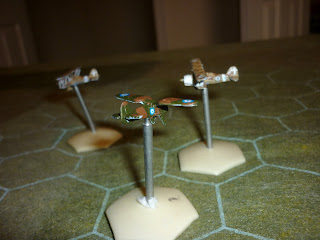 Lt Camberous' first pass
The battle quickly turns into a dogfight with agile aircraft looking for an advantage. MSgt Notaras manages a kill! The Lt is damaged. 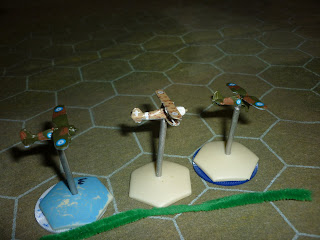 As a Falcon starts to hammer MSgt Notaras
Sgt Mexlexis shows up
Sgt Mexlexis shots a falcon off the tail of MSgt Notaras. Mexlexis, who was unpopular in the squadron, has just won over the senior NCO in a big way!! Both sides disengaged. The greeks claim one and have one damaged; a win!! MSgt Notaras has his skills upgraded to veteran.
Merry Christmas to all and to all a good night!
Joe

Finally painted up my PZL 24s for the Greek Air Force. This is important because now my Italians have someone they can fight with on close to even terms! Plan to add some Bleinhems and MB 151s as well. As stated over Thanksgiving, character campaign for Squadron Forward is done; working on scenarios. This one is intercept.

Despite all the rhetoric, Sminagos [Captain] Andoniou had hoped it wouldn't come to this. Yet yesterday Italian troops had crossed over into Greece. Here he was flying CAP over the Greek naval base. It was unreal. All he men were untested. His right wingman today Antiposminagos [ 2lt] Kellas was one of the worst flyers in the group. Yet as first son of the ambassador to the US he had been passed through flight school. The Italians were known to be good airmen. He prayed Kellas wouldn't get killed and wouldn't cause anyone else to get killed. There, 2 o'clock low. 3 Falcons turning to meet them! 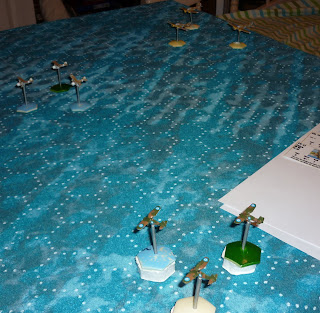 Capt A leads the way!
Capt A also saw some bomber behind. He knew Red flight was coming up. He signaled to Cpl A to go after the bombers. He, with Kellas, would tie up the fighters. 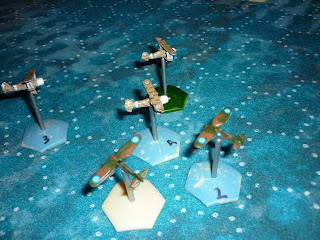 Capt A's initial pass
A falcon crossed in front of him and his 4 guns sounded in his ears. Bullets tore into the wing of the falcon shredding its canvas and breaking spars but the plane flew on. [ Used my damaged table for BTH found in the Lardies special 2 years back. Got wing damage basic speed only]
A couple of turns later and he realized the PZL 24 could not turn with the falcon. He banked left and found himself behind an italian bomber. Lt Kellas could not keep up with the turns and had fallen behind. Capt A started to pound the bomber with rifle caliber bullets to little effect. 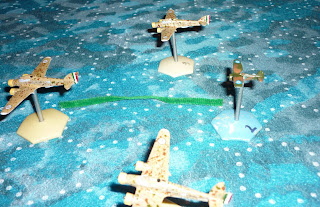 Capt A learning why 20mm cannon are better
than rifle caliber MGs
Meanwhile Cpl A had gotten into trouble. An experience (veteran) Falcon pilot had latched on his tail. All the jinking was not helping. Lt Kellas showed up but couldn't seem to get into position.

Things are looking bad for our Greek NCO!
LT top right.
Sorry for blurry picture!
After his gastank sprung a large leak Cpl A dove for the sea and the falcon pilot gave up the chase. The Italian turned on the other Greek plane, Lt Kellas. Unfortunatly it was no contest. Fortunately for Capt A, Lt Kellas managed to bail out of the stricken fighter and was picked up at the mouth of the harbor.
At this time Red flight finally showed up
Antipaspistis Argiropoulos Generous Average
Sminias Kamperos Evil Average with veteran flying skill
Sminias Mexlexis Egotistical Veteran
They went straight for the bombers who were almost at their IPs. A falcon intercepted Sgt Kamperos and shattered his instruments. Warrent Officer Argiropoulos lined up behind a bomber only to be killed by the rear gunner!
Capt A finally was rewarded when smoke started billowing from the fuselage of the bomber. Seconds later parachutes emerged as the bomber started a downward course. It never made it blowing up several thousand feet above the sea. He moved on to another bomber but this gunner hit him in the gas tank and he had to break off the action. The Italians bombers had an unmolested bomb run. 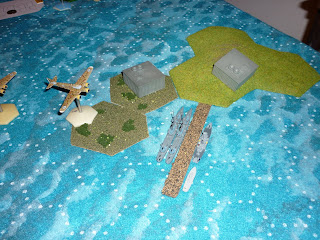 The Bomb run!
Fortunatley for the greeks, the italians did their part in proving that level bombing is a terrible way to hit ships, even when they are in port. All 8 bombers missed!!
Great battle. Numbers and spotting worked out well. Greeks did not fair well but Red flight was delayed. The squadron lost some cool points becasue they got banged up. After the battle the group commander sent the chaplain Fr Nastros down. He is a rather glum fellow who did not help morale out. All planes made it back to base but none are repaired for next mission. That leaves 3 ready with 7 pilots.
Italaians had 3 CR 42s and 9 SM 79s,
Special rules
Both flights are on CAP [ no radar here!] Roll a die. If even blue flight will intercept; if odd red flight. 3 turns after the greeks have spotted the Italians roll a d6. on a 5-6 the other flight shows. Add 1 to the die every turn thereafter.