Finally getting around to posting this.  Second battle with my Rung Sat marines.  If you are just joining, go back and read the last post, we will wait.  Good; now before Lt Peoples joins the squad has to go out and patrol a small island on one of the many rivers.  Contact is not expected and they are "flying the flag" to show the people the government IS in control.  ( sound familiar?)   Capt Vincent suggests that Gunny Sgt Gibson go with the squad.  Gunny agrees and hatches a plan to scare Cpl Lucero straight.  Gunny is "pleasant" so he wants to rehabilitate him.  Sgt Rodriguez is in charge of the mission; Gunny is "just" an advisor. 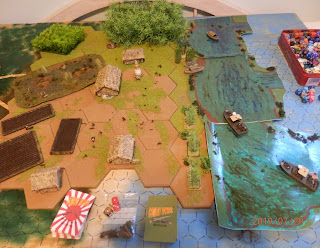 Bum Dum Isle with the Marines approaching in 2 boats.   Huey's on call.  30% chance of an ambush which doesn't occur. 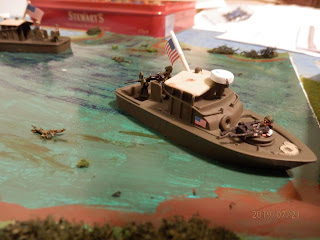 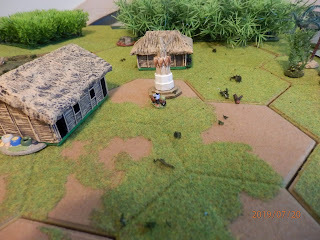 The center point of BD Isle.  A religious marker.  ( rolled up a key building) 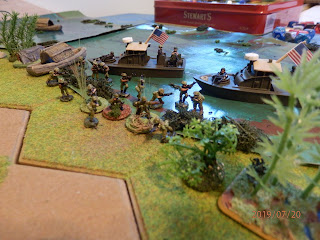 1st squad deploys with attached corpsman.  All is quiet.     3 stripe will take 2nd and 3rd FTs through the village while Gunny takes 1st FT to search the riverbank for bunkers. 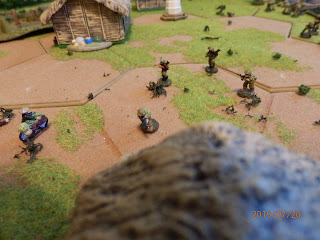 LCpl Riggins' team takes point as the few villagers scatter.  Riggins is glad they don't have to search hooches. 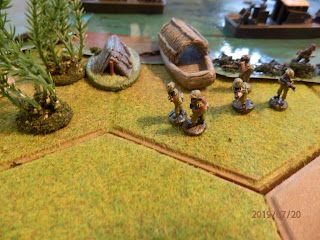 Gunny (lead figure) takes Lucero into the brush to look for bunkers and instructs the rest of the team to check out the boat and netting.  The team thought they heard something but wasn't sure.  When they catch up with Gunny Lucero is badly bruised.  Gunny explains he tripped a VC trap and was slammed into a tree.  LCpl Lucero concurs. 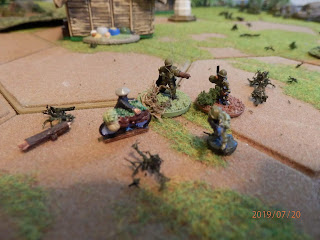 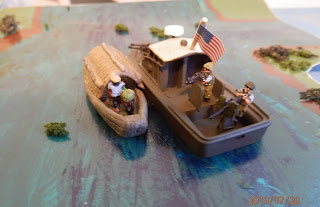 One of the PBRs stops a local boat with "unlikely" chance of anything occurring and nothing does. 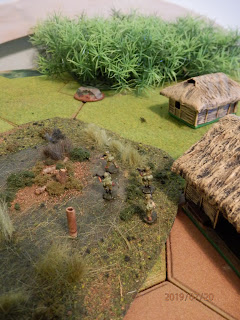 Shots open up from the jungle ahead of them and a LMG opens up from a hooch behind them leaving... 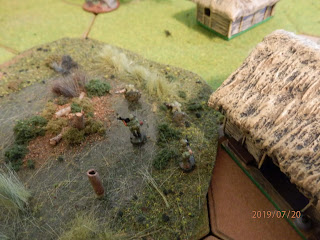 2 boys down in the muck.  Riggins drags them into a nearby hooch.  1 is obviously KIA. 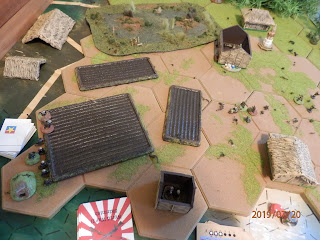 The scene mid game.  3rd FT is hold up in the hooch by the swamp.  Unknown VC ahead of them in the jungle.  2nd FT + 3 stripe mid board with civi.   VC LMG bottom of board and VC squad lower left ( having used a tunnel to move from jungle to rice paddy.) 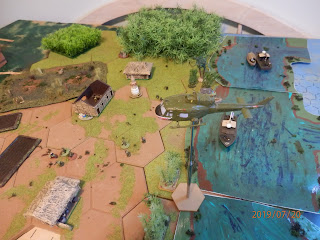 Random event brings the on call huey on.  A true air, land and sea battle now!
Huey fires at the VC in the paddy as he doesn't need identification for them.  Results somewhat disappointing.  [ anyone have FoF stats for a vietnam huey?] No casualties but they do break the squad.    Injun Joe has very limited targets due to LOS restrictions.  1st squad is essentially on its own. 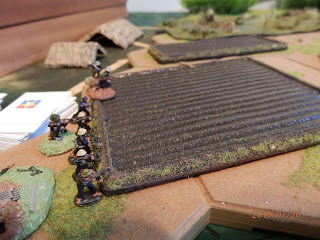 VC squad before the huey rains down rockets! 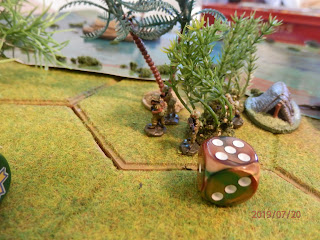 Gunny and 1st FT lay down fire into the jungle. 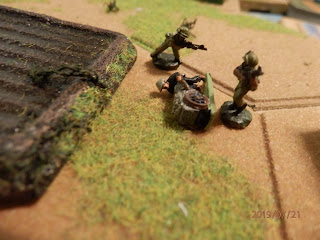 2nd FT drives off the LMG ( 1 body found) but not before a villager sustains a WIA. 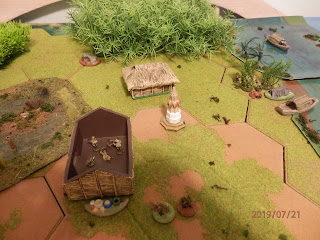 Sustained fire from the rest of the marines results in a standoff with the forces in the jungle but LCpl Riggins is KIA.  After several minutes, the VC wisely break off contact.

Great mission that really felt like a story.   This squad certainly has a lot of character!   I called the mission a draw.  We held the battlefield but didn't run Charlie off.  We had 2 KIA and the VC had 4.  There was 1 civilian WIA.  Not sure this battle convinced the local population the the government was in control.     Post battle---where to begin?

Cpl Lucero responds positively to Gunny's coaching and the FT accepts him back.  Morale in the squad drops however after 2 draw missions and 2 KIAs.  Confidence in 3 stripe is at -2 and his leadership drops to below average. Lt Peoples shows up and he will lead the next mission.  Unfortunately I rolled him up and he is "haughty" so might not be what the squad needs right now. Capt Vincent decides he can't leave 3rd FT without a NCO so they pull one from battalion.  Cpl Jonas joins the platoon and will act as ASL instead of Cpl Lucero.  So I rolled him up and he must be good at pushing paper!   He is glum and only cares about making rank.  He is also a below average leader.  Looks like Gunny still has his work cut out for him!


Posted by FlightDoc at 6:23 PM No comments:

Injun Joe, Three stripe Rodriguez and the forrest of assassins

Sorry no posts in a while.  Real life with people's health issues is taking priority right now.    Bought a pier and some gun pits from I-94 enterprises and have been pleased.  Will show those in the next few weeks.  For today wanted to finally get my patrol boats on the table that I painted up 7 months ago!  Decided to us a new marine platoon that I rolled up for Hue but haven't used yet.

Lt Roer explained the concept to Sgt Rodriguez and Sgt Salvatore.  The VC have been using the Rung Sat region as a hide out since the French were here.  The Navy and ARVIN is trying to put them off base to show them we can get to them if we want.  The patrol boats have been taking fire from this one village so they are going to be a anvil and we are going to come in and hammer a couple of bunkers!  Speed will be important as we have to get to Charlie before he can leave with his heavy weapons.  We will come up to the village; 1st squad will break right to the river and left will break left through the buildings to the river. 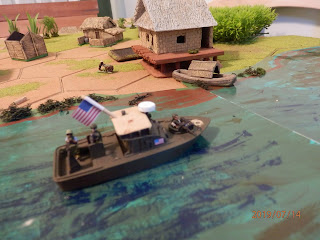 1st of the 2 boat section with Injun Joe manning the twin 50s. 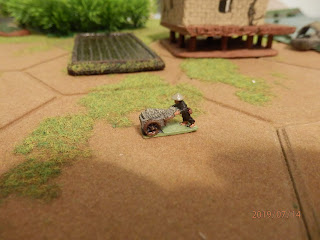 One of my Peter Pig Civilians.

Injun Joe was scanning the shoreline.  He was taking deep breaths of the hot humid air.  The boat crew swore he could smell an ambush 9 times out of 10. 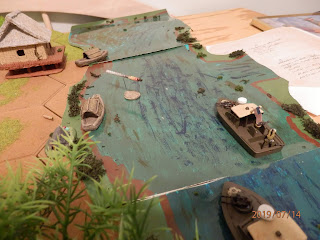 From the treeline and an elevated hootch rockets and small arms open up on both boats!     One of the rear gunners goes down with a head wound in Joe's boat but everyone else returns fire.  The Navy crews never actually see bunkers but do see the amount of fire slacken after about 10 minutes of fire.
Meanwhile...

In the amtrack Lt Roer is notified that the boats have made contact.  He gives the order to move out and tells both squads to move out quickly according to plan.  He will stay back with the MMG and bazooka to direct the battle. 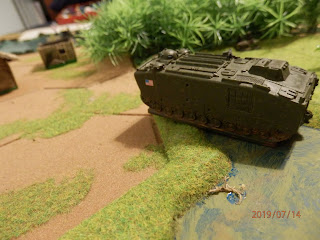 The Amtrack moves through the swamp towards the small hamlet. 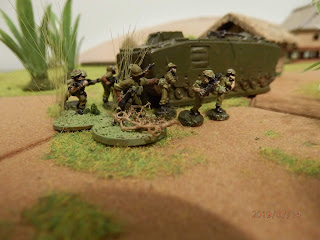 1st squad leaps out and moves towards the river.  Three stripe issuing orders. 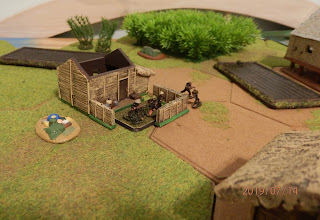 A random reinforcement brings a VC squad up into the village.  Must have come to the sound of guns. 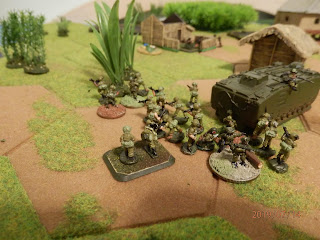 2nd squad + platoon HQ out of the amtrack.  1st FT to the trees while Sgt Salvatore moves towards the buildings.  They begin to take fire from a hooch 30 yards away.  Lt Roer turns to say something to the corpsman when... 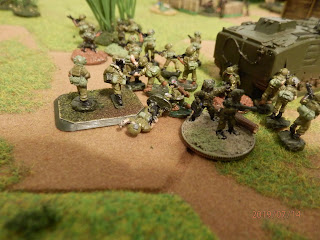 He crumples.   The RTO stands there in shock.

Meanwhile 1st squad is pushing towards the river.  One of LCPL Riggins men steps on a pungi stick but otherwise resistance is moderate. 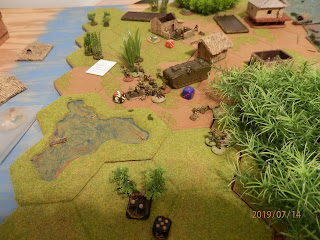 is caught in a crossfire as a VC MMG sets up behind the amtrack.   Fortunately marine training and morale carries the day and they KO the MMG and drive off the VC squad with only 1 WIA. 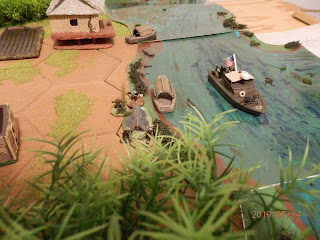 A VC with a captured bazooka pops up to take a shot at a boat but fails and Sgt Rodriguez drives off the team.

Then suddenly there is silence.   The village is searched and 2 bunkers found but no heavy weapons save the 1 MMG.    Certainly not worth the life of Lt Roer who died in the amtrack.
Quick, fierce battle that I called a draw.   US casualties were light with 1 KIA, 2 WIA and 1 walking wounded.  VC had 10 KIA/serious wounded but lost no recoiless rockets/bazookas or RPGs.

Sgt Rodriguez takes over the platoon temporarily and manages to upset both of his fellow squad leaders with his haughty " I'm in charge" style.  Thus Sgt Salvatore now dislikes him.  Further things have gone missing from both the squad and the rest of the platoon.  Three stripe suspects Cpl Lucero but has no hard evidence.  Capt Vincent, the company CO, is big into integrity so is upset that Rodriguez hasn't solved this yet.  Thus 1st platoon does get a new LT and he is told to solve the pilfering problem.  Gunny Sgt Gibson has been tasked to help him.  Amazingly the morale of the platoon remains high.   We will see where this all goes.


Posted by FlightDoc at 6:18 PM No comments: