Costly day for the USAAF

Sorry it has been a month since any postings. Had a family reunion and started a new job which has kept me busy. Played several small TW&T games and BTH2 games but took few to no pictures. Did play one B-17 raid this weekend though...

The men of Bomber squadron 222 "Iron Men" shuffled into the briefing hut. Target Kiel. Ingress over land to fool Jerry and egress over water; brilliant thinking?!?! Worst news was BS 222 was to be the low squadron for the group today. Only good news was plenty of P-51s and a smattering of P-47s to cover.

Germans spotted US first and came in undetected. P47s trailing and P-51s echeloned to the left of the formation. 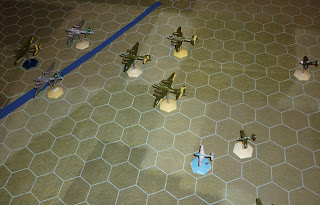 Unfortunatly the first sign of trouble was when Sgt Singleton, the tail gunner of Miss Jane, called out bandits 6 o'clock high closing in fast! 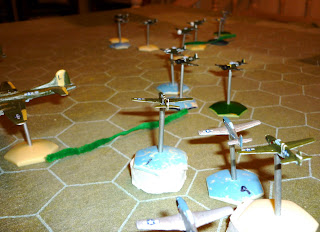 Embarresed P-51s come roaring in!
Miss Jane took enough wing damage that she fell out of formation. The P-51s drove 1 of the armored attackers off but Jane was now in trouble. She next lost her top turret and waist gunner. Finally her number 3 engine exploded; 4 parachutes were counted.
The other 3 FW 190s fell upon Queen of the Skies. Their cannon were too much and she succumbed before fighters could show up with 8 parachutes counted. They then moved onto Return Ticket. Cannon fire also managed to knock her out of formation. But by this time the P-51s were making things too hot for the FW 190s and they decided 2 bombers was good enough for today and left. 4 of the 6 FW 190As had significant damage but none were shot down. 1 ME 109K fell to a P-47s guns. No US fighters were lost. On the bomb run Dangerous Curves took a direct hit into the gas tank and exploded with no survivors. The 3 shaken survivors of 222 scored no hits on the harbor. A costly day for the USAAF!
Fun game but pretty one sided. The bounce by the germans set the stage. I also upgraded the FW 190A8 to ROB 3. Will play several more games to see it this works. I used a modified damaged table based on my variant damage table for BTH found in a TFL special. I also used characteristics for fighters that I hope to pen in a future article.
Below are just a smattering of other pictures I have taken receintly 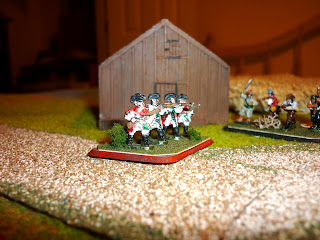 Had 6 IL-2s bomb some bunkers 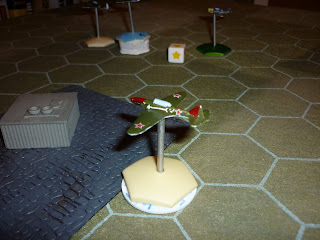 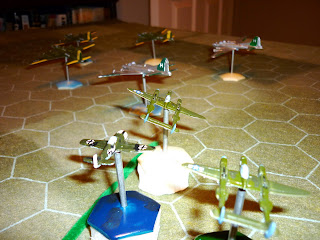 Earlier escort mission; this one in Tunisia.
All 4 P-38s shot down!
Thanks!
Enjoy
Joe


Posted by FlightDoc at 6:39 PM No comments: