Hope everyone is gearing up for the holidays. I would also like to thank WI for publishing my essay on all of us wargamers getting along.

As most of you know I am always working on several projects in parallel.  Today I would like to report on my SAGA variant which hopefully will be appearing in WI soon and my campaign rules " Warlord Forward" ( not linked to SAGA but can be used with them obviously).  The variant is done and plays well.  WF is in playtest.  I have the basic scenarios but am trying to get the force levels right and am testing the events.

Thrydwulf knew what he must do.  A Welsh raid had stripped Br Cearl's church of all it's gold.  Br Cearl had learned of it's whereabouts and had pleaded with Thrydwulf to get it back "In the Name of God."   He gathered his forces and planned a dawn raid.

Unplesantries were exchanged including questions about parent's marital status.  Then Raldulf challenged any Welshman to beat him in a duel. 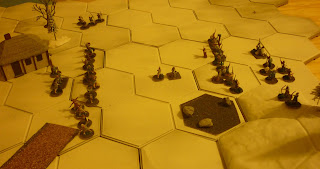 The duel begins!!!
This also shows the starting positions of the forces.
Welsh on the left, Saxons on the right
Each figure represents 2 men
Raldulf fought with skill but so did his opponent and at the end both men were down with no clear victor.
The horn sounded and the saxon line advanced under a hail of arrows and javalins that took their evil toil.  The left advanced faster than the right (where Janurl was) and crashed into the welsh line. 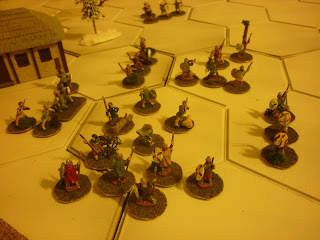 A melee ensues
Heavy fighting errupts along the line with both sides morale holding.  The Welsh hold their few Teulu out of the fight while Thyrdwulf commits his huscarls to break the welsh. 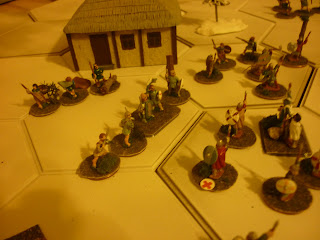 Thrydwulf himself comes up to break the Welsh center!
But wait, the Welsh warlord forms a shieldwall with his Teulu
as a last line of defense.
(Teulu are the only Welsh that can form shield walls in my variant)
Thrydwulf laughs out loud, "These welsh are so stupid." He crashes into the welsh right avoiding the shield wall.
But down the road is that hoofbeats on the wind? 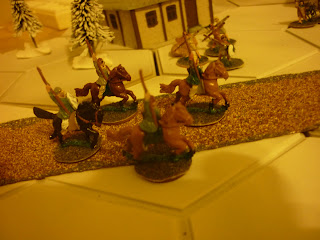 Fresh mounted warriors assault the saxons as they move around the sheild wall. 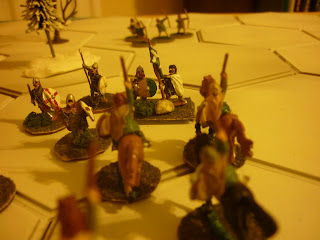 Thyrydwulf (next to his banner) and his men
slay all the riders without loss! 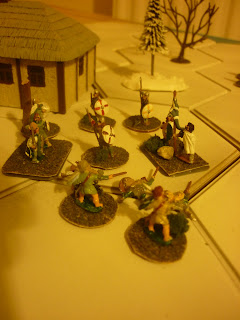 The Teulu break sheildwall and charge
with a yell to avenge their comerades
Men fall on both sides with neither side yielding the field as morale and bloodlust remains high but the saxons are outnumbered! 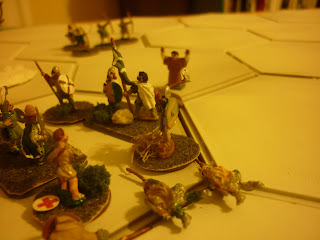 Janurl shows up (center) to add his welcome axe
to the fray and Br Crearl adds prayers to the Almighty
(note the welsh archers in the background)
As the last Teulu falls their cowardly warlord retreats towards some (7) Priodaur.   Thrydwulf looks around.  He has 2 huscarls and Janurl left, Lord be Praised!
But then, as the Lord giveth He taketh away.   A cloud of arrows appear from behind and his two faithful huscarls are struck down! He does not know what he has done to anger the Lord but he must admit defeat.  He can not defeat 7 Priodaur, the oposing warlord and walk the arrow gaunlet today with just his Lt.
Great game and I thought I was going to have an epic ending until the saxons got boxed by the bowmen.  The variant rules are designed to add a little more on board strategy to a great game system without adding a lot of rules or time.  It also adds some "rugby scrum" type of melee to the game. WF is shaping up well but I think the system gave the welsh too much stuff this time.
Post game Thrydwulf's reputation goes down by 2 and his Ceorls have lost some confidence in his abilities. ( -1 morale)  Interestingly Br Cearl is not mad but appreciated all the Thrydwulf did.  In Br Cearl's telling of Thrydwulf's heroic fight 6 more Huscarls have actually joined the cause!
For those of you that want to recreate this fight using your system here is what WF generated for the Welsh.   The gold is in the house.  Get it and leave the board.
1 warlord
6 Teulu
24 Priiodaur   ( 8 come in as reinforcements mounted on a roll of 5,6)
8 Bonnedig
Enjoy
Joe﻿
﻿