The Kicking Mules; an example of post game Squadron Forward

Played a game of Squadron Forward yesterday using my P-38 squadron, Kicking Mules.  Thought this would prove to be a good example of post action for SF.  This is my 3rd mission with this squadron and they have not done much.  Their biggest problem is their inexperience (as you would expect coming from the states to Tunisia).  ! vet in the whole bunch.  They have won one, lost one but not downed a plane yet.
We roll up a patrol which is always fun.  I personally never let the CO and XO fly the same mission in case they both get boxed!  This time the XO, Zap McGruder will lead a flight of 4. We pick Lt Zuckerman because we are trying to get him upgraded to element lead quickly.  Lewis will lead the other flight with Lucky Schlick the wingman.   The characters are:
Capt Zap McGruder  Foolhardy/wealth
Lt   Zuckerman            Cheap/ Religion    Rookie

Pre game Lt Lewis wakes up with a headcold and the doc DNIFs him.   We quickly sub in 2Lt Chuck Carls who although a 2Lt and average has incredible flying skill. 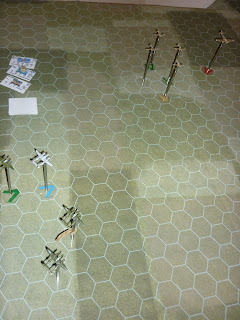 Should make for a challenging game for the mules!   I have no idea what photo planes the Italians used so decide on a SM 79.
Zap starts to work around towards the rear and gets 2/3rds before he is spotted.  He and Zuckerman will now take the bomber (they don't know it is recon) While Lewis will try to keep the fighters busy. 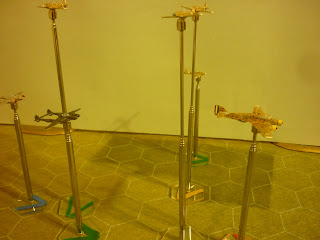 Zap lines up his shot!

Zap misses the slow moving bomber in his first pass and a melee ensues.   It is a challange for the mules as the MC 202 is almost as fast as their mounts and turns much better. 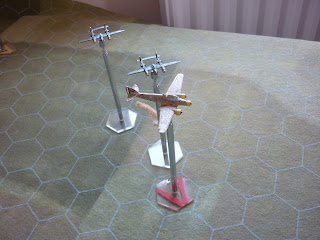 Carls lines up his shot!

2Lt Carls gets a deflection shot and makes it count; sending the bomber to earth in a ball of flame!  The squadron's first kill.

Next turn enemy reinforcemnts appear.  I normally like to use differnt fighters than on the table for variety.   I roll up ME 109Fs.  I decided I would like to keep this an Italian show so substitue an element of MC 200s.   I roll up where they are to enter and get punked by my own game system!  They enter right behind element one! 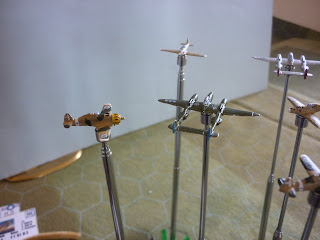 Who designed these rules?!

﻿
﻿
A turn later  a MC 200 is hammering at Lt Zuckerman's wing which snaps off.  A parachute is spotted.

Now it is 3 P-38s against 6 Italian fighters over Italian territory.  2Lts Carls and Schick are ready to leave.  Capt Zap, being foolhardy, is not ready yet.   However, the P-38s stay fast and can not come close to any MCs except one time when Zap manages to damage the Italian leader.    It is time to go.

No planes are damaged so landing is easy.I declare this mission a win for the mules.  I reason we achieved the main purpose and while we did lose a fighter, the bomber was heavily guarded.  Regarding glory, we shot down a bobmer, lost a fighter, faced Italians but they were good ones and they had us 1:1 or better the whole time and we did not run away.   I say "unlikely" we gain a glory point and we do not.
We roll to determine Zuckerman's fate and he becomes a POW.  We can only hope it is with the Italians.  Next we roll for a replacement pilot and plane.  Unfortunalty this is modified by our group commander Col Green who doesn't like us because until today we had not downed a plane.   We get no replacements today.
We had 2 planes with minor damage form last battle.  We get to roll to see if those are fixed adding 1 because there has been another mission completed.   Both planes are fixed and ready to go.
Now we go to events.    The first couple of missions I automatically introduce a NPC so there are a couple to chose from if needed.   today we introduce Doc McCormick.  He is a cheapskate but he likes the squadron.    Next I will add a freeform event.   I think it is likely that 2Lt Carls will be upgraded to veteran status because he shot down a plane and he already has the flying demon skill.  We pass this roll and now have our second Veteran in the squadron!   My event is someone goes DNIF.  Normally I would roll for one of the pilots that participated in the mission.  This time I will use Lt Lewis who went DNIF this morning.  He goes DNIF for 4 missions but Doc McCormick will help us out with this and it drops to 3; thanks doc!  For next mission I will chose a freeform event to try to promote 2Lt Carls to LT and have him take Zukerman's place.  The squadron will know by then he is not coming back. But will Col Green buy it?
Great mission and a great squadron is now shaping up with 2Lt Carls now showing some leadership in the Squadron.  Maj Bunker needs to nurture this.  Will Capt McGruder nuture this or become jealous?
Hopefully this gives you some idea of how to use the post game events of Squadron Forward to drive your story forward.  This is what I mean by the phrase, the charts are the 90% solution 90% of the time."   Feel free to deviate a little to move the story forward but don't change dramatically.  Many of those things that happen that you are disappointed about actually end up being quite interesting later! 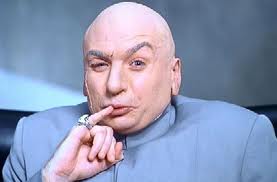 Yes it is true!!  Squadron Forward was finally published yesterday and is available for a mere 8 pounds from the Too Fat Lardies website.  (If I knew how to link I would do that.)  For the rest of us that is about $14.  The post below describes the product.  Also read the Black Rams from April which is a good walk through of the rules.
If you have any questions (because this is a unique product) please ask.  Ask here or on TMP or the Lardies Yahoo group.  Three questions often come up that I will answer now.
1.  Yes this is compatible with ALL tactical rule sets.  That is because it is writen generically such as the pilot ability will be "crack shot".  You decide what that is in your favortie rule set.  In BTH that would be adding 2 dice when shooting.
2.  No it is not a stand alone rule set.  You will need a tactical rule set to go with this.  This is a campaign generator that bolts on to your rules.
3.  Yes this is very solitare friendly.  I play 90% solitaire and this is how I play my games.  It will set up a scenario for you where you don't know what you are facing until you have determined your forces.  It will then give you starting positions for the aircraft.
Any other questions please ask!  I will feel bad if someone buys it and they don't like it. 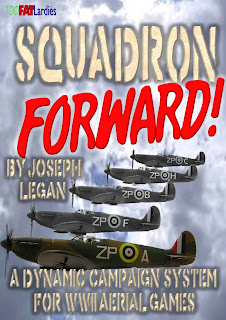 Squadron Forward should be relased this coming week!
As you can see Rich has done a bang up job on the artwork with many international drawings.
There are the usual three parts just like Platoon Forward.  Part One is similar actually except your pilots can have additional skills.  Part Two consists of 5 basic scenarios which expand to 8 basic situations.  Just like Platoon Forward, you don't pick your mission, it is handed to you.  Unlike PF, appendix 1 contains mission tables that break the war down by theater,  combatant, year and sometimes aircraft.  After all, a ME 109s missions were far different in 1940 than they were in 1945!
Part Three contains the in game and post game tables you need to test your men in battle and out.  Squadron Forward introduces some minimal resource management as you keep track of the number of pilots you have ready and the number of planes on the line.  Finally we have two more appendices.  Appendix 2 gives you tables for enemy and friendly fighter aircraft by theater and year for the entire war.   If the scenario card says you meet 4 enemy fighters you move to appendix 2 and roll to see what you are gonna face!  There are a couple of "theaters" not there like Syria and Norway but the vast majority are included.  [Greece is in there for you Chris]  If your theater is not in there e-mail me and we can talk about putting together a table.  Appendix 3 comes to us courtesy of Brian and adds medals to the Forward system.  Your pilot just got his 5th kill and you think he should get a medal?  I think the Wing Commander doesn't like him since he caused that ruckus in town last week.  The paperwork might get lost...
If you liked Platoon Forward  you will like Squadron Forward.  If you hated Platoon Forward please don't buy Squadron Forward. If you are a solitaire gamer then Squadron Forward will set up the battle for you.  It is not a AI programed opponenet however.   If you want to add a campaign element to your air combat games without a lot of fuss then either ask on your favorite forum or e-mail me here, TMP or the Lardies group about Squadron Forward and I will answer any questions you have.  Once you are satisfied and only then, buy it.

I really hope you guys enjoy it!