Happy Thanksgiving to all!  I have been truly blessed and have many things to be thankful for.  Here is hoping you are as well.  I managed to give $250 to the local food bank for thanksgiving due to your support of all the Forward products, thank you.  It is certainly needed and was welcomed.

First note is Flotilla Forward should be done next week.  I had it done but Chris Stoesen has really made it look much sharper and more professional.  Thanks Chris.  He is a very talented guy with many scenario books for all types of games.  You can check out his blog at cstosen@blogspot.com

I have been playing a fair amount of 1980s jet combat so was inspired to use my West German Panzer Grenadier platoon.  This guys are fun and Sgt Lachman is a great leader with his squad firmly behind him.  I realize I haven't used them since Sept 2018! Man time flies. You can read about their last mission there on Sept 5th.

Lt Weiss was excited as he sat Sgt Lackman and Sgt Blaum down.  Capt Zeiss has just given us a very important mission.  As you know the front has not stabilized, we are to go and rescue the mayor!  "great", thought Lachman, this sounds dangerous.  The Lt continued, " Our platoon is to race to city hall and rescue the mayor and his wife and get  them back to safety before the russians take over the city and find them." 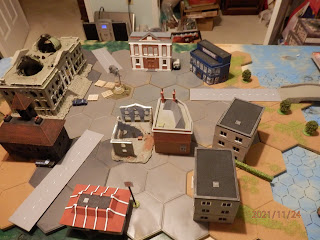 City hall and environs.  Platoon will enter from the right across the bridge and will leave the same way.  Mayor will be outside as the hall is not safe inside secondary to damage.  Enemy's entrance is unknown. 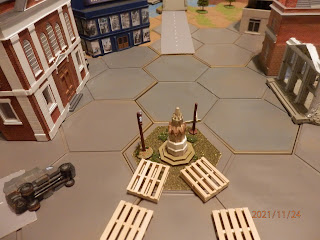 Looking at the square.  Barricades  set up by the police. 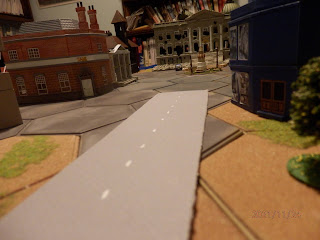 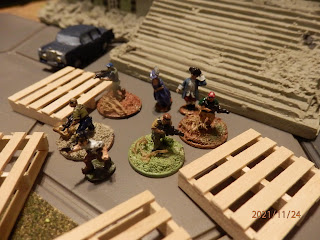 The mayor, wife and their bodyguards outside city hall.  The mayor and his wife were shooting a commercial for the city when the invasion interrupted it; hence their attire.

Lt Weiss briefs his NCOs on the plan.  "Get in and get out"!  The scenario is a "special mission" I rolled up.  It is a variation of the Encounter scenario.  The Westies get a 2 turn head start to make it to the Rathaus. 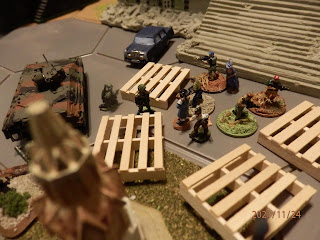 Lt Weiss greets the Mayor and tells them to board the Marder.  3 guards will board the 3rd Marder while... 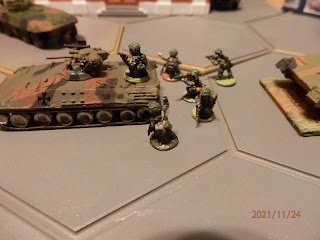 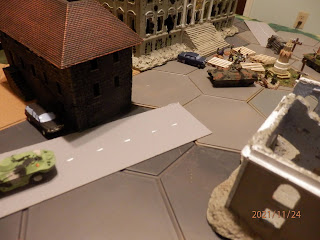 As the mayor and his wife enter the marder shooting starts... 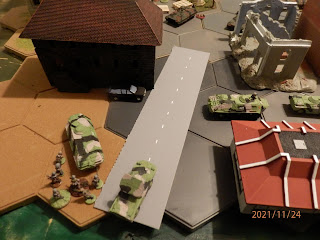 The Easties, guessing they have missed the mayor, move fast.  The BDRM turns right followed by 1st squad after it hits the westies in the Marder hatch and pins the crew.  2nd squad offloads and a BDRM -AT prepares to fire. 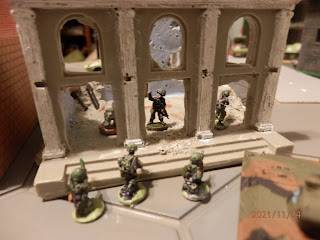 Sgt Lachman moves quickly as well into the damaged bank where someone across the street caught this dramatic pose. 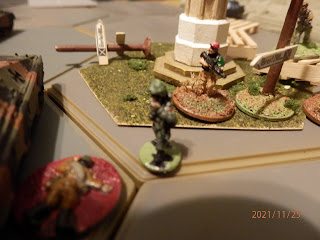 Meanwhile the pinned Marder frantically backs away from the BDRM-AT as Lt Weiss rushes over to rally the crew.  Fortunately, Sgt Lachman's Marder takes out the BDRM-AT.  [thought I had a picture of that.] 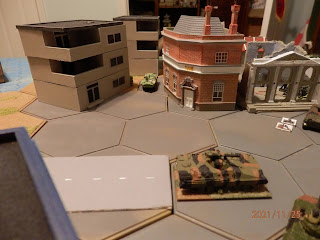 These Easties are all over! 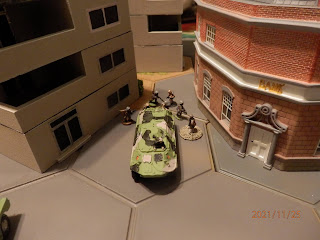 East German infantry unloading along the path home for our Panzergrenadiers.  While... 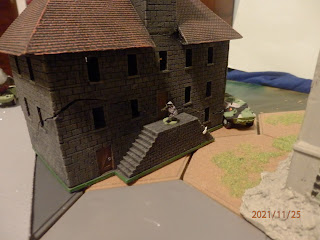 Out of the old Rathaus a RPG gunner appears.  Sgt Lachman's squad takes care of him quickly. Lt Weiss shouts over for Sgt Lachman to saddle up and move out. 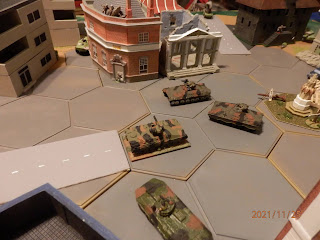 Time to go!   Sgt Lachman, followed by Lt Weis [ with the mayor] then Sgt Blaum and finally the Luchs.  Only problem is a East German squad set up in the bank. Sgt Blaum [ in the center] will provide covering fire.  Sgt Lachman takes off with bullets splattering the sides. 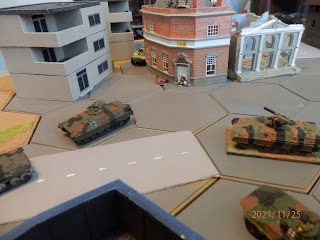 All going according to plan as Blaum pins down the Easties. 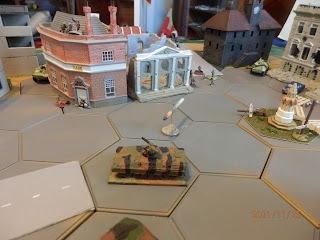 Suddenly a RPG comes from the right.  Eastie 2nd squad is moving up from the Rathaus to the bank... 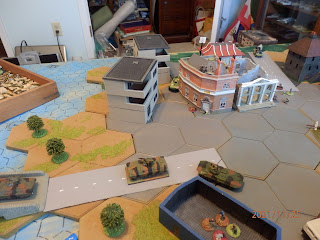 Things appear to be going according to plan as the Luch starts to move...  [ figures in the blue building are the 3 bodyguards.  They broke under fire entering the Marder and retreated into Karstadt.  Sgt Blaum wasn't too worried about them. 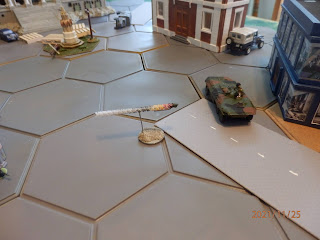 The east german squad in the bank rallies and fires 1 more RPG at the retreating armored car...

It hits the top of the turret killing Sgt Pellman and destroying the gun. Miraculously the crew passes their morale check and keeps driving over the bridge to safety!

Fun game and a big win for the platoon.  Mayor rescued and 1 KIA and 1 WIA.  Capt Weiss is very impressed and the mayor grateful.  Lt Weiss misses his leadership roll so is still poor.  He will be away from the platoon for the next mission taking care of the mayor.

Had the East Germans or Russians had BMPs it would have been a much harder battle.  When I found out about this rescue I asked Jonathan Lachman why he hadn't mentioned it in his book.  " Not much to tell really.  We went in and picked up a big wig and drove out.  Compared to everything else we went through didn't seem interesting."

Posted by FlightDoc at 12:06 PM No comments:

It has been awhile.  I have just transitioned from full time to semi retired so much is happening.  The good news here is I have time to format Flotilla Forward. It is done except for a QRS and the appendix.  Will send it out for proofreading ( Chris am hoping you will do me the honors again) and then post it.  As always, all profits will do to my local food bank; just in time for the holidays.  The scenarios are playtested but after working on it for a week I wanted to play a quick game.

For those of you familiar with my land and air games this is between the two.  It has blinds like PF but there is resource management like SF.  Anyway I rolled up a dogboat captain I will follow in the channel.  Gentlemen, I introduce you to Lt Phillips!  He is from East Anglia and was a well known Yachtsman before the war.  Due to his fame he gets +1 to all his interactions.  He is a cheery fellow (+1 again) and is concerned about position so he wants to move up in rank and responsibility.  He and his crew are average so obviously haven't seen much action yet, perfect for us starting out.  You normally roll up a mission but I chose rescue because I wanted a short battle.

In Flotilla Forward you roll up environmental conditions as these were key in small boat actions.  We got some chop [Beaufort 4], visibility about a mile and no fog/squalls.  This is good as we are looking for a boat crew to rescue. 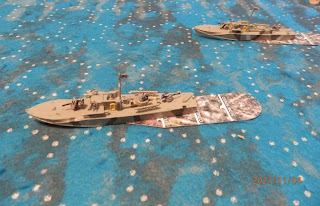 Lt Phillips is cruising the channel when he gets a distress call over the wireless.  A lone vosper is sinking and needs help.  [ 66% chance a small boat needs help.] 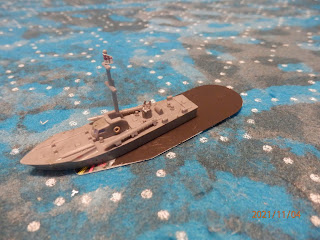 Lt Phillips changes course and goes to help.  This should look good on the AAR he thinks.

Phillips was fortunate to sight the vosper at almost a mile and steer towards it.  The plan was he would pull up along side and determine wheither to take off the crew or tow while #2 circled and looked for Jerry.  The scenario generated 2 enemy blinds for this mission.  Both would turn out to be S-38 boats and they were lagging 3 turns behind the brits in their search.

Situation shortly before things got hairy. 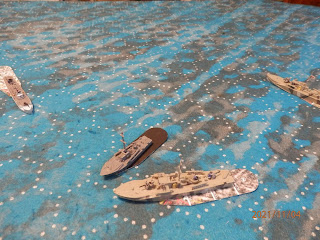 As Phillips pulls up along side the Vosper they shout that an E-boat is coming in about 200 yards away.  [ This battle the vosper had no weapons functioning.]  #2 also spots the E-boat.  This just got a lot harder thinks Lt Phillips... 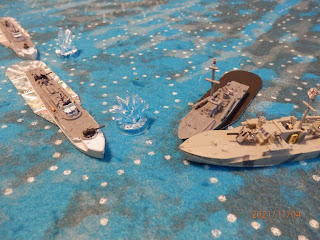 All boats start plugging away at each other as the night lights up!  Clearly towing is out of the question.  The men from the Vosper come over quickly and the charges are set but this still takes time.  Lt Phillips boat is literally a sitting duck as the 2 E-Boats pass and move to port continuing to pour fire onto her.  #2 tries to support but he is too far away.

Lt Phillips is just about to start moving when an incendiary cuts a fuel line.  [ this isn't in Flotilla Forward but in Crueler Seas].  Now a diesel boat has a 16% chance of catching fire but the poor dog boat is 50%.  "Crap!  Now we have to fight this fire."   It is a losing battle... 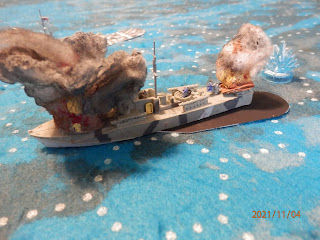 The boat rapidly become engulfed in flames.  The men from the Vosper leave a stricken boat for the second time that night.  Fortunatly a Flower class ship arrives and the E-boats slink into the night.  Lt Phillips and all the crew are rescued.

Great battle that turned on 1 critical hit.  Lt Philips almost became a hero.  Next time I can talk about post battle and about how blinds are managed.

Posted by FlightDoc at 7:22 AM No comments: