Finished up my PBR boats for my brown water navy.  Considering what to do for my 2 french ships.  In the meantime I started building and painting up 3 East German T-55s.  I also have 2 squads of infantry complete with BTR-60s and a BDRM.  I tried to replicate the cool 3 color camo scheme that battlefront has on the team yankee website but didn't do a great job.  That said the results had grown on me so I thought I would get them on the table.  I decided I wanted a very small battle due to time constraints so went with a meeting engagement.  Rolled up the board but picked the forces otherwise.

FIRST DAY OF THE WAR

While Nato planners had written off Berlin they did attempt at least a token effort to keep the highway to the city open.  This involved a spoiling attack into East German territory that ran right into elements of the NVA.   As the mobile battle developed it became clear that a small hill near the autobahn and the town near it would be important to have...

SSgt Throckmorton was tasked to take two squads into town  and secure the hill to be used as a TOW sight and secure the village against possible NVA attack.
US forces  8/8   initative d10
2 US mech squads w Bradleys plus 1 HUMVEE/TOW
1 Apache on call 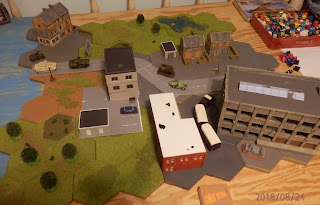 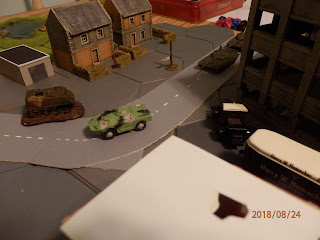 NVA enter the town going for the hill.  Don't have my East German tanks painted up yet so had to sub in Russian ones. 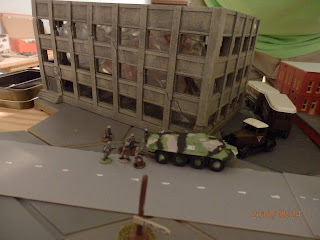 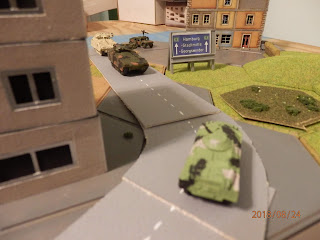 What the ...!?!?!??!?!?!?!
Both sides too startled to score any hits.   BDRM retreats.  2nd Bradley moves towards appartment complex and humvee moves towards hill.


The humvee never makes it to the hill.  So the German tanks move forward just as the Apache show up... 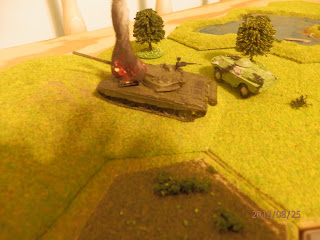 Score one for army aviation!!!!

Surprisingly the East Germans do a better job of reacting to the fluid situation.  D6 initative 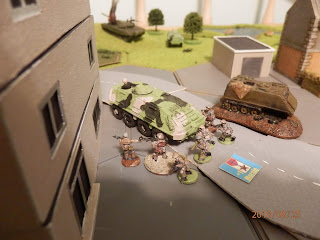 1st squad unloads and enters the apartment complex.  2 points for the Democratic Republic! 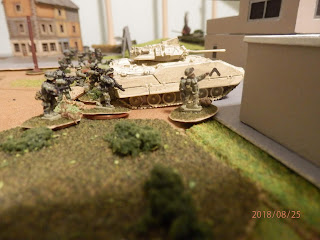 2nd squad finally stops smoking and gets out of the Bradley. 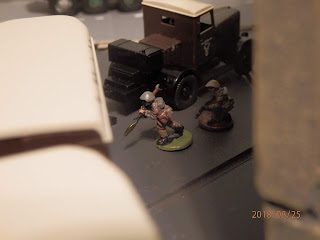 2nd squad moves up through the factory complex.  ( Who are these guys!) 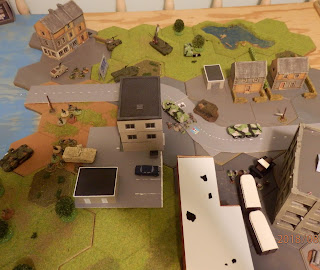 Mid battle.   Things are not good for the US.  No one controls the hill.  NVA have appartments and factory.  2nd NVA squad moving up towards parking lot.

Then I drew a very cool, very gamey random event.  Rounds cause a building to catch fire, US player's choice.  Do I put the apartment on fire?  I can't control it then but neither can the Germans. I decide to place it on fire and try to go around it toward the factory. 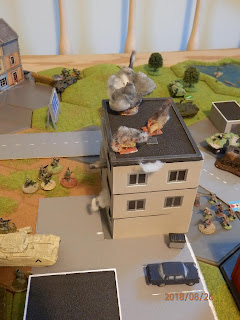 A ruptured gas line in the building catches fire!  NVA troops retreat out the back. 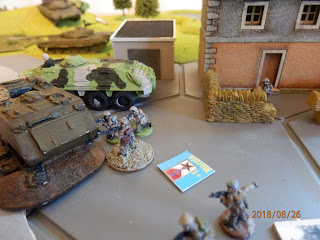 They take up positions across the street. 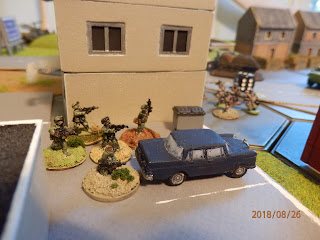 SSgt Throckmorton moves his men past the burning building.   They run into a gun toting BTR 60.  1 KIA and 1 serious wound.

Just when you thought things couldn't get any worse... 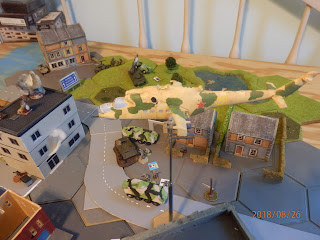 In a sign of socialist solidarity a Russian Hind shows up.  My house rules mean they immediately look for armor as it is easy to identify.  ( easier than troops.) 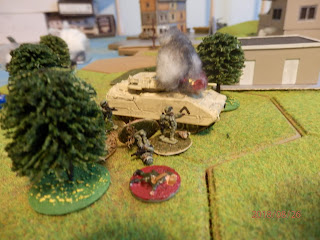 A Bradley is destroyed and 2nd squad pinned by fire from the East Germans.   With only 1 immobilized Bradley left, 4 casualties and no objectives gained SSgt Throckmorten signals retreat.


Fun battle that played fast.  The US was soundly defeated.  I set it up so the US were better led ( house rules) so they should have reacted more often and faster though they had fewer assets.  This did not play out.   They consistently "missed" their move rolls and lost initiative and reaction die rolls.  Also the Apache stayed on the board for only 1 turn.   ( I TQ after each turn.)  It would be interesting to play this out again and see if the outcome would be different.  I still think the forces evenly matched despite the outcome.    If you want to try it the NVA had
8/8  initative d6
2 mech squads with BTR 60s  All poor ( Gr0) leaders.
1 BDRM Avg leader
2 T-55As    1 Avg/ 1 Poor

Actually wanted to take a break from the Brown Water Navy and Vietnam last weekend.  Wanted something short and different.  Found a rescue scenario in "Day of the Rangers" scenario book.  It is the first scenario book of theirs I bought ( actually paid full price, such a newbie) and is only "okay" because the scenarios are not particularly varied.  That said, they have a hypothetical rescue mission of a downed helo pilot.   So no  Platoon Forward today( I normally can't help it- it is what I actually play!)  I played this one straight out of the book! 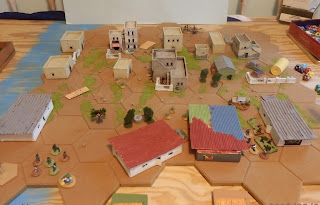 Mogadishu.  target building in the center.  Nice small board

The US gets 2 sticks of rangers and 8 deltas.   They have to rescue the pilot and evac him out by turn 10.   They lose points for casualties of US personal and civilians. 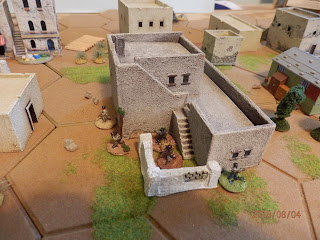 Target building up close.  Durant is inside with 6 bad guys. 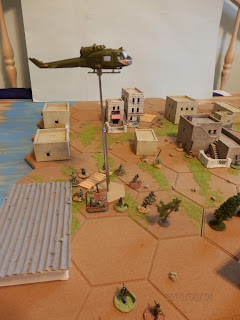 Rangers fast rope down from a Blackhawk.  No Jack, that is a Blackhawk! 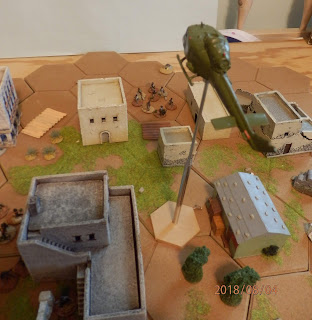 US gets air support every turn which is good because the Somalis get fighters every turn.  At the beginning of turn two a gunship ( yes Jack that is a gunship) strafes fighters drawn towards the commotion. 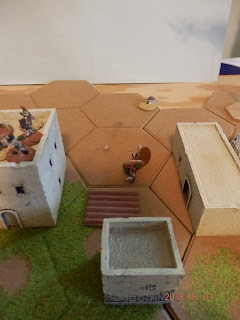 The gunship does a fine job clearing the street! 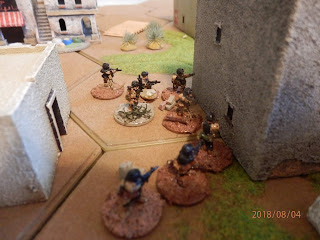 Delta quickly prepares to enter the target building.  FOF has very good rules for this sort of thing. 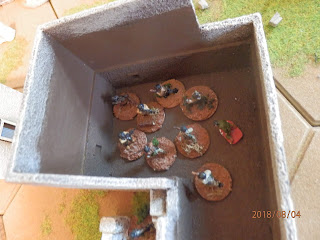 The Somali guards keep their wits and lay down fire but it does them no good.  Delta is too fast and soon Durant is back in US hands! 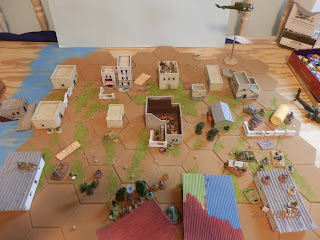 Situation at the end of turn two.  I often place figures on top of buildings rather than in them because I am lazy.  Rangers bottom left and right with delta in target house.  Helos overhead.

Unfortunatly my brilliant pictures of the next two turns didn't come out.  Sorry. 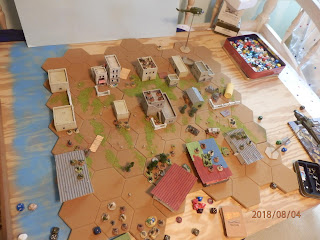 Situation at the end of turn 4.  US in the same positions but more Somalis massing along bottom of table.  Also Civilians showing up and they are NOT pro-US. 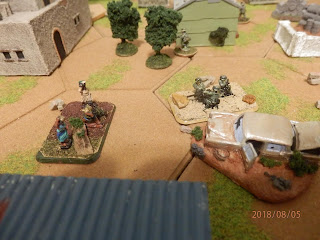 They didn't teach us what to do in ranger school about this. 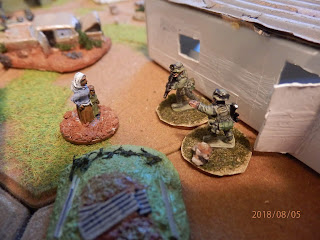 An NCO attempts to disperse part of the crowd.  He fails. 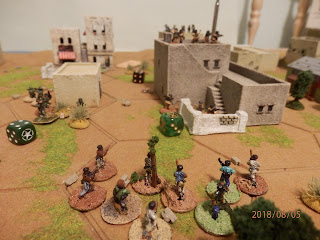 The Somalis finally feel strong enough to have a go at the target house.  (The crowd in the picture two above is still blocking the LMG.)  They fail. 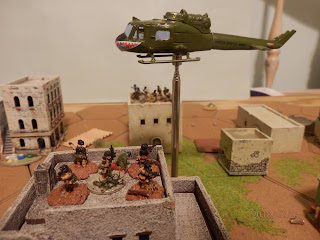 With that a blackhawk ( yes Jack, still a blackhawk) comes in to load Durant.

Mission accomplished!    US sustained only 2 lt wounds.  Fun, short game and I got to use my Delta figures.