On this memorial day I would like to remember all veterans; especially those that gave their lives for our freedom.
Grunt's Forward is still waiting Rich to get started.
Have been playing the formula one racing game "Race formula 90" that I mentioned last post.  Bought some 1/200 scale cars and painted them up.  Big difference from most of the drab army/navy stuff I paint.
Wanted to run a whole formula 1 season and got to thinking about the Forward system.  Am going to see if it works with my 2005 BMW team.  You take the role of the team boss and have 8 major characters that work for you.  Your job is to keep them moving in the correct direction to win the Championship.

Our Racing director is Thomas Bundt.  He is very condescending of immorality and what he considers poor work ethic.  This makes him hard to get along with but is a great strategist (skill level 8) and so so at teamwork ( level 6).  Our #1 pit crew is below average skill (4) and so so at teamwork (5).  (Hey, the season just started.) Thomas was very critical of the pit crew during the pre season and their teamwork went down accordingly.

I had high hopes for Monza.  Our team was relatively new but had some great folks on it and the teamwork was improving.   We also had a highly skilled #1 driver in Nick Heildfeld.  Nick grabbed the pole position while Kimi Raikkonen (McLaren) took second.  Our second driver Jacques Villeneuve took third with Michael Schumacher (Ferrari) taking fourth.  To get the pole we had to commit to a three pit race. 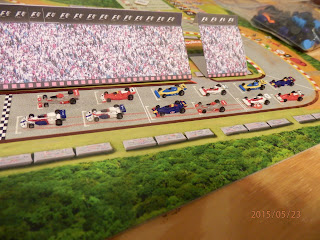 The starting grid!!!!!
The other teams include Red Bull, Toyota and Renault.
I think the cars painted up pretty well and add a lot to the game.

The race started well though our #2 (fast car) rapidly fell back. 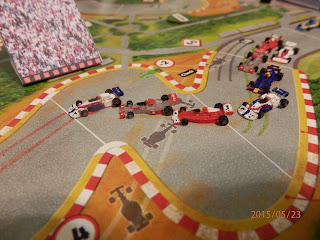 Nick out in front followed by McLaren and Ferrari.

Unfortunately for BMW our #1 pit team was called on for a skill check and failed, adding one to each of our pit stops!  Despite this Nick held onto first almost the whole race. 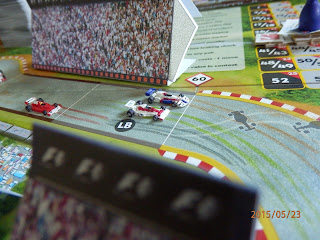 Toyota makes a stab at the lead!  Schumacher bides his time. 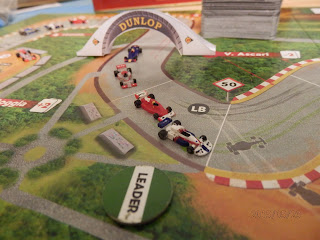 Schumacher takes the lead with 4 laps to go and Nick can't catch him.

The press conference goes well as Nick holds his tongue about the slow pits.  I try rapprochement with the pit crew that fails.  Thomas Bundt is more sure than ever that he is right and his skill also goes up by one.
Next up Hockenheim.   Will the pit crew rally?  Will Bundt's skill show through?  Will Nick put on another sterling performance?  We can only keep the race team moving forward.