On my last post I stated I had ordered Dead Man's Hand from Scale Creep.  It came in and I had a chance to read it during my week at the beach house.  I have since played 2 games hence this is first impressions only.  I really dislike reviews from people that have little to no experience with actual gameplay so I freely admit this caveat.  I also freely admit that the only other rules I have played were Avalon Hills Gunslinger about 40 years ago.    I am not going to go through the mechanics in detail as there are reviews and videos on that; just my impressions.  So here goes... 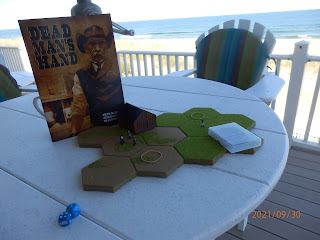 Trying them out at the beach house.  Each hex is 10 cm, rubber bands are stacked boxes!

Dead Man's Hand is meant to be cinematic unlike Gunslinger.  Pistols don't run out of bullets after 6 shots, they run out if you roll a "1" on a D20.  There is no difference in movement between a door and a window or even 2 roof tops!  Each figure gets three actions upon activation and the idea here is there is alot of shooting.  Rifles are better at range but pistols are great up very close.  They could have called this "blazing pistols."

With each shot there is a 50% chance of a "miss" 40% chance of "under fire" and 10% chance of "killed or at least wounded out of the fight".  There are some simple modifiers that add strategy to the game.  "Under Fire" functions something like "shock" in too fat lardy games.  This is stress to the figure from either accurate fire or actual minor wounds.  I am not a particular fan of shock in Rich's games preferring morale tests and I didn't think I would like it here.  Each under fire marker degrades the shooting performance and if you acquire to many you are out of the fight; presumably either running away, playing dead or succumbing to wounds.  You can self rally as one of your actions.

Two other game mechanisms of note, "duck back" and "quick shot".  Duck back allows a previously unactivated character who is about to be a target of  some serious shooting to duck back into cover.  This is automatic and he will only be shot at once BUT he forfeits the rest of his turn.  Quick shot allows any previously unactivated character to take 1 shot at the activated figure.  Normally this will be simultaneous actions and is one unaimed shot and also forfeits the quick shooters turn.  Both of these options allow great tense in game decisions.

So far this sounds moderately interesting. There are 2 things that improve this game.  First there are 4 "factions" in DMH that have various unique rules.  Without extensive playing on my part, none of these appear too powerful or gamey and they do add color.  For instance, lawmen can remove 1 under fire marker from 1 of their characters at the end of their turn for free. The second are the poker cards that come with the game.   These clearly fit in with the theme, are used for activation and also have in game "plays" that you can use.  One card allows you to ignore negative modifiers to shooting for that shot.  Another card causes you opponent to stumble and therefore can't do another action after he moves.  These are gamey but fun.  I can imagine they would be a riot in a 2 player game. 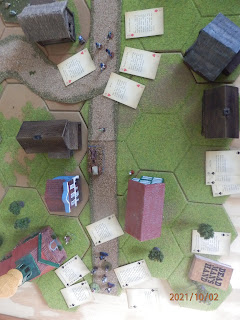 The lawmen [royal navy] meeting the outlaws [pirates] in Tinytown.  You can see the cards down for activation.  I have seen several reviews complaining that the cards are too small.  As you can see any bigger and there wouldn't be room for tinytown. 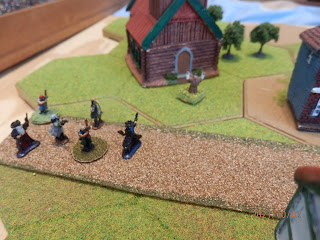 The outlaws!  Led by Black Bart. 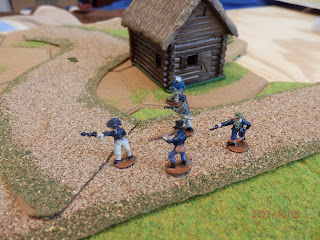 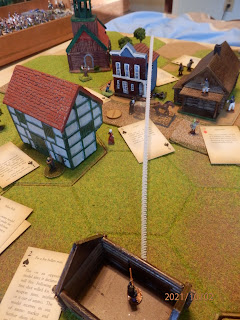 Black Bart about to take a shot at the swabbie on the porch roof.  PO Roberts (+1 to shooting) who will activate last with his 2 of spades that had been swapped by the bad guys takes a quick shot.  " Do you feel lucky punk?"  Roberts was feeling lucky rolling a 20 and Black Bart falls out the window to his death. 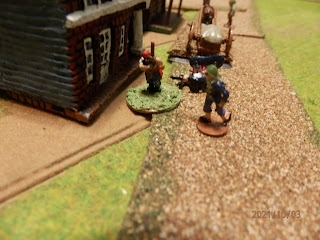 End game: 1 outlaw fails the "Big Nerve" test while trapped in a building and surrenders to law enforcement.

My initial impressions?    This game works very well as a cinematic wild west game.  Like SAGA it is a game with a certain theme and it is fun.  It has worked fine for me solo but I think this would be a blast to play with friends.  I thought I would have to modify the gun table but under fire works well in this context and to have individual wound locations would slow the game down.  I played the above game in 30 minutes being new to the rules and taking pictures.  You could also call this game "blazing fast."  It is begging for a campaign system and they have one called legends.  I have ordered it.  I also need to order some wild west figures.

If you want a cinematic, fast play Wild West game with lots of decisions and interaction then I would recommend Dead Man's Hand, at least so far in my 2 plays.