Thrydwulf on the Saxon Shore

Have finished my house rules for SAGA.  They emphasis on board leadership and decision making a bit more and I have added variable movement to make the game more solitaire friendly.  Submitted them to WSS so we shall see.
Now that I have a set of Dark Age rules I like I can turn my attention to the campaign.  Herein dear reader is the first playtest of Warband Forward.

10 Huscarls
14 Ceorls
4 Geburs
( each figure represents 2 men and I forgot to take a picture of the board.   It is a river with a hill in the center and a church with St Culbert's wristbones in it on the left.  The Saxon's have archers on the hill to start other forces arrving.  The Vikings disembark from longships.

Saga of Thrydwulf and the Saxon Shore


Five summers ago fierce boats landed along the river.  Lookouts fired their bows and sent a runner into town.  The Vikings had broke their truce! 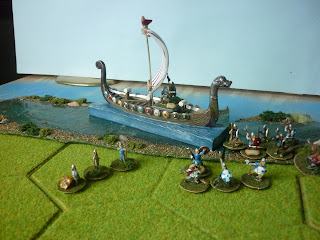 Vikings land!
Thrydwulf brave and true gathered his forces from the town.  No gold would be given to these heathens on this day.  God was with His people and Thrydwulf vowed he would drive them into the sea.  He sent his Lt, Sabert the timid, ahead with the Ceorls to the church on eagles wings.  They arrived just ahead of the viking horde and formed a shield wall straight and true 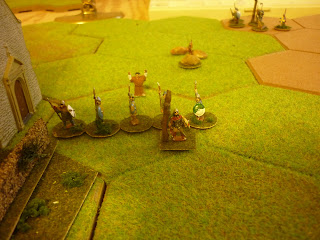 Sabert up front, Br Cearl in the back 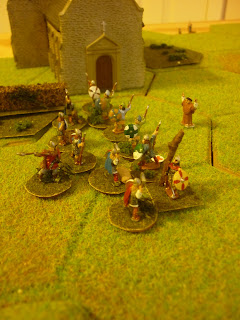 The Vikings howled like the devil and formed their own shield wall and attacked!  Clanging could be heard along the shore as God's forces battled evil.  Many good men died and the wall broke.   Five tired heathens broke into God's house

﻿
More Vikings arrived and blocked the door to God's house so those inside could find the treasures within.   But God's treasures were well hidden to those without the Spirit.
God's own instrument, Thrydwulf, showed up and drove into the heathens in front of God's house! 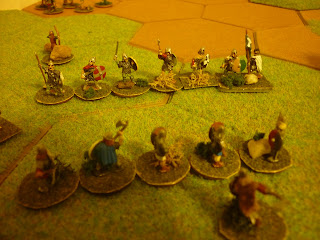 Battle lines are drawn!
This clash of warriors, so epic, lasted for an hour with many men falling but Thrydwulf would not give up for he knew God was with him.   Br Cearl came and started to pray.   Where was his faithful Leutenant, Sabert?   He was too timid to join this battle of warriors and so earned his name this day.
The heathens started to waiver when their warlord came up snarling like a beast from the underworld. 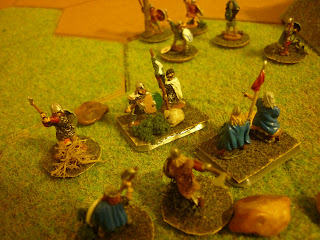 Saxons down to 2 men left/ Vikings 3!
Thrydwulf calmly blocked the blows of the dumb beasts as the ceorls from the hill had worked their way around the flanks of the Vikings  now attacked! 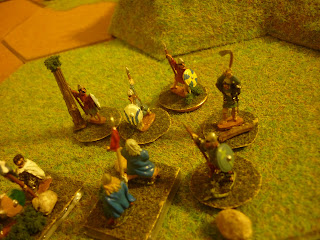 Vikings are taken from the flank!
With their leader slain and the cream of their Hirdmen dead in front of God's house the Vikings quickly beat a retreat to their boats.   As the Ceorls started to chase them Thrydwulf said, "Blessed are the merciful for mercy shall be theirs.  Let us praise God that his house and the relics of St Cuthbert are safe!"
So now you know the tale of Thrydwulf and the Saxon Shore!
You can see the battle was a lot of fun.   The rules worked great.  Shieldwalls normally don't play that big a part as they are easily flanked but the terrain here favored them.  I liked the fact that you can now have pitched battles over several turns with the potential of reinforcements.  It was exciting as the Vikings fed forces into the meatgrinder only to be flanked anyway.
Post battle Thrydwulf figured out that Sabert wasn't helping him on purpose (unsupportive) and canned him.  Had he been killed though we would be talking about the Saga of Sabert.  In addition both his overlord King Osyom and the Church are very impressed and he gains a glory point.
If you want to play this yourself the Vikings get a warlord and Lt plus
20 Hirdmen and 14 Bondi with up to 8 bondi bow armed.  ( You roll up your opponent just like Platoon Forward.)
Enjoy
Joe
﻿
﻿
﻿
Posted by FlightDoc at 2:41 PM 2 comments:

Two from the Red Rippers

Started my Torch campaign playtest.   It will be of limited duration, and several special rules as well.  The air  battle esentially was 3 days from 8-10 Nov.  I am thinking 3 missions per day using 2 divisions of the Red Rippers with the option of asking the squadron for 2 additional planes/pilots at the cost of 1 glory point.     Play Ball! 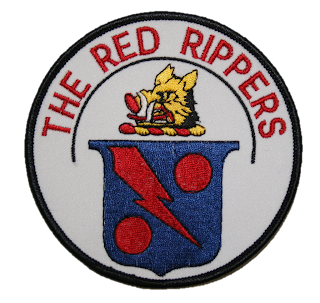 
The AM mission rolled proved historical (not making it up!) and was a fighter bomber mission to the airfield at Cazes.  "Mac" heard "play ball" on the way their so knew the French were going to resist.  They had almost reached the airfield when 3 Hawks rose to challange the 6 wildcats.  Mac and Spanky jettsoned their 100 pounders and kept the Hawks so busy that Mac downed 1 for the Rippers first kill of WW II!  Shortly theirafter a random event called for a french morale check which the french failed and decided not to fight!  (Way cool!)
All 6 fighters beat the airfield (though I was afraid Mac would get shot down!) with Windy taking the honors by destroying a hanger and a french bomber! 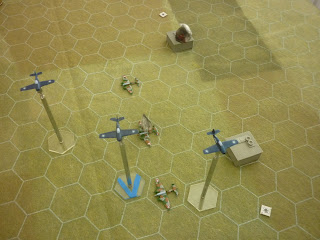 Windy shows how it is done!

Spanky's engine was hit by groundfire and he nursed his plane back to the carrier.  Hubie had sustained minor tail damage from a Hawk earlier so the time was at hand for carrier landings!.  Spanky went first and crashed onto the deck.   After he was recovered (WIA) the plane was quickly tossed over the side to allow the rest of the Rippers to land without incident.  Good thing no one had fuel challenges!

A win for the Red Rippers though!   Hopefully Spanky will be back before the war is over.  Post game Windy upgraded to Veteran and the Squadron CO ,Tommy Hall, gave us an extra plane and pilot for the next mission.   7 Pilots and 8+1 planes left.

Was feeling pretty good about the Rippers now.   Mid day mission was another fighter bomber one.  This time to Fedhala to support the beaches.  6 Wildcats plus the one that Tommy gave us; we should have the war won by dinner! 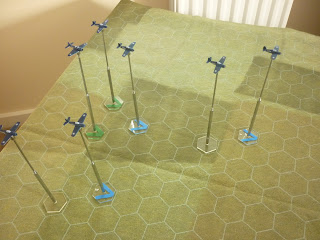 Rippers on the prowl

Unfortunatly we were intercepted early by 5 DE 520s.  This plane is at least equal to the wildcat, we had a fight on our hands! 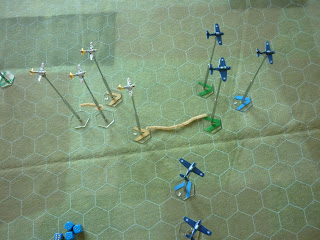 Time to jettson your bombs!
(the one plane is a wildcat disguised as an SBD.
It didn't help)

It short, it was ugly!   We never made it to the target.   My rolling was bad but I can't even blame it on that.  We stunk.   The Rippers lost 4 wildcats including our "extra".  Lt Seilers- KIA.  Ens Boyo Riley--KIA.  Ens Bartle managed to bail out and was picked up by US troops.  He should be back on the ship tonight.  Windy managed to down one DE 520 and Mac pushed one off the Greek's tail. It is a good thing you can only lose 1 glory point per mission.
Post mission we introduced our intel officer, Lt Rogers.  He must have washed out of flight school because he is coarse and doesn't like us.
That leaves us with 4 +2 pilots and 4 +2 planes.  Tommy already isn't happy since we lost his pilot.

It is fun seeing how this plays out and tonight I get to see how we have contributed to the battle overall.

I am getting ready to start my Torch campaign this weekend.  Will roll up my Red Rippers wildcat squadron.  Thought I would share my squadron roster sheet with anyone who is interested here. 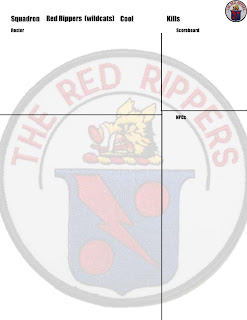 You will note it is different than the one in the rules.  The one is the rules is functional.  This one is more personalized.    The upper left is where the pilots are listed.  Upper center is for Glory points (I call them cool points) and for total number of kills.  Upper right is the scoreboard for the squadron.  Lower left is for listing notes about the missions as they occur.  Lower right is where the NPCs are listed.
A note about glory points.   I had originally called then "cool" points.  During the editing Rich stated that "cool" was not used during the war and was US slang anyway.  He felt it would ruin some of the flavor I was trying to create.  He left it up to me as always and after thinking about it I did change it to "glory" points primarily for our UK audience. [ 40% of readers here are from the UK] It does accurately reflect what we are going for.   I still think most US gamers would have been fine with "cool" in any fighter pilot game.
I hope you find the sheet useful!
Enjoy

Been a busy summer with my son back from university.   Had almost 4 weeks of holiday of the last 12!   Has not left much time for gaming or updating this blog.  But things have been moving.

Squadron Forward was published!  While not as much feedback as Platoon Forward, all of it has been positive.  Am now tinkering with how to do more specific, limited air campaigns such as Midway, a Malta convoy or Operation Torch.  This would use Squadron Forward but add a few specific rules to cover the unique time limited event and would have a definite victory condition besides getting your squadron through.  First up is Operation Torch.  Needed some Vichy fighters painted up so: 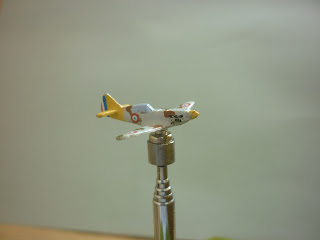 Second up I have been working on a variant for SAGA that makes it  closer to how I play it.  It adds Shield wall, variable movement [must for solo gamers! ] morale after melee, leaders and champions.
Still keeps all this stuff simple in the spirit of the SAGA rules.  I think I am going to call it "Stepping out" and will prbably publish it in WSS.  Needed some Normans for this one to test it on so... 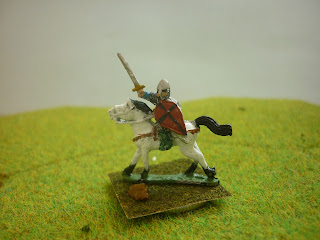 OK so the painting isn't terrific but he looks great in

the midst of battle!

Release the Hounds is moving along well.  These are my Coastal actions rules for WW II desgined primarily for DDs and below.   I hadn't wanted to write them because I wanted to write Flotilla Forward but couldn't find a set of Coastal rules that didn't require me to write a bunch of stuff down. Because these are actually a set of tactical rules I am going to use outside playtesters for these.  I have contacted a couple of you but could use 2 more.  If seriously interested in playtesting these and you have a good working knowledge of coastal actions AND don't mind crappy pre production rules with poor explenations then e-mail me with 3 sentances on "why me" at the_legans4 at msn.com or just post here..
Flotilla Forward-- back burner until Release the Hounds is further along.

Middle of NoWhere--  Feel bad about this.  I did paint up a Huey but have not playtested any more scenarios.   Blame SAGA.

Jasta Forward--   Looking for someone with more knowldge of WW I aircraft  than I to help.

Thats all the updates for now.    I hope everyone is enjoying both Platoon Forward and Squadron Forward!