Grunts Forward is finally published!  It is available at Wargamer Vault.  (wargamervault.com).  To celebrate I used my 10th mountain division squad in Somalia on a mission.  Thsi is there third mission and they are doing pretty well.  As a matter of fact, Lt Concepcion put Cpl K in for a medal after he rescued a Malaysian driver last battle.  ( A new facet for gamers that Grunts Forward provides)  Unfortunately Capt Parr was not as impressed.  I did not roll up a scenario as I have been wanting to do an attack on a food center for a while.  ( Even bought a tin shack for it!)  So I played "Cordon" out of Grunts Forward.
Characters
Sgt Chin Gr II leader, Father was a baker in a small southern town.  He joined the Army right out of high school.  ( this is from the new background tables in GF.  I rolled "son of baker in a small town".)  Pragmatic/ Position ( this is from PF and means he is a pragmatic man interested in getting promoted) The squad is currently neutral towards his leadership.  ( GF tracks the squads disposition towards the leaders.)
1st team  Cpl Krynowski ( Cpl K) beloved in the squad. Gr II leader,    Was a petty thief before joining the Army ( has good lock picking skills!) jovial/ wealth
2nd team  Cpl Street Gr I leader, was a factory worker in Detroit like his old man until he yearned for some adventure.  Aggressive/ Greedy 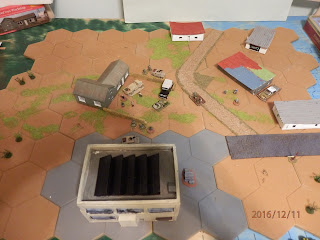 Sgt Chin's squad around the food warehouse where food workers are loading a truck for distribution on the outskirts of town. 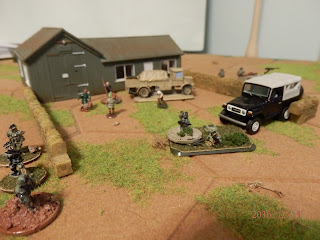 Calm before the storm.  ( Good shot of my new building too!)  Cpl K center, Cpl Street and Sgt Chin left.

Shots rang out from a nearby building and Sgt Chin saw two troopers down from Cpl Street's team!  They were suppose to meet some NGOs at their food warehouse and then escort them to a distribution point.  Now all hell starting breaking loose.  Two men down before the battle even began. 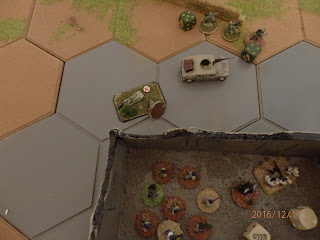 Shots from the office building strike two men as the battle starts! 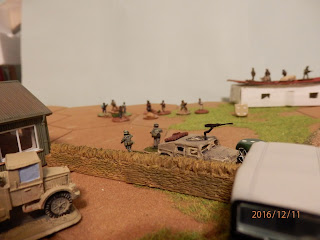 As Sgt Chin climbs over a wall and begins to lay down fire at the office building he hears Cpl K say, "Sarge.  We got more company!"  (Figures on building are actually in building.) 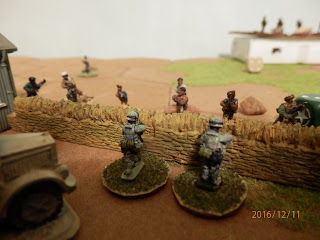 PFC Long and another trooper come face to face with the enemy!  Two grenades and the HMG from a HUMVEE pinned down the attackers. 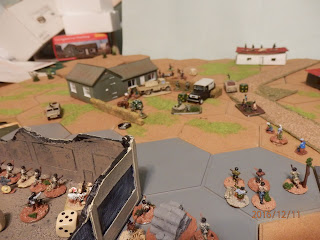 Things aren't looking better towards Sgt Chin's front!  1st team loses it's 249 gunner and Cpl Street goes down with a groin wound.  ( no, it left that intact!) Sgt Chin frantically calls for air cover while he becomes pinned down.  The troopers are able to keep the enemy from advancing but can't seem to drive him away.
Then, a sound brings hope to the Americans! 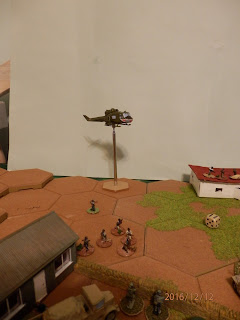 In the heat it looks like a Huey but trust me it is a Blackhawk!

A Blackhawk arrives and immediately catches the gunmen near PFC Long in the open.  The results are not pretty with 3 dead and the rest scattered. 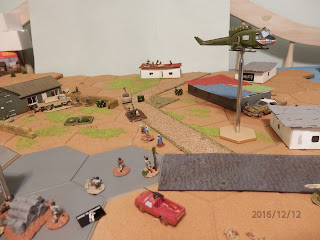 The blackhawk then drives these troops away as well as convincing the technical to leave. 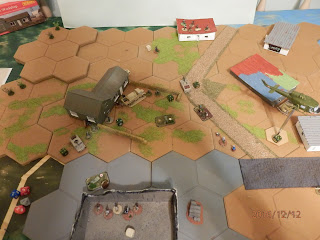 At this point the Somali warlord realizes he is not going to be crossing open ground to the warehouse and withdraws.  2nd squad has protected the NGOs and the food!

Great game but the battle was in doubt until the helicopter showed up.  Post battle the squad sustains 2 KIAs and Cpl Street lives but is invalided home.  It is "unlikely" that the squad will get another NCO and they don't.  The LT puts PFC Long in charge of the second team.  With 3 casualties Sgt Chin survives the die roll and the squad stays neutral to him.  ( At least they protected food workers!)  Using the new NPC table it turns out that the head of the food program is a missionary named Rev Stransan.  He is very appreciative of the squad's work and talks to the unit's officers about how great they performed.  He also offers to be the squad's personal chaplain and starts to fuss over them.  In a combat zone there are no atheists so the squad's morale goes up!
Hopefully this report gives you an idea of what Grunts Forward adds to your campaign.  For those of you who want to try this scenario here are the forces:
US  8/8 (for FoF gamers!)
1 squad of 9 soldiers plus 2 HUMVEES.   A Blackhawk will appear two turns after Sgt Chin makes contact.
Somali gunmen  ( 8/10)  Figured a warlord attacking a warehouse would have well trained troops.
3 squads of 7 men + RPG and a half squad.  3 leaders; 1 Gr II and 2 Gr I.  1 MMG and 1 technical.

Several pictures of some SAGA games I have played. 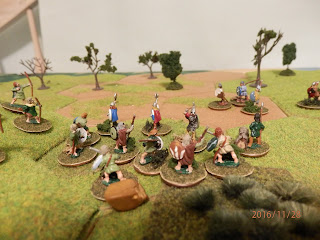 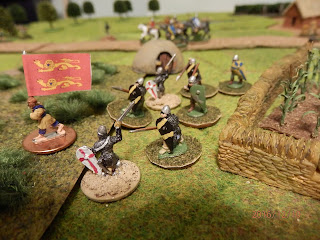 Exciting news in time for the holidays!  I just read the final draft of Grunt's Forward and should be uploading it to Wargame Vault this week.  Here is the photo used for the cover: 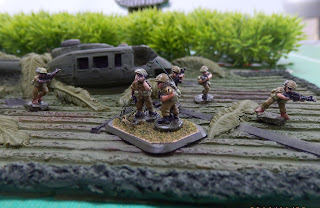 I hope if conveys some of the chaos and frustration of fighting an asymetrical war.

Am really excited and think you will be too!

Posted by FlightDoc at 7:30 PM No comments: