Happy Thanksgiving.  Please take a moment to remember all the servicemen and women around the world away from their families today.  Thank you.
Took a break from painting black Seas ships to play  some Crueler Seas last weekend.  Decided to play "Sea Sweep" from my upcoming Flotilla Forward.  Sea Sweep in an encounter scenario that can be used to simulate sea encounters when you aren't hunting convoys; anything from cruisers in the Philippines to picket patrol in the North Sea.

Mission:   Keep station at point B until 04:30 hrs.  Be alert for marauding enemy naval craft ( probable E boats) and engage said craft.  Back up destroyers will be available. Good Luck and Good Hunting!

Note early dogboats used here had 2 pdr up front and 20mm gun in back with only 2 torpedo tubes. 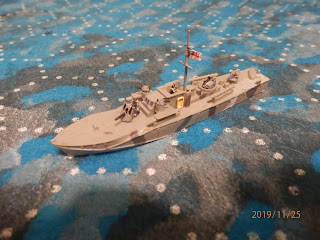 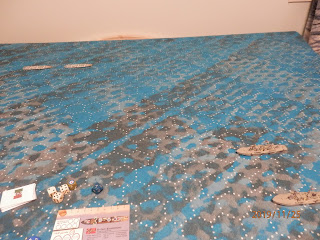 Dice sits with his crew staring into the night.  Finally a lookout spots 2 dark shapes moving off the port bow.   66% chance these will be S-boats.

Dice starts engines and they move to investigate.    " Blimey it is a minesweeper!"   The heavy seas makes it hard to go fast as Dice orders both boats to attack with torpedoes. 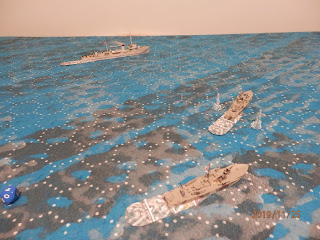 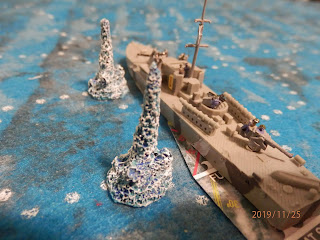 Benson's boat takes a 4 inch shell midship and a near miss severely damaging the boat. ( 21 hp left) In the best tradition of the Navy he calmly finishes his turn to port and lines up his shot as the minesweeper throws everything at his crew. 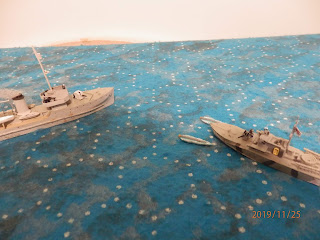 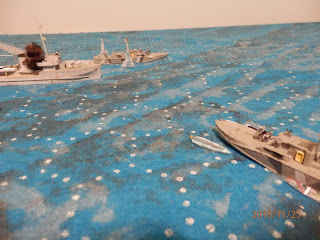 A satisfying explosion rocks the night as Dice is lucky once again!  He flashes across the bow of the German and open the throttle.  SLt Marks comes in and tries his luck.  Unfortunately he misses.

Both Dogboats move towards the rally point with angry tracers chasing them.    Suddenly... 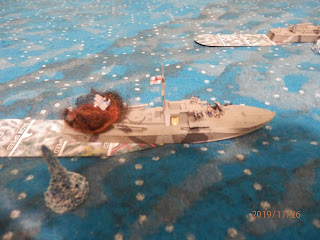 A huge explosion occurs on the aft part of Mark's boat.  A tracer must have ignited ammo and blew the gun right off the ship!  [ critical hit]  2 tars dead.

Still both boats make it to the rally point.  A successful night as Lt Benson reports the minesweeper sunk.

Fun game.   Post battle Dice's boat has a chance to make veteran status but misses.  Both boats are repaired in time for the next mission.