Finally got some items unpacked and had some time to play a game.  Read an excellent article in WI 286 entitled, "The Hard Ride" By Joe Trevithick and Piers Brand.  It is about US convoy operations in Vietnam.  What better way to test my ambush scenario from "Middle of NoWhere"? Please note I do not have all my terrain unpacked and do not have all my trucks unpacked.  So excuse the german trucks and american halftracks!  They are all trucks for this scenario.  Using my US squad.  We last saw them assaulting LZ Hotel which was posted in August 2010.  (was it that long ago?)


SSgt Davis did not like it one bit.  He was a soldier not a baby sitter.  Guarding a convoy was like being a target.  Still orders were orders and the LT said this stuff was important.  Davis put Sgt Colton's squad up front in teh first 2 trucks.  Colton and his squad weren't very good so if casualties had to be taken it might as well be them.  Davis would follow up the rear with the 113. 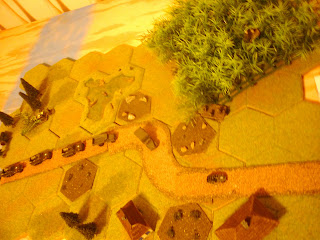 ﻿As they slowed to take a bend in the road near Xuan Loc the silence was shattered and the lead trucked rolled over on fire.   SSgt Davis got his men dismounted and started taking rifle fire from nearby trees across the road just as the second truck in line exploded. 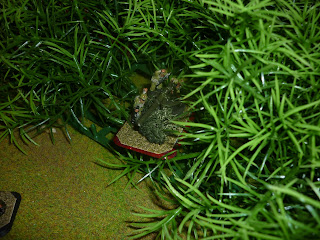 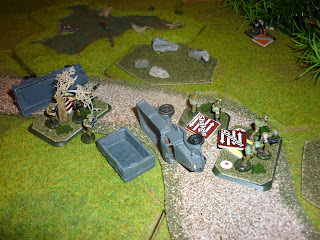 1st squad stumbles out of the trucks.
Luckly only losing 2

﻿Sgt Colton tried to rally the squad but they started taking automatic weapons fire from the jungleline.  He ordered the dazed men back to the buildings to rally.  Meanwhile the jeep, and other trucks kept moving forward out of the kill zone. 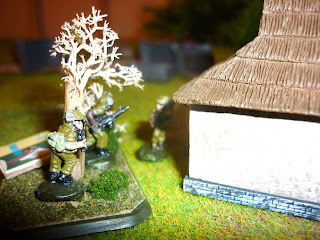 Unusual for Colton, he rallies half the squad
and the MG.

﻿The M113 found the range to the recoiless rifle and started a steady stream of fire that slowed the blasts from the jungle.  SSgt Davis suppressed the rifle fire facing him and took his squad into the woods to investigate.  Sgt Colton sent his half squad and MG team towards the jungle to supress the automatic fire there. 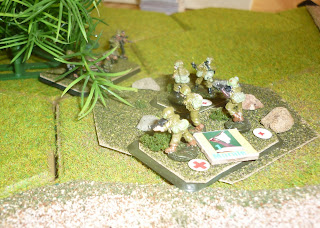 ﻿Most of 1st squad slugging it out

﻿The jeep and 2 trucks made it off the table.  1 truck took LMG fire from the jungle and was knocked out.  With 3 trucks destroyed and the rest out of the kill zone the VC/NVA broke contact and left the americans in control of the field and very frustrated.

Short, vicious, frustrating fight.  Hard for the ambushee to win which is why this scenario was not included in Platoon Forward.  But for a suplement on asymetrical warfare this is bread and butter.  3 trucks I would have considered a minor loss except the US caused NO casualties.  Yep, in spite of copious ammunition expended the NVA walked away scot free.  No blood trails today.

After the battle morale of the 2 squads did not change.  The battalion commander (who does not like the platoon) has pulled 5 men for special guard duty.  The company commander Lt Jaroze ( who use to be the platoon commander) will ofset this by giving the platoon an extra MG team on their next mission.

It was fun to finally play a game again  Now to unpack some more stuff!
Enjoy

Posted by FlightDoc at 2:36 PM No comments:


I finally have my computer after nearly 4 months!!!!!!!  Am busy unpacking boxes.  Before they arrived I sent off the first draft of Squadron Forward to Rich.  He won't look at it for at least 2 weeks as he is up to his elbows in IABSM 3 but at least it is done.

Wanted to do a new ambush scenario for vietnam but there wasn't enough time or space yet so instead ran a third mission with my trusty french Hawks.  Also I now can include some pictures to keep your attention.

Col Renard called Lt Leroy into HQ.  "Lt, a reconnasense plane spotted german trucks near Saarbrucken moving supplies to the front lines.  If you hurry we can give the Boche a nasty surprise.  Remember, your mission is to take out the trucks."

Lt Leroy hurried back to the Escadrille and discussed the mission quickly with Lt Martin his right hand.  they only had 6 planes operational.  Leroy would lead the main strafer patrolle while Martin led the secondary.  They would leave Cpl Chef Grasse behind as the new guy.  A quick brief and they were off!

﻿Shortly before the German border Lt Leroy sensed 3 ME 110s headed their way at their 5 o clock.  Lt Leroy decided he would continue on and Martin should try to delay the Me 110s for several turns and then join him. 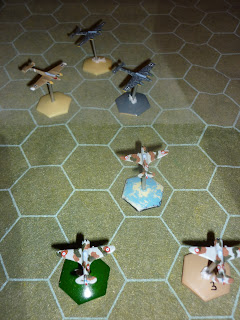 As Martin's Patrolle tangled with the Germans the new SLt (that had cheated at the academy) Caron missed his half loop and became separated.  After several minutes Martin called to break off and head for Germany and Caron was lagging.  Then Caron preceeded to try to line up shots at the ME 110s.  Martin snapped off a direct order to move out as he wheeled his hawk back west to get his wayward charge.  Caron duly broke off and headed east.  Sgt Lisle continued east as well.  As SLT Caron straightened his hawk out a ME 110 came up and blasted him from the sky.  He managed to get out of the stricken fighter over no mans land as Martin saw a good chute.

Suddenly Lt Martin found himslef alone with 3 ME 110 fighters.  While his hawk was more manuverable, the germans had a definite speed advantage. 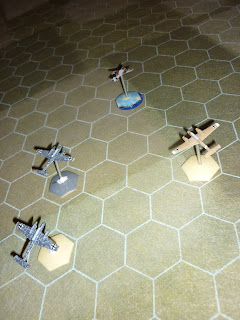 The hunter becomes the hunted

﻿Lt Martin called Sgt Lisle back for help but his plane caught several blasts of fire from the germans as he twisted and turned.  His gas tank was punctured and his radio knocked out but he managed to escape west.  He swore he would ask for censure of SLt Caron when he got back to base.

Lt Martin's adventure had allowed Lt Leroy's troupe to arrive over Saarbruken unscathed.  They found their targets and went to work. 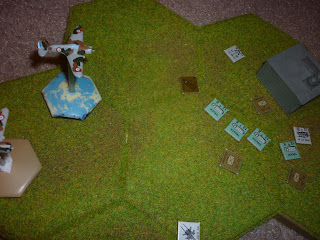 In 2 passes they damaged 3 trucks and Cpl Chef Prideux destroyed 2 while pinning infantry and AA.  [Used my Brag the Hun rules].  SLt Brun's plane was hit by ground fire but took minimal damage.
The 5 Hawks made it safely back to base.  I chalked it up as a minor victory for the French as they took out all 5 trucks, their primary mission, but did lose a plane.

Post mission Lt Leroy was finally promoted to Capitain, sealing his position as CO.  While he has not upgraded to veteran pilot yet he has developed an uncanny sense as to where the enemy is.  This would be called "radar like" if we knew what radar was!  [eagle eye].  Lt Martin fumed about SLT Caron and waited for his return.  After 3 days he began to worry and made several calls to front line units.  A week later word was recieved through the Croix Rouge  that SLt Caron was a POW with the Germans.   Lt Martin was racked with guilt and lost his cheery disposition.  Capt Leroy told him to forget about, Caron had it coming after what he did but Martin still felt responsible.  The Flight Surgeon has grounded Lt Martin for 2 missions to work through this.  [ Event rolled that grounded Martin for 2 missions; way cool!]  A replacement pilot has also show up: Slt Challe a classmate of Caron's from the academy   Pragmatic/religion  and green.
We are down to 5 planes plus one in depot  and 6 pilots plus Martin.   Worse we have no veterans and our reputation is still average.

Great game as strafing for the Hawks is unusual to roll up.  The system is a blast as the interactions affect the tabletop which is what I am after. If the squadron can hold it together for 1-2 more battles I think their experience will start to rise and then it should get easier.