Decided to use my SS platoon on the Russian front.  These guys are part of Army Group North in 1941.  They are one of the first squads I started with Platoon Forward  but I have only used them 5 times.  The second battle their Company CO was bumped upstairs and their platoon leader Untersturmfuhrer Christianson became their new CO.  This has helped them a bit and they have an experieced E-6 Oberscharfuhrer Kehl as the platoon leader.   A side note Kehl has a lady on the side "Countess" Triblinka but she has yet to play a part in the game.  I am just waiting...

I rolled and got Scenario D "Exploitation" which is a perfect Blitzkreig scenario for 1941.

Christianson called Kehl over to his halftrack.  " My friend, the attack is going perfectly.  We have a hole to exploit and we are going to push down a road 6 kilometers to a warehouse that intelegence thinks is being used as a higher HQ.  Regiment has formed a Kampfgruppe under Untersturmfuhrer Deitz  to take it before they move.  Your platoon will be the infantry for this group.  You move out now!  Good luck to you. 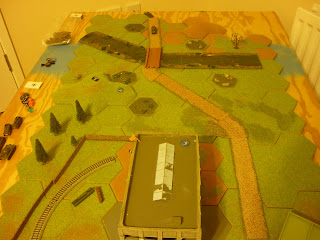 Looking towards the german entry point
Warehouse is bottom center
Germans entered in Column with the AC in front followed by the tanks and then the infantry.  After the AC crossed the bridge Ivan opened with some ATRs and knocked it out.  Deitz laid down covering fire and ordered Kehl to advance and take out the AT rifles and advance on the warhouse. 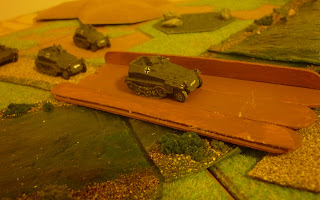 Eastward!!
The ATRs were quickly silenced and the halftracked drove up to the warehouse. 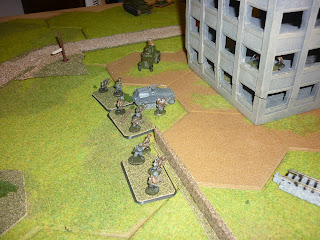 3rd squad center with part of 1st on right.
Kehl with pistol
Russian AC moving around the corner came as a shock!
﻿
The russian AC was forced to withdraw by weight of MG fire as the germans attempted to duel the communists in the warehouse.  Without cover 3rd squad was exposed so it was a losing proposition. Kehl ordered 3rd sq into the warehouse with 1st sq to follow. 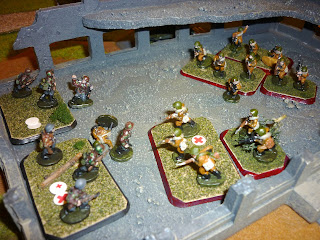 The SS gain a foothold.  Vaughn on left, Kehl in center
Dead russian Sgt (Gr II) next to Kehl
The SS gained a foothold but at great cost losing 4 of their squad.   The warehouse was crowded with boxes but they could tell there were many russians inside. 1st SQ joins the battle!
An epic battle for the warehouse ensued.  The SS continued to "win" their melees but lost men everytime.
Finally... 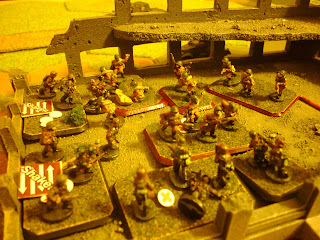 3rd sq down to 4 effectives (left)and morale shot as the russians charge yet again
1st sq down to 6 effectives and Scharfuhrer Bauman WIA and down in the center
Oberscharfuhrer Kehl had to admit that elan would not overcome numbers and stubborn russian defense this day.    He pulled his remnents back from the factory  across the stream to the panzers too await reinforcements.
3rd sq had 2 men left out of 10.  1st squad had 5 men out of 10 and lost Bauman.  2nd squad had 8 left.
Post game Bauman is Invalided home.  Rottman Weiss is a hero of the 1st squad from a previous battle.  He was promoted to Scharfuhrer and will be the new squad leader for 1st squad.  2nd squad recovered their morale by taking out the ATRs and a MMG and they now have normal morale.  Their squad leader also meets Oberscharfuhrer Zimit the company Sgt Major.  They hit it off well as they are both from Frankfurt and know the same people.
This was a great game to play!   Epic fighting in buildings is always fun.  The germans won constantly but lost men and the russians passed all their morale checks.   A true stubborn defense!
Platoon Forward can be used quite well to simulate the blitzkreig with this scenario.
For those of you that want to try it the system generated this for the russians
On board:
3 ATRs/ 1 MMG (may set up dug in)   1 squad     1 gr III leader with brilliant leader card
1 gr II leader
Reinforcements    1 Armored car     1 tank      1 squad with gr I leader     1 half squad armed with SMGs
Enjoy
Joe﻿
Posted by FlightDoc at 2:10 PM No comments:

Wife was sick over the long weekend which was not good but I had plenty of time for gaming.   Got four games in including 1 coastal action (S-boats against a convoy), 2 SAGA games and 1 platoon forward game.  Thought I would highlight the platoon forward game since I haven't posted one of those for awhile.

Capt Newsome went over the plan with what was present of H company of the 101st.  They had landed in Normandy 2 days earlier. "We will demonstrate down the main road while Joe you will come up this side road into town and take em.  There is a white building that is the key to the town.  We will have one Sherman go with you Joe..  Any questions?"  Currahee! 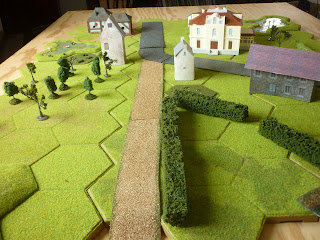 Road looking into town
Small hill off to the left
What is your plan LT?

Lt Ramsey decided to put the mortar on the hill with a 30 cal at the foot.  He would accompany 1st platoon up the hedgegrow toward the white building while 2nd squad went into the wood on the left to flank the white building.    The Sherman tank would stay back in a supporting role.

2nd Sq made good progress on the left.  1st Sq ran into MG fire from the white building while going through the field.  Worse, the germans shelled the hill knocking out the 30 cal.  Ramsey got everyone moving again when up the road comes... 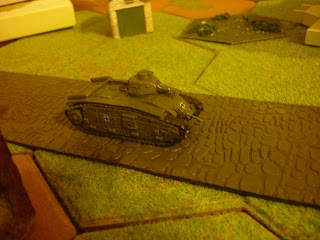 Under new management!
The sherman trades a couple shots while... 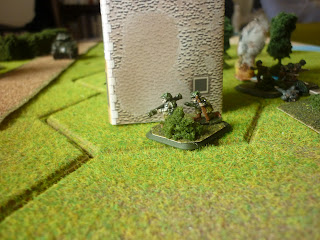 These fellas come up and miss!!
﻿
﻿
SSgt Taylor has run into a ATG in a swamp just past the forrest.  He leaves part of the squad to keep it busy and moved his BAR team to fire on the white house.  Sgt Saunders is ready to assault into the house but a new german squad is detected off to his right.  The eagles are now outnumbered. 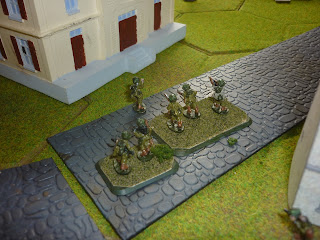 With a shout Saunder's men move across the street
but are pinned down.
SSgt Taylor, seeing this rushes forward with his BAR team and enters the house.  His three men dispatch 3 germans and watch the other 2 leave by the back door! 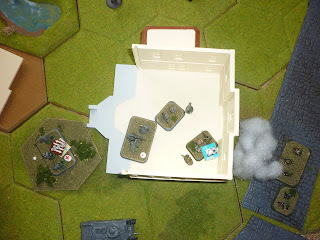 SSgt Taylor faces the second floor occupants!
Sgt Saunders on right with smoke screen
A pitched battle ensues and the 2 MG teams from upstairs with a german NCO come down.  This pits 8 germans against the 4 eagles.  The eagles hold their own hiding behind furniture as the german MGs try to find them against the thud of hand gernades; 1 US falls against 2 germans.   Both sides morale holds.
The next card is... 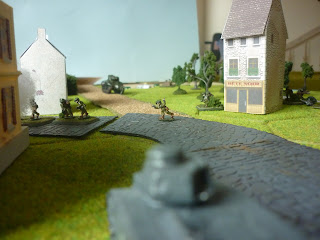 Lt Ramsey runs across the road amid flying lead yelling at
first squad to get in that building and they follow the young
officer.
Bolstered by 11 fresh eagles the americans quickly throw the germans out of the white house.
With their main posiiton gone the germans withdraw out of town in good order.

Post game SSgt Taylor is upgraded to a Gr III leader.  He is also put in for a Silver Star but that is denigned.  Capt Newsome is delighted and promises the platoon an extra squad/armored car or ATG next game.  In addition, Lt Ramsey was allowed to brief this action to Gen Taylor in person who was impressed.  Now he knows Gen Taylor as an NPC.


Great game particularly because I haven't played in a while