Been a myriad of gaming here this month.  My brother visited so I always try to put on a good show for him.  Played a battle for Berlin which was enjoyed and drew the attention of his sons.  ( Come closer little fishy!) 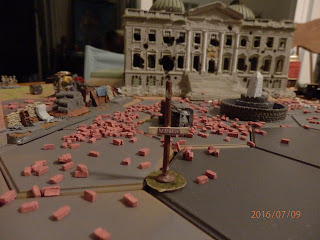 Not Manhay but the board looked great!
Bought Ambush Valley as a source book and it is fantastic.  Thought I knew a fair amount about the units that fought there but I am learning alot.   One of the things I learned was that the Army of South Vietnam wasn't all that bad.  Most of the time they could hold their own.  It was their regional forces ( Ruff-Puff) that could have been much better.  So I had to try to put together a squad for Platoon Forward.  I only had 9 soldiers painted up and my leaders were not even based yet so it was an ambush of a relief column at night in 1964.  I rolled up the characters and they were quite interesting:
Trung Si  (Sgt) Dang Tong  orphaned; worked on a farm for his uncle, joined the army to escape
Evil/  Pleasure              Gr I
Ha Si ( PFC) Tran Bihn   petty thief, joined to escape jail     liberal/  Alcohol                Gr O
Thieu Uy  (2LT)   Pham Chu    son of a catholic govt official     Inept/  religion               Gr I
1 M8 Greyhound     1 sq 8 carbines 1 BAR in Halftrack   NL/ 8 morale    1 jeep w 50 cal and 2LT 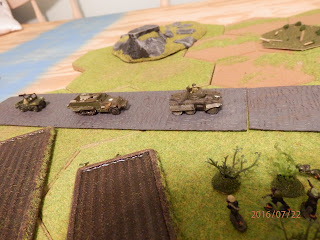 Charlie waits to spring the trap

Life is not too bad Tong, thought as they rolled down the highway.  He had just been promoted to Trung Si so few people would mess with him.  His officer was harmless and kept out of his way though he had insisted on coming tonight with the vanguard of the platoon.  He wasn't a coward, just belong with a textbook in his hands; not out here where men were men and it was survival of the fittest.  Bihn hoped he would see some action tonight.  He was not against the VC, he just liked to kill things and test his mettle.
Just then he was roused out of his thoughts by an explosion.  The lead greyhound had hit a mine! 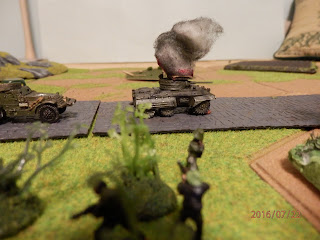 The squad spilled out the back with his ASL breaking left and himself right.  In the dark they started receiving fire from everywhere.  Tong got 6 of his men organized and made their way towards some bamboo despite a MMG. 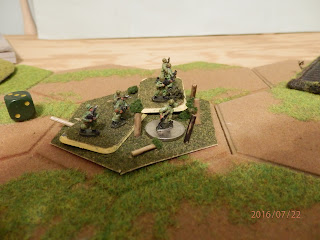 Meanwhile on the other side of the road the LT jumped from the jeep and had the 50 and BAR hammering away at VC as they tried to creep up and overwhelm the small band of men. 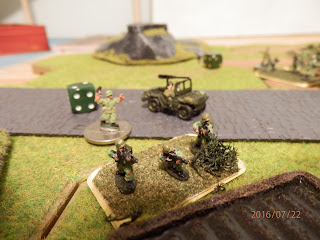 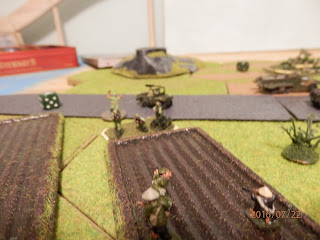 VC launch an attack!  (camera moved due to shock waves!)

Thieu Uy Pham beat off the attack!  As  suddenly as it started the air was silent.  The squad had not lost a man!

Great game that played fast ( 20 minutes) as the VC attack never gained any traction.  With 3 dead they failed a moral test and called it a day.

Post game the LT didn't lose his hesitant leader card despite his showing.  The squad responded well to the Sgt despite his personal philosophy; he kept them all alive.  And Tong has a spat with the Sgt From squad 2 about how to handle men and has made an enemy.  Where will this lead?  Who knows?  I do know that Dang Tong will continue to lead his squad forward!


Posted by FlightDoc at 8:46 PM No comments: