Greetings.  Staying true to form about bouncing around from era to era and project to project I finally playtested my second scenario for my Kolwezi campaign.  This is about 3 company of the French Foreign Legion Paratroopers who dropped into Kolwezi, Zaire in 1978 to re take the town from rebels.  This will be 4 linked scenarios using Grunts Forward.  Scenario 1 is Hotel Impala posted in January of this year.  You will take your squad through all 4 missions.   My squad did well in scenario 1 and now they are tasked with sealing off the New Town.  I picked this action to depict because the platoon ran into 3 armored cars and had to drive them away.  Not often the legion gets to fight armor in Africa!   I played this one twice; once using the new FoF Close Quarters Battle rules I am a playtester for and once using my brew of FOF and Combat Patrol.   Characters:
Lt Bourgain  son of successful business man proving himself.   Idealistic/ Pleasure   Gr I leader
Sgt Popov   Russian, ex soldier and mercenary    Condescending/ wealth  Gr I leader   squad +1 towards him
Cpl Smyrnoi  Bosnian, unemployed and needed a job   Conformist/ violin   Gr O leader
2nd Sq leader is Sgt Lesson  French, son of famous actress who didn't even notice he was gone
Obnoxious/ food   Gr 0 leader
2 x 10 man squad with one LMG, one LRAC, 6 riflemen and 2 NCOs   FoF 10/10 Combat Patrol I added a green card for the rebels and 2 blue cards for the legion. 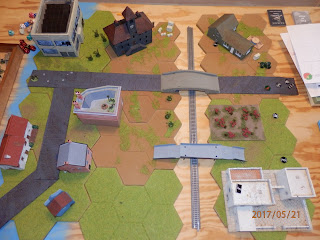 Kolwezi.  Old town to the left, new town to the right.   Rebels automatically get 1 AC at start.   Legion start in old town and must prevent the rebels from entering and traversing through old town.
Legion starts with Sgt Popov's squad minus his LRAC team plus Lt Bourgain. 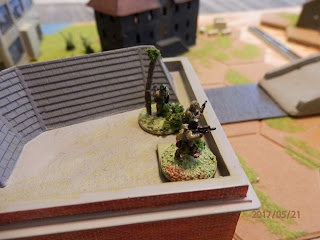 The Lt sets up in the train station (grey building) with the LMG.  Sgt Popov sets up on top of the Bank to cover the elevated walkway. 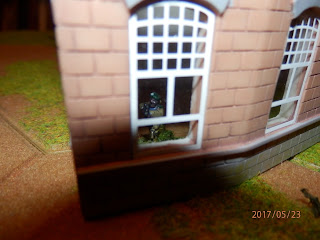 One legionnaire downstairs in the bank to cover the bridge. 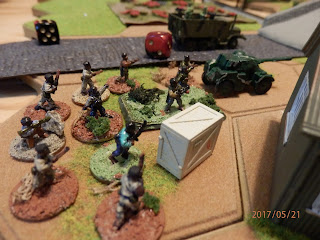 An AC, gun truck and rebels advance towards the bridge while a sniper tries to clear the bank roof. 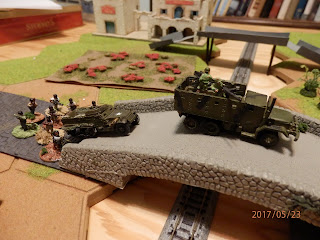 A M3 halftrack joins the assault.

The french LMG keeps the rebel infantry advancing slowly.  but the armor is still posing a problem.. 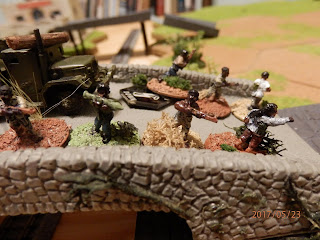 The rebels get to the end of the bridge and, though pinned, appear ready to overwhelm the legion in hand to hand with numbers.  Sgt Popov moves down to the ground floor to get ready for the assault. 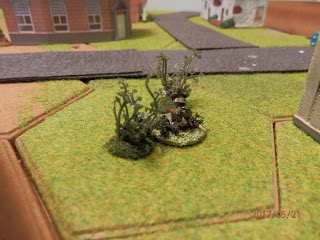 The LRAC team arrives after finding their rocket launcher (think bazooka) in the equipment bundles.  Their first shot misses but the second... 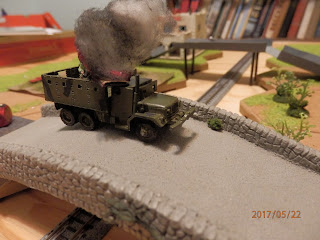 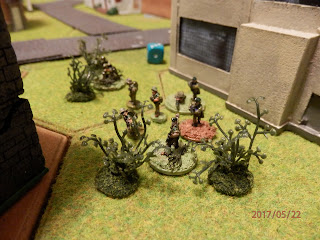 Sgt Lessons shows up with his squad to reinforce the train station. 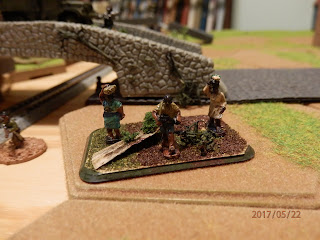 A brief interlude occurs when 3 civilians emerge from underneath the bridge and race pass the train station.  ( cool FOF random event!)  Fortunately there are no rebels nearby to take advantage of this. 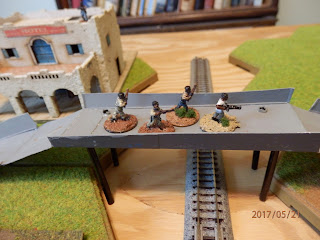 As a last attempt the rebels finally try the walkway but Sgt Popov stops this cold.
Old Town is saved!!

Great battle.  The squad took 1 serious WIA.  The squad's confidence in Sgt Popov grows and they will now follow him anywhere.  (Morale moves up to 12)   I miss my roll to upgrade his leadership however so he remains a Gr I.  In the next battle the Capt gives the squad an additional LMG.  This will be important as the next battle will be a hostage rescue.  Stay tuned...

For those of you that want to try this out Grunts Forward generated the following
1 AC and guntruck plus 2 squads of rebels + 1 LMG team.  2 additional squads and 1 halftrack came on as reinforcements.  I played 7 turns.  The rebels have to either kill the french or exit old town.

A question of Leadership May 1940

As anyone looking at this blog will know; I can't keep focused on any one thing for long.  That is why my campaign systems are designed the way they are.  For example, I had a yen to use my hawk squadron for some reason so I pulled out the squadron sheet.  After a quick look at my notes I was back with them in France though I hadn't used them in about 2 years.

Col Renard had a problem.  Not only were the Germans doing very well in their attack against his country but his third Squadron de chasse stunk.  They had been poor since the war started last year.  They were flying the best plane France had and had 4 kills compaired to 6 losses.  They could not intercept bombers.  Their first CO, Capt Durand had been killed early on.  Lt Leroy had taken over and had done so poor Renard had sacked him 2 months ago.  The acting CO Lt Martin showed some promise but it was too early to tell.  Squadron elan was in the toilet as was maintenance. It is a matter of leadership thought Renard.  Today I will lead these men and show them how it is done!
[ the above is a summary of the first 4 missions for the squadron using squadron forward.  As you can see, a lot has happened and these guys stink with -2 cool points.]
Mission:  Strafe newly acquired Luftwaffe airfield.
1 Patrole  ( top cover)
Col Renard  ( Group Commander)   Unsupportive       Jr Ace  St Cyr grad
SLt Challe  Pragmatic/ religion      green       St Cyr grad
Sgt Lisle    Foolhardy/ position    flying demon     1 kill
2 Patrole  ( strafers )
SLt Brun   Pessimistic/ wealth            1 kill     Veteran
Cpl Chief Prideux   idealistic/ revenge     green   2 trucks KIA
Cpl Chief Sharone   cheery/ wealth          green

Col Renard came over early and talked to the whole squadron.  Told them now was Frances most dangerous hour ... blah blah blah.  He realized he wasn't a great speaker but knew he was a great pilot.  These people needed to believe in themselves and needed to start taking out some Germans. 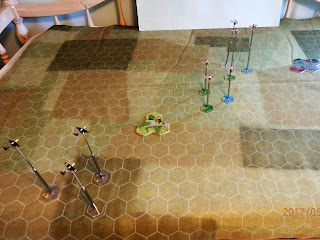 Col Renard saw 3 bandits moving in!  His radio was working ( 40% chance) and he ordered 2nd Patrolle to continue to the target.  His Patrolle would delay the bandits.  ( He hoped he was showing his young officers that mission came first.  They must strafe the field.) 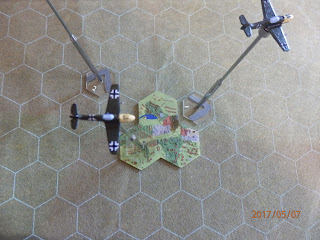 Germans overfly a French town that I recently painted up.

Renard turned his patrolle around and came at the Germans.  His wingmen held on as he was decisive in his actions and that allowed him a shot.  ( his modifiers for being a junior ace helped as well!) 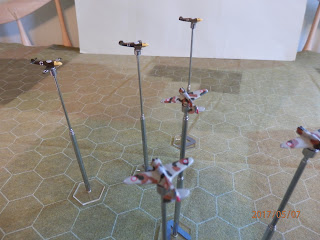 The Patrolle lines up their shots!

With a flurry of bullets they tore through the German formation.  His victim rolled over and headed to earth.  Sgt Lisle's target actually burst into flames!  [ Will admit it was incredibly lucky die rolls but way cool!]
Now to catch the last Kraut he orders a climbing half loop.  SLt Challe doesn't have the skill to follow and Sgt Lisle pretends not to so he is free to maneuver.  [ he is foolhardy remember?] 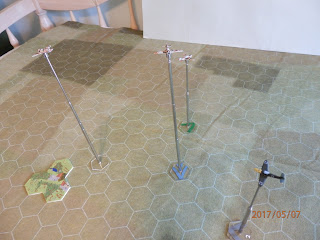 Instead of facing a Patrolle of aircraft Jerry now faces three individual ones including one flown by a novice. 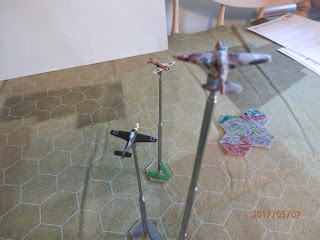 He maneuvers for one shot before he goes.  Col Renard coming up behind but not fast enough.

Bullets riddle SLt Challe's plane smashing cables and instruments but amazingly the hawk continues to fly.  The German, with an experienced frenchman above and behind him dives away to fight another day.

Meanwhile, as the Germans are setting up a forward airstrip an alarm sounds. 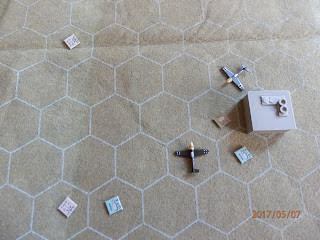 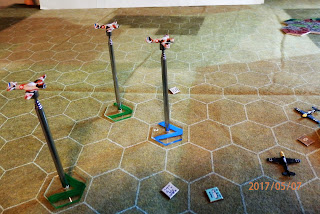 2nd Patrolle beating up the field! 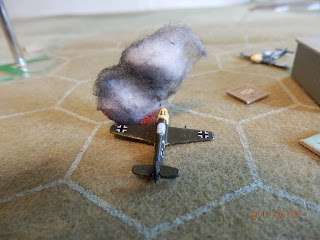 SLt Brun gets one! 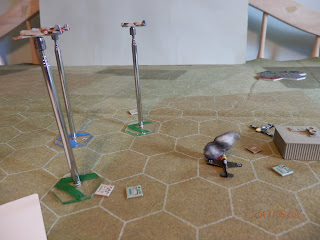 2nd pass as they head for home!  Cpl Sharone takes out a 20mm AA gun.
[ air to ground rules taken from my Brag the Hun Article in one of the specials]

Final event to play out is SLT Challe landing his damaged hawk.  It is badly damaged and he is a green pilot but the hawk is relatively easy to land.  The ground crews hold their breath as SLt Challe nails the landing!  A complete success for the squadron and their group commander.  Airfield operations disrupted, 3 planes destroyed for one damaged.  Truly a question of leadership!
Post game Sgt Lisle ( now with 2 kills) advances to veteran status.  SLt Challe advances to average status.  The squadron cool goes up 1 to -1.

Great game and the squadron needed a big win.  For those of you that want to see if you can duplicate their success the Germans had 3 ME 109Es with 2 Veterans and 1 average pilot.  The airfield only had 2 lt AA guns as they were still setting up.   How will the squadron fair with Lt Martin leading them?  The Col knows what can be accomplished and will not tolerate fools for long.  Stay tuned...


Posted by FlightDoc at 6:14 PM No comments: