Off the Finnish Coast

Have been working on my Russian and Finnish navys.  My tactical rules are done.   So work can progress on Flotilla Forward.   Tonight is a report with my MO4 squadron.
Capt Lt Marinesko scanned the horizon ahead.  His eyesight was legendary in the russian coastal forces since he had been a petty officer before Stalin's purges.  Dmitri had benifited from the sudden openings for trusted patriots to become officers in the People's Navy.  Tonight he and Lt G were to disrupt traffic to the Finnish held islands.   They had a Tral minesweeper as backup.  He hated going out with big ships as they slowed him down but if they ran into Finnish gunboats they would welcome the extra firepower. 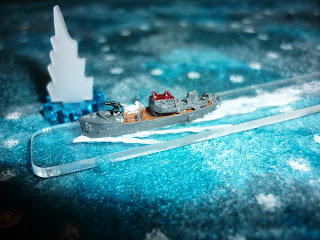 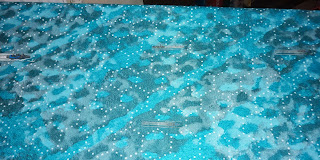 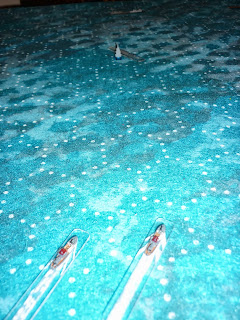 The russians close on a Finnish vessel. 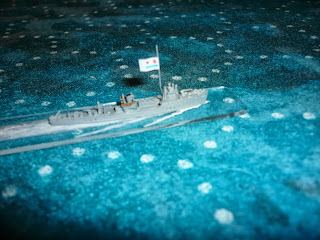 Meanwhile the Cheka  arrives on the scene


The Russians dash ahead and notice a Finnish PG moving in from port.  The Cheka opens fire from a mile. 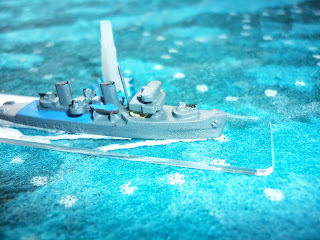 The Finnish gunboat Uusimaa.   ( Too thick with
an extra stack)  I actually found a Japanese MS
that plays this part better. 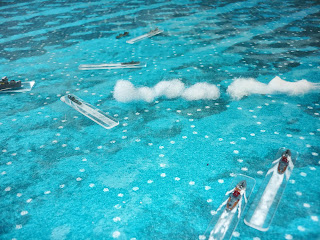 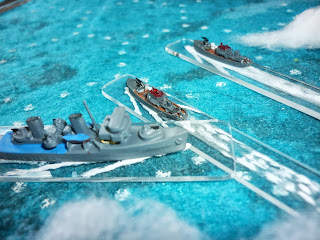 As he plunges through the smoke  Lt Giehorovcev barely
avoids a collision with the Finnish gunboat.  The Finnish
Bofors knock out his aft 45 mm gun and cause heavy damage
to the ship. 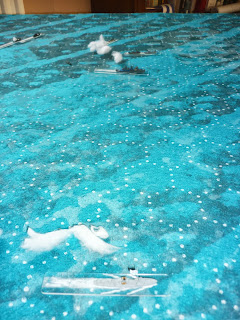 A "long range" gun duel devolps
between the Cheka and the Uusimaa
Range 1 mile
At this point the two MO-4s sink one of the VMVs. 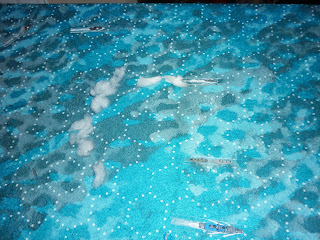 Cpat Lt Marinesko finally sees the merchant ships but then they are quickly obscurred by smoke.  Lt G signals his boat is too bacly damaged to go on.   (failed a morale check.)  The Cheka looses the gun duel when her 4 inch gun is destroyed.   Capt Lt Marinesko, his own ship heavy damaged with a gunmount destroyed, conceeds defeat and heads for home.

Great mission.   Played well and I got my Finns and Russian coastal forces on the table.   My VMV boats are just VAS boats  (Figurehead) with the torpedo tubes shaved off.

Post mission one of the two MO-4 boats will be fixed for the next mission.  Lt Giehorovcev meet Capt Lt Ivantsov and buys him several drinks.    The Capt Lt is a mission planner so it can't hurt right?!

For those of you that want to try this the Finnish forces are:
3 VMV boats
1 Uusimaa
2 unarmed 100ton trawlers.
the convoy has to traverse the board.  Once they do they will be under the protection of coastal artillery.
Special rule:  If the Cheka sustains heavy damge (50%) it must break off the engagement.

My son will be starting his third year at University this fall; he is home for the summer.  We have always had a good relationship, some ups and downs while he was in high school, but he is a good kid. One of the reasons there have been few posts this summer is that I am consious that there will be few summers left with him like this and I am trying to make the most of it.  Soon grown up life will interfer.  It is a good thing and my wife and I ( mainly my wife) have  spent many years preparing him for it but I still cherish the little boy holding my hand waiting for ice cream.

Unfortunatly he doesn't share my love of gaming but he will play SAGA and Bag the Hun occasionally and does like baseball.  My son likes Star Wars, has Legos.  He came up with an idea-- why not use Lazy TW&T with his Legos?

(I don't know much about Star Wars other than watching the movies.  So forgive me if the details are wrong.)

The Imperial and rebel forces meet on the planet Dantooie (sp?) over a very important foot bridge! 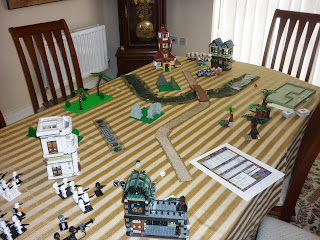 Rebels on the far side of the Map!
I am told by reliable sources that the planet's surface is striped. 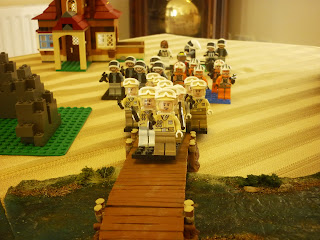 Rebel scum cross the foot bridge!!!   ( Why don't they realize they are revolting against a legitimate governement elected by the people!) 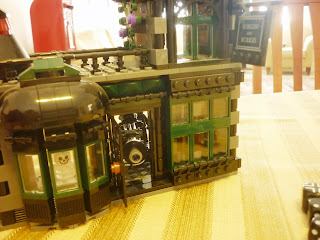 Imperial MMG sets up in a house that looks very much like a Harry Potter house.   It sends the Rebel scum fleeing back across the bridge. 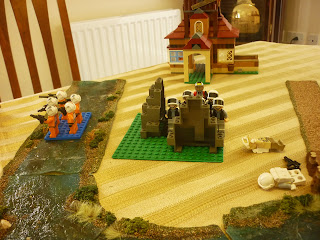 Some rebels cower in the rocks while other cunning jammy wearing rebels (Though I confess they do look stylish)  try to flank the mighty forces of justice! 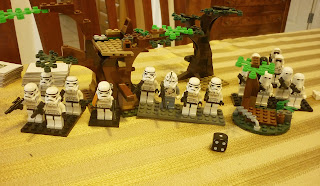 Two squads of imperial troopers lay down fire into the rebel scum.  Sgt "Bad Ass" McGinnus is 5th from left. 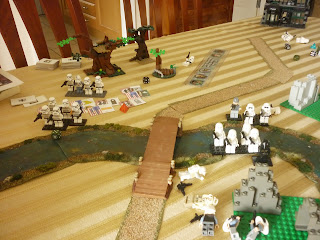 With the rebels supressed, the Empire, I mean the Republic, makes it's move across the stream!! 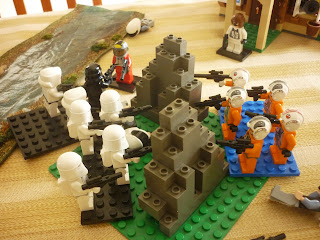 Ferocious hand to hand combat occurs in the rocks by the stream.  Losses are heavy to the Imperial 1st squad.   Sgt BA McGinnus manages to push most of second squad through horrendos fire to the rocks to tip the balance!
With that the rebel survivors slip away across the striped landscap, the forces of justice to weakened to follow.
The rules worked great!
For those of you that would like to try this the Imperial forces were:
3 Squads of 8 men each   2 Gr I leaders, 1 Gr II leader and a Gr III LT + a MMG
The Rebel Scum had
2 Squads of 10 men each with 1 Gr II and 1 Gr I leader and a Gr III Lt + a MMG


Most importantly we had a blast.   It was as good as getting ice cream.