For want of a nail The death of a Marine Aviator

Have been busy with Squadron Forward and with painting my Welsh.  Several weeks ago was a guest at the Honorable Artillary Company in London for a formal dinner.  The English do fomal military dinners well and most of the US traditions actually date from the English.  The Honorable Artillary Company was formed before the ECW and have a very nice museum.  They are also an active regiment.
A fabulous time with a string quartet, horn and bagpipes.  All my other pictures have folks in uniform but it was a grand time and I would like to thank the British officers for sponsoring the event.

Corsairs arrived in Guadicanal early 1943.  My Jolly Rogers are a Corsair squadron in the 'canal.  They have flown 2 missions and not faired particularly well. This is where squadron reputation comes into play.  They have 4 kills against 2 losses.  Not terrible but they are flying Corsairs against Zeros and Vals.  Squadron Reputation helps level the playing field.   That kill ratio would be great for my Greek 18 Mira flying PZL 24s but for the Corsairs it is average.

Capt Sanford was leading a patrol of 4 planes up the slot this morning.  The squadron was light on experience so he was taking his XO and 2 of the more experience 2LTs.  If he and the XO bought it 1LT Cohen could step in as he already had 2 kills.

During the flight up the slot LT Jones noted his manifold was not working properly.  He radioed in to lead and after a brief discussion it was decided that the engine was running smoothly enough that he would not abort.  Capt Sanford really did not want to be down to 3 Corsairs facing an unknown enemy.  It was just manifold pressure and it did not seem like it would impact any battle.

I am sure you have all heard the story of a horse that has a loose horseshoe and it is not fixed for want of a nail.  No one thinks it is too important; afterall, it is just a horseshoe on a horse.  Well eventually the horse is placed in a critical position, either moving supplies or carrying a king, and slips and falls off a bridge due to failure of the horseshoe.  Thus ends the kingdome or the battle.   Thus the phrase, " For want of a nail..."  Keep this story in mind as we think of this simple manifold on the Corsair engine.  Afterall, it is just the manifold and the engine is still working...

While on patroll the flight gets information that there are Vals coming down the slot and they are vectored towards an intercept!

Since Capt Sanford gets good position on the Vals he decides to have each element go after a trio and deal with the escort as they appear.    The american aim is poor however with 1 Val damaged and 1 Val going down to the Captain's 6 brownings.  Lt Jones is able to keep up so far.    The 3 Zero escort, caught in front of the Vals whips around and come after the Yankees.
A Zero quickly slips behind Lt Brown and before anyone knows it his corasir is spinning towards the Pacific.   A good chute is seen...

Squadron Forward has a random event called a "Gut Check".  It is a morale check for an individual pilot.  It is modified by many things to include leadership, character and plane status.  Guess who had to take a Gut Check?   Lt Sam Jones.   Guess who missed passing by 1?   Guess what modifier I gave to a corsair with a bad manifold?  Now most men in combat won't run away, they don't want to leave their buddies in a lurch.  They just don't want to expose themselves to much danger.  Thus Lt Jones moved to the edge of battle and was hesitant to mix it up.   This caused two things:  Capt Sanford lost his wingman and the Jolly Rogers lost a Corsair in the thick of the fight.

As Jones circled the battle a Val approached him.  He lined up a deflection shot and it went spinning into the ocean!

Towards the end of the battle Capt Sanford was in trouble.  He had a zero on his tail and took hits to his gas tank and was leaking fuel.  Lt Jones came over to assist but was no longer in formation and still was watching his own six more than Sanfords.   Another Zero joined the fray 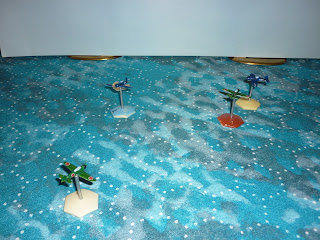 ﻿Leaking fuel and no wingman, Capt Sanford was in trouble.  The inevitable happened.
The fuel ignited and a large explosion ripped the sky.  The death of a marine aviator.

The loss of two corsairs for 2 vals and 1 damaged was a clear loss for the Jolly Rogers.  They lost another cool point and their reputation is down by one.  No one notice Lt Jones' actions in the heat of battle, particularly when he came home with a kill.  Lt Brown was rescued and will miss one mission.

The Group commander decided the Lts are too junior to lead a squadron moving in the wrong direction so pulled strings and brought in an old flying buddy of his known throught the Corps, Scottie McBride.  Scottie is an idealist when sober and tough as nails.   He is currently a Captain but has been many ranks due to both his idealism and his alcoholsim.  He has 3 kills in Wildcats ( I so badly wanted to roll up an ace but all I got was a veteran!), has the leadership trait and ironman trait.  We will see if he can pull the squadron up out of its dive.   Should be a blast to find out!

For those of you that want to play the battle the forces rolled for the Japanese were:
9 Vals    3 Zeros  1 Vet, 1 Avg and 1 rookie.
Zeros start in front of Vals 1 altitude up
Corsairs start at the Vals 5 o clock half the max spotting distance away acording to your rules.  The Japanese Vals are spotted. The Zeros are not.   The americans are not. American altitude is player's choice.