An easy mission in the Green zone

Am becoming more enamored with Force on Force.  Bought their book "Enduring Freedom" and highly recommend it.   Decided to start a squad of the 10th Mountain division.  Played the 3rd scenario taking place in the Sha-i-kot valley 2002.  The squad managed a draw because a sister squad seized the objective.  They had 3 seriously wounded all from Cpl LaBell's fireteam. 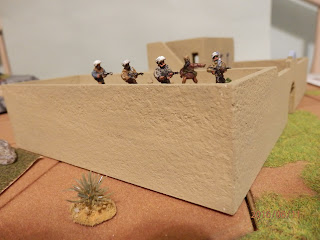 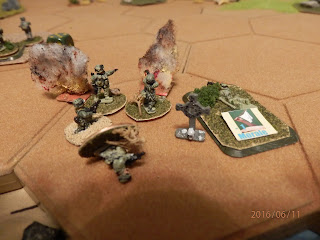 Sgt McMann having a bad day at the office!

After several weeks in the valley the company was pulled back to the green zone for R+R.  Three new troops were added to Cpl LaBell's team and they dropped to "low confidence".  This was a mechanism I wasn't initially impressed with from FoF but it fit perfect here.  The team was well trained and wasn't going to run from a fight but they would be skittish in their first encounter. LaBell was a good leader but was a bit too fancy for the squad. ( Low confidence means they have to check for suppression everytime they are fired on.)
To break in the new men Lt Richards wanted the squad to conduct several easy patrols.  This was the second "easy mission" and there would be contact.   (This was a Patrol scenario from Platoon Forward with the addition of 1 "A" and using the new tables from Grunt's Forward.)
Characters
Sgt McMann   New York Fisherman      Cheery/ Wealth         Gr I
Cpl Adams     orphaned and raised on a ranch    Jovial/religion    Gr 0
Cpl LaBell       Preacher's son               Cultured/ wealth           Gr I
1 Squad and 2 Humvees 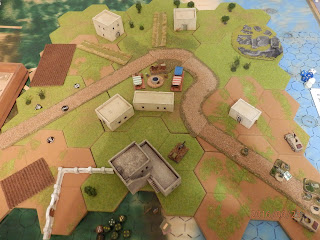 Cpl LaBell's section leads as he is the better leader.  Pvt Wasserman on point. 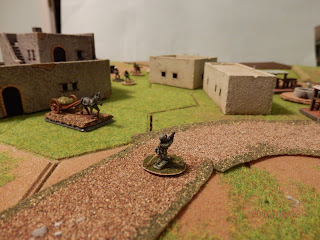 Between the buildings Pvt Wasserman IDs to Tali's.  Fires off a shot and one goes down!

The Tali's beat feet into the near building on the left.  Cpl LaBell''s team comes up to support their Pvt but have no shot with the cart in the way.
Meanwhile, the building on the right also has enemy inside as well as three in the market who... 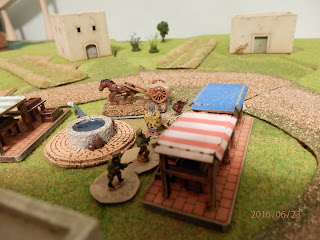 incite the vendors to stop the americans from "invading" their village.  ( Ya gotta love the FoF rules for civilians!) 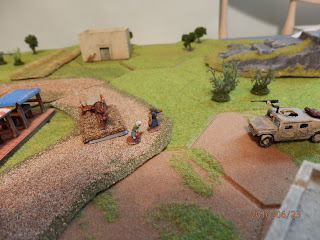 The civilians move out to the Humvee to tell the US what they think of their protection!

Fire from both buildings decimates Cpl LaBell's squad (again) with all four members going down.  Sgt McMann acts quickly.  He sends Adams up on the roof of the leftmost building while he goes to check on his fireteam.  LaBell is gone; Wasserman is lightly wounded and the Saw gunner seriously wounded.  McMann and Wasserman drag the fireteam into a building to hunker down.
The Humvee manages to persuade the crowd to disperse then starts hammering at a Tali LMG with good effect.
As Sgt McMann calls for a MedEvac he is told that intel has IDed the leader of this attack as a main instigator of the local Taliban.  He is a HVT.  ( Cool FOW card!)  This info is forwarded to Cpl Adams who goes to work.  First, grenades go down the stairwell followed by 4 mountaineers.  ( Still like the grenades and close assault rules from Combat Patrol) 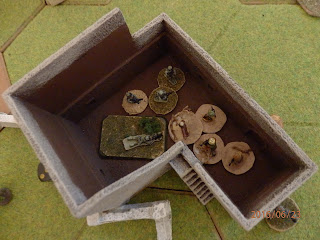 Fierce fighting in the building.  The HVT is the skinny guy in front.

The rebels lose one and take off out the door. 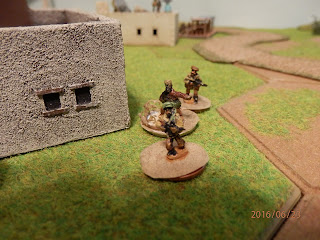 Making a break for freedom!

Despite the best intentions of Sgt McMann and one of the Humvees they all miss and... 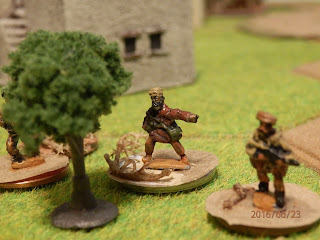 Our HVT makes it into the grove and is lost!

Great game that played fast.   I really like my mix of the two rulesets FoF and Combat Patrol.  Am happy that Patrol Forward works well with both.

The Taliban had 5 KIA.  the US had 1 KIA and 1 WIA ( IH ) and 1 WIA.  I thought Cpl Adams had earned a upgrade to Gr I leader but rolled a 10!  Both casualties are replaced but we do not get an NCO.  Will have to pull from the other fireteam.  The Squad gives Sgt McMann the benefit of the doubt and he is still neutral in their eyes but their confidence has dropped.  Lt Richards has decided to come along on the next mission to see what is going on.

Posted by FlightDoc at 7:10 PM No comments:

Recently purchased "Day of the Rangers" by Force on Force.  Great reference book and I like the morale and skill checks in Force on Force.  The activation/reaction gives me a headache but I love the activation rules for Combat Patrol.  Why not combine them?  Here then is my first attempt at Force on Patrol!  All activation is through my modified activation rules, all shooting done as per Combat Patrol, all morale checks done as per Force on Force.  ( Shooting at vehicles would be done as per Force on Force if there were any vehicles.)  The scenario is right out of Day of the Rangers except I substituted my rangers for theirs.  Thus Lt Concepcion becomes the convoy commander and Sgt Chin is squad leader of the Ranger squad.
Lt Concepcion  Son of a wealthy family/ proving he is tough.  Gambler/ govt.    Gr III
Sgt Chin  from a small town, joined after HS   Pragmatic/ position    Gr I
Cpl Krynawski  orphaned/trouble with the law  Jovial/wealth           Gr I
Cpl Street   factory worker from Detroit   aggressive/greedy              Gr O

Lt Concepcion is driving in Malaysian APCs with his squad and a squad on engineers.  They get lost on the way to a shot down helicopter and ambushed.  the APCs are destroyed.  They have to rescue the wounded driver and hunker down for 8 turns until relief arrives. 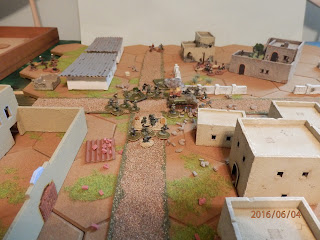 Initial set up.  Cpl K is behind the APC with the LT.  Sgt Chin and Cpl Street are behind.  Engineers are this side of the APC. 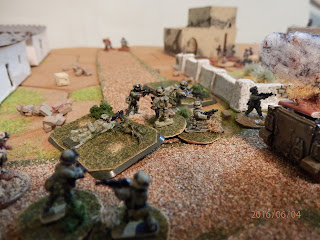 Sgt Chin pointing towards the source of fire. 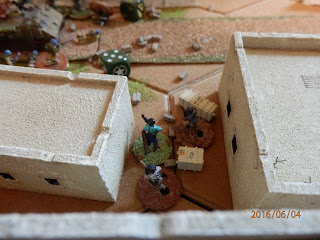 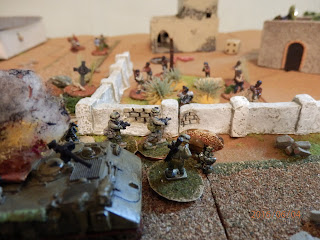 Initial fire from Somalis hit Cpl K and he goes down.  The LT comes to check.  Fortunately a bullet only grazed his helmet!  ( Rolled a 6 on the first aid chart.)

Sgt Chin directs Street's half squad to lay down fire while Cpl K's team tries to free the wounded driver.  They couldn't get him out!  ( 2 D8 rolls where I only needed a 4+ and I couldn't get it.)  Finally LT Concepcion comes over and they get the driver out just in time! 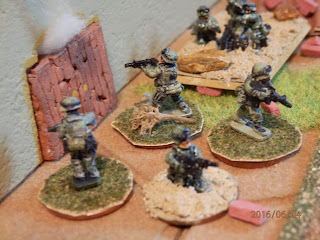 Meanwhile the engineers blow a door so a MMG can set up inside. 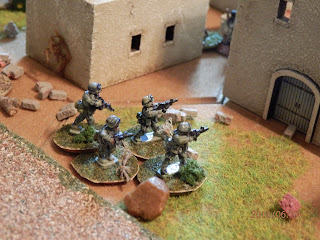 Another engineer team assualts a building.  They actually make a capture! 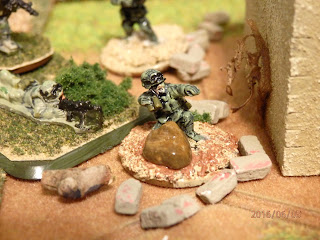 Cpl K covered by a SAW peers around a corner before advancing!  His team would take out 3 more somalis. 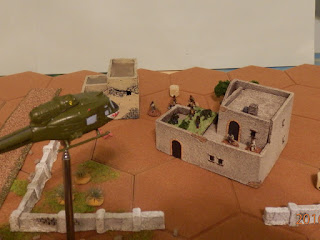 On turn 6 a Little Bird ( in the dark it looked like a Huey!) Clears the first floor roof!

The somalis made a couple more fruitless attacks but the platoon was in good shape when the relief column arrived.  They sustained no KIA and captured 1 Somali gunman.
Post game Sgt Chin is interviewed by the battalion CSM and the CSM is impressed.  Despite the win the squad holds judgement on Sgt Chin.

I liked mixing the rules.  I like the way morale checks work differently on irregulars and regulars for FoF.  It felt like we were facing hordes of gunman.  Will still work on the morale rules but think I am on to something.