The Education of Lt Nguyen

Hope everyone is having a good year.    I have been busy with Covid at our hospital this year.  Did manage to play 1 game inspired both by GMTs Fire in the Lake and Jack's mediocre posts on TMP.  [ I will admit Jack is using Platoon Forward the way I intended it and his terrain and painting puts mine to shame.] On to our story...

The concept of "armored cavalry" was actually invented and developed by ARVN and copied and improved on by the US.     One of the innovators was the 6th Armored Calvary Regiment. My platoon belongs to the regiment and have been in 2 battles.  They won a bunker busting mission and lost an ambush when their accompanying tanks ran away [ check 5 Nov post 2019].  The Armor Plt CC, Lt Qui, was embarrassed and apologetic and promised he would personally help the platoon with their next mission.   The AC platoon has average training and morale but all the leaders are poor.

I have modified the Grunt's Forward mission table for an armored cav unit in Vietnam as follows:

I rolled "Cordon" so the platoon will be called out to protect ballot boxes during a local election in  Cam Rahn 1967.

2nd squad is detached to another site.

1 squad of Ruff-Puffs with a poor NCO and MMG. 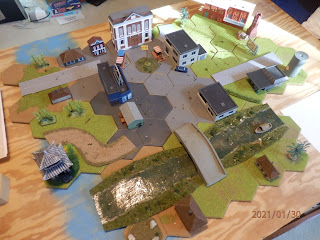 Polling booths set up in front of town hall.    Rumor is that local VC plan to disrupt the election to show it is fraudulent and to prove they can. 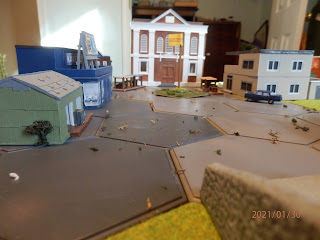 View from across the square... 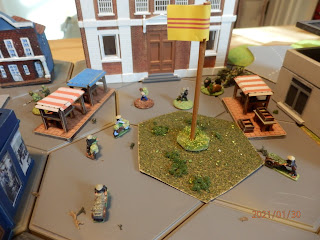 Villagers coming in to work and vote under the safety of the SVN flag... Duc places people at every entrance to the square with the MMG on the roof of the store to cover the flag and the booths.  VC want to disrupt the booths, take down the flag and occupy the town hall. 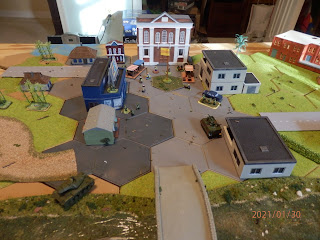 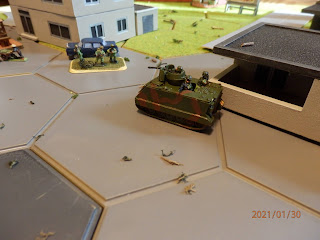 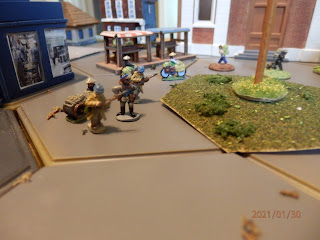 A UN observer stops by to see how it is going... 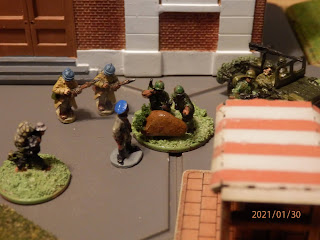 And ends up chatting with Lt. Nguyen in broken vietnamese.    Suddenly... 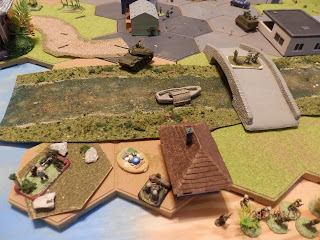 From across the square rifle shots from the bridge.   The Ruff Puffs actually spotted something before it fired!   They missed but at least... 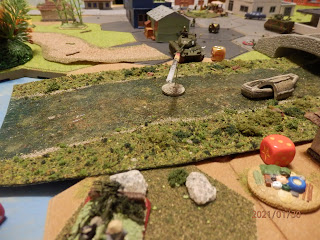 Lt Qui had time to turn his tank around before the recoiless rife was set up and fired.  The round bounced off the he makes short work of the rifle team.   Unfortunately a MMG in the hut nearby kills him as he is manning his MG.  His crew, demoralized will take no more active part in the battle. 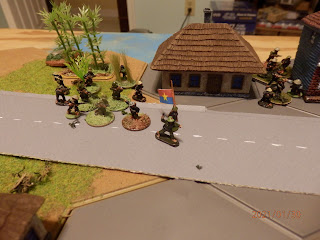 From the left side of the board spring VC determined to give the people free voice. 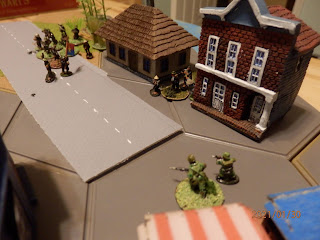 Amazingly these 2 Ruff Puffs win the initiative, hold their ground and fire.   [ These Ruff Puffs are tough!] 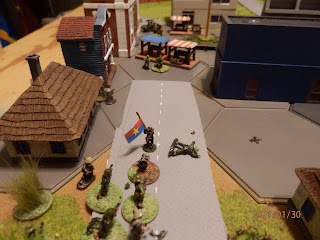 Casualties are determined randomly and the VC leader falls.  The VC morale holds but they will not charge without a leader.  [ I think we can give the people free voice from over here comrade!]  Amazingly the 2 RP soldiers survive the return fire and retreat into the town hall in good order. The leader sustains only a scratch and soon the VC occupy the near ... 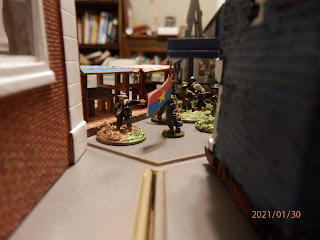 voting booths.   Several are gong to move into the store to lay down suppressive fire as the leader makes a charge into city hall.  Meanwhile... 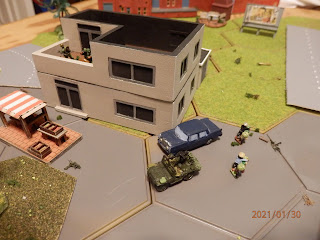 Duc moves his squad onto the second floor and the jeep into a covering position for the flag and city hall.  He yells at the RP Sgt to enter the store with his squad to enflade the VC. 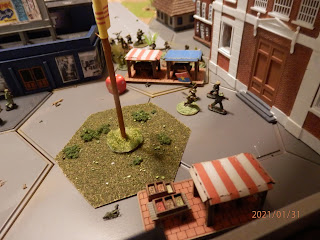 The VC make their charge with 9 men; 5 are supressed leaving 4 to enter.  [ You can just see the RP Sgt entering the store on the left of the picture.]   3 ARVN are in the hall and both sides quickly fail their morale checks and leave the building by side exits; a bit unsatisfying. 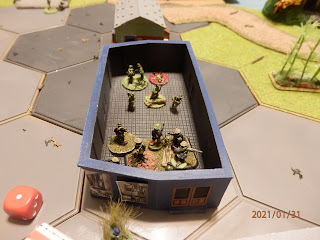 meanwhile a battle erupts in the 5 and dime.   The MMG team is broken which complicates things on the ARVN side. 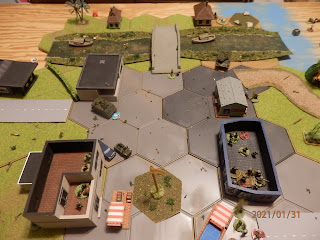 Board towards end game.  Duc on bottom left.  Reinforced by survivors of town hall.   Shooting at the polling booths and at the 5 and dime when they have a clear shot.   A random event brought on a RPG team that was setting up to blow up Lt Qui's tank just as another Walker Bulldog showed up off screen to the right.  The battle rages in the 5 and dime... 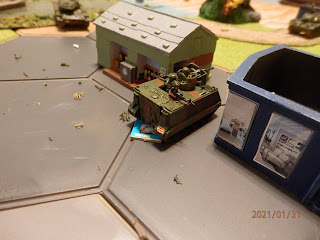 Duc radios Sgt Pham to enfilade the polling booths.  After a delay, the Sgt moves out. 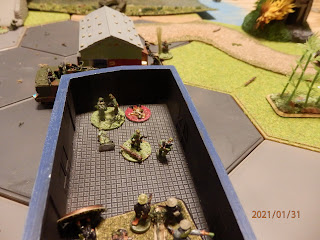 Finally in the 5 and dime the RP Sgt is hit.  The rest of the men break with 2 exiting to the bamboo and the MMG surrendering. 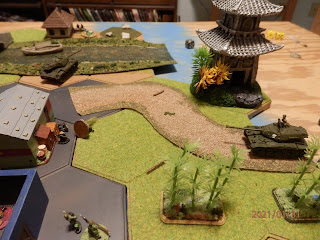 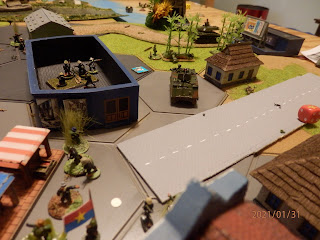 With Van able to hammer their position from the side and no hope of getting to the flag the VC decide they had done what they could today.  The election has been disrupted and 2 booths have been destroyed.  They pull back the way they came.

Fun game that played fast!   In retrospect I should have set up a larger cordon but it worked out.  The Ruff Puff proved tougher than expected.  It was sad to lose Lt Qui as the 2 LTs had developed a friendship and it never hurts to have a friend who owns several tanks!  Post battle Lt Nguyen gained a skill so he looses his hesitancy.  Moreover, he made his leadership roll and is now average!  I guess he learned a lot running this varied force.   Also Sgt Pham's squad is warming to him and he is now neutral in their eyes.

Now that the platoon is improving I can't wait to see what they can do.