Hope everyone had a great Thanksgiving.   I certainly have a great deal to be thankful for.  In your prayers remember those servicemen and women serving far from home.

Am still working on Grunt's forward and got some great looking desert buildings from C resent Studio.  So how do you combine these two?  Have my Italians in Ethiopia of course.  Played a new scenario called "Cordon".

Capt Butro called Lt Chianti into his office.  The heat was oppressive and the ceiling fan was out again Lt Chianti noted.  "LT, please get a dozen men together for tomorrow.  Fr Francesco is unveiling a new monument to Italio-Ethiopean relations in the town square.  We don't want too big a presence lest we scare the locals.  Lt Stinna spoke to the Col and he will have an armored car on standby.  Maybe the priests can do something with these people!"

Mission:  Protect the ceremony.  Barring that keep Fr Francesco from being killed or captured. 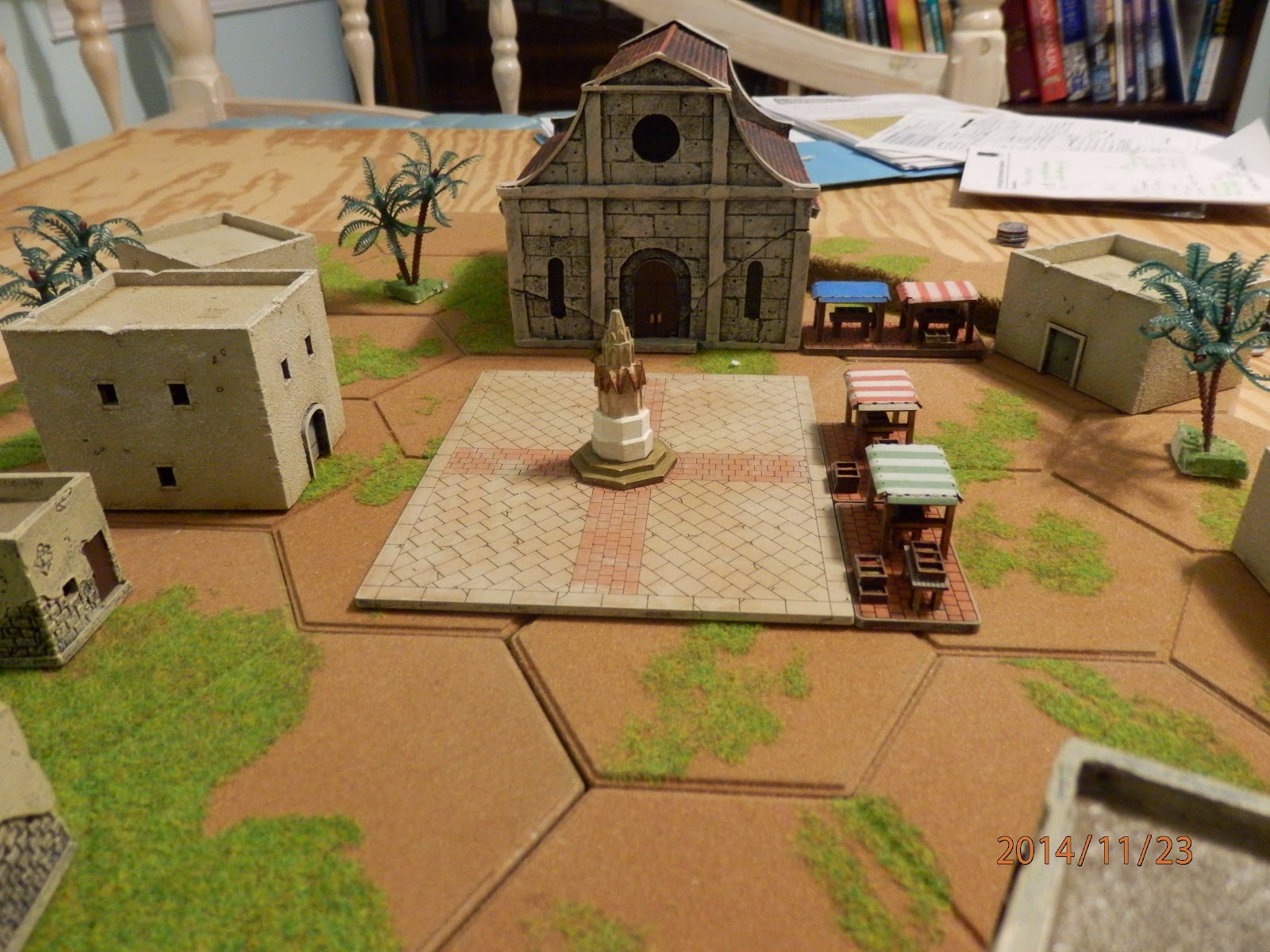 The Village square.  The square and stalls and 2 buildings are Cresent Root.  Top stuff! 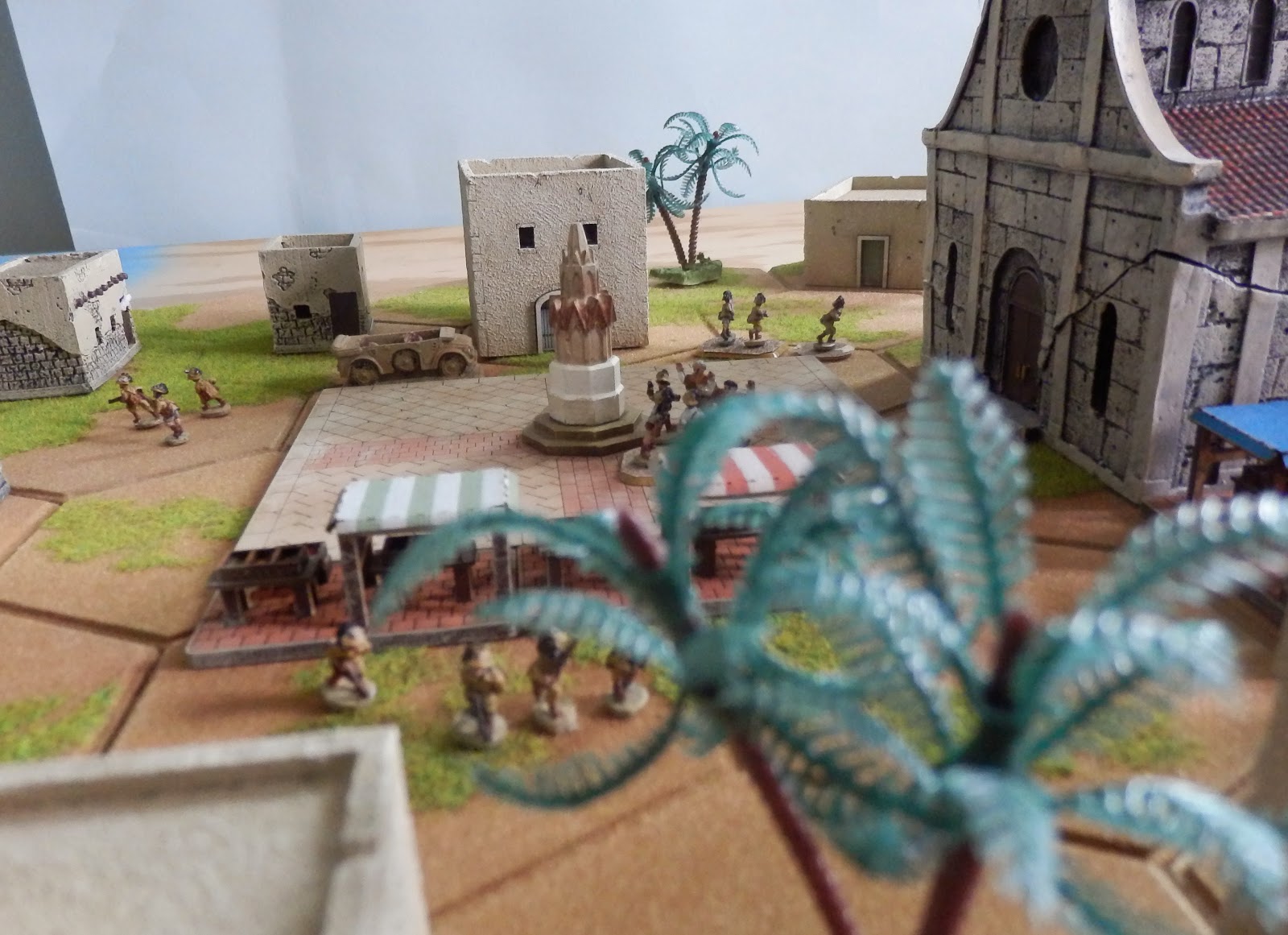 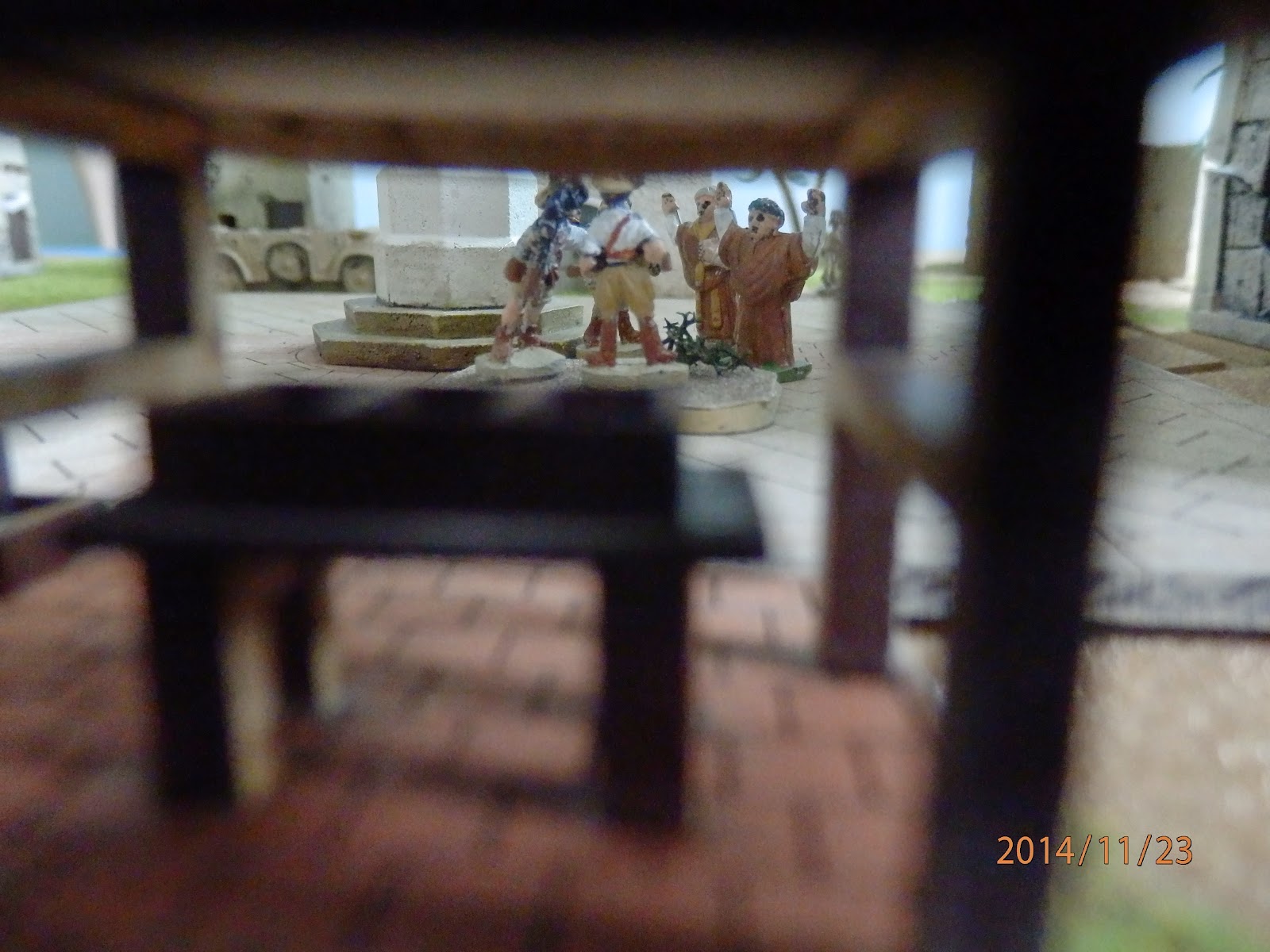 The silence is disturbed by several shots ringing out from across the square.  One building is entered and several more rebels charge the square.   They are quick enough to slay 3 Italians. 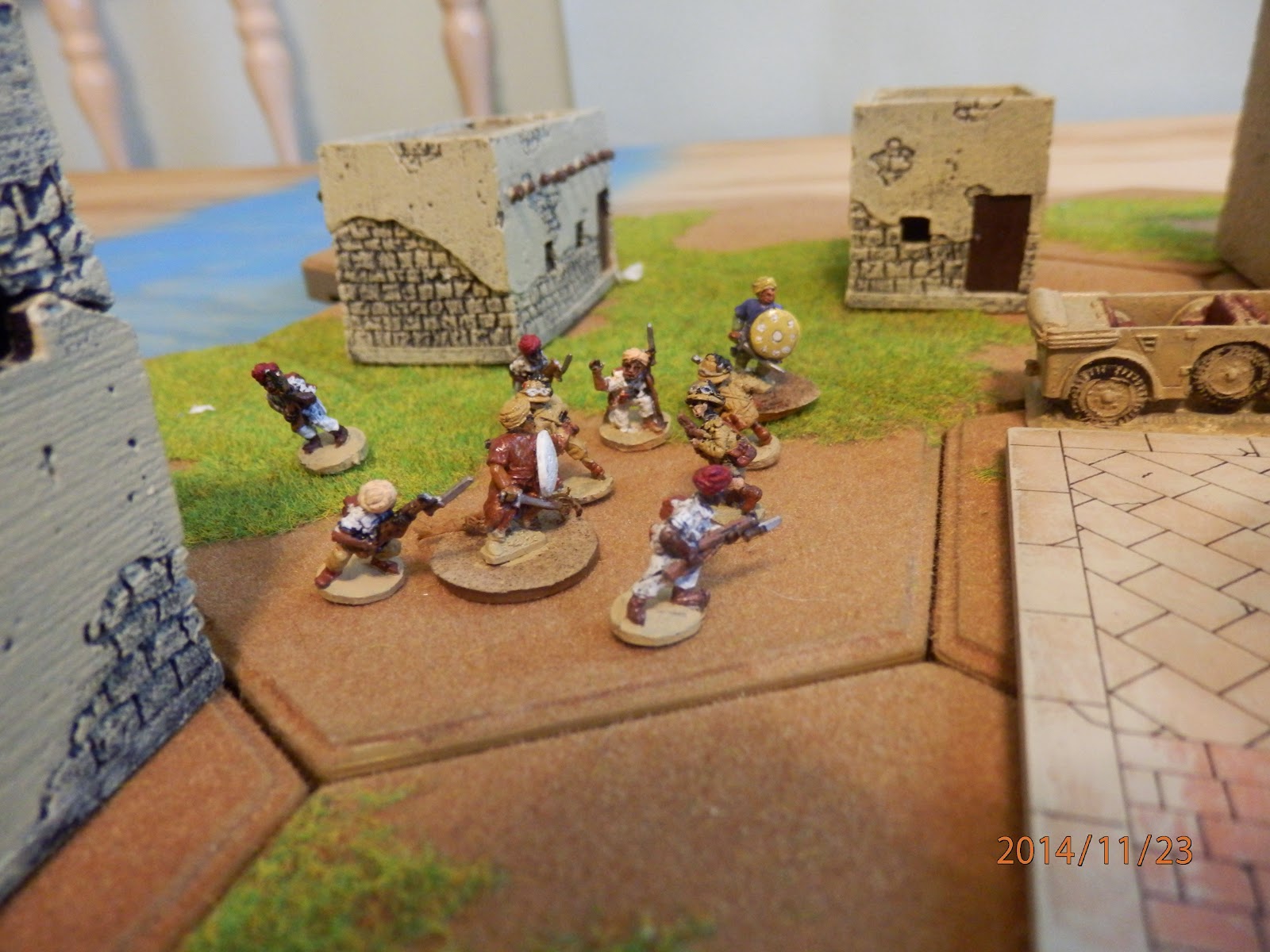 Rebels charge the square.  ( I know they don't look like Ethiopians.  I don't have any yet.  On the christmas list from Peter Pig.)

However the building across from the church is captured along with an Italian LMG.  The Capt takes the preists into the church to protect them while Lt Chianti organizes a counter attack. 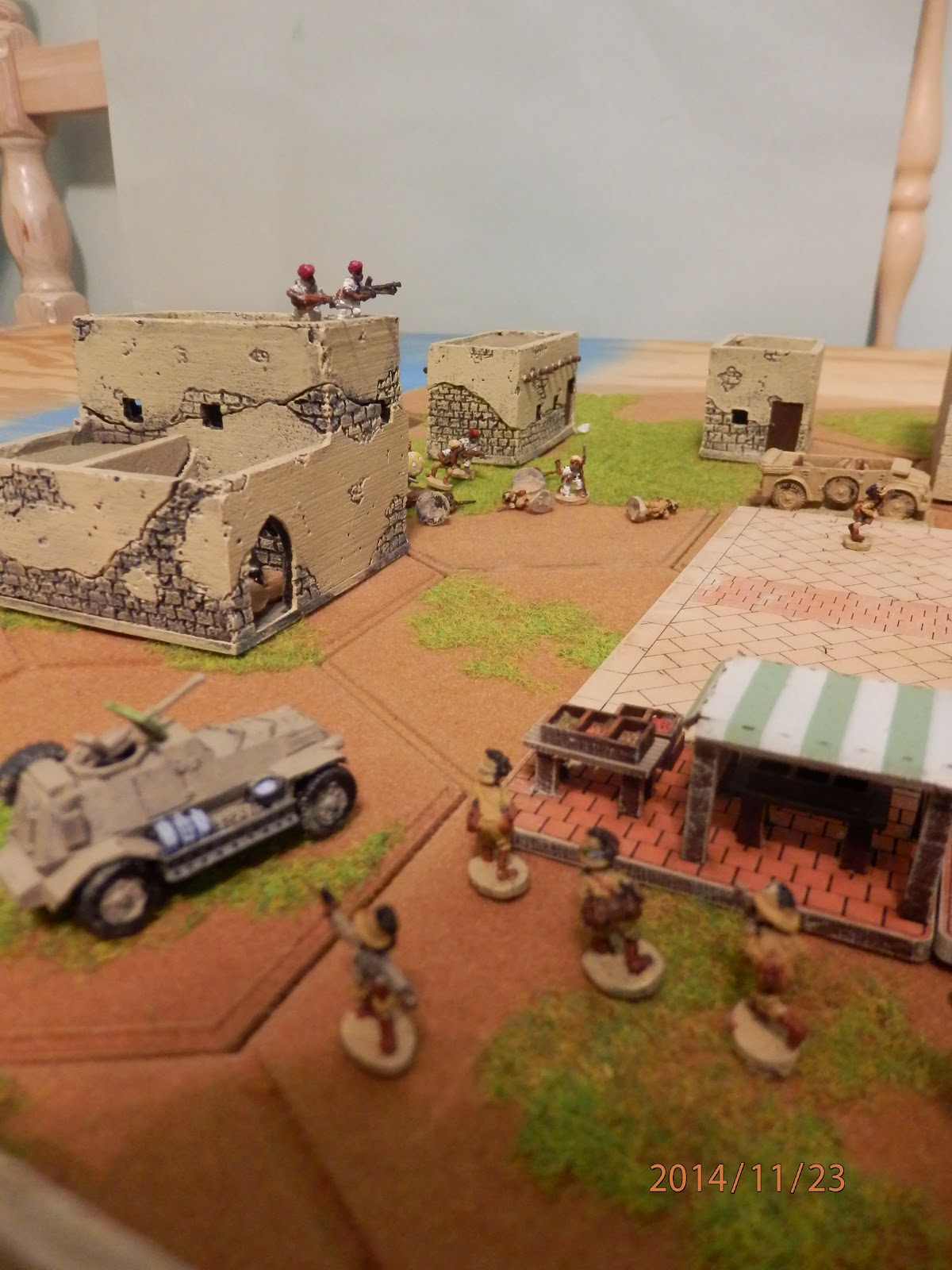 After several effective volleys the rebels, realizing they won't win, slip out into town where they are quickly lost in the crowd.

Short sharp engagement.   The rebels rolled terrible for their blinds.  Of their 4 blinds only 1 reveled troops!  Thus a relatively easy victory.  Post game Lt Chianti goes up to Gr II for his leadership.  Fr Francisco is grateful to the platoon.  The battalion CSM hears of this tale and is impressed.

For those of you wanting to try it I only rolled 10 rebels with a Gr II leader.  The men are poor shots bur normal in hand to hand.  If playing two player suggest you give them another 8 rebels and a Gr I leader.

The Black Rams over the Philippines

I normally play about 2 land games to every air/naval game I play.  Land games are more visually appealing.  ( However see my article in WI last year.)  Even on this blog I rarely get comments about air/naval games.  I am posting this as it really struck a cord with me.
I painted up 6 Georges recently and wanted to give them a go.  I really wanted a George/Corsair battle as the planes are evenly matched.  I played a 6 v 6 without Squadron Forward and it was fine but something was missing.  I then played the following mission using my Black Ram squadron and it was great!  The difference?  The US pilots were no longer nameless; there were people in those planes.  Maj McGee, the naive person living only for today.  Lt Franklin, a former enlisted man determined to make it in an officer's world.  It added a dimension to the game that took it from good to great.  I have been using Squadron Forward so long that I guess I have taken this all for granted.

It was a typical fighter sweep just off the coast.  The squadron reputation was suffering and he hoped some easy kills of antiquated Zeros would perk everyone up.
Characters

I rolled up clear skies and that we met fighters!    I did not bother to roll up the type of enemy we encountered- it had to be my new Georges. 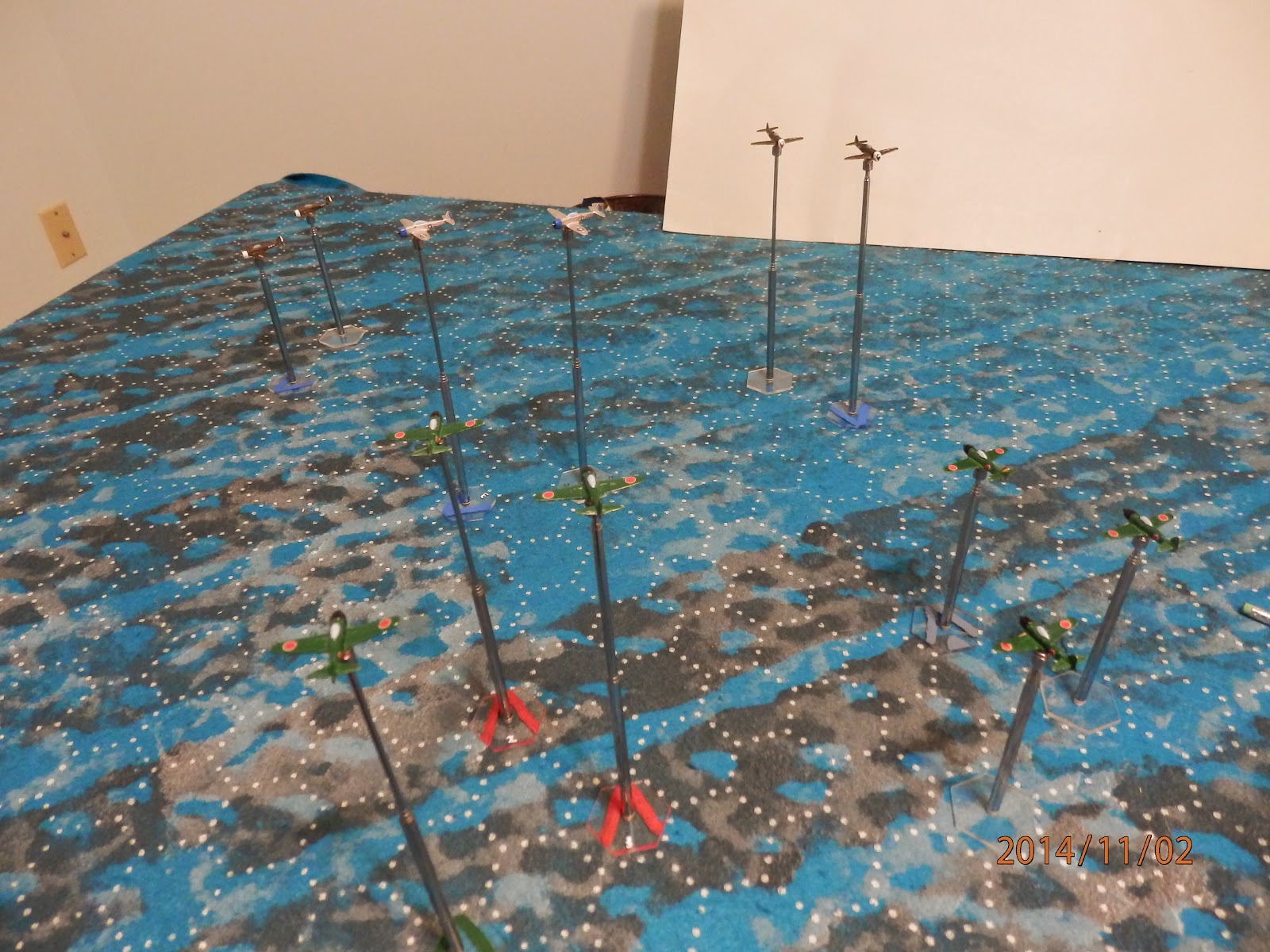 The planes met at 45 degrees to another and the battle was on! 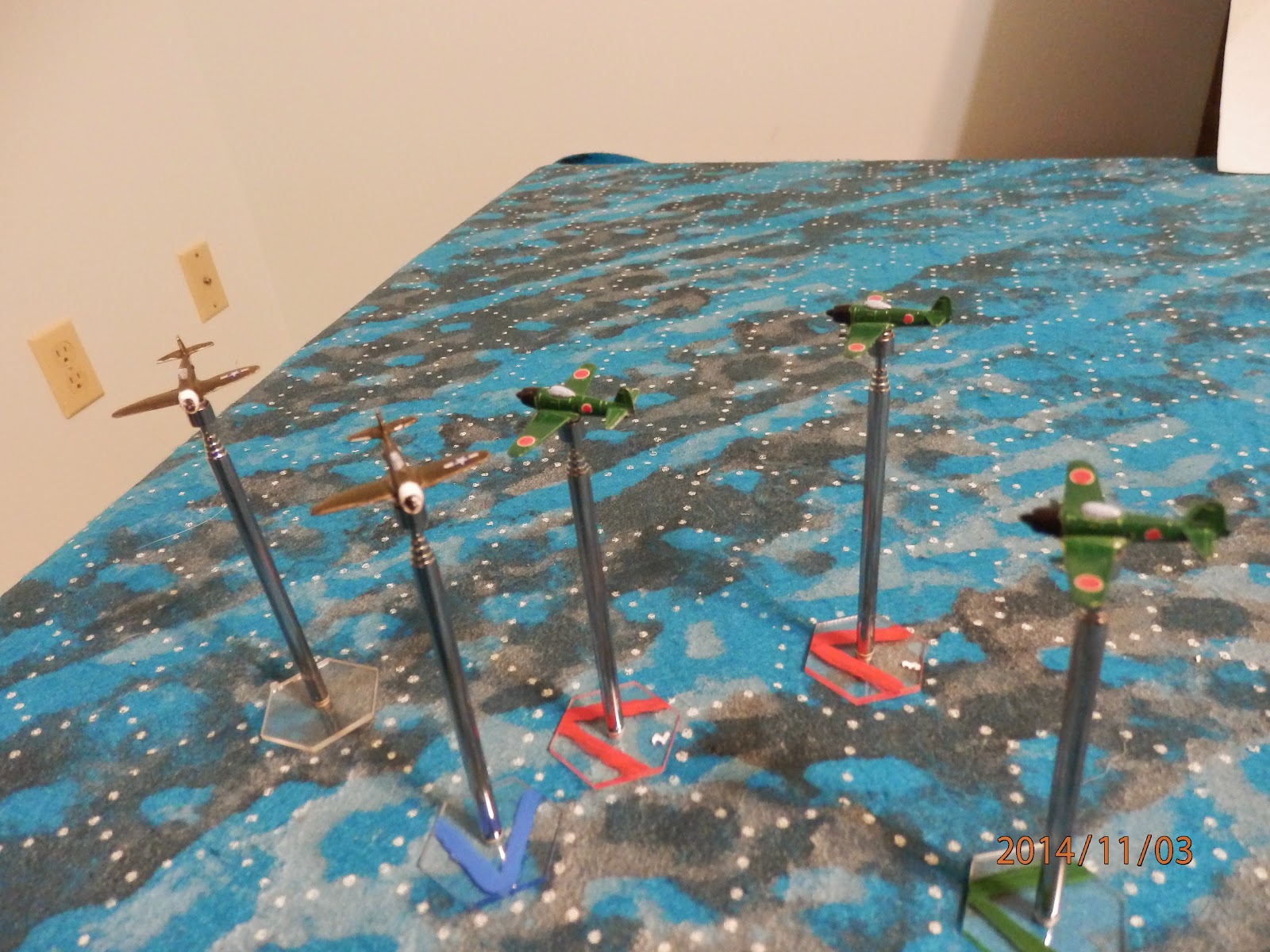 After a close call with a George Dingy felt something he had not felt before--fear.  He had never thought he could lose.   He tried to fight down his fear but could not bear to close with the aggressive enemy. 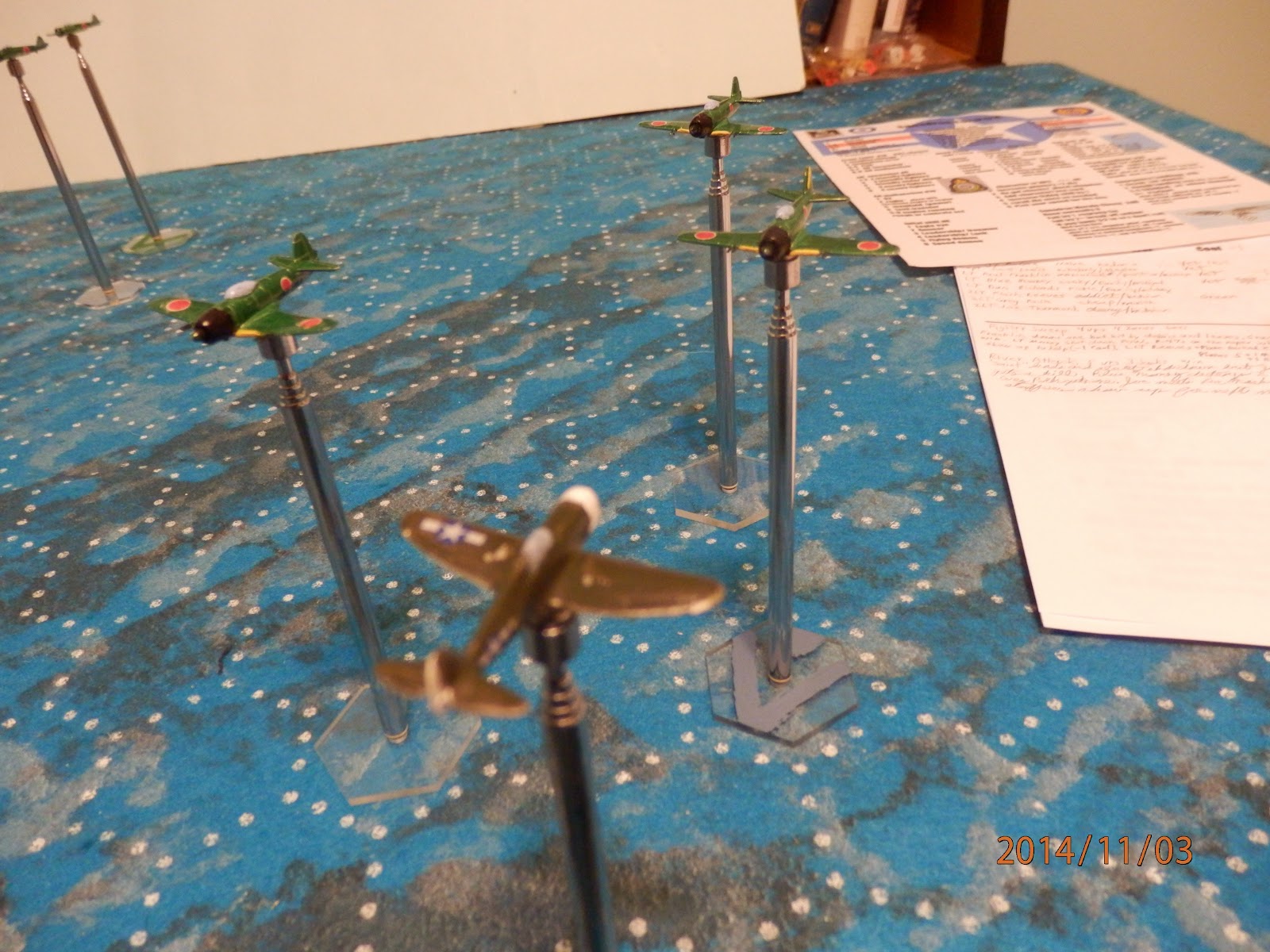 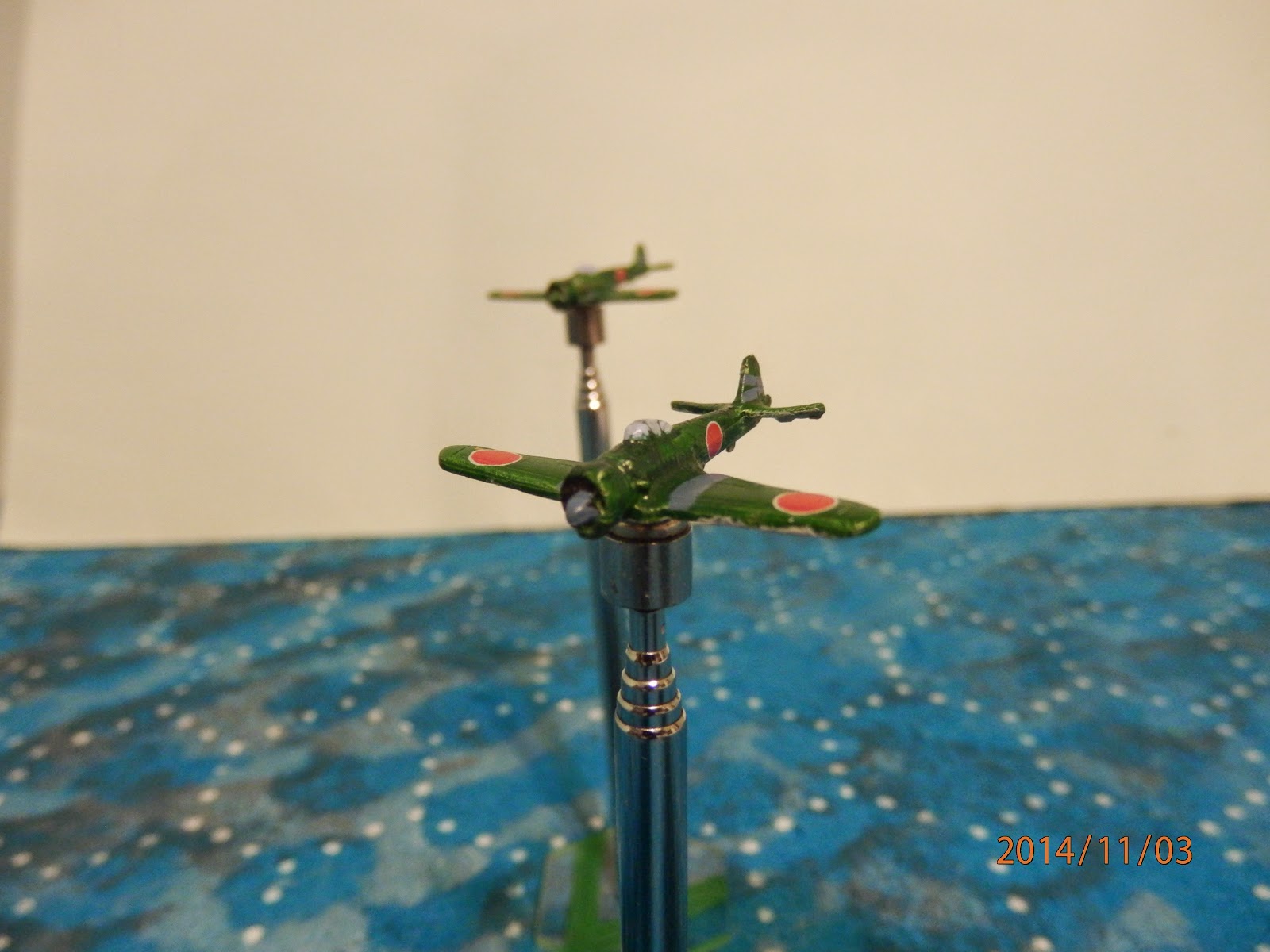 Random event brings in two Oscars to the battle!  Dingy would rather fight the Oscars. 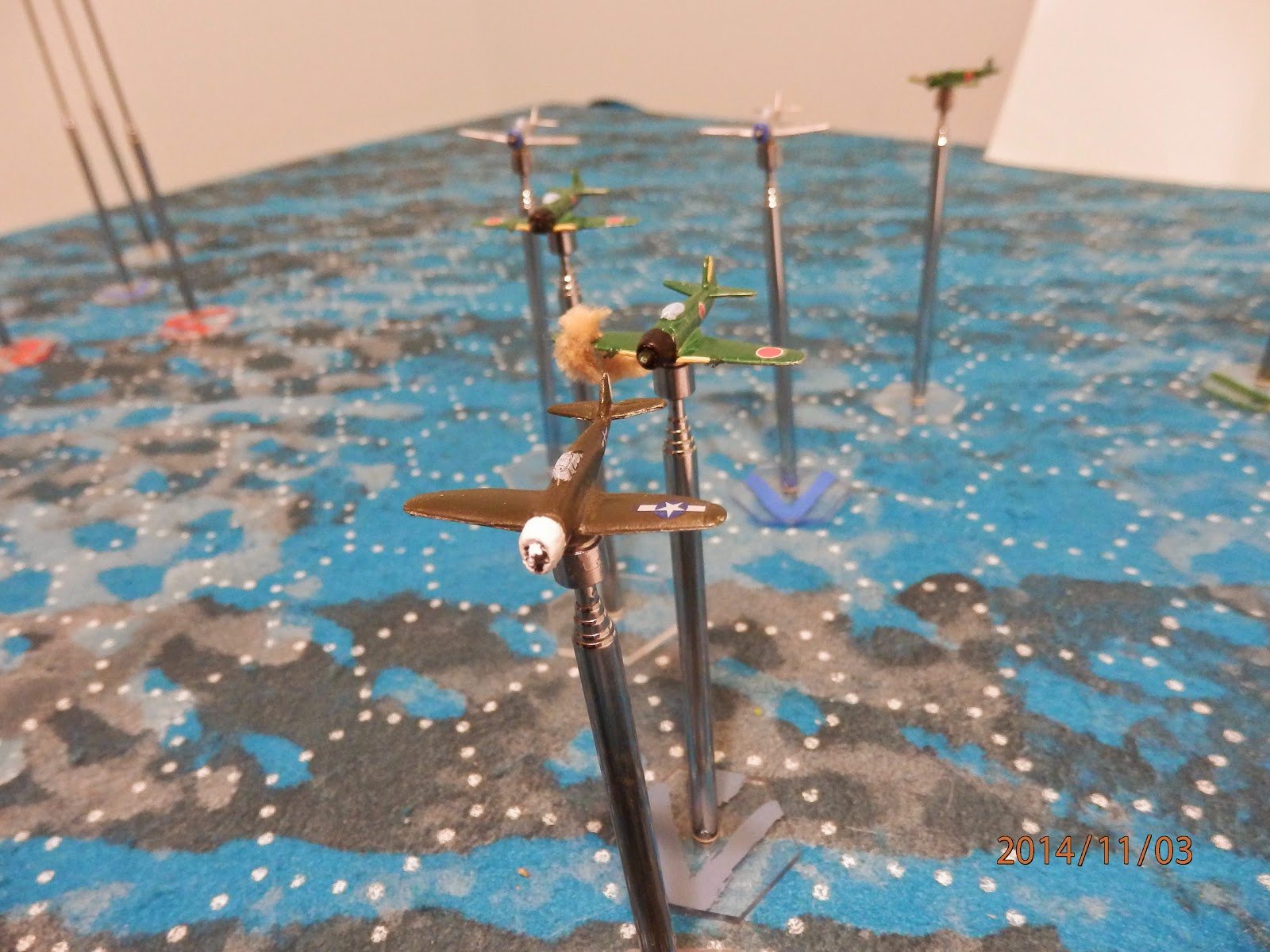 A Japanese ace received a minor gas tank hit from Blue before he latches on to Lt Franklin's tail.  Franklin of course had lost his wingman early in the battle. 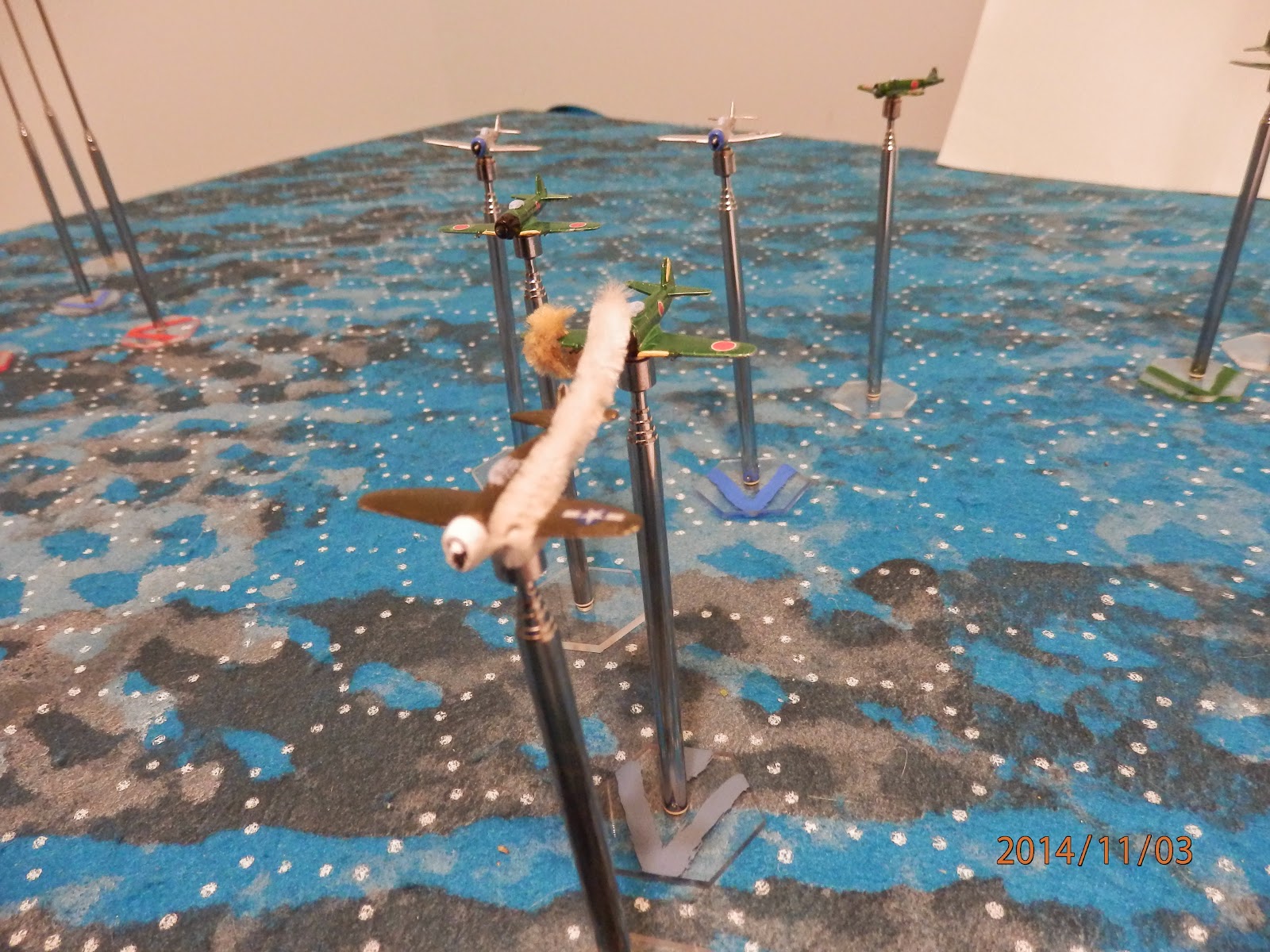 Before Blue can come to his aid Franklin's engine is smoking and he has to bail out!

Fun game but the Black Rams lose as they fail to down any Japanese planes.  The George proves to be a tough opponent, particularly with a skilled pilot in the cockpit.

Fortunately air sea rescue pulls Franklin from the water so he will miss one mission.  Luckily we do not lose any more squadron reputation since we were outnumbered.   Joe Thurmond notices Dingy's behaviour but decides to say nothing at this point since it is his word against a Major's.  [ I rolled a gut check on Dingy and he got "hang to the outside."  I have never got this on a SQ/CC before. ]  So we will see where this goes.  The Group/CC pulls Lt Richards for other duties and he will miss three missions.

So there it is; I fell in love with my own design again and the Black Rams are not doing well.  Their reputation is down and there SQ/CC has a case of nerves.   Will they hit again?  (I would say "likely".)

For those of you that want to play this out the system generated 6 Georges with one ace, 2 veterans, 1 average and 2 green.  On turn 5 two Oscars IIs showed up with a veteran and a green.  Make Dingy hang back for the entire battle.  Good Luck!!