I am done with Release the Hounds.  Am starting to look for a publisher now.  Rich has stated he will publish Grunt's Forward- just need him to get around to it.
Before I get to our game report wanted to say that I went to NAS Oceana's Air Show last weekend.  Oceana is the largest fighter base on the east coast and they put on a great show.  My personal favorite was the WW II Corsair. 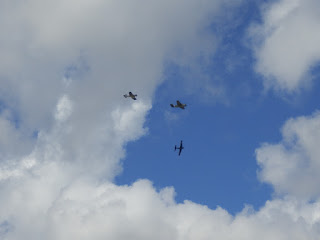 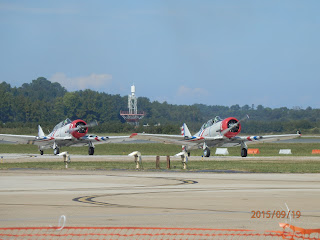 They also had the Geico skywriting team in Texans. 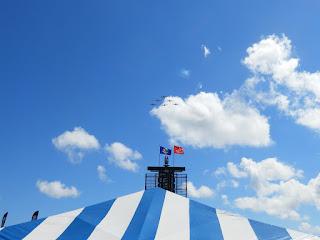 Another look at the Texans.


Now back to our game of Release the Hounds.    As the S-Boats became more successful the British tried to form pickets outside the shipping lanes to detect them.  These were backed up by destroyer "rapid response forces".  I don't have any  "dog" boats yet but do have 2 Fairmile Bs.   I only have one British DE, a Hunt class.   With these forces the British were determined to keep the S-Boats at bay! 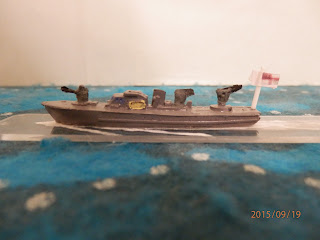 Fairmile B on patrol 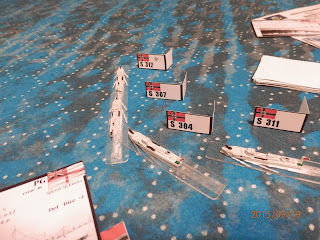 It doesn't work and two Fairmiles start to hammer the lead S boat with 3 inch guns. 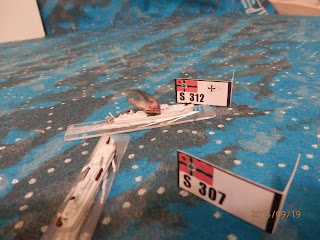 The Flotilla leader is quickly wrecked and set on fire.    It withdraws as the other boats cover. 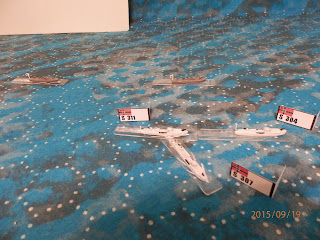 A second boat is heavily damage and retreats.  The German 20mm guns are not hitting anything vital! 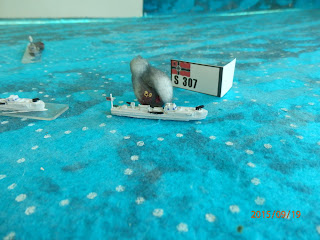 A third boat is wrecked and begins to sink. 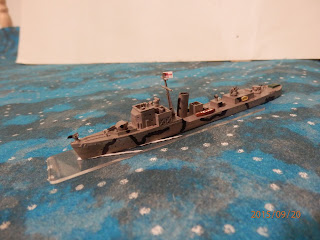 As if it couldn't get worse the HMS Exmoor shows up with a 4 inch gun and starts taking long shots. 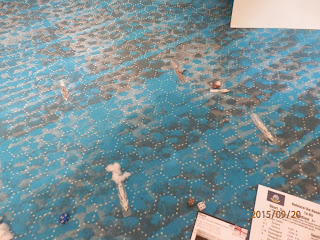 The S-boats scamper away under the cover of smoke.  One ship is lost.  This Flotilla won't be released for a while!

Fun game that played fast.   I thought 4 S boats could handle 2 Fairmiles while they out ran them; I was wrong!


Posted by FlightDoc at 3:18 PM No comments:

Played another Post Captain game last weekend.  Because I am a surgeon I felt I could jump straight to a complicated one involving shore batteries, gunboats and merchants!  I was not disappointed.
The following scenario is hypothetical so please don't tell me the USS Essex was in the pacific.

The USS Essex was hold up in Fairmouth harbor having been chased there by 3 british frigates.  Two merchants were also waiting for the coast to clear.
Meanwhile out in the blue water a council of war was held.  Captain Lyndsey was telling his fellow Captains, " Their batteries are few in number, with the right wind we can sail right pass them and take the Essex and two merchantmen to boot!" 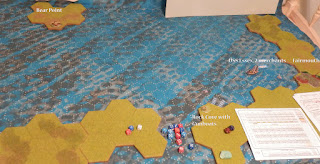 Scene of the battle taken from Google Earth  Capt Lyndsey will enter from the left. 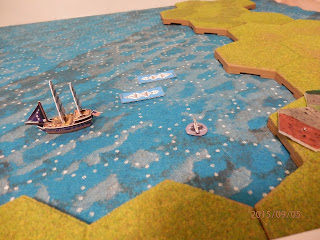 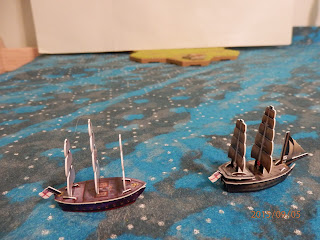 The British fleet enter Fairmouth Roads.  The first two ships where to block the Essex from escape and then take her.  The third ship was to take a merchantman. 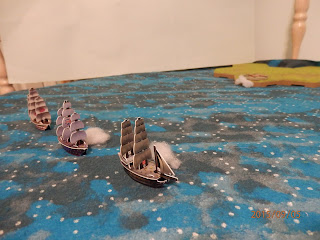 The British engage Bear Point    They manage to damage 6 of the 9 guns. 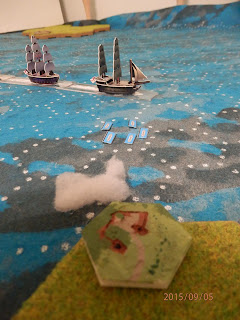 Having successfully negotiated Bear Point, Rock Cove attacks with her 24 pdrs and gunboats. 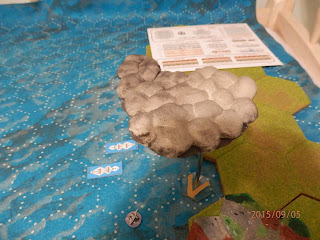 A squall shows up over Fairmouth! 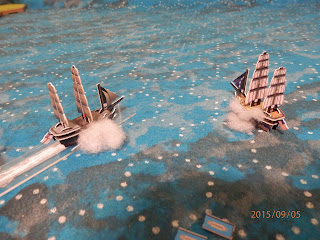 USS Essex manages to clear the decks and fire at the HMS Emerald.   Gunboats try to whittle down the frigates. 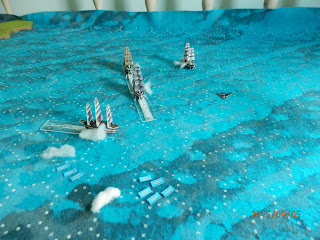 The Essex looses her jib and can't tack.  (Wind moving from right to left.)  The HMS Cerbebus fires at annoying gunboats destroying 2. 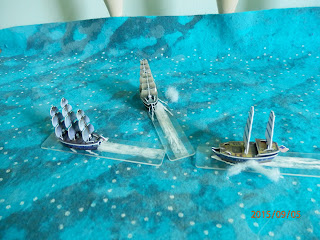 Key moment in the battle.   HMS Mermaid decides to withdraw after combined fire takes half her hull.  HMS Emerald loses steering so has to back sails to avoid falling off the earth! 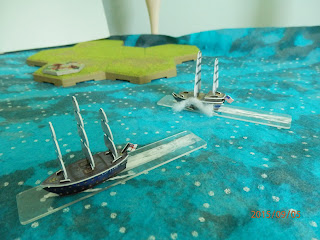 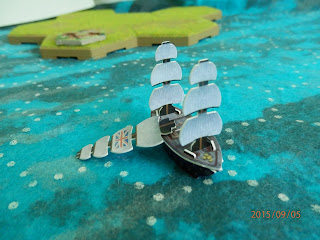 HMS Mermaid is rudderless and now loses a mast which springs most of her sails.   ( the sail is stamped with the British flag so when the Irish make them they know where to send them!)  The USS Essex can't turn around to finish her though. 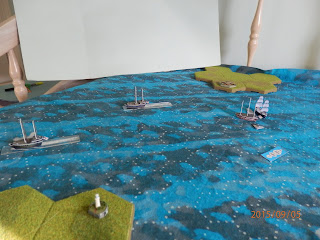 I considered it a draw.  The Brits traded two badly damaged frigates for one merchantman.

The game was a blast again and flowed smoothly.  The additional rules where easily incorporated and I really liked the gunboats.  They have a hard time hitting and being hit but there are a lot of them!