Buffalos of the Far East

Happy New Year!  Hope everyone had a great holiday.  I survived the first holiday without my dad.  Not a lot of miniatures under the tree this year as I still don't seem to want to do that much plus Warlords didn't do their 30% off sale like last year.   I assume the itch will come back.  I did get some Tojo's for my air combat and several A-20s.   Can't decide what nationality to make my A-20s.  Originally I was going to paint them Russian but lately I am thinking RAF.  We will see.  I did get Fire in the Lake by GMT games.  If you want a strategic overview of Vietnam that is a great solitaire game go get this!  My brother got me B-17 leader which reminds my of the second game I ever got, AHs Lufftwaffe.  Hope to get that on the table soon.   Enough prattle.  Remember those buffalos I painted in November???

453 RAAF was dispatched to Singapore as war clouds appeared on the horizon.  It was made up of brand new trainees plus an Ozzie plucked from Spitfires named Sdr Leader Harris with 3 kills to his name. They started out with 3 Average pilots and 4 green.  Due to the situation they get -1 on all replacement and repair rolls.  Their first scrape was a 4 v 4 with some Oscars.  In a fair fight Harris damaged one [ a feat in a Buffalo] and Flying officer Armstrong actually got a kill but was wounded during the battle.  The next day the flight was involved with  4 v 6 Oscars with Flt Lt Dalton leading.  Pilot Officer Jones damages one but Sgts Enderson and "crash" Grayson are both shot down though they are brought back to base.  Dalton brings his damaged buffalo home and crashes on the dirt strip and is invalid home.  Today our brave band sends up 4 fighters led by newly promoted Flt Lt Armstrong on patrol when they are vectored towards Japanese bombers heading towards their airstrip...

Armstrong vectors them in perfectly and they manage to come in below the bombers ... 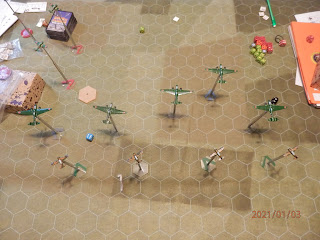 He decides to forgo their training and have everyone take a different bomber.  The plan is after one pass he and Cattle will reform and take on the Oscars... 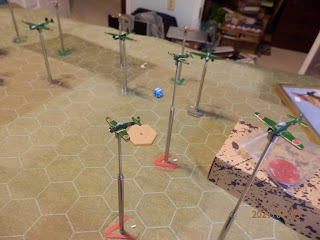 who are caught out of position!   [ Squadron Forward rolled up only 3 but 2 vets and an avg.] 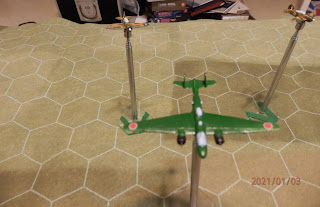 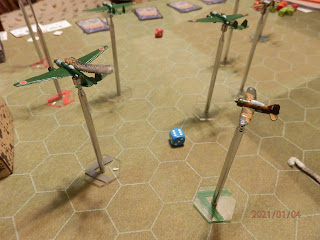 "Cattle is also rewarded as the starboard engine catches fire on his target.  The two officers are not quite as fortunate. 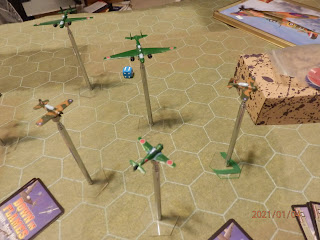 An Oscar pounces on Cattle but Armstrong is there to drive him off. 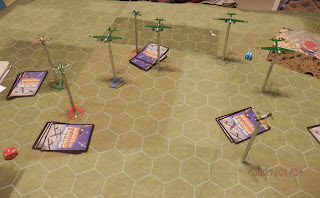 Turn 3 and the 4 surviving bombers drone forward as the fighters dance a deadly dance. 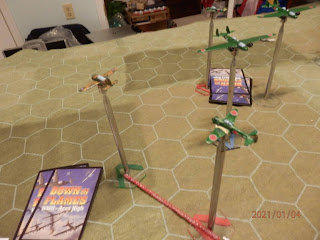 F/S Altman cries frantically for help as an Oscar latches onto his 6. 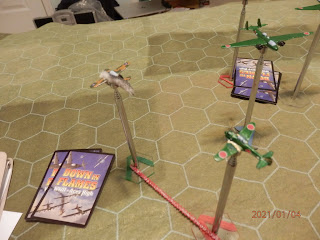 This is not looking good as his engine starts to smoke from damage. 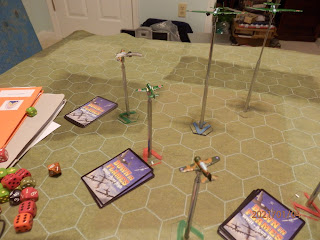 F/S Altman does the only thing you can do in a buffalo; dive!   He gains some space against the veteran as Cattle shows up to try to knock the Jap off him.  Unfortunately Cattle can't seem to land a blow.  Altman does manage to escape almost at treetop level.

With P/O James leaking petrol Armstrong tells his band it is time to break off.  They have done what they could; 2 bombers shot down with no losses.   They will go to an alternate airstrip. 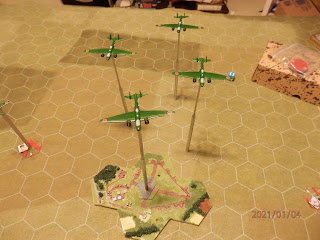 The 4 Japanese bombers complete their mission and return home.   Damage to the airfield is light.  There is more drama to be played out however.  P/O James makes it to the airfield and sets it down perfectly.  After this feat and damaging an Oscar first battle he easily makes his AKOT roll to become an Average pilot.   F/S Altman isn't so lucky.  He flips his damaged buffalo and is badly wounded.  2 Days later he and several other patients are transported south to a main hospital when their lorry is strafed and he is killed.  [ On special events I rolled that he was killed in an accident; go figure poor guy.]   Sgt Cattle Kimburton also makes his roll to become average.   Also with F/S Altman in the hospital the squadron needs a new senior NCO.  Harris picks Cattle because he is the  only NCO who hasn't been shot down yet!  As a Sdr Leader it is his call so Cattle gets promoted.  Lastly Sgt Darley joins the squadron bringing us up to 7, only down an officer.  We have 6 planes with 1 in the shop.  Great fun and I really enjoy the mixture of down in flames and bag the hun.  The battles play fast but still have the chrome I like.

Posted by FlightDoc at 6:56 PM No comments: