Finally collecting some 1/1250 scale ships. These babies are big and detailed!! Of course they are more expensive as well. 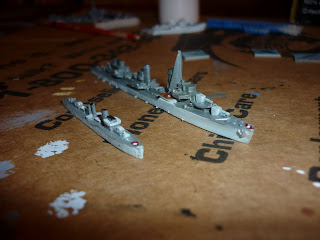 2 MAAS DDs Can you guess which one costs only $2?
Since I plan to play destroyer actions space and money should hold out. I will keep my 1/2400 stuff for the occasional bigger battle but once I saw the detail on these models it will be hard to go back. As you know I have never done any advertising here but I have to say Dave from
PT Dockyards was very helpful in getting me started in this scale. He pointed me to a 1/1200 forum where I found several good deals on ships. The best dealer to deal with has been John Eagan from Eagan Ships. He has not only provided guidance but great deals and lightning fast service.
So I had 5 DDs painted up and my Release the Hounds rules ready. What to do???
Commander Fitzhew stared into the night. The Admiralty had told him German naval forces were making a sortie into the Channel tonight. He didn't know if that meant TBs, DDs or even CLs but he meant to find them before he was found! He was to intercept and destroy the German force. He had 3 "J" class DDs in which to do it. The 3 boats had not worked together before but the officers seemed competent. His own crew on the HMS Jersey were well trained and eager to get a crack at Jerry! 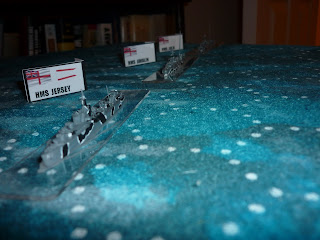 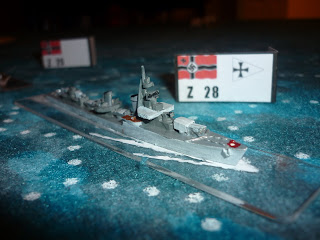 Z 28 out looking for trouble
At 0134 a lookout noted at shape to port at 3+ miles moving away. 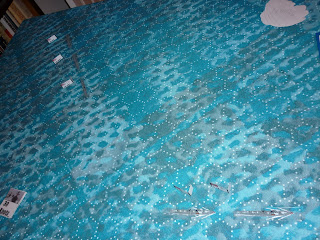 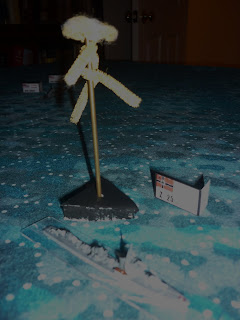 Z 25 under a starshell
He could find no other ships but could see hits on the Jerry ship. (Unfortunatly these were from the HMS Javalin NOT Jersey; need to talk to the gunnery officer!) She started making smoke and turned to port. [Z25 had started flooding, slowed and turned to make smoke] Cmdr Fitzhew turned his column and raced in for the kill. As he did he started taking fire from his front about 4 miles away from another Jerry DD. 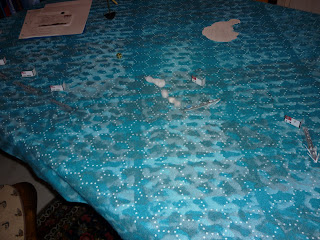 HMS Jersey moving up for "the kill"
Z25 flooding turns to port [center]
Z28 circling back to support [right]
Cmdr Fitzhew decided to ignore this latest foe and concentrate on the first DD. While advancing "A" turret was knocked out by the "long range" gunfire. No matter, Fitzhew was not to be thwarted, "Stay the course!" he bellowed. As HMS Jersey broke through the smoke he saw to his dismay a German DD broadside waiting for him at 500 yards. 6 in guns and 37mm rounds flew into Jersey. Damage over the next 2 minutes was substancial and the call came to the bridge that there was significant flooding midship. 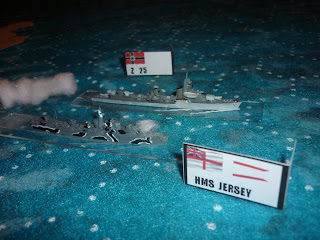 HMS Jersey and Z25 toe to toe at 500 yards
Cmdr Fitzhew had no time to be disappointed. He still had a battle to win. Z25 had stopped making smoke and was speeding up [ she had stopped her flooding] HMS Javalin was 1000 yards behind still in smoke. He had no time for a coded message. He broadcast in the clear,
" Tim, am flooding; pass to my port. Kill the bastard" He hove Jersey to starboard.
LCDR Timmothy Overbrooke aboard the HMS Javalin was shocked by the message coming in over the wireless but as he broke through the smoke understood immediatley the situation. He narrowly missed the Jersey as he started to pursue the German DD. 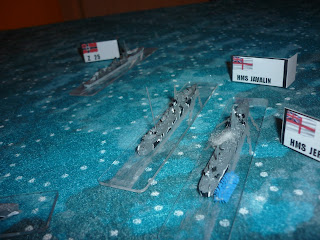 HMS Javalin takes up the fight
After several volleys of gunfire, both DDs fired torpedoes at 1,500 yards. A British Fish struck home leaving Z 25 broke and sinking. Tim Overbrooke took his column to pursue the other Jerry destroyer but he slipped away into the chill night air.
Twenty minutes later, flooding had stopped on the Jersey and Cmdr Fitzhew had his victory.
When he met LCdr Overbrooke later that morning he said, " Tim remember, when it comes to radio discipline it is do as I say, not do as I do!"
Great battle and I really enjoyed the ships. Got some more Japanese and US ships from John and have an order of German and British stuff pending from the San Diego Ship Man. Rules played well though I still have to work on torpedoes.
Scenario Encouter 1940
visability 3 miles wind none sea state calm
3 "J" class DDs vrs 2 Narvik class DDs
Roll for position start
Enjoy
Joe