Bought the FOF book Road to Baghdad off ebay a while back.  Interesting book but disappointed thta it said very little about the Iraq army.  It does contain some interesting scenarios, about half use US marines.  One of those is a flank attack of the town of Afak.  It uses 2 platoons and the marines are fighting irregulars.  I don't have 2 platoons ( too much for the solo player to keep track of and slows the game down) and I wanted to use the Iraq regulars that I purchased from Cold Warrior on TMP.  So... I decided to modify "Flank Attack" from Platoon Forward and start a marine platoon for Iraq.

For PF players I deleted the special "C" blinds from teh scenario ( you could leave them in I suppose) and your primary objective now is to move off the board in 8 turns.  I kept the off board MMG to represent the pinning forces and still rolled for US entry.  In addition, the stated scenario enemy forces represent the Iraqi regulars plus 2 vehicle "Cs" and I added one additional "A" blind that would be Fedayeen.  In addition, for the first 4 turns an "A" blind would enter and if real would be Fedayeen.   Finally, 1 "B" blind enters turn 1 and 1 "C" blind enters turn 2.  The "C" blind is a technical if an armored car otherwise it is an Iraqi whatever is rolled.

So back to the Platoon.   This is there second battle.  In the first they were moving through resistance to sequre a bridge in An Nasiriya.  They achieved the mission but the Iraqi forces delayed them enough that it counted as a loss.   The Mission for Lt DeClines was to flank the Iraqi position and drive through the town, reach the main road, turn left and continue on towards Baghdad.  His plan was to have 3rd squad pin the enemies front and advance with his other 2 squads rapidly through the town.  The Mosque was off limits unless sustained fire was received from it.
The US forces: 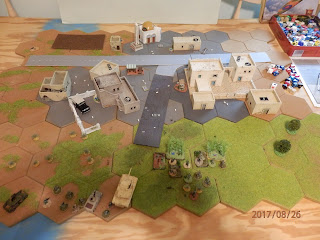 The outskirts of town.  Front line to the right.  1st squad to the right, Borden's squad to the left in reserve except for 1 fireteam that will advance to the wall.  Markers represent various potential enemy forces. 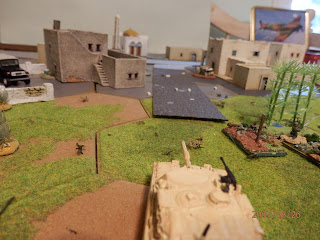 View down the street leading into town. 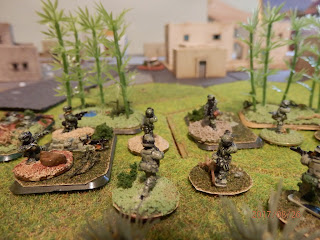 1st squad moving up into position behind some bamboo.  [ this is the bamboo I made up after my last vietnam battle.  pic is a little blurry but think it came out well.] 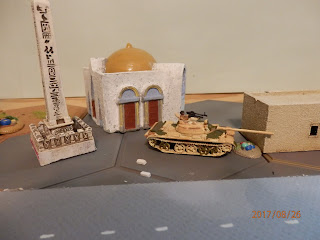 Roll for enemy forces and a tank emerges next to the mosque.  It is ready for the Yankees to come down the main road from 3rd platoon.  Our Abrams took it out with one shot. 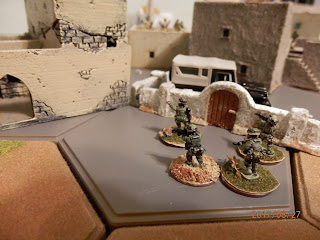 2nd squad's fireteam advances to the wall with little resistance.  The enemy must shift their forces to the new axis of attack.
Jack's squad runs into a squad of Iraqi infantry.  He sends Cpl Jones forward and they lose a man reaching one of the outbuildings.  It is clear there are alot of enemy in Jack's line of advance. 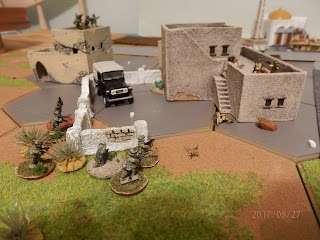 Lt Declines shifts his attack to Sgt Borden's squad.  They rush to the wall and prepare to assault the building.  [ fireteam in the background are actually in the building they are on top of.  Placed their for convenience.] 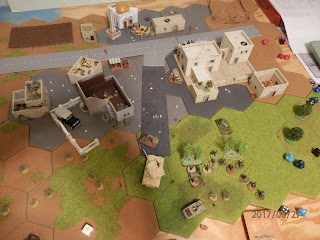 Overview of the battle:  2nd squad to the left.  2 fireteams and Sgt Borden have just entered the building.  MMG crossing road towards building.  1st squad in bamboo except for Cpl Jones in outbuilding in front. 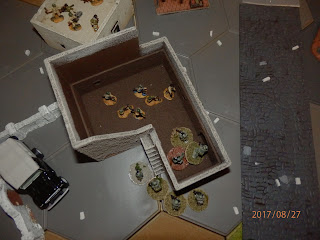 A fierce battle raged in the building as the Iraqi's had an officer who was a Gr I so knew what he was doing.  he was KIA and 2 Iraqis eventualled escaped.  Marines sustained 1 WIA. 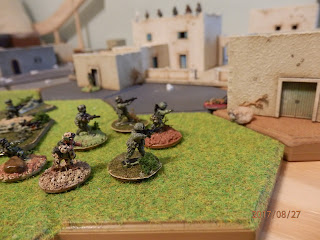 Seeing time slip away Sgt Jack charges the Iraqi position.  This was not a close run thing and 5 Iraqi KIAs with 2 POWs without loss for Jack. 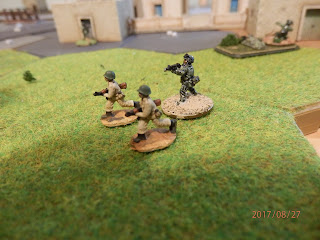 2 POWs escorted back.  They kept their firearms to protect them from the fedayeen! 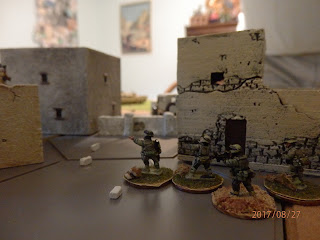 Fireteam of 2nd squad reconing towards the main road. 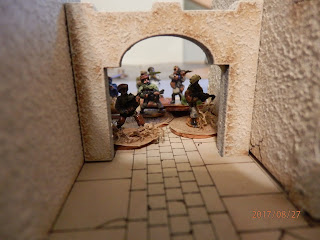 Some of the 2 squads of Fedayeen coming to the sounds of battle. 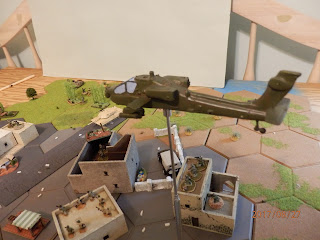 Lt DeClines brings in a marine cobra [looks like an apache] With no armor to fight he asks them to target the hotel and building next door.  [ FOF has no rules for inaccurate airstrikes except fog of war events.  Anyone have  good ones I can steal for modern helos?]  The rockets don't destroy the buildings but cause enough casualties to break the back of the irregulars.
After the air strike Sgt Jack tells his gyrines to saddle up. 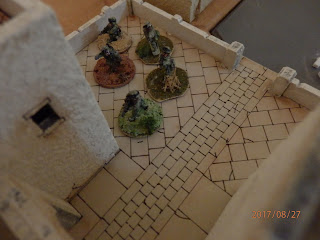 Through the hotel courtyard and into the hotel.  The Iraqi's fail their TQ roll so Jack's gamble pays off and he gets across the courtyard before the enemy knows what hit them.  The combat is short and violent.  6 Iraqi KIAs again with no US casualties.

With that the Iraqi forces withdraw before they are cut off by the rapidly advancing american forces.

Great game!   Post battle Jack's squad is very impressed with his leadership.  they advance to +2 loyalty so will follow him anywhere.  This translates to their morale going up 1 die to D12 for my FoF game.  In addition, his leadership fittingly increases to Gr II.  This is a positive leader for FoF and he will get a +1 for all his reaction rolls.  Finally, Lt Declines is impressed with Jack's clearing of heavy positions with the loss of only 1 man and puts him in for a decoration.  Capt Jackson is neutral to Sgt Jack so passes it through.  Because there was not much competition in the Iraq war I downgrade the starting medal by one in the Grunt's Forward tables. Jack had earned 10 valor points which normally would have qualified him for the Distinguished Service Cross. I downgraded this to a Silver Star.  I missed that roll but he had a 30% chance for a Bronze Star and our boy got it!  " for leadership and bravery in personally clearing an enemy complex of both Iraqi regular and irregular forces accounting for 11 enemy KIA confirmed, 2 POWs thus ensuring safe passage of the regiment towards Baghdad."    Also post battle one CPL became available to the platoon and Sgt Jack deferred allowing him to go to 3rd squad.  Thus PFC Betts still has 3rd fireteam.      Cool stuff.  I love the way this all breaths life into the squad.
for those of you that want to try this PF generated the following forces:
3 Iraqi squads with 1 Gr I leader and 1 Gr 0 leader.    1 MMG ( no team bonus ) 1 T-55.
Reinforcements were 2 Fedayenn squads ( 9 rifles and 1 RPG) and 1 T-55.

Sometimes the cards are stacked against you. Operation Torch.

Wanted to use my new desert mat that I bought at Historicon for my version of Bag the Hun.  Decided I would paint up some P-39s for the occasion.  I have some in russian colors but none for the USA.  Figured I could use them in the desert, New Guinea and Guadalcanal.  So painted them up in a camo scheme that was used on the 'canal and in Tunisia and rolled up the 91st Fighter Squadron using Squadron Forward.   This is obviously a new squadron put ashore 10 days after the invasion.  Historicaly they flew many cap missions until it became apparrent the P-39 was outclassed as a fighter.  I will keep them in 1942-43 and see how they do.   They have 1 vet ( Capt Filarto ) 3 average ( one with a drinking problem) and 4 green pilots.  You could already say the cards are stacked against them but they don't know it yet!
Capt Filarto needed to pick who would accompany him on the squadron's first mission in Tunisia.  After several orientation flights they were now going on a combat patrol just east of the beaches looking for trouble.  He wanted the other element lead to be sharp and figured he could take 2 of the less experienced pilots as wingmen because everyone had to learn quick now that they were here.  He decided on 2LT Mike Myers as the element lead.  Mike was a natural born pilot ( flying demon skill) but he had a bit of an attitude.  He was up from the enlisted ranks so was older than everyone but Filarto and seemed to blow hot then cold towards his squadronmates.  Still he could fly.  As his own wingman he chose 2Lt Andrew Sampson.  Andrew was a quiet clean cut kid trying to do the right thing.  Steve felt he would be steady once the shooting started.  He chose 2Lt Jacob Hamm as Mike's wingman.  If Mike had a friend in the squadron it was Jacob.
Gold Flight
Lead Capt Filarto   lazy/position       Veteran
2LT Andrew Sampson  Cultured/ family Green
2nd element
2LT Mike Myers   Fickle/ position      Average        Flying demon     mustang
2LT Jacob Hamm   Cultured/ family   Green

Traffic control broke into the net, "Gold team leader, bandits inbound to beach.  Change to course 206 20 angles to intercept."  This is it! thought Steve. 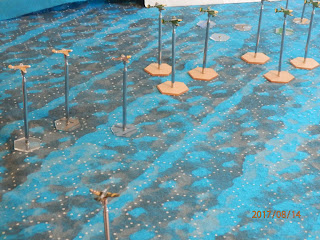 As the dots on the horizon grew into aircraft Steve was not pleased.  9 Stukas guarded by 5 ME-109Fs.  They were certainly outnumbered!
He would take the fighters and told Mike to go down and break up the stukas. 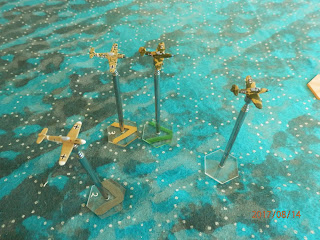 As Mike and Jacob concentrated on the Stukas 2 ME 109s came up from behind.  Mike used his skill to evade but Jacob ( green stand green pilot) wasn't so lucky.  Bullets tore up his wings.  Mike told him to break right and then executed a thatch weave that worked!  Jacobs tail was clear but his plane was sluggish now.  ( that is saying somehting for a P-39 at 20K ft). 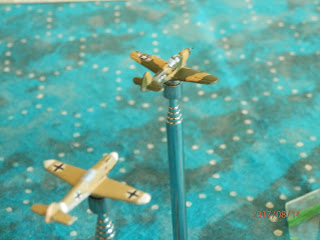 As Mike congratulated himself on clearing Jacob a hun came up a blasted his engine.  Mike managed to get out and was picked up by a destroyer later. 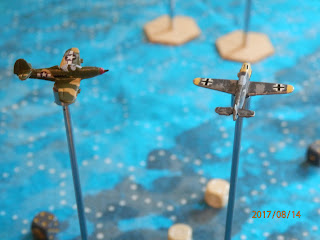 Meanwhile Capt Filarto tangled with a ME 109 that seemed to dance in the sky. ( Jr ace pilot).  He was so busy keeping his own tail clear he couldn't help the other element.  ( pictured is Steve's one shot he got.  minimal damage!)

At this point there were 2 P-39s against 4 ME 109Fs. ( Jacob managed to get off the table and Mike had damaged Jacob's assailant enough that he left as well.)  Capt Filarto positioned himself for a diving pass at the stukas with a continuation away from the battle.  He picked one and told Andrew to do the same... 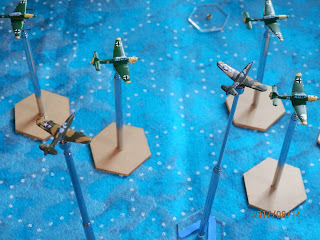 Steve and Andrew get ready to make a diving pass before they too hit the silk.

Steve concentrated on aiming for the center of the plane and... 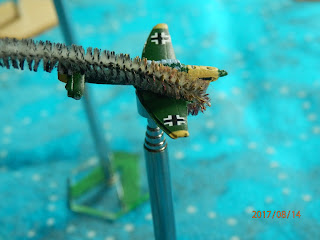 Was rewarded with a trail of black smoke that emanated from the stricken dive bomber.  Andrew also scored and bother were confirmed by a thankful navy.
The only drama to play out now was 2LT Hamm's landing at the dirt airstrip.  The airacobra is not particularly difficult to land ( unlike the ME 109) but Hamm was green (-1) and the aircraft was damaged (-1).  Unfortunately, Hamm skidded left and cartwheeled the plane.  It is a write off but he was only wounded.

Post game the squadron celebrated their first two kills.  Capt Filarto told off Lt Gordon's the intel officer so that relationship is a -1 right now.  Even though 6 stuka's got through and both sides lost two ships the squadron didn't lose a man and, as the Group commander said, "4 airacobras against 5 veteran messerschidts? I'd say you started out with the cards stacked against you."

for those of you that want to try your luck Squadron forward generated 1 ace, 2 veteran, 1 average and 1 green pilots for the germans.