Jack was one bullet away

Greetings.  It has been awhile.  I have not been motivated to play many games since my dad died.  As I stated previously I hadn't realized how much of my gaming was tied to sharing with him; either at the table or talking about it after the fact.  I haven't really painted very much either as there is no one to show the figures to after I am done.  [ Have painted 1 trawler and 5 numidians in the last 2 months.]

Good news is I have finished Flotilla Forward.  I have been seeking help with formatting and think I have found someone.  While I am at it thanks to all who have purchased my rules over the last year.  I was able to donate $1,000 to the local food bank on your behalf.  100% of sales goes to the county foodbank.  Hopefully you will see Flotilla Forward by Christmas.

I have been reading a great book, One bullet away by  Nathaniel Fick.  I was briefly a platoon leader for an army combat MP platoon in Berlin and have commanded at squadron and group level in the Air Force.  Mr Fick, an ivy school graduate, explains his OCS transition into a Marine Corps officer brilliantly.  He describes the pressure and uncertainty of being a platoon leader well and he ends up in combat in Afghanistan and Iraq. 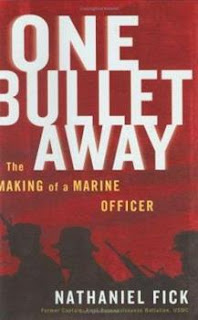 Inspired by the above book I decided to take my marine squad in Iraq on another mission.  You may remember this squad is led by Just Jack a brilliant squad leader who has already been put in for the bronze star for an attack on Afak on the second day of the war.  The squads morale is elite (12) when is in in charge. The platoon is commanded by Lt DeClines who graduated West Point and service transferred into the marines to be one of the toughest. Well the platoon sgt was wounded and evac ed out so Jack was the natural choice to step up into the job.   The title of Mr Fick's book comes from what all marine leaders are taught, "Your subordinate is just one bullet away from taking your job; train them well."  So Jack is the new platoon sgt.

DeClines walks back to the platoon leadership from Capt Jackson.  "Recon just went through the town ahead and took fire after crossing the bridge.  We are to conduct a hasty attack and clear the road so the rest of the battalion can proceed.  We will have air assets.    We will have artillery only if necessary as we are to stick to the ROE and limit civilian casualties.  [ I rolled up "Hasty attack for the mission and also artillery.  I figured marines wouldn't go in there without air during the day.] 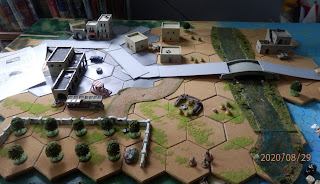 Lt DeClines plan was to have 3rd squad flank from the left and 1st squad come over the bridge.  He would be on the near side of the river [ right] with the radios, HMG and 2nd squad in reserve.  Jack would go with his old 1st squad both he and DeClines weren't sure Cpl Jones was up to the task of leading it.

Squad morale back to avg [10] with Jones in charge. 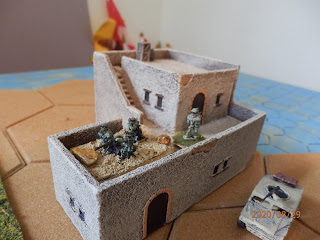 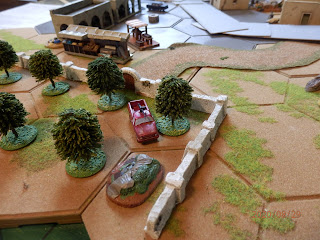 3rd squad runs into something unexpected immediately.   The weapons cache in the foreground is just a ;hot spot" marker used in FOF to mark reinforcement entry. 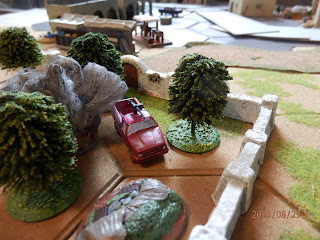 A cobra helo is vectored in. 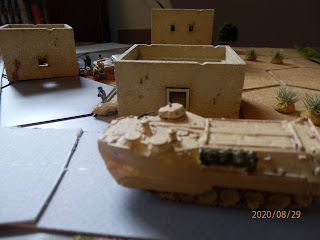 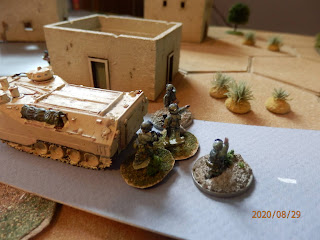 and offloads into a hail of RPGs and small arms.  Cpl Jones and Koke initiate a close assault on the building while Jack is still in the track... 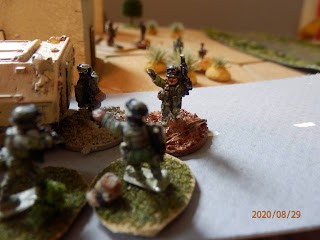 the attack fails as marines mill about behind the track.  The enemy start to encircle from the right as well.   Jack had wanted to let Cpl Jones lead the squad but things are moving the wrong way.  As the track blows up he takes control and orders a retreat. 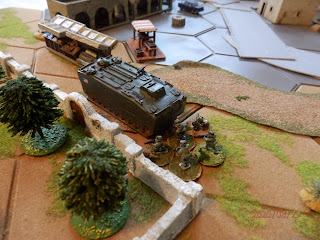 Meanwhile 3rd squad offloads at the orchard and prepares to advance on the market... 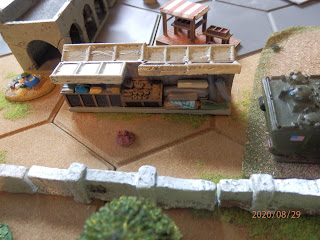 A cool random event occurs.  One of the marines thinks he sees a booby trap ahead.  Sgt Lee decides to stay clear of the area.  He will send 2 fire teams through the orchard to flank the market. 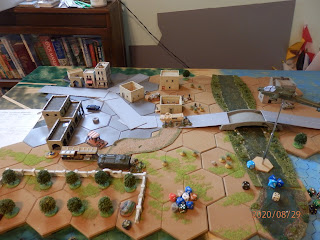 For situational awareness   1st squad middle of board just before track blows up and Jack leads them back to the scrub.  Sgt Lee offloads next to the orchard.    Cobra [ yes Jack that is a Cobra] in support about to blow up a MG position across the board.  The Iraqi MG position has managed to suppress the US HMG allowing the Iraq infantry to move up and threaten 1st squad. 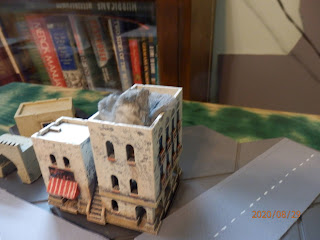 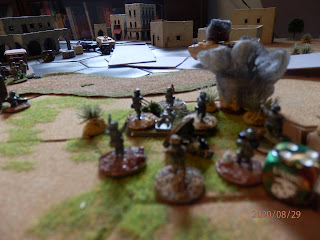 As Jack is trying to rally 1st squad mortars start to drop and an armored car shows up.  Not good. 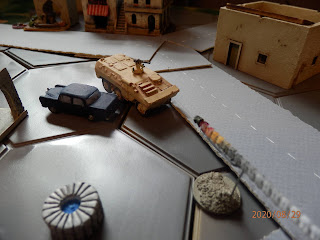 The SMAW attached to Jack takes care of the armored car and DeClines HMG causes the mortar men to flee. 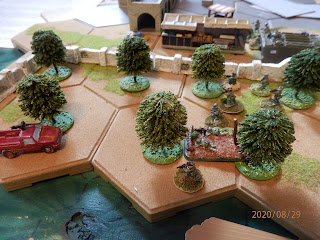 3rd squad finds the technical that hid from the Cobra and a brief firefight occurs. 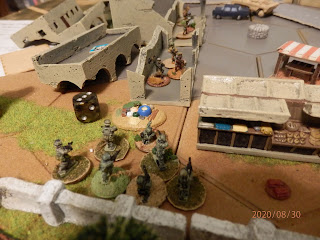 After that Sgt Lee leads an assault on the market.  Another random event gave it's defenders a morale boost so they plan to defend to their last breath... 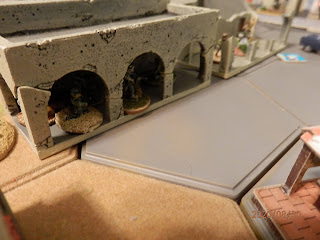 which they do.  3rd squad continues to clear out the market. 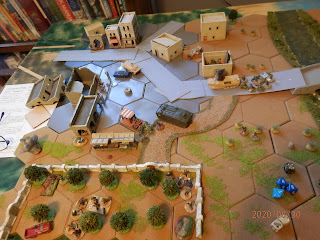 Meanwhile, back at the scrub, Jack has sent Cpl Jones and 1st squad back to clear the original building after it has been mortared. He then goes to check on the progress of 3rd squad.  The Iraqis have managed to slip in fighters behind the marines into the orchard.  Please note the FT left in the orchard to cover 3rd squads assault.  They are suddenly badly outnumbered in the orchard.  As Jack hears firering in the orchard he starts to realize these 3 marines are in peril... 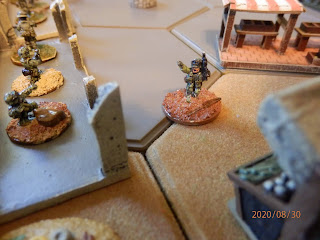 Jack sprints across the plaza telling Sgt Lee he needs a fireteam to follow him NOW! 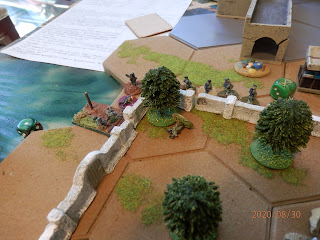 By the time Jack arrives with a fireteam the support fireteam is broken outside the wall with 1 marine lying in the orchard.   The marine firepower is enough to push the Iraqis back.  They leave as silently as they arrived.

Great battle that was played over several days.   FOF really models asymmetrical engagements well and the Iraqis used hot spots to shift forces into the orchard and almost overwhelmed a fireteam.  1st squad performed even worse than I thought without Jack necessitating some hard decision post battle.

Post battle it was clear that Cpl Jones couldn't lead 1st squad.  There were even doubts if he could lead the FT. 2nd FT's morale drops to 8.   Sgt Alcantera will be brought in from the company to lead as Cpl Betts is too junior.  Squad morale stays at 10.  Capt Jackson is moved up to battalion to fill a vacancy so Lt DeClines becomes acting company commander.  [ post game event was Lt DeClines is transferred so that is how I handled that action.]  So guess who is acting platoon leader...?  Yep Jack is one bullet away.