Had a desire to start a West German army in a cold War gone hot situation.  I already had 3 vehicles I bought from Jammer man a while back so I quickly painted up 6 infantry and was ready to go.  I rolled up a squad for Platoon Forward with Gruppenfuehrer Lachman.  I could only take a squad on the first mission and I rolled up "Defend against raid."  Did not sound like a great start to the third world war so I substituted "Meeting engagement".  So, how to have a mission involving 3 vehicles and 6 troops?  Read on dear guest!
Sgt Lachman     son of a dockworker      Careful/ engeneering       Gr I leader
Squad is 8/8
The following is excerpted from  Wrong Place; Wrong Time.  My view of WW III by Johan Lachman.  Published by Tasche books, Koln Germany, 1987.  It is a great read of the recent war and has a number of scenario ideas.  This is taken from the third chapter where he describes his first contact with the russians.

Funny thing, after all of our drills on how we would face the enemy my first contact was nothing at all like the brass had planned.  But that was the way the war was I guess. Ivan apparently did not do exactly what he was suppose to because on the first morning a platoon of Jaguars had to move to a different hill and they wanted some infantry for close support. I was tasked to take my squad to the hill ( 346.3) and provide the close support.  I was to escort a Jaguar who had broken down during the move but was now anxious to join his platoon. Truth be told I was somewhat proud the Lt had trusted me with this solo mission.  Shortly after starting out we came across a Leopard who was going our way and joined him.  Having a tank in front of you never hurt! 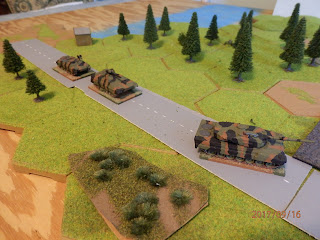 Our little convoy ( Wish I had german decals!)


We were about to make a left onto B45 when the Leopard accelerates and fires two shots down the road.  So here I am with my squad and two fellows I have known for about 20 minutes.  Welcome to the war! 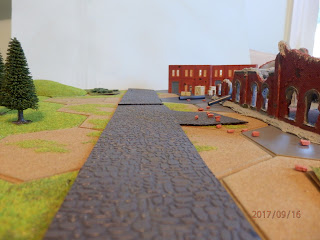 View down B 45 two days after the battle 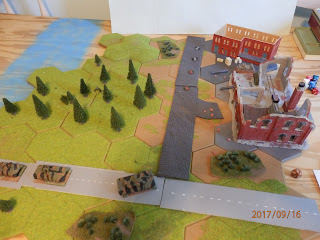 Reconstruction of the moment of contact.  Markers along B 45 represent blinds.  The corner was later called "Tornado corner" for 2 reasons.  First, a German tornado fighter crashed into the factory earlier that morning and second to commemorate this battle. 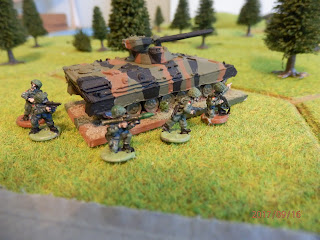 Since I had no idea what was going on I dismounted my squad and moved into the woods to look up the road.  ( That is me pointing)

To my right came a tremendous explosion 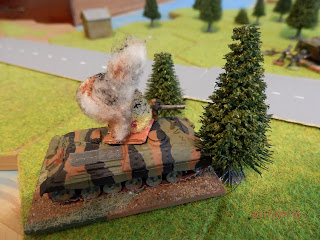 One Jaguar is not joining the platoon

As I made my way through the woods I saw the source of our problems. 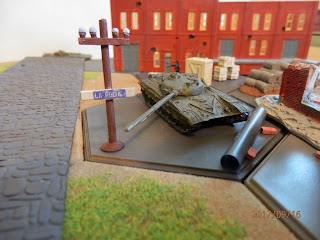 I heard other vehicles moving but didn't know if they were tanks or BMPs. 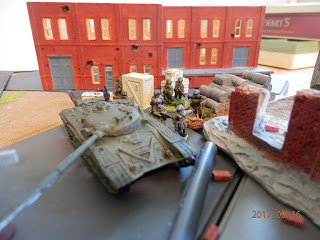 I guess they were BMPs!  ( I'll admit I was jealous of those cool fur hats.)
Before I could give the order to fire the russian tank roared and all hell broke loose in the forest. 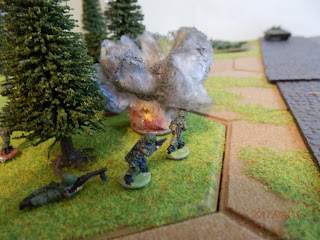 Dietz died instantly and Kruger was hurt bad.  I was frustrated.  How do you fight a tank?  Why wouldn't the Leopard do something?
I dispatched Toll to move Kruger back to the track and we started to lay fire on the infantry.  The Leopard did wake up and take out the tank.  I also ordered my milan to set up to cover the road.  We traded shots with the infantry in the tornado factory when Ivan also appeared to our front! 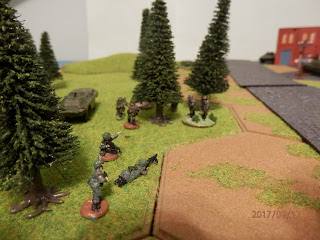 The panzerfaust took out the BDRM and we pushed Ivan back.
At this point I was down to 4 effective s facing at least 2 squad of russian infantry with a german tank that was not much help.  I pulled back to the track and rolled back down the road.  What had I accomplished for the cost of Dietz and possibly Kruger?  I did not know.  I radioed the Lt and he said to join the platoon at a small village nearby.

Fun battle that put my germans on the table!  While the germans withdrew I consider it a small win as Lachman was outnumbered.
For those of you that want to try this the first "C" blind that is real will be a tank.  Each "A" blind that is a squad comes with a BMP.  Platoon Forward generated this for the Soviets:
8/8
1 T-72, 1 BDRM and 2 squads with 1 officer and 2 NCOs all Gr I plus 2 BMP-1s.

Been busy potentially changing the way I do my  tactical combat.  I have longed used Combat Patrol for activation which I think is a brilliant system ( particularly with my house rules).  I have used the CP cards to determine infantry hits and used FoF for pretty much everything else.  I have noticed that the games do drag a bit if I have more than 2 squads per side on the table.  I was trying to figure out how to "speed things up" without losing my emphasis on command. ( Something which FoF lacks.)  Am working on it and think I am on to something.  Am using FoF initative ( similar to CP's interruption) but making the grades of your leaders mean something.   Will let you all know when I have it figured out.  So been "playtesting" with my armies army russians and QRF vehicles. 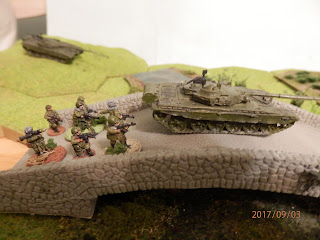 Russians advancing with a T-72 in the background on overwatch. ( Tanks on overwatch can only fire once.) 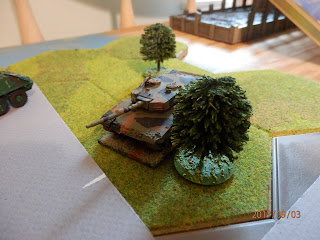 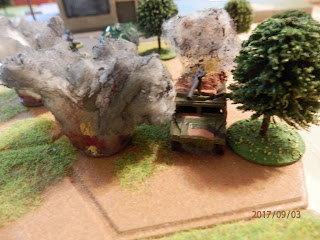 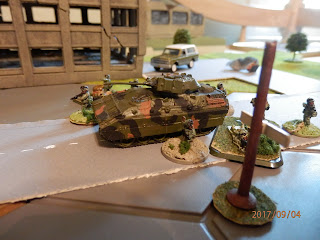 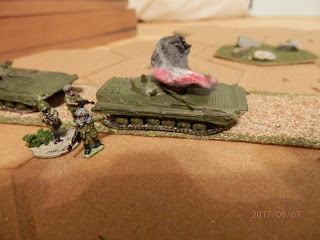 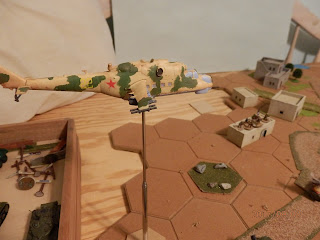 My newly minted Hind prepares to take out some rebels! 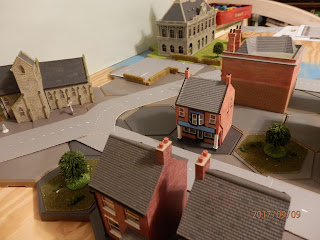 A town in Estonia 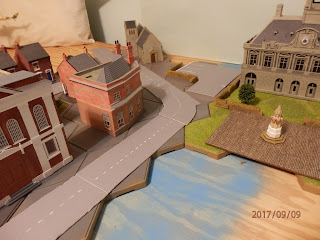 Another view  ( Need to get some more grey boards!) 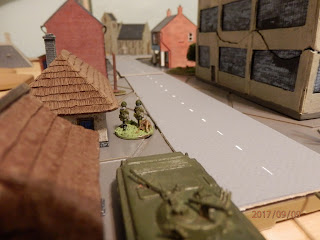 Russians advance up a street Heavy artillery takes out a house!  ( Working on scatter rules for artillery and airstrikes.) 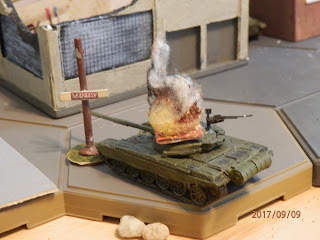 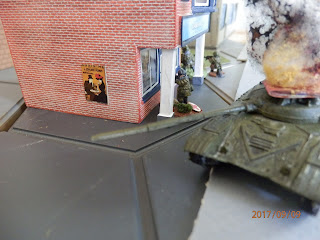