Not getting a lot of wargaming in lately.  Two game of SAGA and several of Deadball but finally playtested a scenario for the war of 1812.  In the great lakes supplies were often transported by small boat flotillas not unlike "the slot" 130 years later.  They would sometimes be escorted by larger ships.  Of course it was hard to close with these convoys when you were in a sailing ship and not a PT boat...

Lt Mapes was so excited that he almost ran back to the USS Fair American.  Finally an important mission where he, scratch that, his ship was the star!  He called out to Mr Beckam that he had news of an important nature.   Spies had heard of a convoy going to the Niagara isthmus in 3 days time with supplies for the British army.  The Fair American and the USS Oneida were going to intercept.  They would fly British colors to get close enough to fire at the boats.  Because of their long 32 and 24 the Fair American had not only been chosen but would lead the Oneida into the fray.  Finally a good reason to be stuck as a captain of a converted merchant ship!

March 1813 on Lake Ontario.    Winds moderate straight off the shore 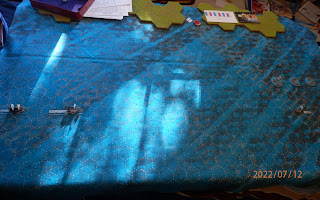 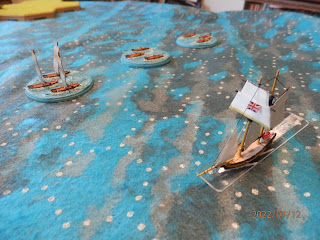 At 2000 yrds HMS Beresford signals "What ship?" asking for the identity of the incoming schooner.  Lt Mapes signals "repeat" or at least what the americans think is "repeat" as they continue to close the distance.  Unfortunately... 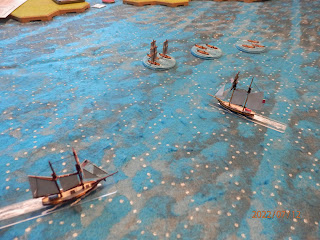 it doesn't appear to fool anyone.  The boats and the British schooner all turns towards shore.  Lt Mapes orders the US colors hoisted aloft. 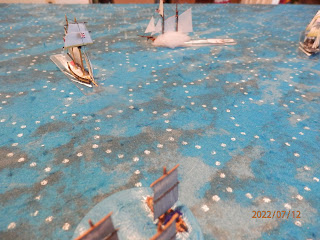 The USS Fair American opens fire on the boats at 300 yards.  "Excellent shooting Todd!" exclaims Lt Mapes as one boat disappears with a direct hit! 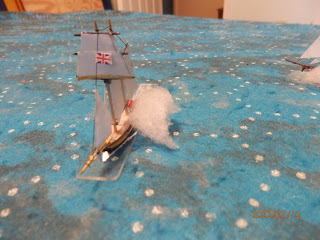 The British schooner fires on Lt Mapes.  It rattles the rickety hull and causes several casualties among the crew. 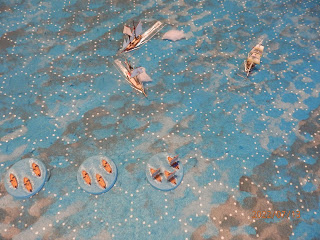 Overview of the battle.   The 2 US ships closing range towards the boats.  The Oneida armed with Carronades needs to be very close to hit anything. 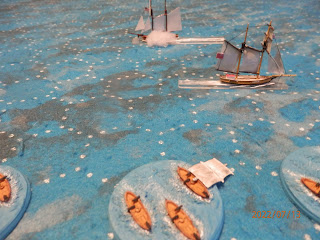 As the british boats sail towards shore the USS Fair American fires again.  This time they dismast one of the boats.  The british schooner moves towards the Oneida. 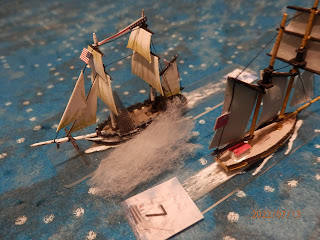 The HMS Beresford and the USS Oneida trade broadsides.  Both ships are marginally damaged. 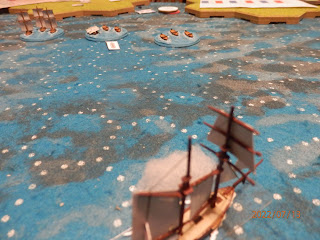 Lt Mapes dares not to get too close to shore.  He orders one last volley against the fleeing boats. He dismasts another boat. 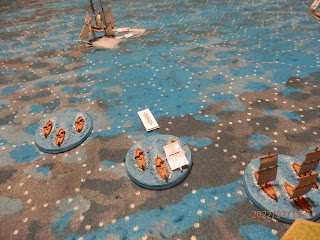 The USS Oneida fires one last shot as well.  At this range she misses.

With the HMS Beresford heading to open water the americans realize their chance has ended.  1 boat sunk and 2 damaged.  Not brilliant by any stretch but not terrible.  The US casualties are very light.  The USS Fair American has played her part and not been found wanting.  "Mr Beckam, let's take her home."

Fun, quick game.  Will need to work on the parameters and then hope to post this. 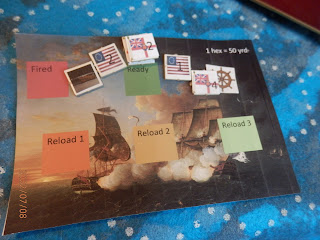 For those of you that play Post Captain I created this to keep track of reloading times.  I hate writing stuff down.

For those of you on the Post Captain forums, here is the USS Hancock card I created.  This is one of the original US Navy frigates of the revolutionary war.