Have been busy with a couple of different things as of late.  Grunt's Forward has been moved back to after Salute.  Played a couple of AoS games with "Blood, Bilge and Iron Balls" that I picked up at a used book store.  Bought an outstanding formula 1 racing game called "Race.  Formula 90" and painted up some more 1/600 ships.
"Blood Bilge and Iron Balls" ios a nice simple system that focuses on repairing your ship and damage to command.  I like the system but still has too much book keeping for me.  I need to come up with "Releases the Hounds" for AoS at some point.  The tricky part is the french shooting at sails; how do you model that easily?
I have been interested in the strategy of Formula 1 racing since my parents got me "Speed Circuit" as an early teen.  (This was when the 3m version was new!)  It was a little fitly and difficult to play solitaire.  Still I had several racing seasons taking BMW all the way to second place!   I read very favorable reviews about "Race Formula 90" and took the plunge.  What a great game!  Just as much strategy without as much fittle and easy to play solitaire.  Unfortunately BMW is out of formula 1 so I will either have to go retro or switch to Ferrari.  Now I just need to find some 1/200 cars that I can afford!
Finally I had a Hunt DE and 3 E-boats painted up so had to enter the Narrow Sea! 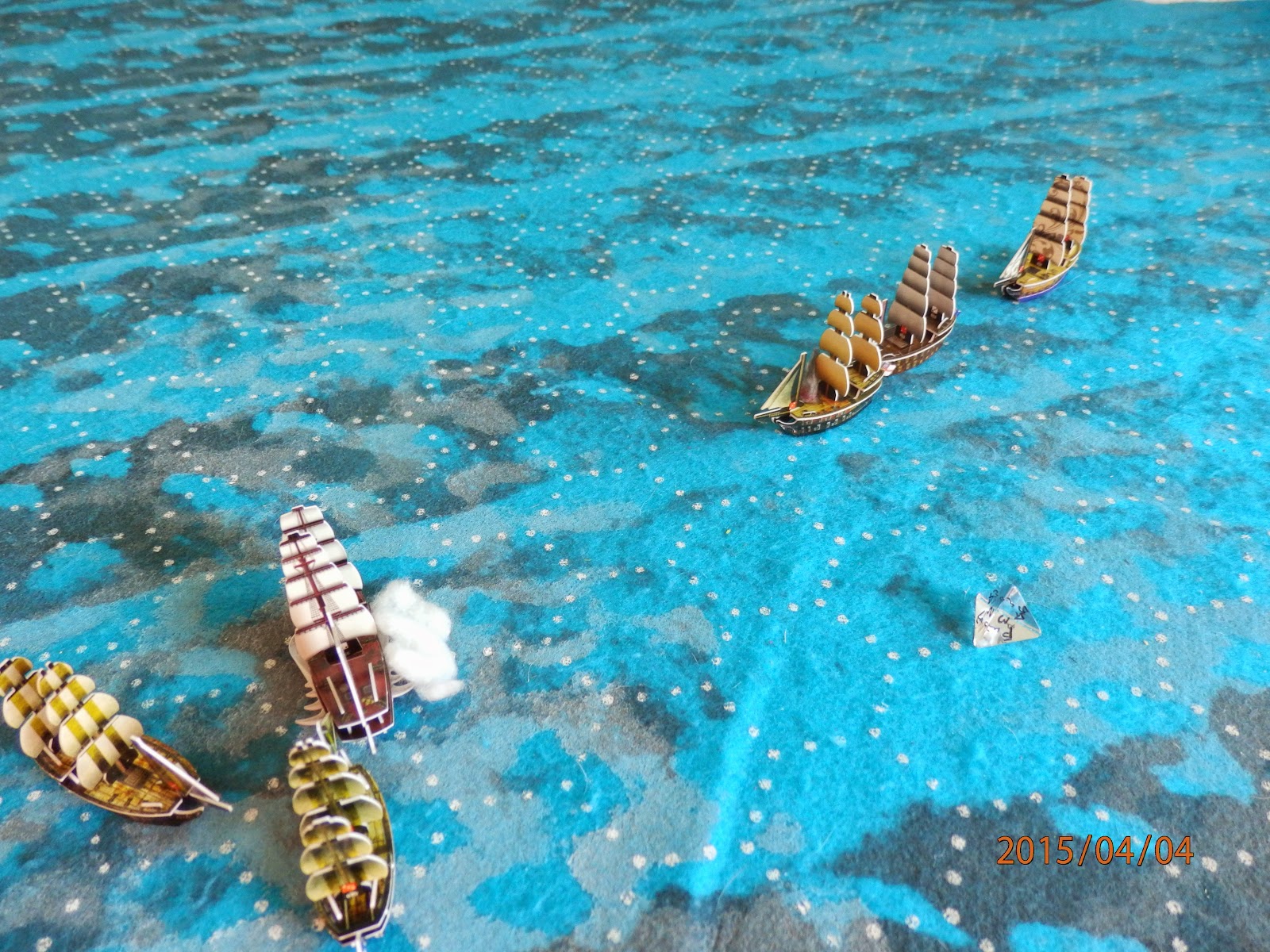 French and English 74s battle it out with BBB! 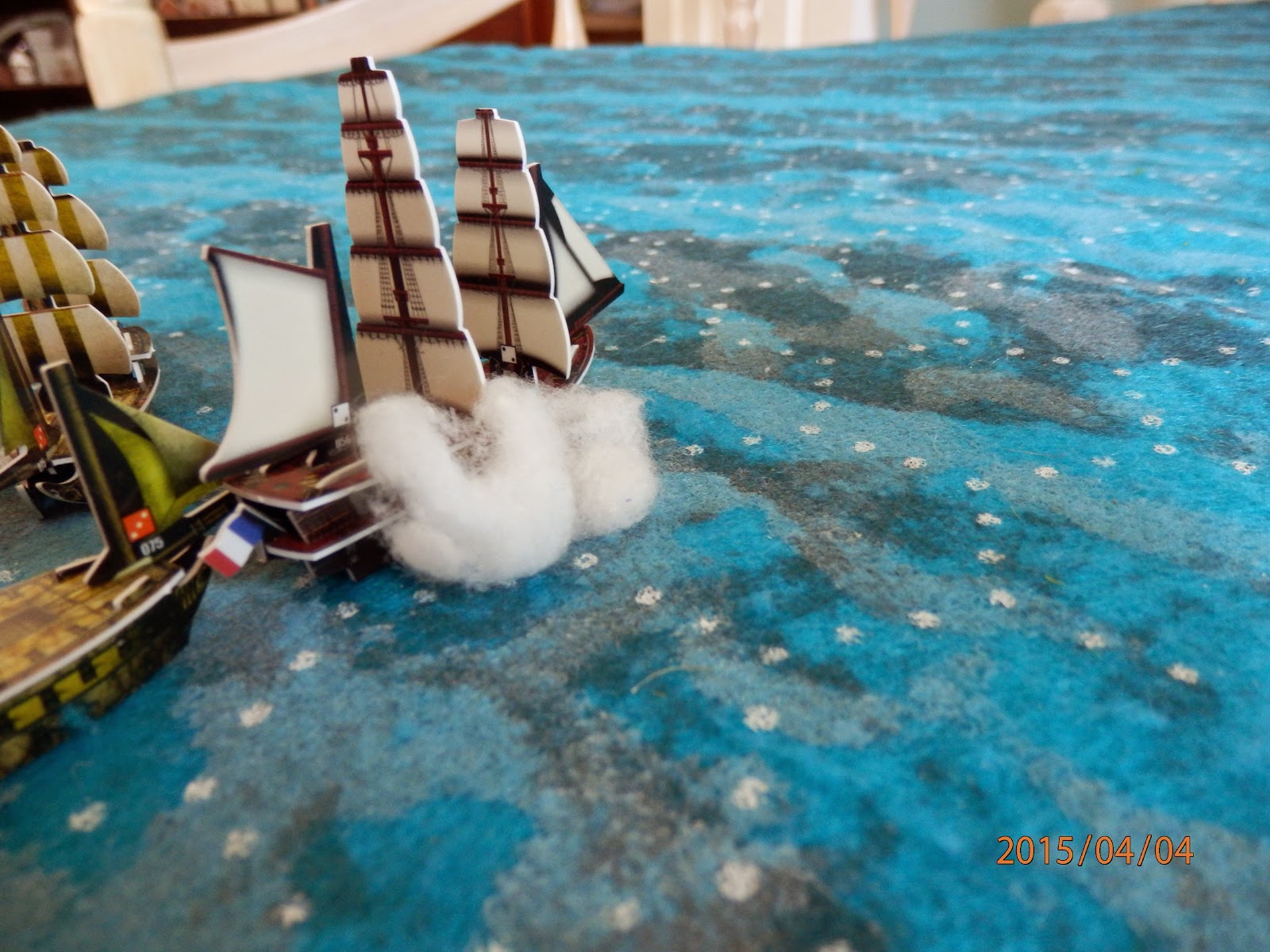 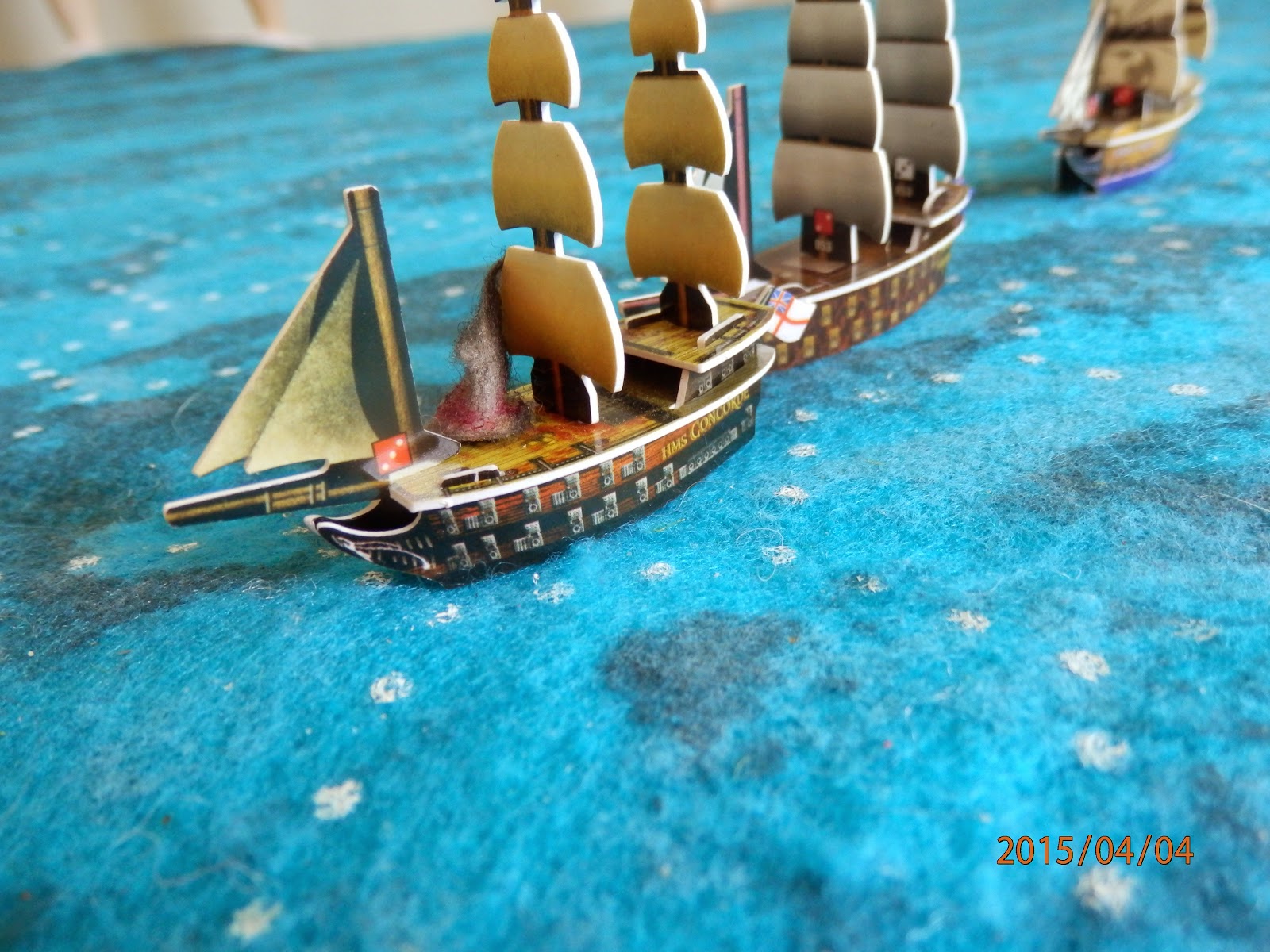 Fire on the HMS Orion.

OK, back to the narrow sea.     Cmdr Lightfoot aboard the HMS Cleveland (Hunt DE) was glad the clouds were breaking this night.  It would be easier to see E-Boats and Jerry rarely bombed at night.  Visibility must be 2 miles at least.  No e-boats would chance an encounter with the small ships he was escorting.  Besides himself he had a minesweeper (HMS Rye) with a 3 inch gun and two Fairmile Bs also with 3 inch guns. 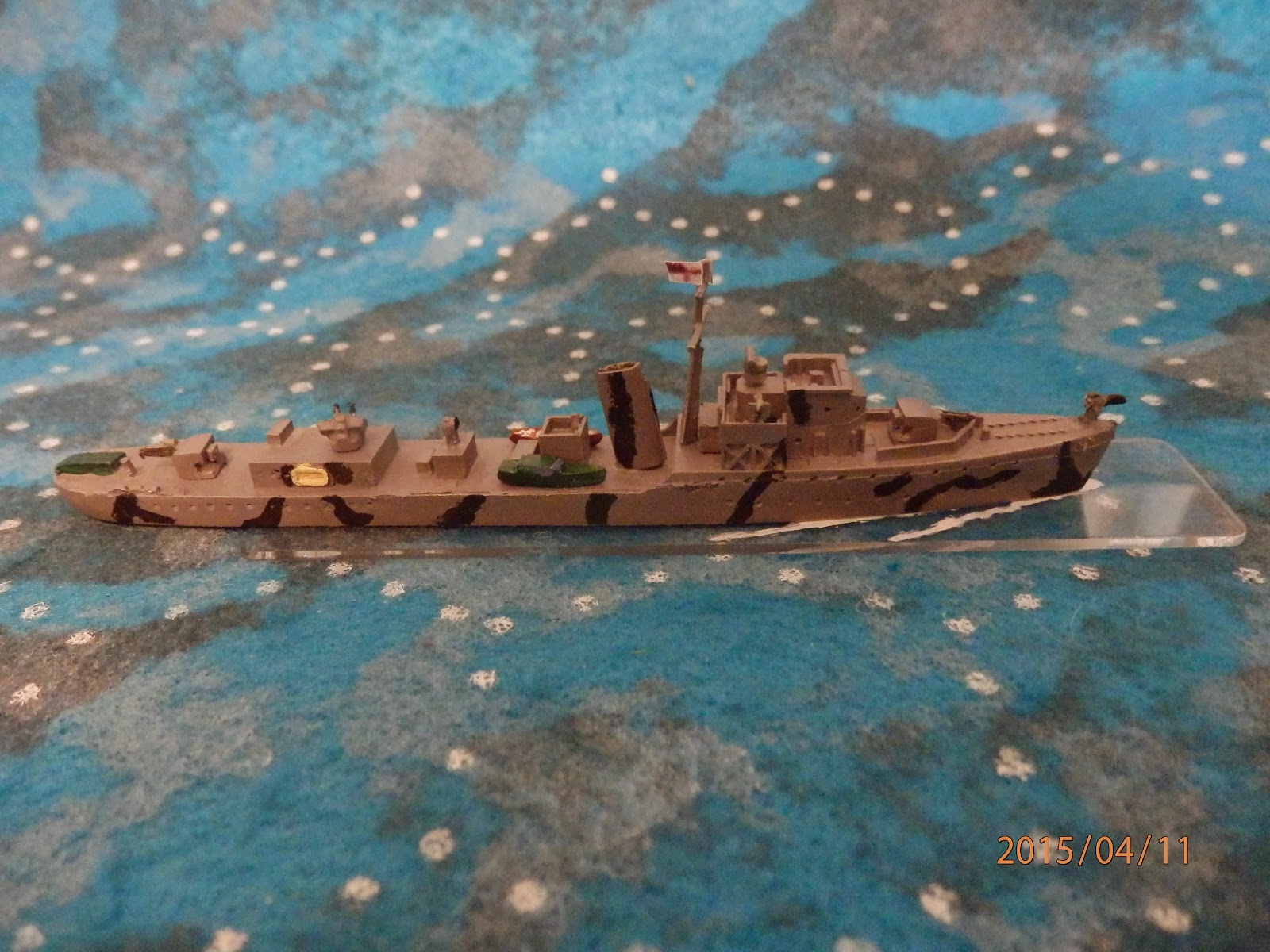 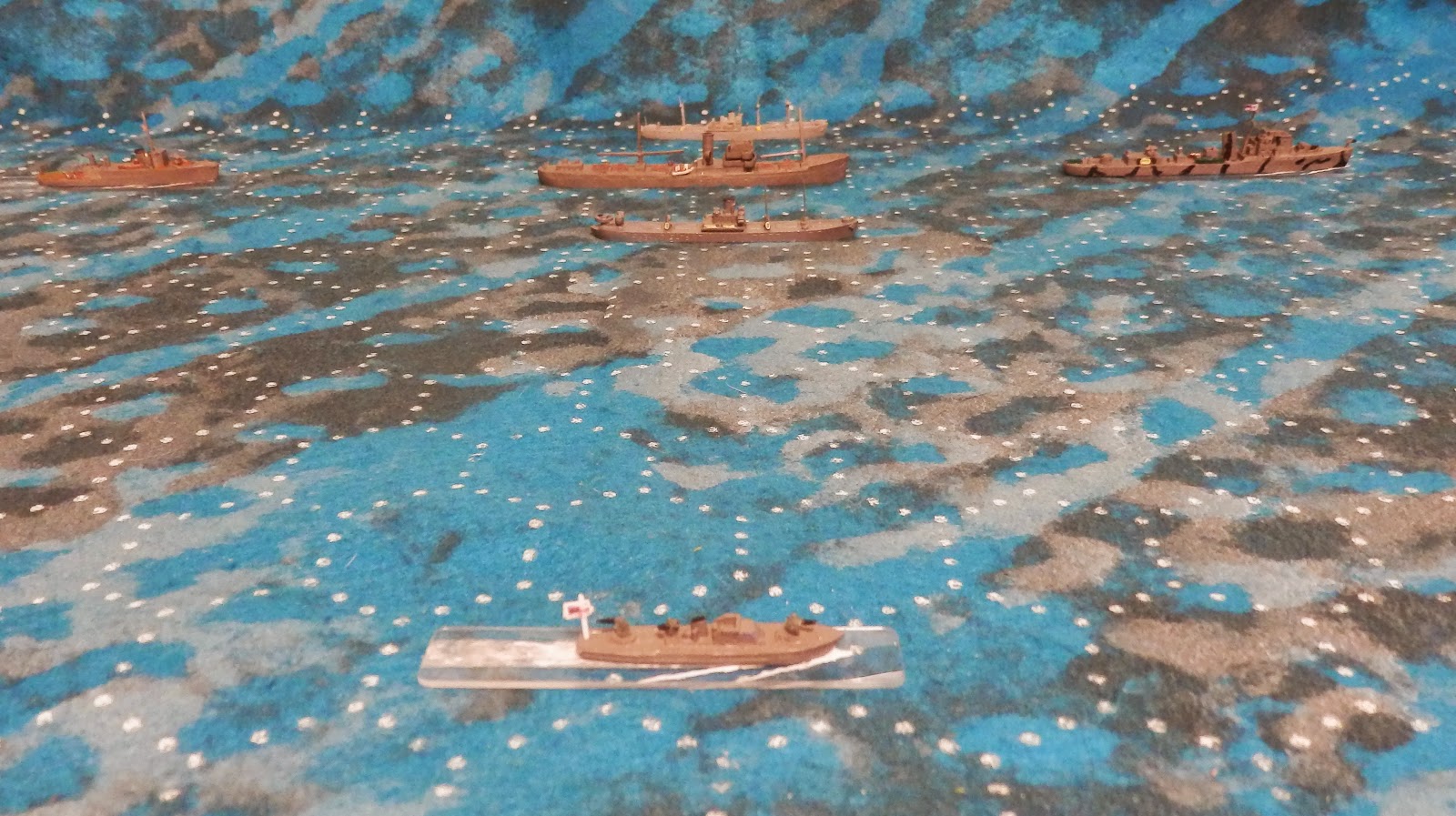 Convoy steaming through the narrow seas.  Due to visibility each hex is 200 yards rather than 100. 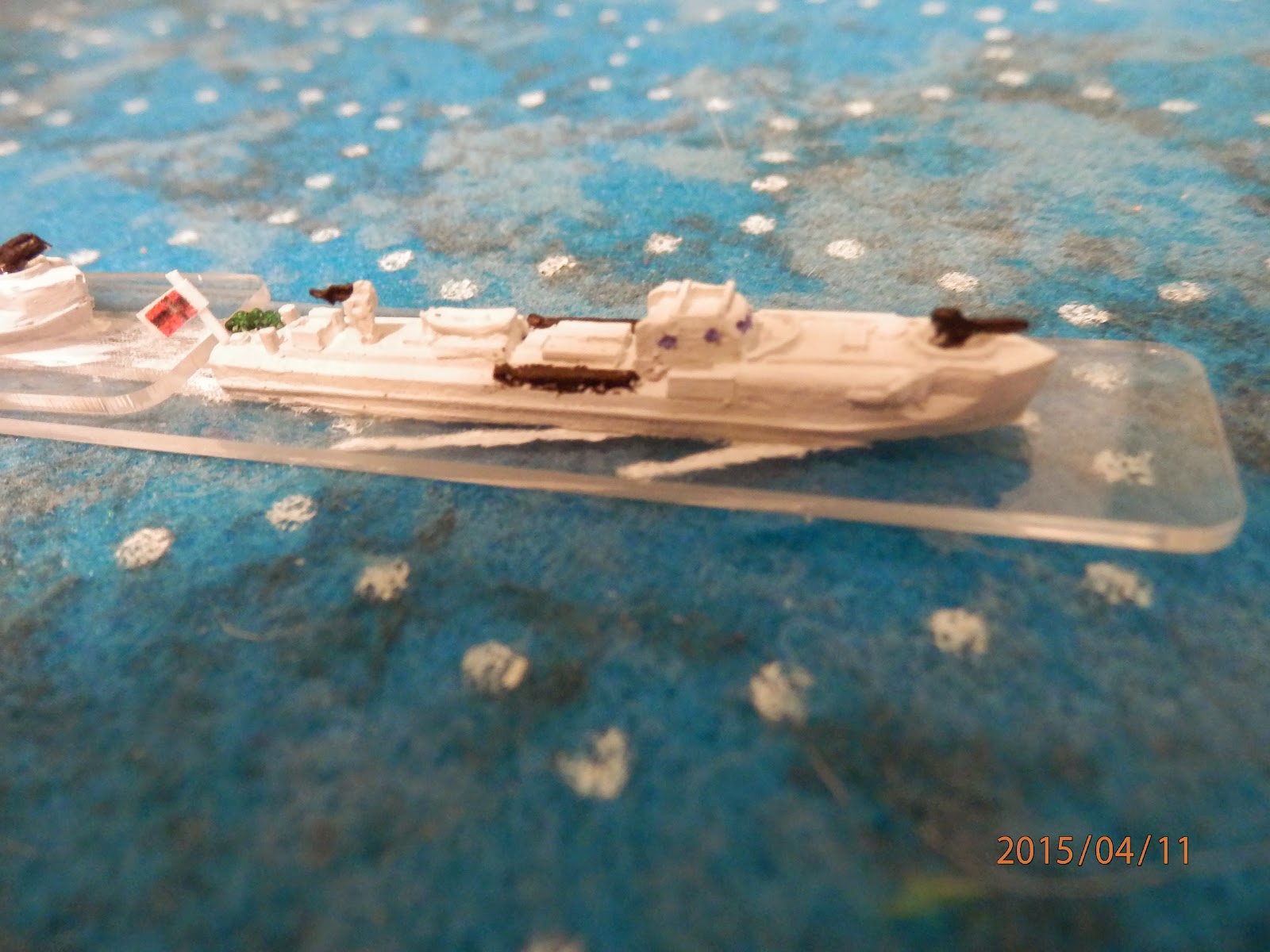 E-Boats in line ahead cursing the improving weather.

Cmdr Lightfoot's thoughts were broken by a shout of a starshell to starboard.  Sharp eyed crewmen on the HMS Rye had tracked and illuminated 3 E-boats trying to move into the convoy at just 2 miles.  Without orders the three supple ships turned to port.  The Fairmile on the starbord side engaged while making smoke, HMS Rye and the HMS Cleveland made a starboard turn to engage. 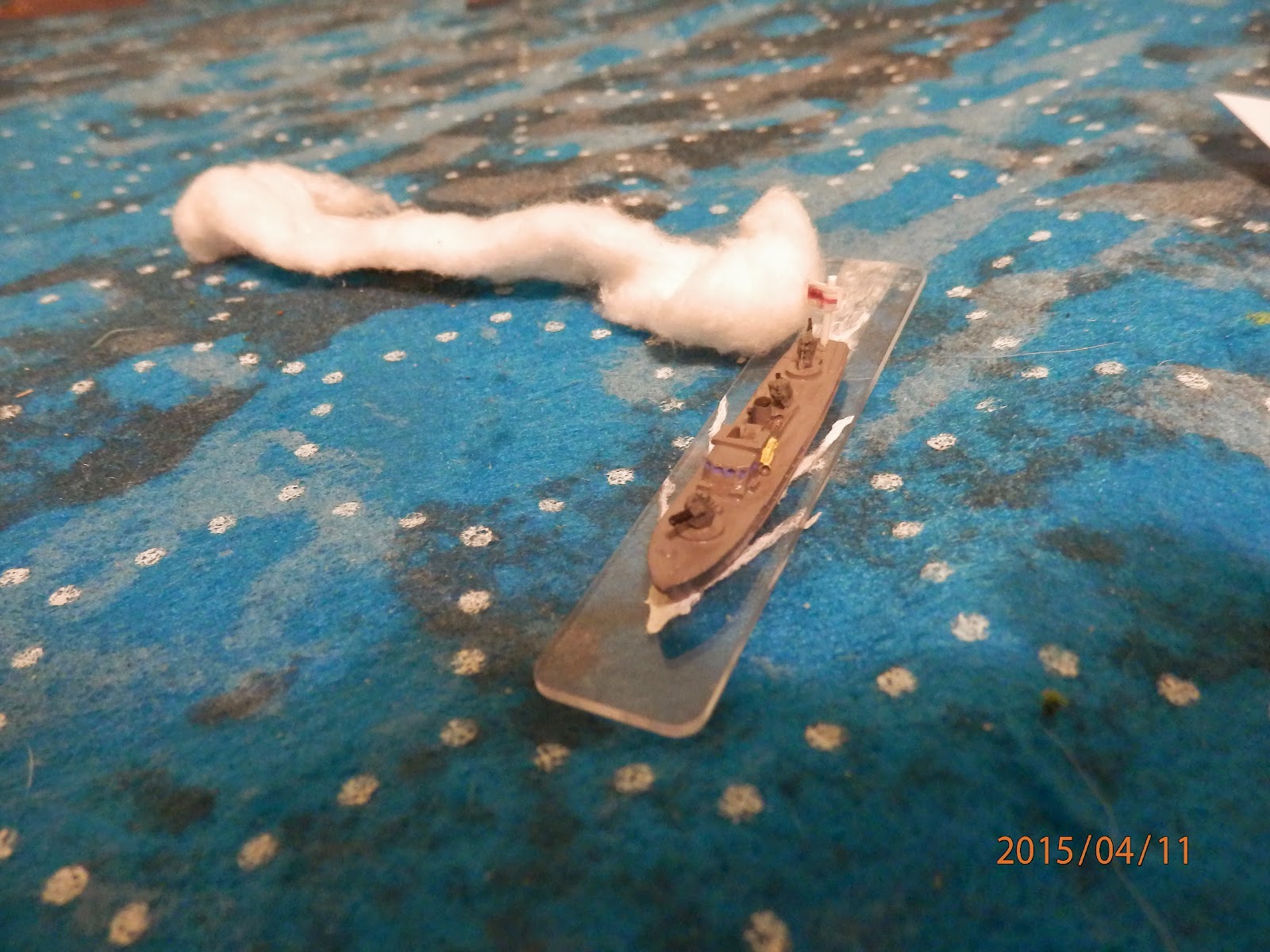 The British 3 inch guns outranged the Germans and hit e-boats number one and two.  E boat #1 was heavily damaged and launched torpedoes at the HMS Rye at a mile that missed.  She broke off.  E-boat #2 dueled the Fairmile.  The Fairmile lost her aft 20 mm while E-boat #2 was put on fire with heavy casualties. 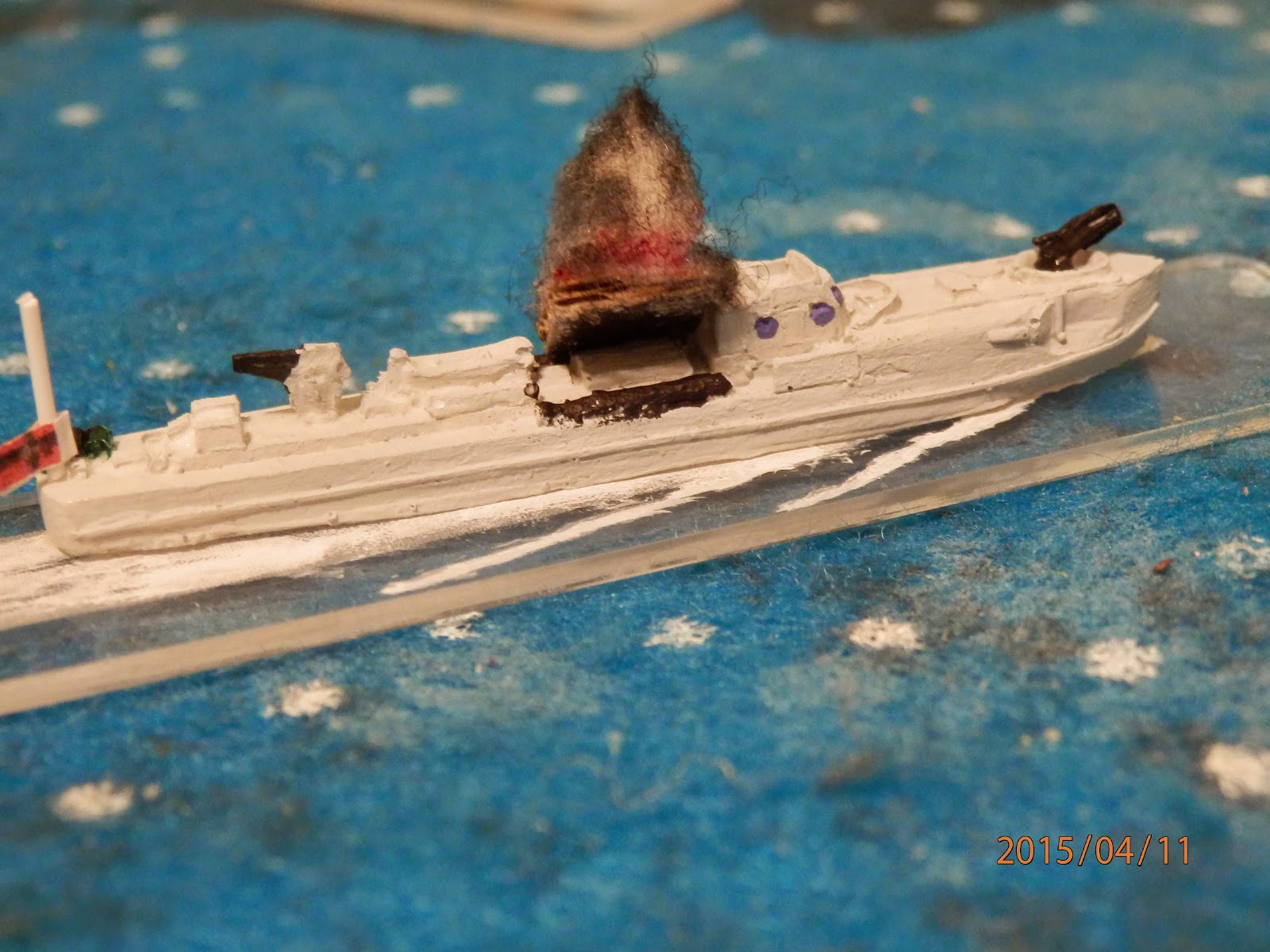 E-boat #2 breaks off the action

E-boat #3 , feeling lonely,  decided to fire two torpedoes at the HMS Cleveland which had finally entered the fight.   Fortunately crew on the Cleveland saw the wakes and started a turn.  The minute turned into an hour as Cmdr Lightfoot waited for the crash; it never came. 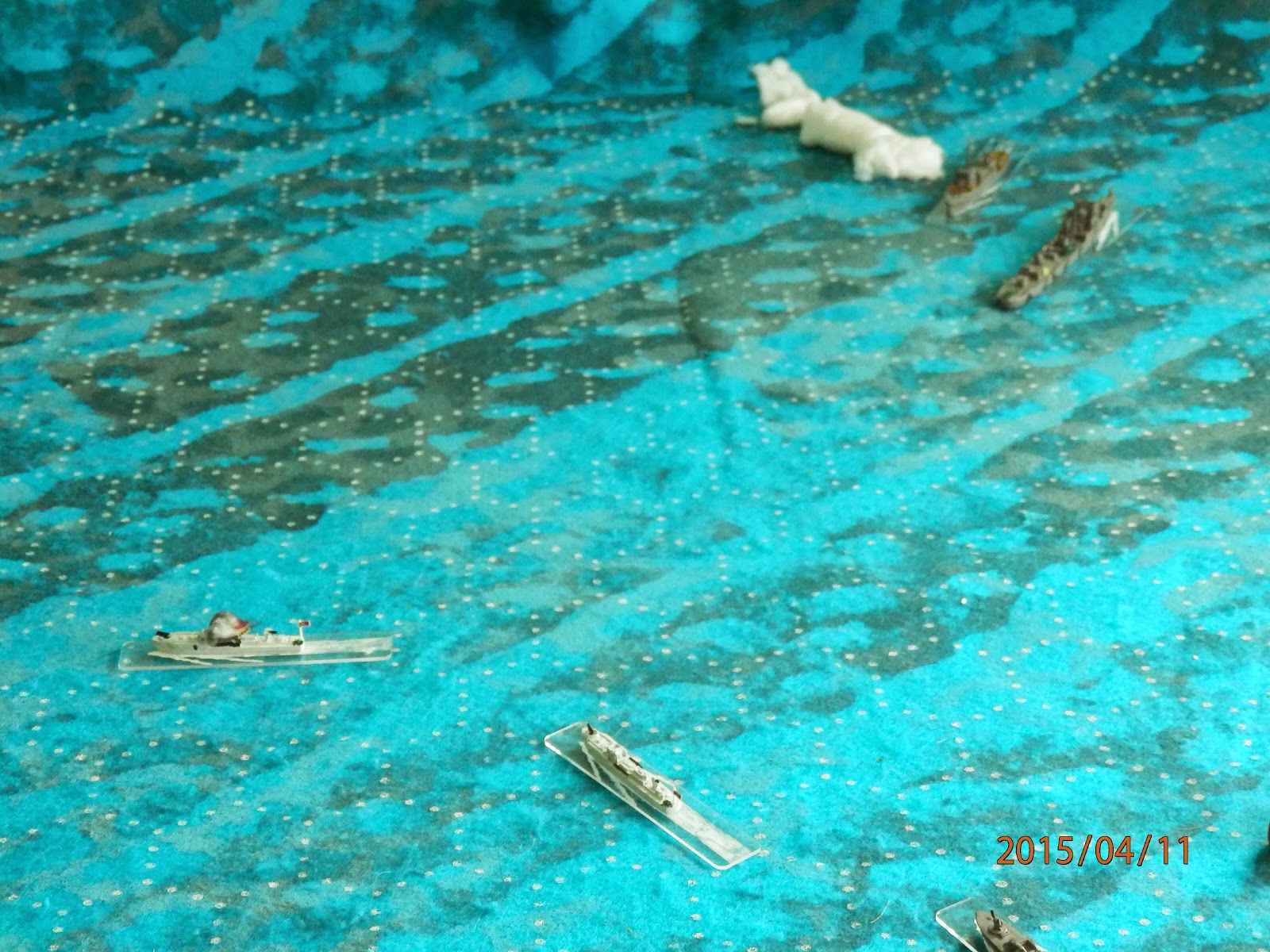 E-boat #3 has broken off after firering his torpedoes.  HMS Cleveland has turned away and HMS Rye also turned while laying smoke. 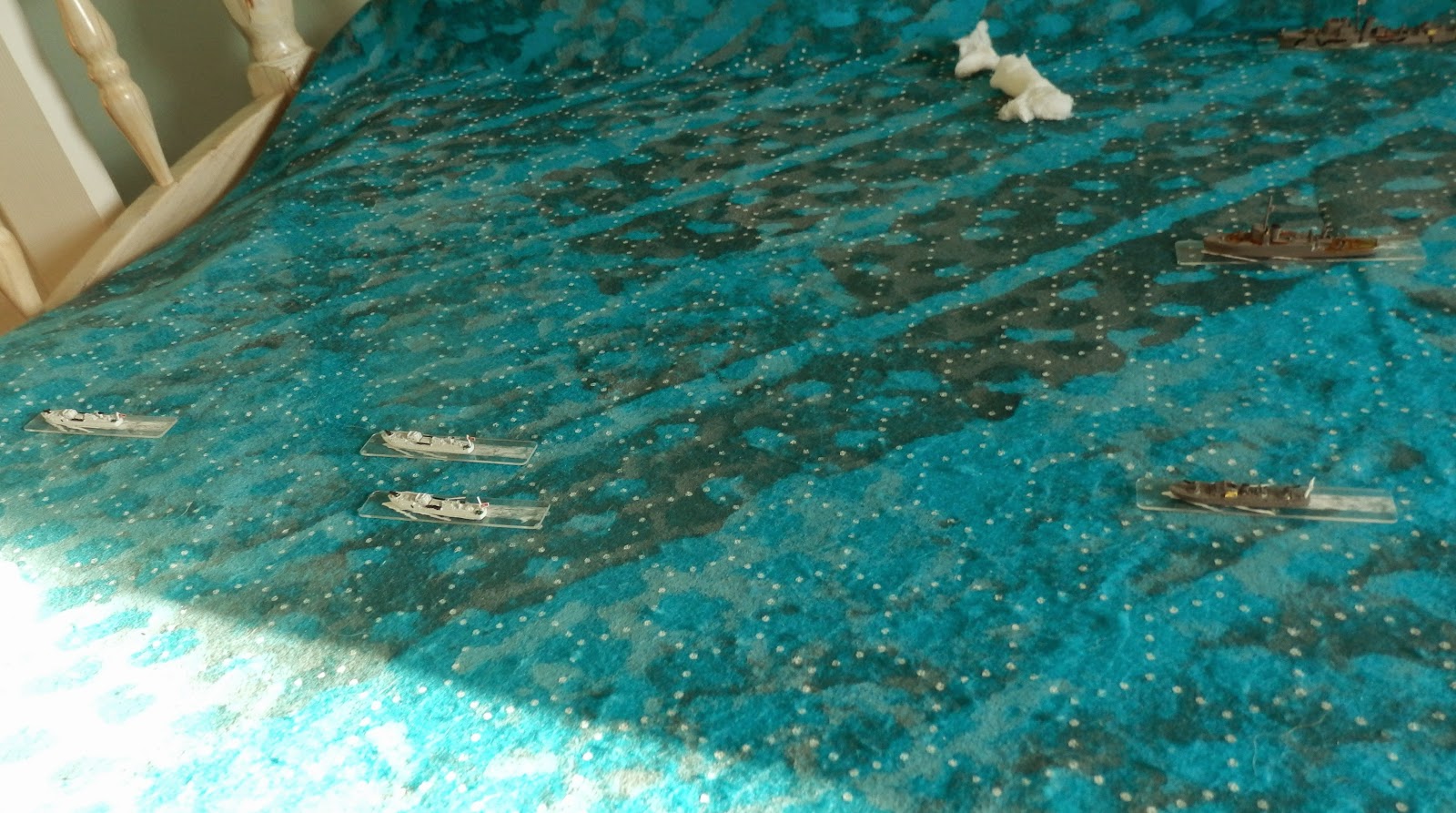 With that the e-boats left and danger averted!

The fairmile crew would later pull into port heavily damaged but the only damage the convoy received.  Cmdr Lightfoot realized that, even those this was 1940, sometimes the escorts did win!

Fast fun game!   The e-boats were clearly at a disadvantage due to visibility but it played fast.  One torpedo hit would have changed the game.

For those of you wanting to play this I used early e-boats armed with LMGs up front and 20mm gun aft.  The fairmiles had a 3 inch gun up front and a lone 20mm aft.  Would be interesting to try this with later model e-boats.


Posted by FlightDoc at 1:34 PM No comments: