Fianlly pre ordered Donnybrook.   It was really difficult but that is another story.   While waiting played a game using Sharpe Practice but inserting the combat system for Donnybrook.  This was difficult as I don't have the rules yet but worked quite well I must say!

This was a pirate raid by Black Bart  (Gr II) and 22 pirates against Stuart's Towne.   The initail defense were two militia in the tower. 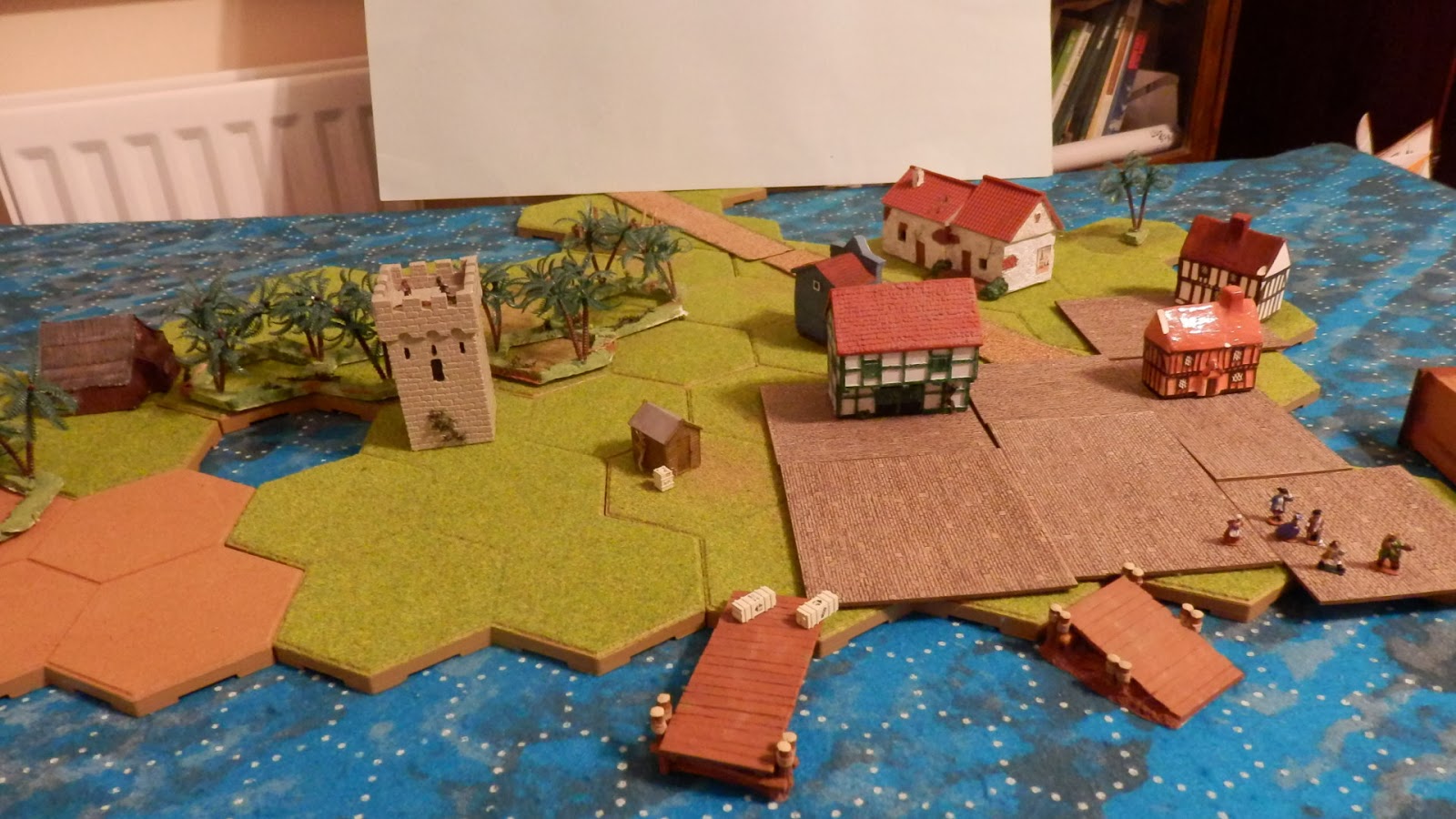 Stuart's Towne!!
The pirates landed in two boats only carrying 8 men, one at the beach on the right and 8 more at the dock.   The rest had to come in two cards later. 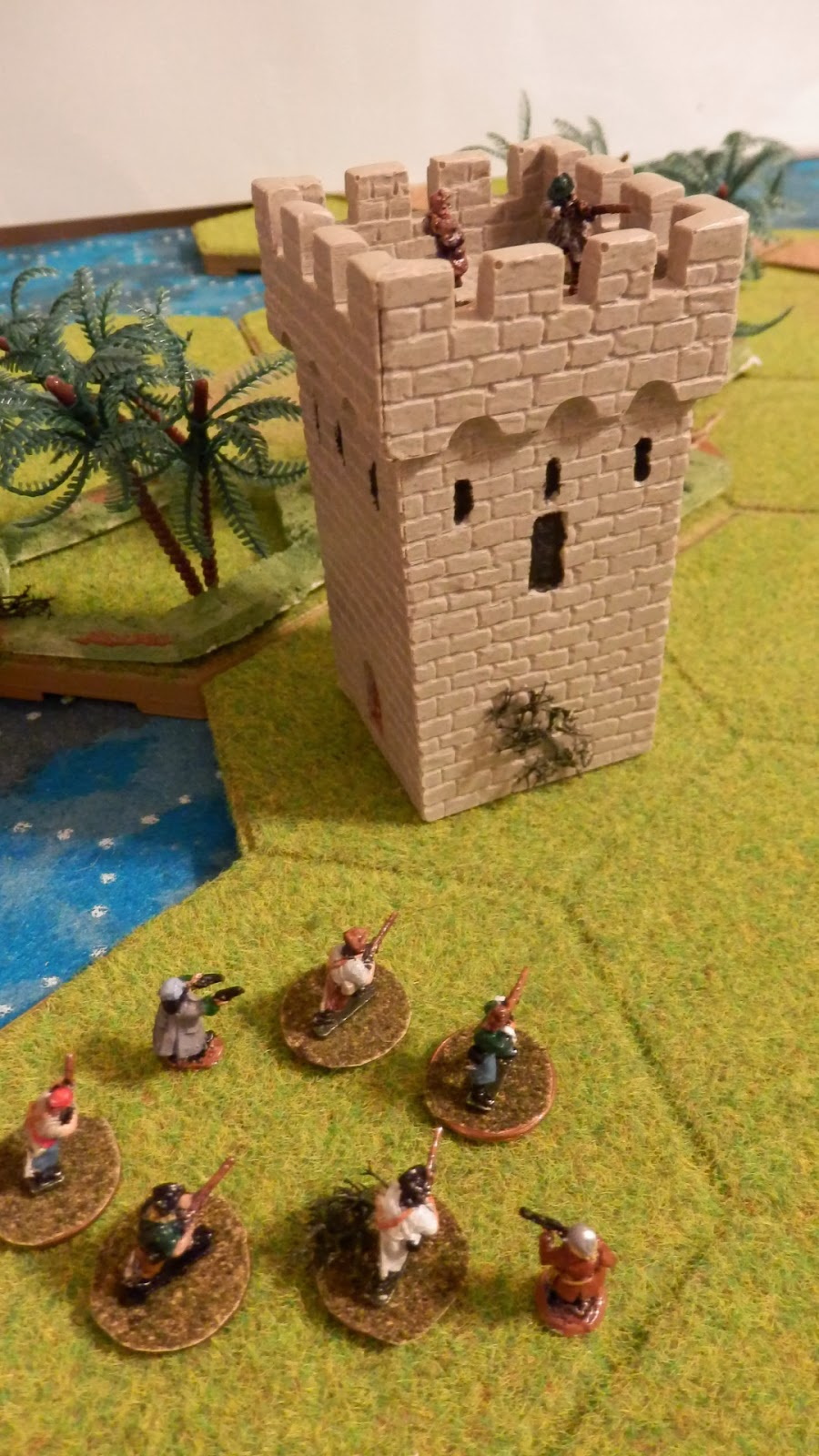 Pirates quiet the militia in the tower led by Buccaner Dan.

Black Bart landed in the towne with the goal to ransack 3 buildings.    Unfortunatly 6 militia showed led by Lt Tucker. 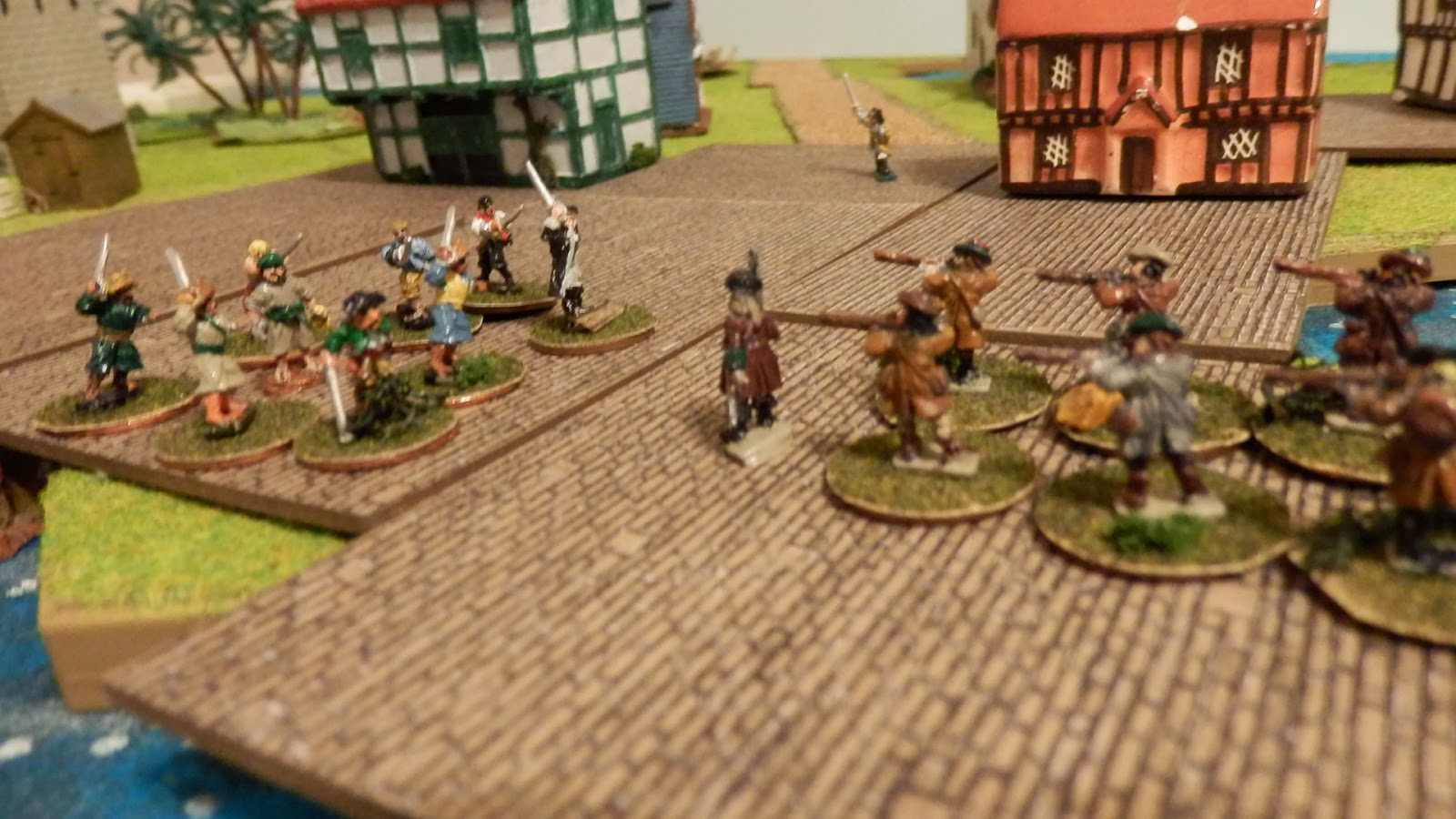 Despite the pirates rolling D8s and the militia rolling D6s the Donnybrook was a draw with both leaders lightly wounded.  The militia retreated to the Salmon colored house.   They were just buying time until the regulars showed up.
Meanwhile Buccaner Dan ransacked one house and started on another when... 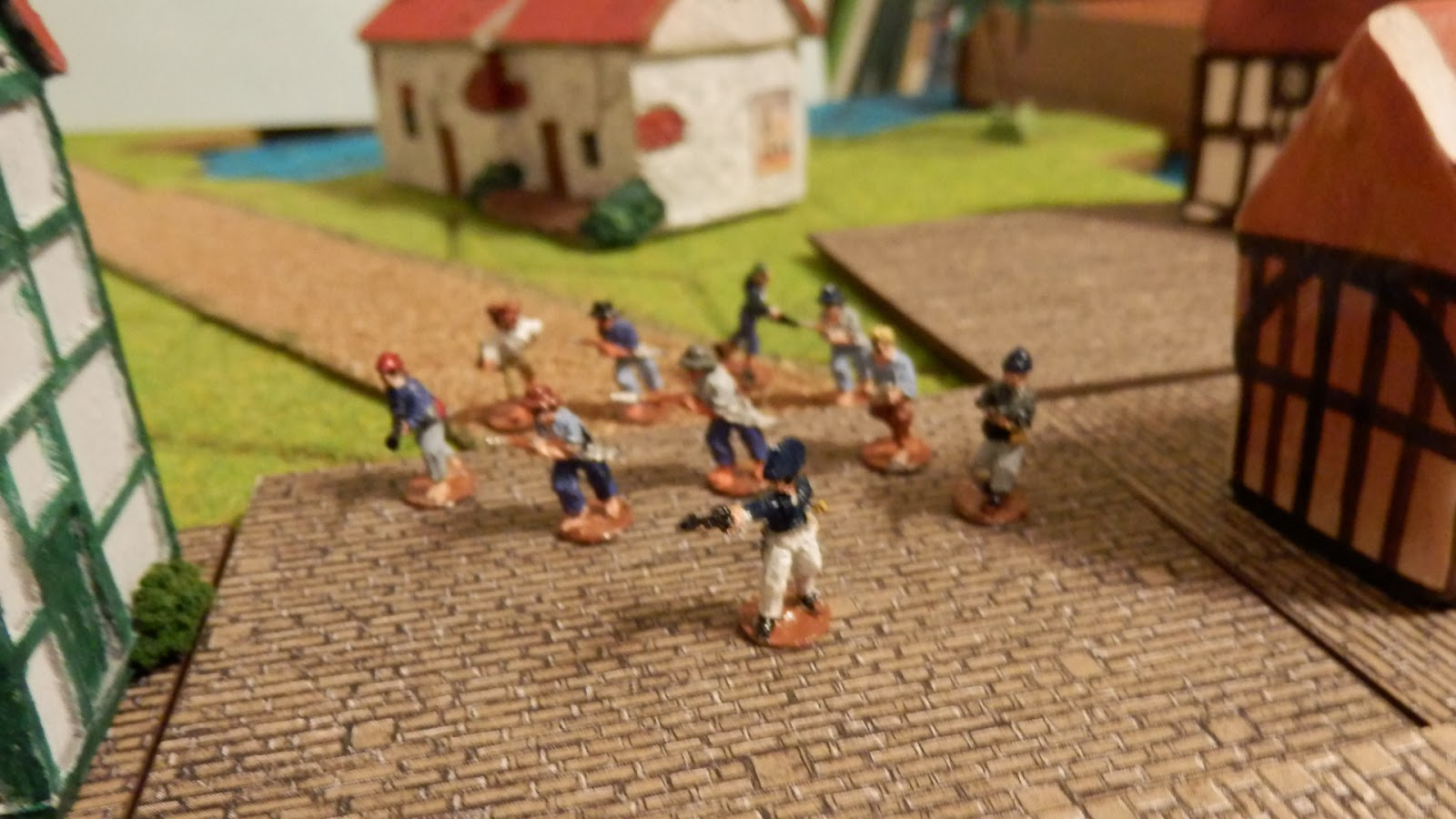 Lt Radford showed up with some sailors from the HMS Anglia. 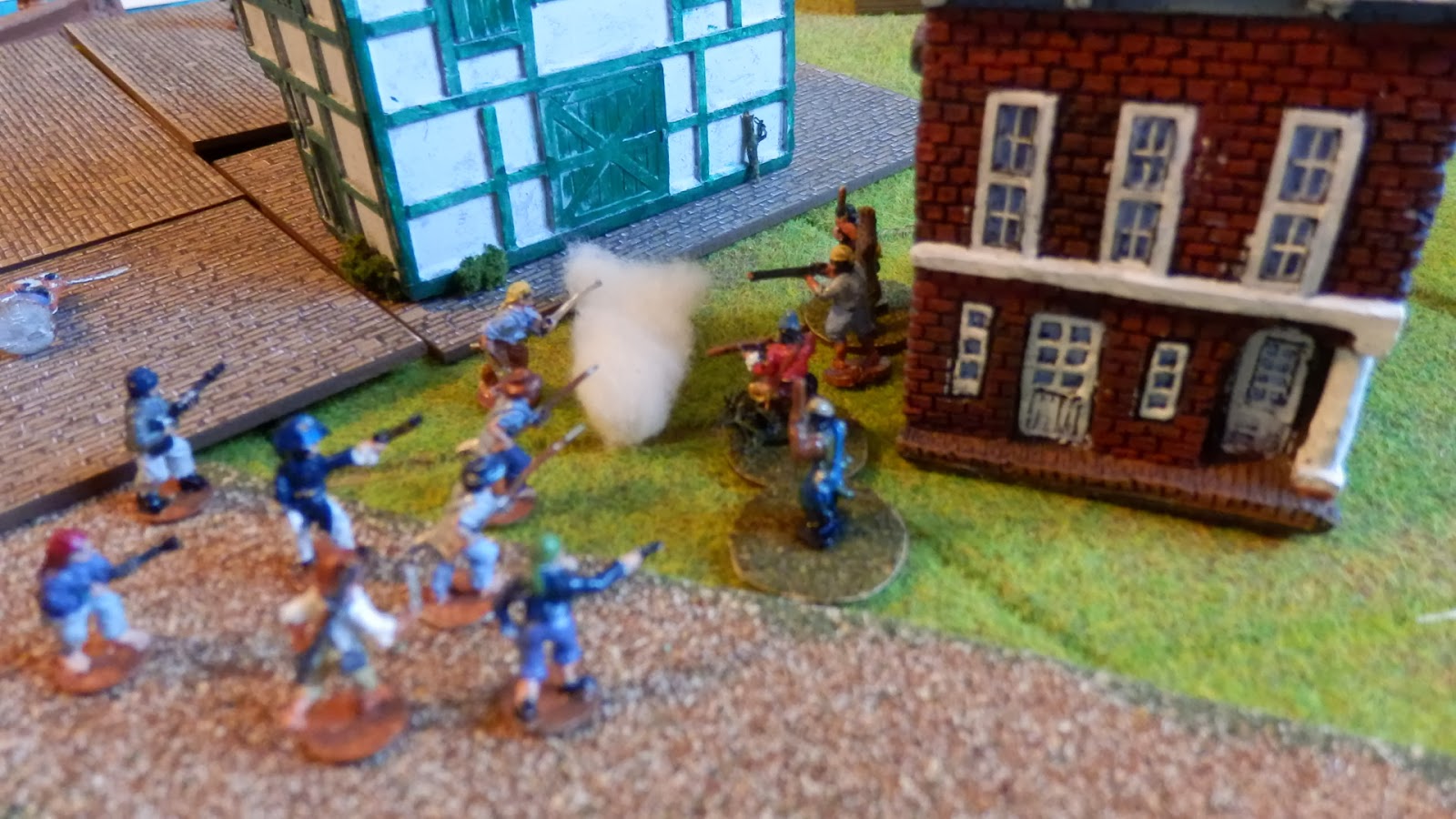 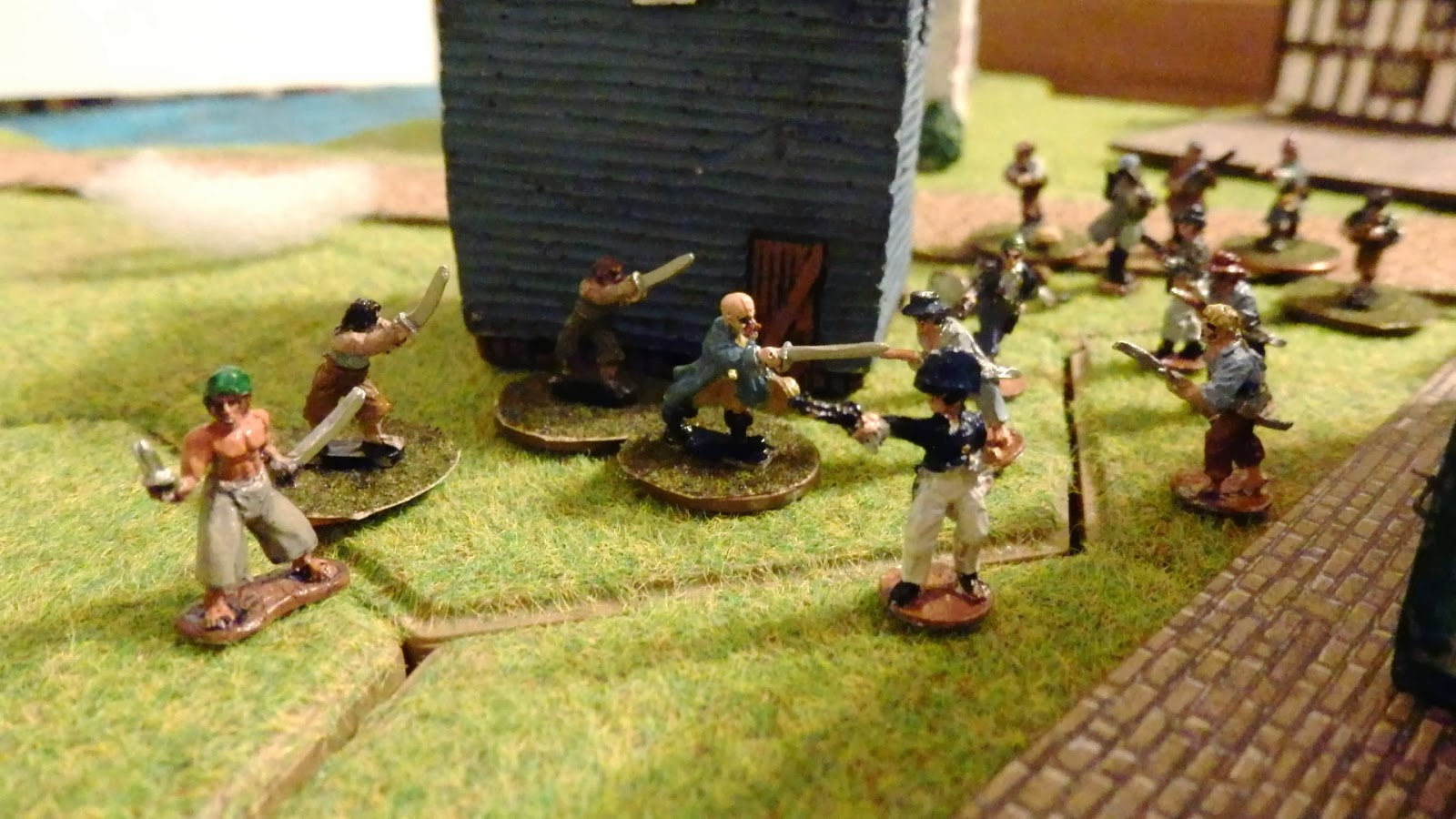 With HM sailors eventually getting the better of the pirates and killing Bucanner Dan.
( Don't you hate when your figures stop fighting to pose for the camera like the pirate on the left!) 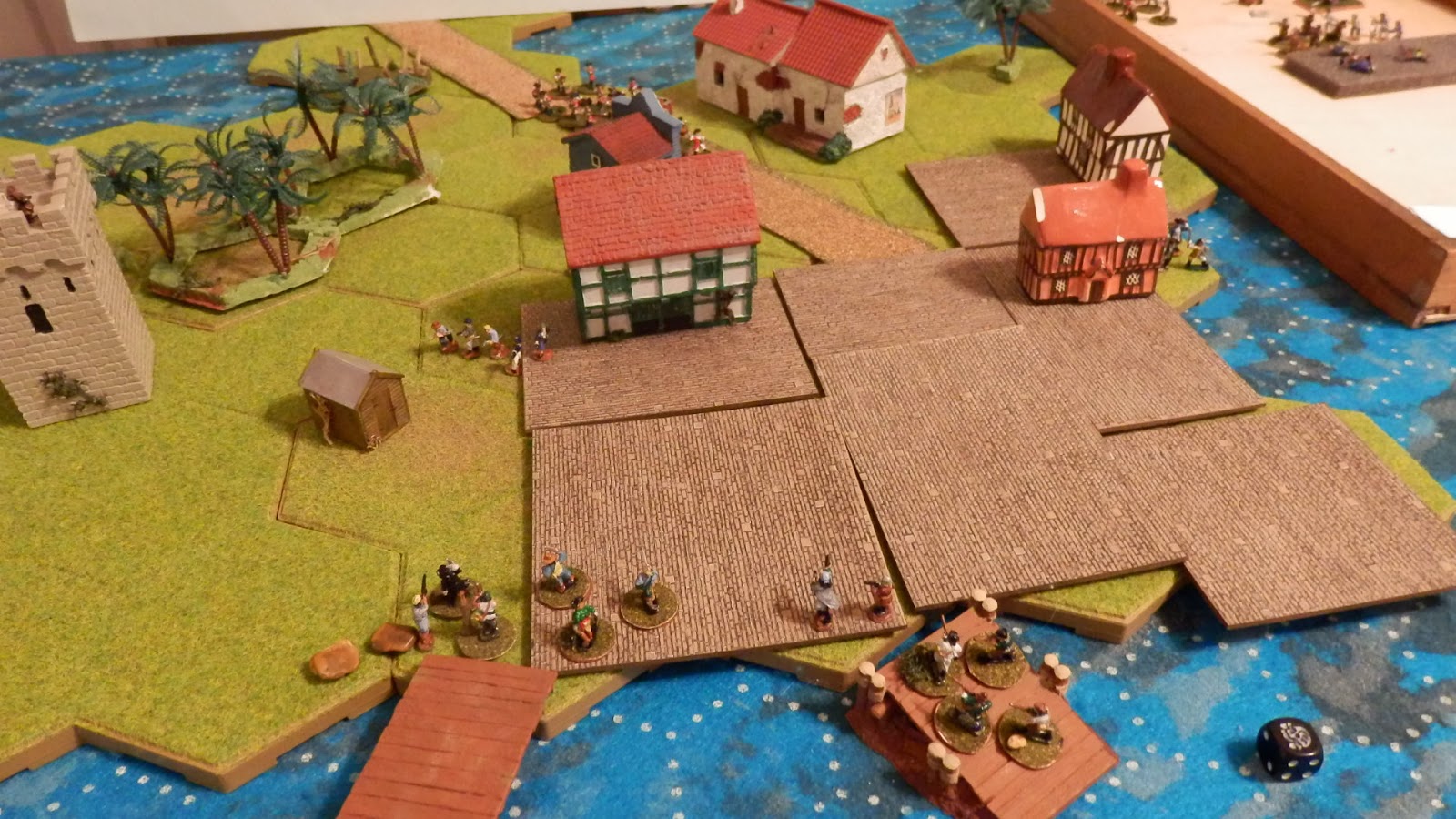 With this setback the pirates retreated back to the Docks as did Black Bart.   Lt Radford was not keen to close as his numbers had dwindled significantly.   Lt Tucker and his survivors were still in their house.

At this point drums could be heard... 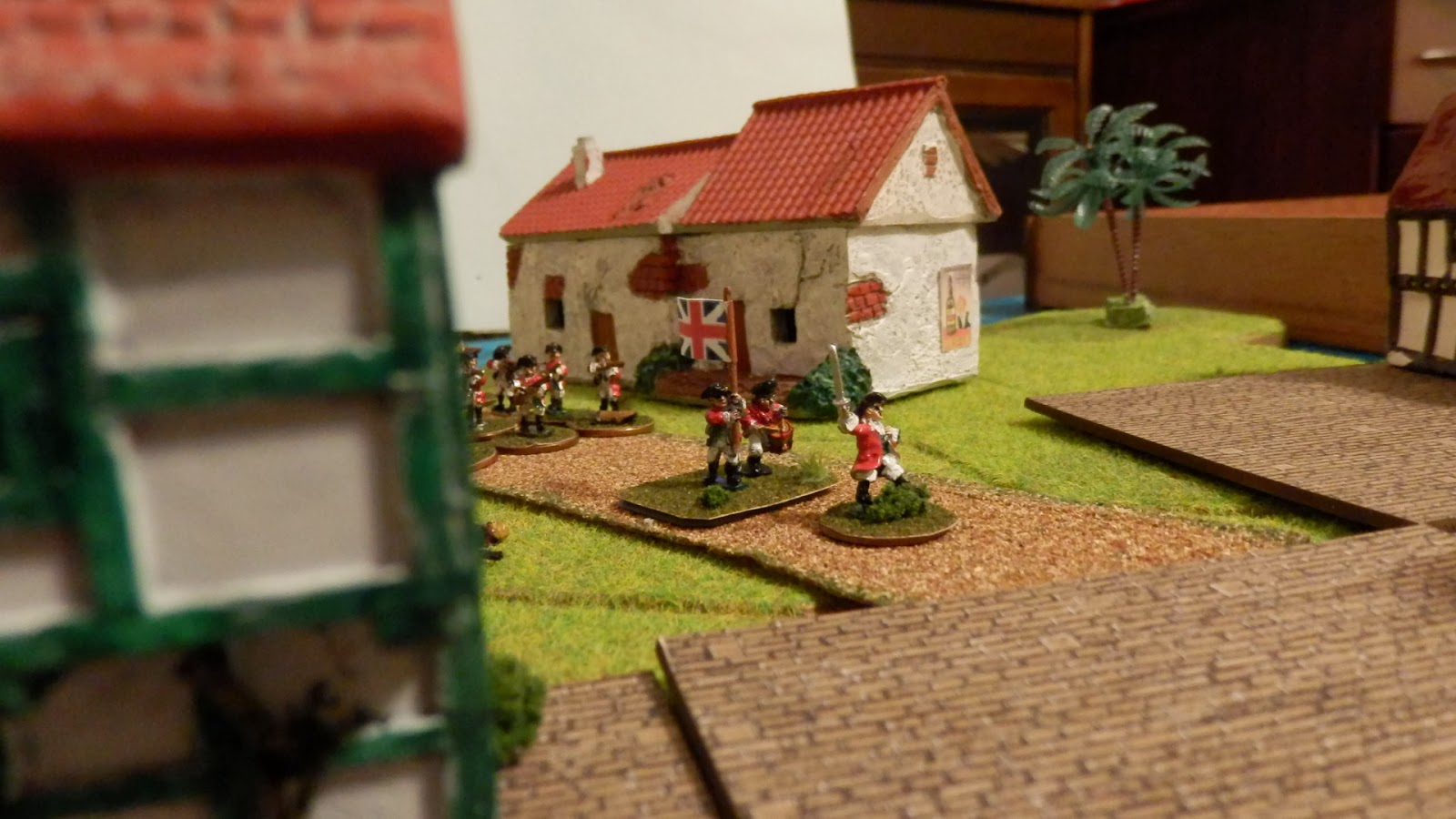 This sealed the deal for Black Bart and his motley crew entered their boats and rowed back to their ships before the soldiers could line up to fire.
Stuart's Towne had been saved!!!!!


Great game that played pretty fast.   I actually liked my modifications to Sharpe Practice.  Curious to see how close they are to the Donnybrook rules.

For those of you that want to try this

Militia come in on the first reinforcement card;  sailors on the third, Queens own on the 6.

Hope everyone had a smashing holiday season!   I had plenty of relatives over so played English tour guide.  The weather has been mild compaired to most of the US so it was easy to get around.   Not much game stuff for Christmas; just some Peter Pig WW II scots and partisans and one US Duster for my vietnam scenarios.  However with some Christmas money I ordered some scenery from "fights on" for my air games and will order " Donnybrooke" a set of horse and musket skirmish rules.  From what I have read they have incorporated most of the fixes I have been making to Sharpe Practice.  I will probably meld the best of both rule sets keeping big men but getting rid of shock.

Finally played a Bag the Hun game using my spitfire squadron based in Malta. This is an interesting squadron as they have many veterans but no one gets along and the squadron CO was killed the first mission out and has yet to be replaced.  The Group Captain doesn't feel either Flight Lt is promotable.  Four of the pilots are on a CAP mission...


" Redbridge this is Central Line.  Bandits approaching north of your position angles 12."  Flt Lt Wilson acknowledges and moves north finding Italian bombers.  He manages to move his flight in behind the bombers. 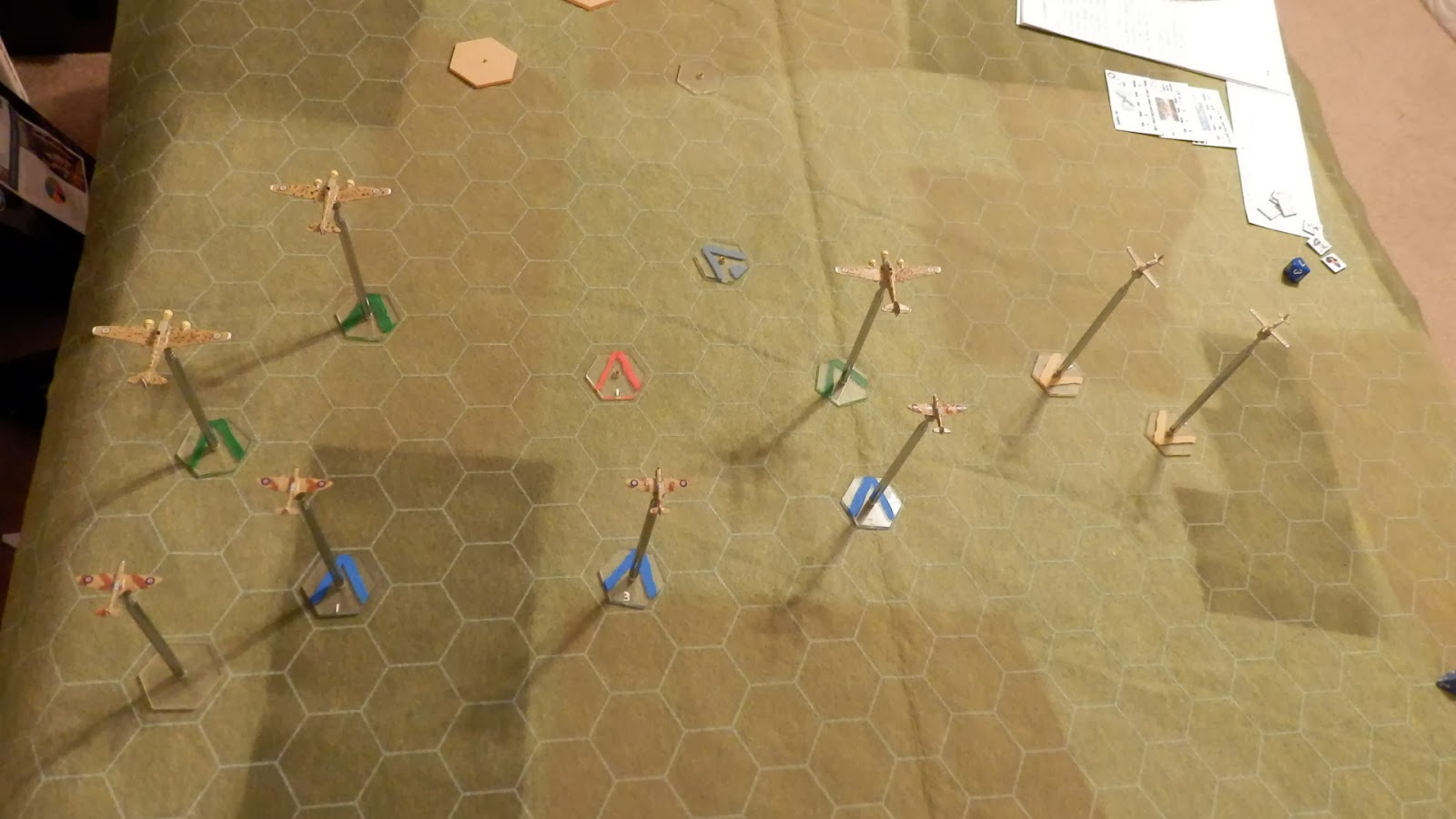 The initial shots are not effective as the bombers rumble on.      The Brits doggedly continue and Flt Lt Wilson gets shot down by return fire!
Then a nautical voice appears over the wireless, " Redbridge, this is Seaweed.  Thought we would come and play if that is ok. " 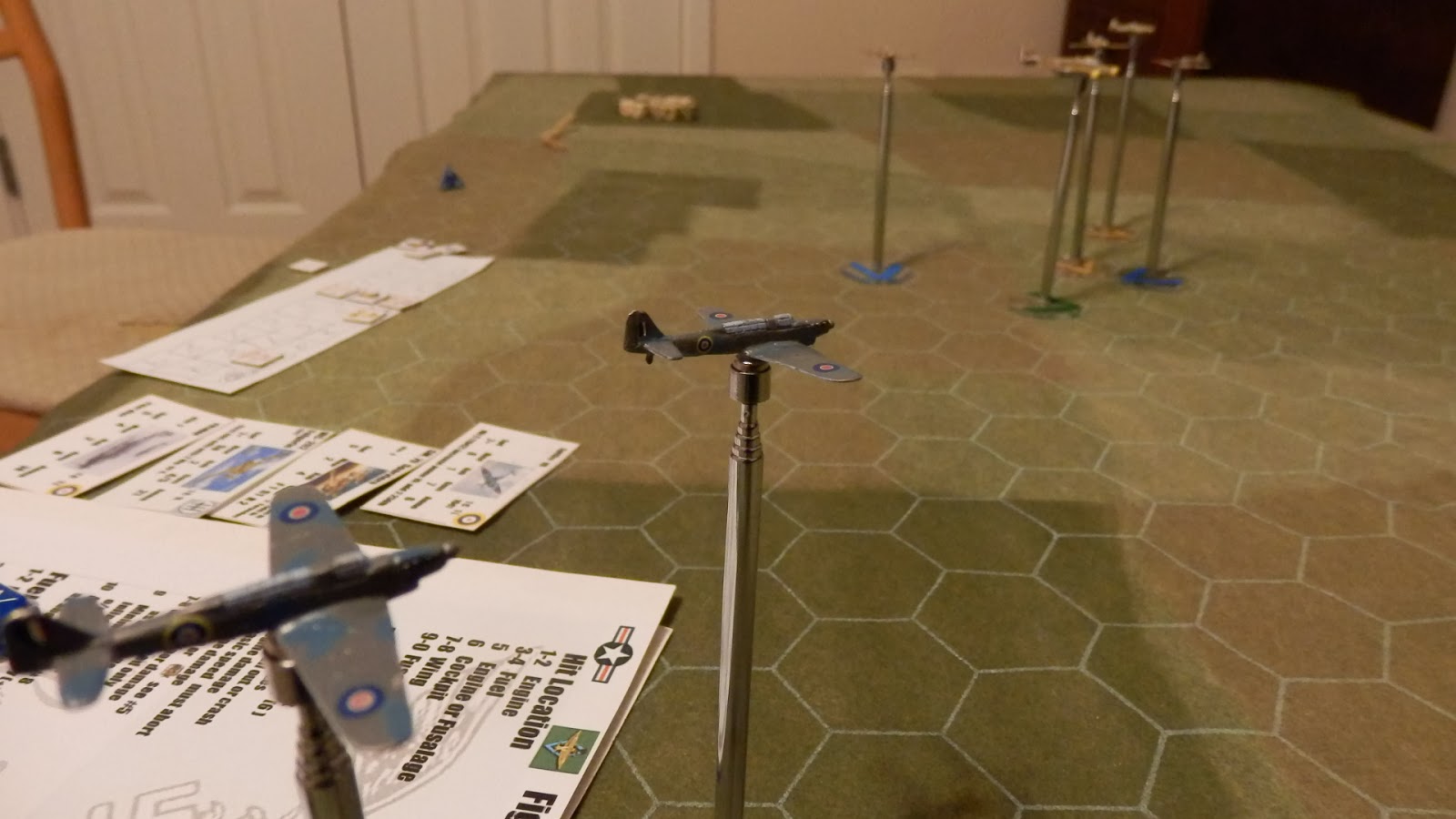 A random event brings 2 Fulmars into the battle!! 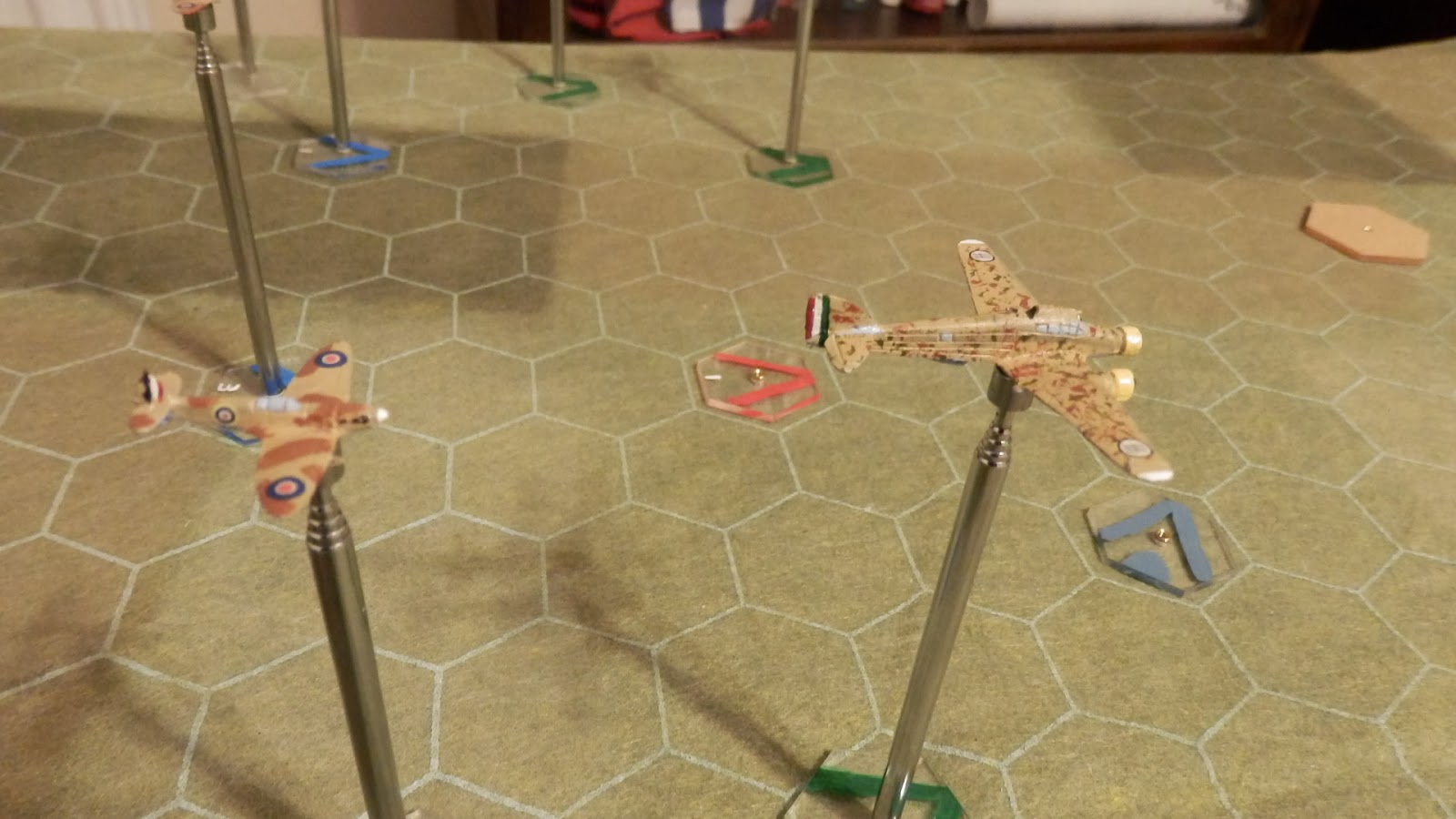 Sgt Scrum Patson gets one!!! 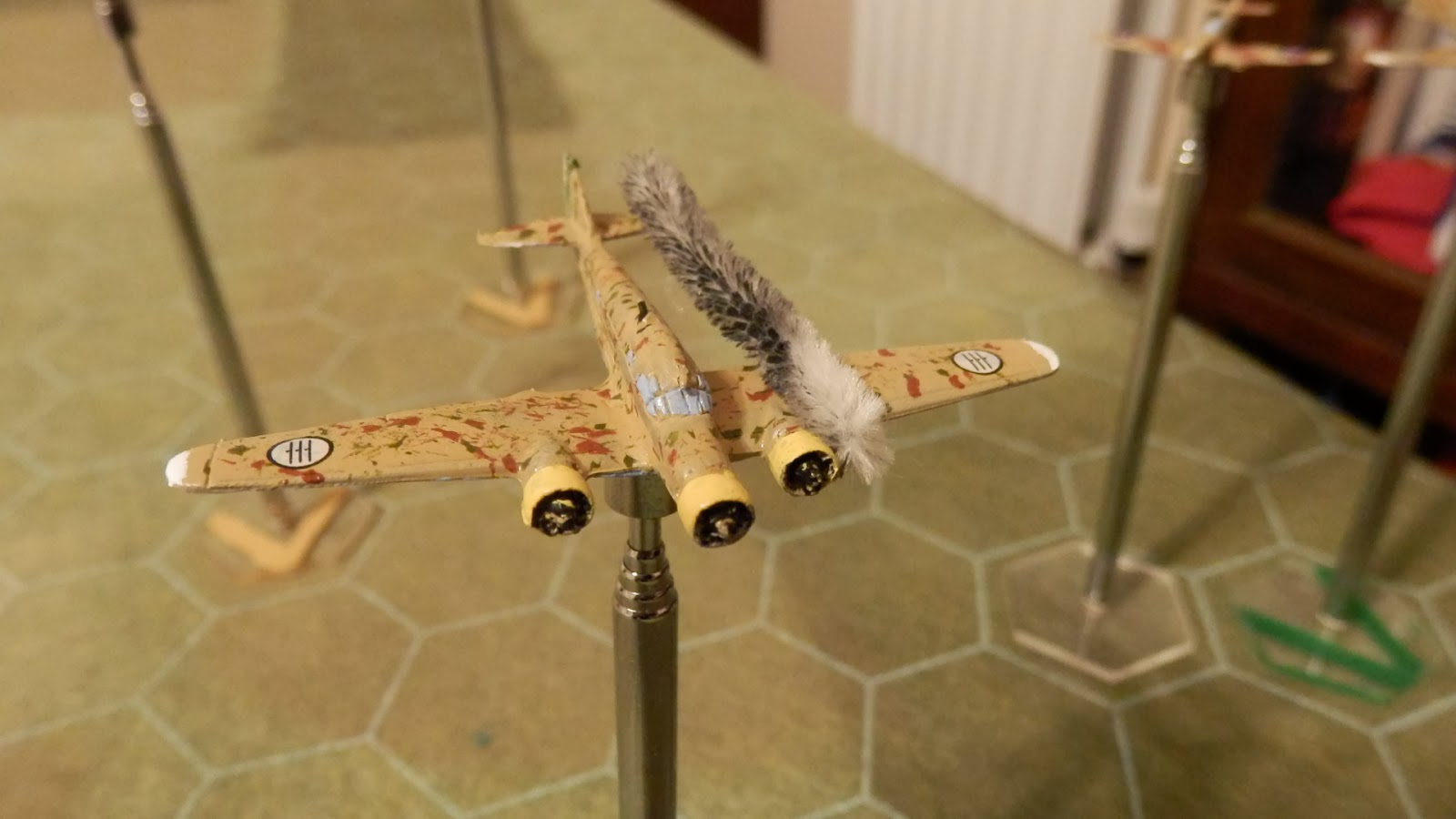 Another is turned back! 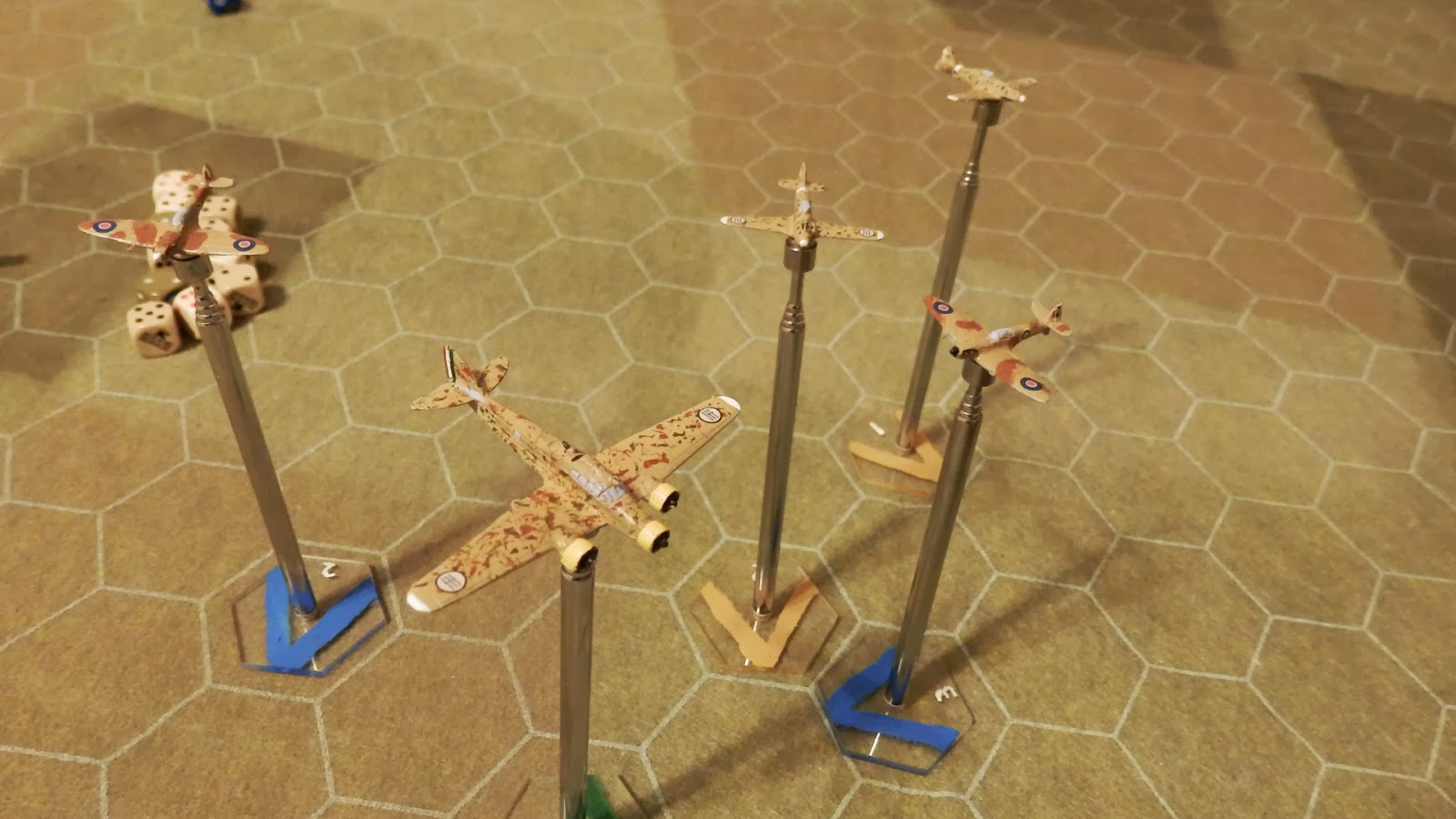 Scrum manages to down another bomber and one more aborts of the 8 bombers attacking.    Fortunatly they do little damage to the airfield.

Post game Flt Lt Wilson manages to bail out and will miss one mission.  The squadron is introduced to Lt Stephens RN, and his stranded Fulmars.  The big news (other that Scrum getting 2 kills in one mission) is the new CO shows up; Sq Ldr Joey Lynch.  His is a 3 kill veteran with a huge ego out to make a name for himself.  The squadron already dislikes him!

Also inluded 2 pictures from some horse and musket stuff I have playing around with.   This is a wagon ambushed by Sneaky Pete. 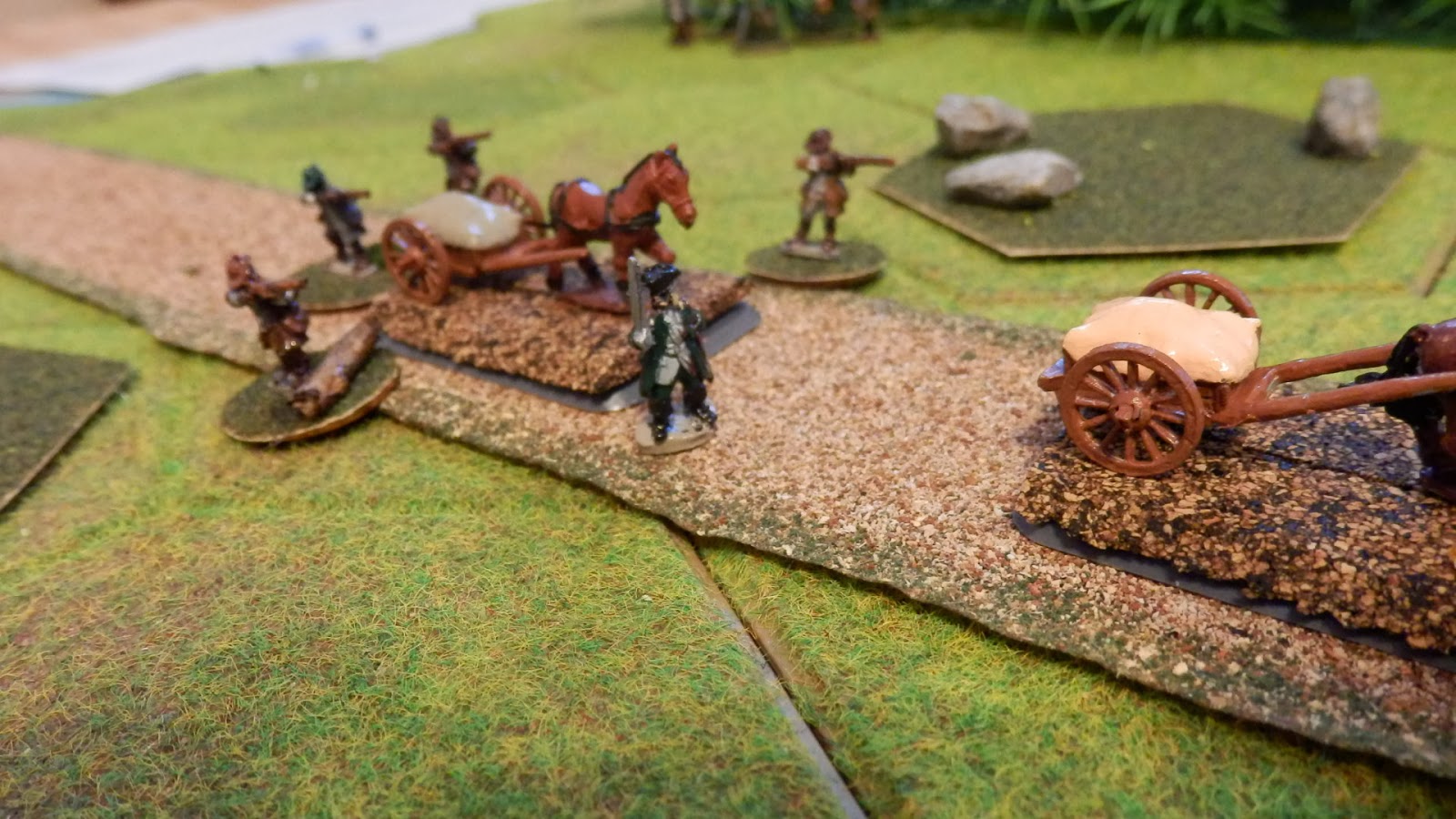 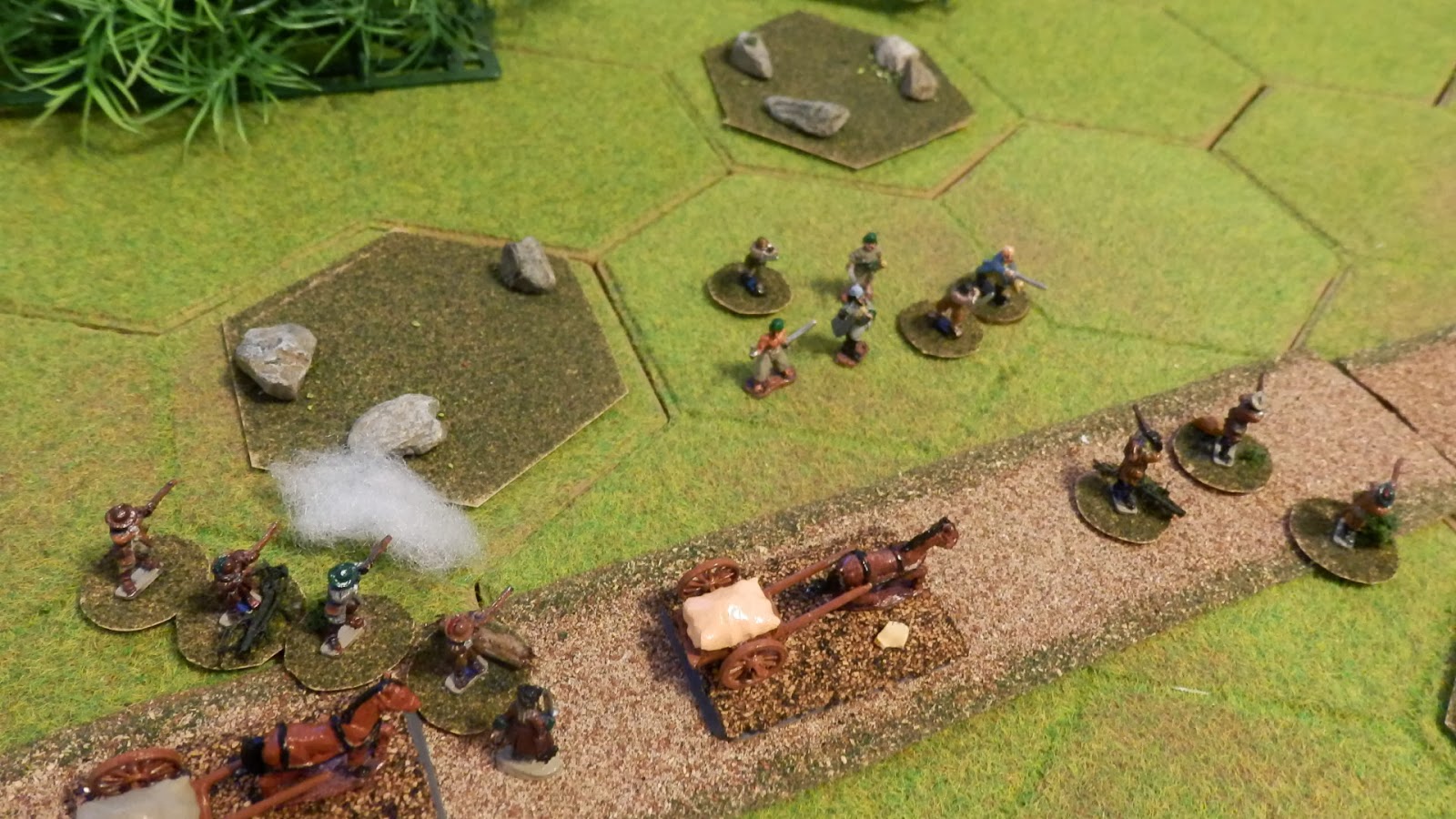