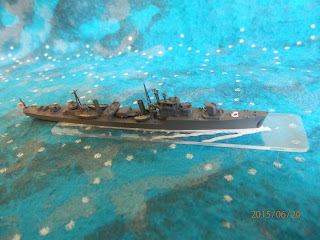 This picture has nothing to do with the story; I just thought it looked good!

Lt Blake disliked LCdr Caros.  He saw Caros as a lazy Romeo.  Why couldn't Cdr Broadstreet and the Admiral see that.  Blake knew he could do better; but he was stuck as a mission planner at Admiral Hollyworth's.
So, when a diversion was needed to occupy some Jap guns while special forces were inserted he knew just what to plan.  LCdr Caros' PT boats could go up against the 3 inch guns!
[ Last battle I rolled that Lt Blake did something to block LCdr Caros. ]

"What a crazy idea is this?" LCdr Caros thought.   Act as a diversion for some Jap coastal guns.  Why not send some Catalinas?  Still, orders were orders.

Caros would pair with Elmwood who was brand new to the unit.  Jackson would lead the other two boats and approach from the other side of the small bay. 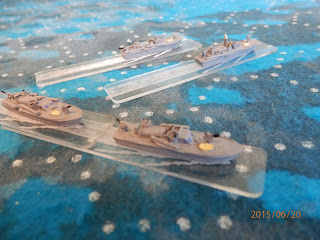 The PT boats separate to start the mission.

Visability was 1,400 yards which helped 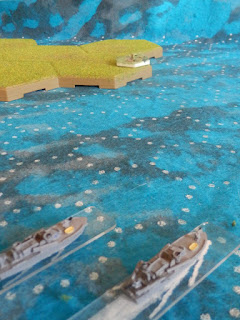 Caros and Elmwood approach the target. 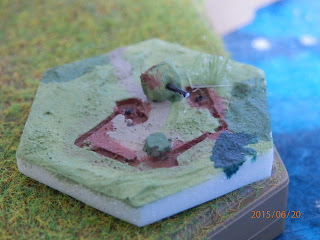 Caros and Elmwood demonstrated against the 3 inch gun for 20 minutes.  Caros' boat had a 40mm gun mounted on the back in the hopes of causing damage to the gun.
Caros' boat took some damage but then a Jap hit severely damaged Elmwoods boat and cut his speed to 10 knots.  Caros' boat fired furiously at the guns and moved up to make smoke. 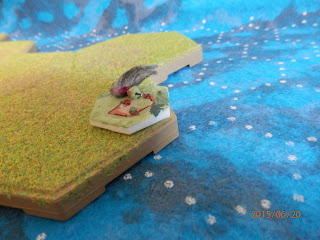 A lucky hit starts a fire!

Meanwhile Jackson and Rains were busy with a pair of 37mm guns on the other side.  They also found a barge that they heavily damaged.

As they were pulling out Elmwoods boat was hit with 20mm shells and she gave up her ghost. 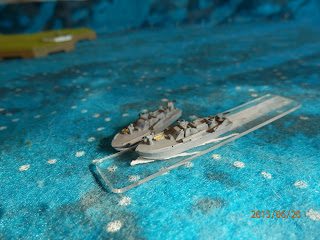 Ens Jackson taking off Ens Elmwood and his crew.

The mission was successful!   While losing one boat they created the diversion, damaged a barge, 37mm gun and a 3 inch gun.  Afterwards the CO, Cdr Broadstreet, greeted them warmly with congratulations.  Lt Blake was disappointed to say the least.  LCdr Caros was relieved the mission was over; he still did not realize he had an enemy in high places.

I volunteered to playtest TFLs modern version of their CoC rules.  It made sense in that I was a playtester for CoC.  To get use to the rules I did not add Grunt's Forward to them though they would work just fine.  Fighting Season is suppose to come with a campaign game built in which we don't have yet.  I suspect it will be based on "hearts and minds" rather than characters so players could chose either or both!
As I only have one US squad painted up it was going to be a patrol across the country.  I did use Platoon Forward to roll up the board and had a key building in square 1.  For change of pace I went with an abandoned monastery. 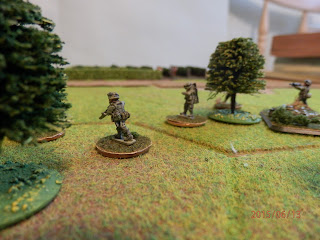 Sgt Humphrey checks his watch as the squad hits another waypoint.  In the distance you can see two civilians working a field.  Civilians are important in FS, they provide intelligence and have to be unharmed during battles. 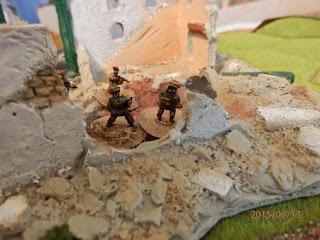 Taliban fighters set up at their jump off.

Sgt Humphrey took two men to go and talk to the farmers.  Through sign language the two farmers reported Taliban in the monastery.

As Humphrey's came back over AK-47s opened up and Pvt Jenkins was hit.  He dragged Jenkins back over to the trees and made a quick assesment; shot in the thigh.  Some quick-clot and a bandage and he would be okay.  He dispatched two men to carry Jenkins back to a medical hummer that was coming to meet them.  (When the coalition has a casualty you have to see how severe it is and if bad, get the man to medical care.  I really like this not only because I was a military surgeon but reflects life on the modern battlefield. ) 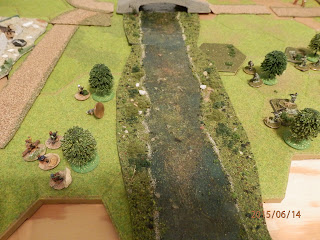 A firefight breaks out across the stream.  The US firepower starts to tell and the Taliban pull back from the trees. 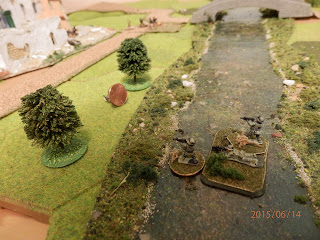 Humphrey's sends a fireteam across at the same time the Taliban commander also decides to outflank across the bridge.  The fireteam is pinned but the taliban force is broken. 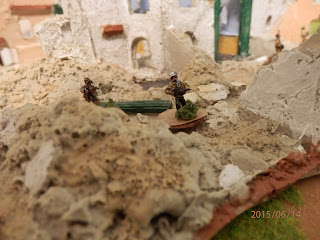 The remnents of the broken force retreat to the monastery.  With surprise lost and outmanned and outgunned the Taliban store their rifles in a cache and walk out the back as terrified farmers.

Fun quick game.   It plays differently than CoC but is very familiar to anyone who knows that system.  There are all kinds of rules for aircraft and RPGs that I have yet to explore.  Stay tuned for more playtests.  .  If you like the CoC system you will like this.  For now suffice to say I think this will be a great ruleset for modern skirmish gaming

Finally played a land based war game!  Using Donnybrook as the tactical rules and Rifles Forward as the campaign.  Still testing out Rifles Forward and really need to paint more troops.

Lt Elisha Fish was in a Pennsylvanian regiment commanded by Col Brooks.  His Company commander, Capt Madison, called him into his tent.  "Elisha, our spies have sent word of a food convoy leaving Clarksburg for Philadelphia.  I want you to take a platoon and ambush the convoy; bring the wagons back here."

Lt Fish took 18 men.  They picked a spot where the road narrowed as it entered some marshy ground.
Sgt Clark was a much better NCO so Lt Fish put him on the right flank closest to the ambush with 7 men.  Lt Fish was in the middle with 7 and Sgt Turner was on the left with 4.  Sgt Turner glared at Elisha when the assignments were made but he didn't care.  He felt Turner was a dud and he couldn't risk this ambush.

The british failed to spot the ambush ( unlikely) and ... 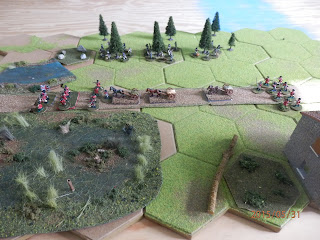 The positons of the forces. 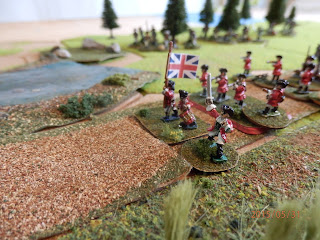 Moments before the first volley rips through the British forces!!

The lead group loses 4 of it's 10 men before they know it.  The aft group loses 3 of the 10 and it's NCO is wounded.  Both forces hold morale and turn to face their tormentors.  From the woods the Rebels win the gun duel despite the Redcoats greater rate of fire.  Elisha notes that Turner's group is not firing. 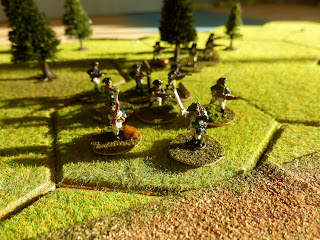 Lt Fish leads from the front.  Sgt Turner is behind in the trees.

Once in the open the Rebels falter .  They stop to fire. 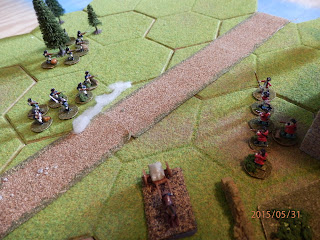 Fish rallies his men and charges! 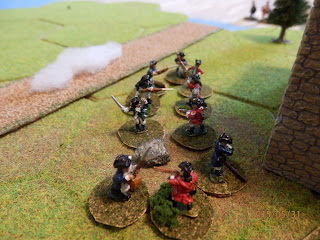 
The fisticuffs proves the rebels better today.  They lose no one with the redcoats losing 2.  The British NCO moves into the farmhouse and with a lucky sequence of cards escapes out the back!

Sgt Clark easily wipes out the lead redcoats including their officer.

Huzzah on another victory!!!!

Post game Lt Fish demands to have Sgt Turner removed; Capt Madison states that Sgt Turner is a good NCO and Fish needs to work with him.   ( Unbeknownst to Lt Fish, Sgt Turner use to work for Col Brooks and Brooks thinks he is a fine chap.)  Our other post game event was Col Brooks asks a favor; for Sgt Turner, Lt Fish and several other men to get a message to a farmer behind the lines!
Is Turner up to the challenge?  Will Fish succeed?  I don't know but it will be exciting!

For those of you that want to play this the British had the following:
1 Officer ( lvl 1) and 10 men
1 NCO  (lvl 1) and 10 men
3 carts full of food.
The game generated 10 additional British troops but I didn't have any painted up yet!