Playtesting of Release the Hounds proceeds with outside playtesters now on board.  This has forced me to actually write down the rules which is a good thing.  It drives clarity.  I have also tweaked the sighting mechanism.   In night combat sighting is critical so I wanted a system that is tense and allows for ships close that don't see each other.
I think the rules are 80% there.  Which means I can start to  put together Flotilla Forward as well.  One of the main missions, as you can imagine, is Patrol.  This mission is similar to Squadron Forward so far-- we will see where it goes.  My first flotilla is a MAS boat flottila; the fifth based in Tunisia.

SubLT Rizzo could only find one good thing about being in Tunisia; at least he was saving money!  Lt Bendinni  [ glum/ religious] had come back from daily Mass depressed as usual when he called Rizzo into HQ.  Rizzo,  you should have gone to Mass with me today, the higher ups want a patrol tonight.  Take 4 boats out into the Gulf and see what you can find.  Take Melli with you since he is in love with Il Duce!
Characters
SL Rizzo  Cheap/Money               Boat one int  1
Midshipman  Ciero   Cheery/ Alcohol   [mustang]    Boat 2  int 2
SL  Melli   Foolish/Govt    [mustang]     Boat 3 int 1
Midshipman Catona   careful/position  [military]    boat 4  int  2

Rizzo assigned the officers to the two boats with the junior crews.  He then attached a midshipman to each officer.  While SL Melli might be a Fascist to the end, he was a former petty officer [his political connections got his commision] and knew how to handle a MAS boat.  This would form 2 teams of boats.   They would sail just under a mile apart.   SOP would be if they came under flares they would accelerate forward.    Also if multiple targets were sighted and the order to attack was given by Rizzo, he would take the port targets and Melli would take the starboard targets.  These SOPs were important because signals had to be kept to a minimum in the heat of battle. 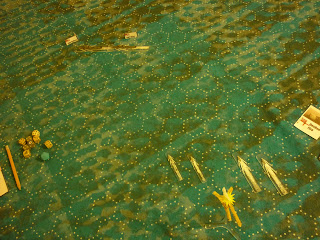 Initial positions of the ships
Each hex is 500 yards
Max sighting 4K yards
A flare popped  a mile behind Rizzo.  Unfortunatly he was use to this now that many allied ships had radar.  He accelerated his boat as all eyes strained to see something in the darkness. 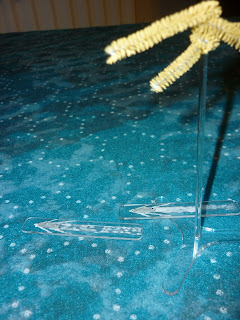 Next flare on target!
The light above him made Rizzo wish he had gone to Mass!  Now one of his men called out a ship off the port bow.  It was an enemy frigate.  [got to roll this up--cool :) ]    Signal the other section, quick turn and prepare torpedoes.   With only one puny cannon in the back the MAS is a true one shot platform. 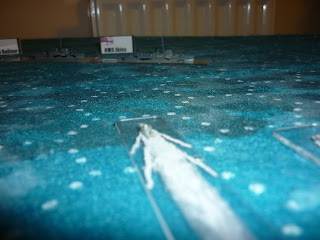 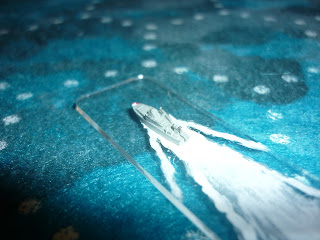 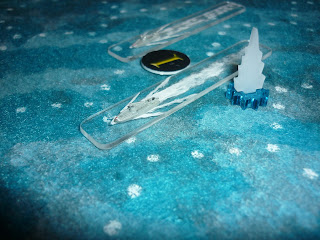 Splinters hit the MAS boat and disable the torpedoes!
Despite no torpedoes, Rizzo leads Ciero in the charge and torpedoes are released at just over a mile. 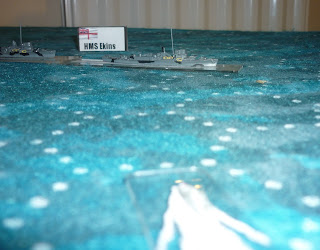 Melli's team releasing torpedoes at 1 mile.
HMS Ekins had no time to turn and 1 of the 4 torpedoes hit aft severly damaging the engine room.   The MAS boats left the scene quickly.
HMS Balfour started a turn but it did not help. 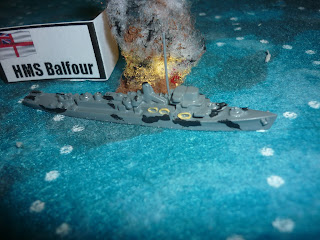 A very fun and quick game.  It played in less than an hour.
Post game the Flotilla reputation goes up by 1.  The integreity of boat 3 improves to 2 and Lt Ruzzo meets Sophia Luccia, a very senior Air Force officer's daughter.   They have fallen in love.   This could get interesting since daddy doesn't know.

Hope you enjoyed the update of both products, the scenario if you want to try it and the story of the V Flottiglia

Sorry for the gap between posts.   Have been in the US taking a course for "senior medical leaders".
It did give me time to read a great book on the challenge of leadership. I led a Military Police platoon briefly and have been on "G" series orders for the last 8 years for those of you who know what that means. 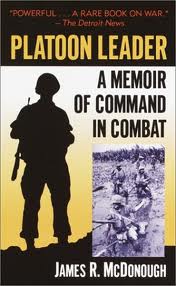 This book realy talks about the strain of command and the anguish of not always getting it right better than any I have ever read.   It's lessions apply not only to Vietnam but to small unit leadership throughout time.   It truely talks about "Platoon Forward".  For the gamer it also makes for some great Vietnam scenarios.  The Cross of Iron was the best war novel I had ever read but I think this one matches it and it is not a novel!  {Honorable mention goes to Delilah,  Soldier of the Great War and Bomber.}