First got a number of games in with my brother who visited me for three days last week.  He is a dedicated board gamer but we converted one of his board games to miniatures. 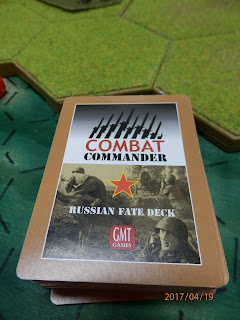 We played a random scenario from the game and rolled up the board using Platoon Forward.  It worked very well.  It was a Russian attack into a factory. 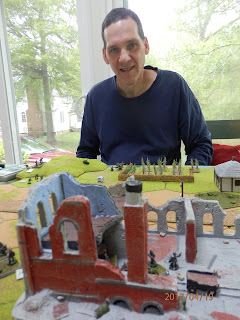 My brother-- still not realizing miniatures are the way to go! 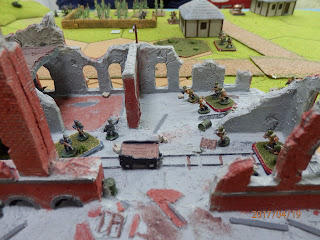 I was the Russians and we had a good brawl in the factory and in the corn field just outside.  The game lent itself to miniatures and played well.  Each stand was a squad.  While not my usual skirmish scale I enjoyed it and it is always good to share time with him. 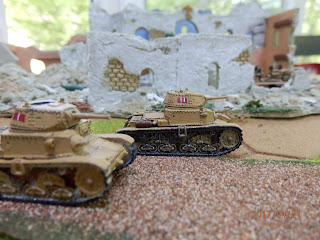 He returned the favor and we had a skirmish outside of Tobruk.  My Tommies couldn't get across the open ground and we lost.  It also has caused me to think artillery might be too underpowered in Combat Patrol as my 3in mortar barely caused a ripple in the Italian MG's spaghetti sauce.

Now on the Sails Forward.  Lt Ronault escorted several merchants safely with no contact and was finally rewarded with a promotion.  ( Guess the Commodore reconsidered if he was too harsh about the wine debacle. Either that or it is because I finally finished painting up the cutter HMS Seawitch!) 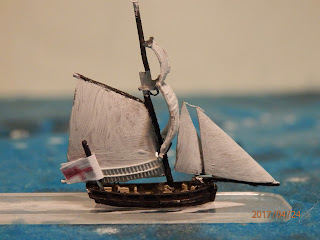 HMS Seawitch
Ronald is given the HMS Beagle.  ( Forerunner to the real HMS Beagle)  It is a 16 Gun brig armed with 18 12 pounders plus 2 6 pound chasers.   ( for Post Captain players it is the HMS Savage with 12 pounders instead of Cannonades.) 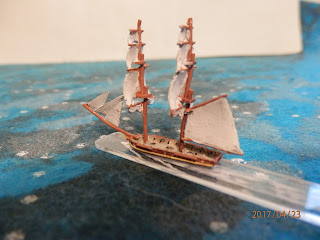 He brings his own officers aboard and gets 2 new Lts.  The crew of the Beagle is crack; their Lt being recalled to London to take command of a 6th rate ship.
Thus life is good for Lt Ronald Ronault.  He even gets orders to sail.  He is somewhat deflated when they direct him to take a marine major to St Kitts but he is allowed to go free hunting afterwards.

The trip to St Kitts is uneventful.
On the return trip there is a moderate breeze and not a cloud in the sky when the cry "Sail Ho" is heard.  A sail off to larboard!
Ronald orders the English flag aloft.  Soon he sees a French schooner.  He thinks this should be an even fight.  He remains at easy sail in case the Gaul runs. 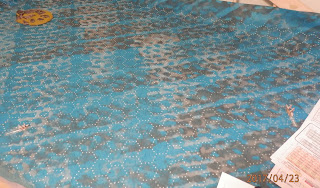 Frenchie to the left, out hero to the right.  Each hex is 50 yards. 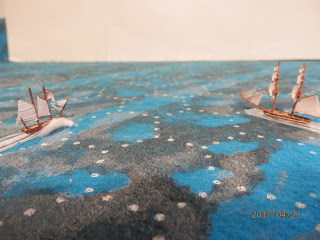 The ships close and Ronald chooses to hold fire.  The Frenchman fires first at 150 yards going for the sails.  Minimal sail damage and several crewman.  His 2LT wants to fire.
Ronald waits, gains the initiative and manages a bow rake with devastating effect. ( Some great die rolls I will admit) 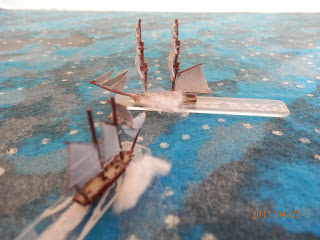 The cannon balls sweep the deck and two thirds of the privateer crew are either dead or broken.  To make matters worse, the sails are sprung and there are not enough crew to make repairs and sail the ship. 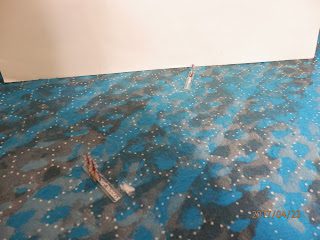 The french captain decides to make a run for it hoping to run off the edge of the ocean.
With his sails sprung and not enough crew to repair them it is just a matter of time before masts  start to fall.  The HMS Beagle follows her prey catching her 40 minutes later.  One more broadside and the Frenchman strikes his colors! 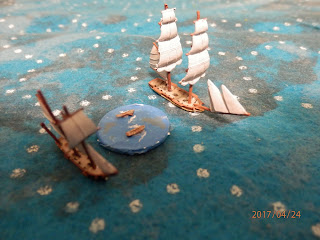 The French captain coming over to surrender.

The Commodore is very pleased with Lt Ronault's triumph.  He gets a "Good Show" with increase in both interest and glory as well as prize money.  I set promotion at "possible" since the french ship was a slight upgrade but he had just gotten a new command.  The Commodore told Ronald that he didn't want to rip him from his new command so soon so would let him enjoy the Beagle for a while.

Great game that played in under an hour.   Wonder what the Beagle's crew will do next?

The world of Lt Ronault and Sails Forward

Spent the last week in St Croix with family.   Had a great time.  Whenever I am in the Caribbean my gaming thoughts turn to pirates and sailing ships.  While on vacation I read A ship of War by Sean Thomas Russell.  They are a series of sailing books with their protagonist Lt Charles Hayden.  They are similar to the Sharpe's series and I like them better than Patrick O'Brian as his lack of punctuation always made his a difficult read for me.
For sailing games I have settled on a set of tactical rules, Post Captain by Old Dominion Games.  They are not designed for big battles but for single ship engagements to several ships a side.  They also work well for unrated ships; perfect!
With no need to work on a set of tactical rules I could turn my thoughts to a campaign system.  Have been playing around with Sails Forward for about a year.  Time to drag it out and have Lt Ronault continue his quest for a Post Captain's position. ( Actually he would settle on an unrated brig right now and moving up several social levels.)  The game is still in flux but what I am going for is you start out as a Master and Commander of a tiny ship.  You are allocated missions and you try to earn promotions by gaining favor with the admiral in charge of your overseas station.  ( It could be the Admiralty in London but I will have to abstract that a bit more.)  A month will be made up of 3 10 day blocks.  You will go out on a mission and then have two blocks with which to do activites such as hunting, clubbing, courting ect.  These will be resolved with die rolls similar to the Forward games.  The object will be to increase your social standing and influence important people.  It has been fun trying different things out and the great thing is, while this concept works for WW II; it is perfect for the age of sail!
So to catch you up with our good Lt.   He is assigned to the Caribbean of course and his is in command of the 10 gun cutter Sea Witch.  His master is Jon Price who is an aggressive family man.  His Bo'sun is the portly Jeff Fishback who has taken a liking to our good Lt.  This is in part due to several parties Reginald has thrown for his officers.  Jeff BTW is a Gr II leader in land battles.  There is a new midshipman aboard, Rob Atkins, who takes the place of Lt Waterman who was recently transferred to the HMS Bulldog as her 4th LT. The HMS Bulldog is a 32 gun frigate and the largest british ship in the islands.  Her captain, Capt Lemmon, is a minor deity in these parts as he is not only a brilliant officer but he actually worked himself up  from the ranks.  [ All this is diced for as per Forward games.]
Lt Ronault has been on 5 missions.  The last one was a brilliant success.  Capt Lemmon asked him to enter a shallow bay to force Jose the Pig out to meet the Bulldog.  Reggie actually boarded and captured Jose!  The Commodore and Capt Lemmon were both very impressed and they both accepted Reginald's invitation to dine aboard the Sea Witch [ they had both turned him down before].  But disaster struck when Reginald showed his mercantile roots and served the wrong after dinner wine.  Curses!  [ That said, Lemmon still likes him.]
How quickly fortune can turn thought Lt Ronault.  3 weeks ago he was the toast of the station then, after a disastrous dinner, the Commodore had said 5 words to him since.  Two of those words " Excuse me" as he went by hadn't made him feel any better. But today he finally got orders to sail.  He was to deliver several diplomatic messages to St Lucia.  That part was disappointing, but he was allowed to free sail on the way back and look for enemies of the crown. 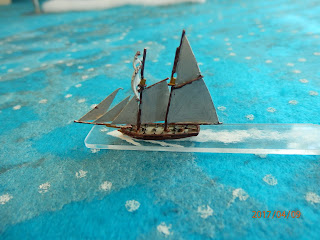 3 days out with a storm off to starboard a sail was sighted ahead. 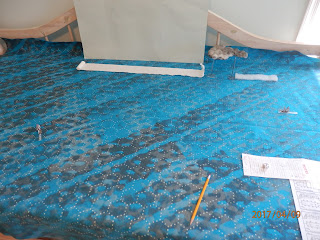 French brig to the left, storm top and Sea Witch to the right.

Lt Ronault ordered no flag flown.  The sails turned out to belong to a french brig ( or a pirate).  They demanded identity.  During this time the Sea Witch hoisted full sails.  The french ship fired a cannon shot demanding recognition and hoisted her own sails.  The race was on!
Post Captain really shows the difference in rigging, particularly in a light breeze so there was little contest.  The brig did get one shot off. 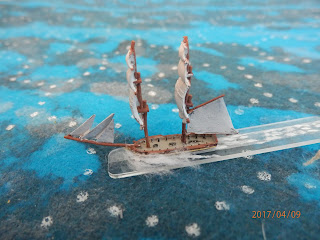 The french brig fires in vain.

A mark of a good game system to me is this encounter took about 35 minutes and even though there was only one shot it was fun.  ( Of course my brilliant background story helped as well.)
A roll of the dice revealed no events on St Lucia so the messages were delivered!  Hunting time!

On the return trip a sail is once again sighted ahead in a moderate breeze.  What flag to fly?  We will go English this time. 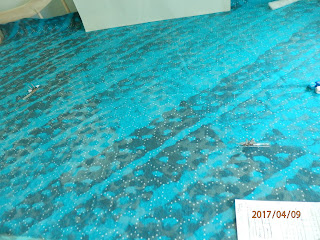 This one turns out to be a french ( or pirate ) 12 gun cutter.  Unfortunately, as soon as it sees the Sea Witch it runs.  So we start a long chase.  We have a average crew and they have a green crew so we have a slight advantage which would be bigger if we were forced to tack.  You check for weather every 30 minutes ( 10 turns )   We manage to get within 800 yards several times but our 6 pounders need a great deal of luck at that range and we are not fortunate.  The weather stays steady for 90 minutes and with real life dinner coming up we give up the chase.  Once again, an exciting game though only 4 shots were fired.

Upon return Lt Ronault gets a "Good Lad" from the Commodore worth 1 glory point but no influence.  He trains his crew on gunnery to no effect and has an uneventful evening at the club.
So that is my introduction to Sails Forward and the world of Lt Reginald Ronault.