Been busy with Jasta Forward.  The scenarios are done and playtested excpet for "Dawn Patrol".  Have the appendix done except for the eastern front.  Not many sources I can find on the air war there.
Have played some Squadron Forward and TW&T as well but been too lazy to take pictures.   Finally took pictures of a Release the Hounds game.   Did not have a Flotilla Forward background as I played three games in a row each with different tweaks to the rules designed to streamline the firering sequence and initative.  This was the most interesting of the three.  I still think the rules are sound; just nibbling at the edges.

Based on intellegence went out to intercept coastal convoy expected at 0100 hrs.  Picked up radar contact of approximately 8 boats moving 10 knots.  Plan was for 289 and 314 to move directly in and 234, 260 to move forward of the convoy and take care of largest escort or proceed to lighters. 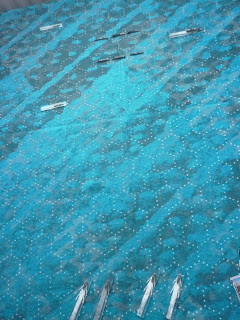 Initial Contact
4 PT boats at bottom
At 2 miles PT 289/314 made visual contact with a Raum boat.  They continued toward the presumed lighters at just under 20 knots but could not identify any.  At just under a mile to the Raum boat Lt(jg) Collins opened up with boat PT boats on the enemy and he returned fire.  At this point both boats proceed at 30 knots towards the lighters eventually identifying them at a mile.  They proceeded to attack. 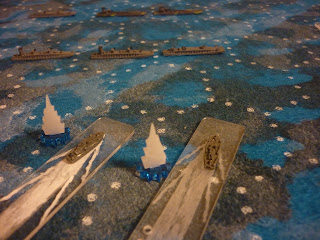 Pt 289/314 attack!
Meanwhile I had proceed with PT 260 towards the forward part of the column identfying an armed trawler at a mile and a half.  By this time the fireworks had started at the lighters and the trawler had increased speed and was turning towards us.  Consequently we could not get a good torpedo solution but raked the trawler with our guns as we passed.  Fire from the trawler started a fire on my ship so I pulled away from the action to fight it and ordered Ens Shaw in PT 260 to attack the lighters. 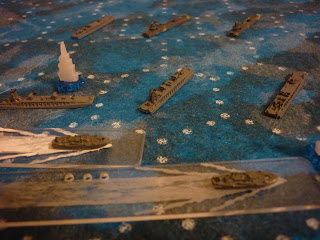 "...fireworks had started at the lighters..." 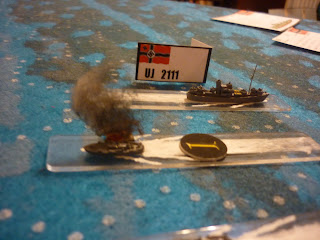 "...raked the trawler with our guns as we passed."
Fire from our PT boats was effective as we damaged 1 lighter, left 1 sinking and on fire and left one damaged and stopped. 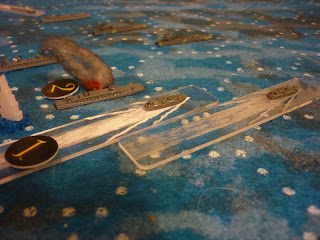 "left 1 {lighter} sinking and on fire..."
Return fire from the raum boats was surprisingly effective and boat 289 was heavily damaged and boat 314 was flooding by the time my crew had the fire out on PT 234.  At this point I ordered all boats to disengage and make for the rally point. 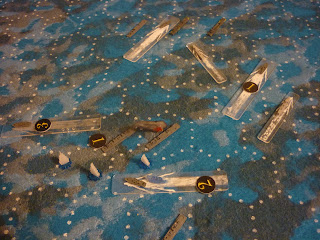 PT 289 middle left.  PT 314 bottom central.
PT 260 sandwiched between 2 raum boats upper right
(All boats take 4 hits to sink)
Lt (jg)   James Clark, USNR
Great game!  I think it is really neat when the biggest gun on the board is a 88mm.  Makes me think I reall have to work on this after Jasta Forward.
Enjoy
Joe﻿

Posted by FlightDoc at 3:07 PM No comments: