Hope everyone is safe.    Work continues to be challenging but is becoming more of a routine.  I actually had a weekend off more or less.  That this is becoming "routine" is both scary and a testament to the human spirit.
One of the things I know about me is I can't stick to one time period or even one type of game.  That is why Platoon Forward works so well for me.  The games are linked but very loosely.  Take my FFL squad in Vietnam.  The last time I gamed with them was two years ago!  [ It didn't seem that long ago.]   I re read my post from March 2018 about Johnny A and I was ready to roll up the next mission.  I wanted to use 2 weasels I had painted up over a year ago.  I rolled up Ambuscale so the die was cast...
After the temple mission things settled down for Johnny and the squad.  It was routine patrolling with occasional contacts.  One of the sites that needed constant vigilance was a forested hill off the main road that supplied the base.  It was within mortar range of the road and the legion needed to ensure the VM didn't set up a post on the hill.  That was Johnny's mission today.   The company had received 2 crabs from depot so those were sent along so test their reliability. 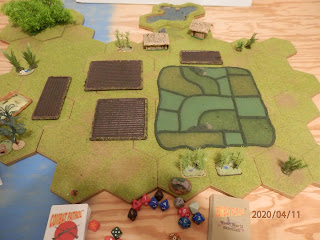 Hill top left.  FFL enter from right.  Road off board to right. 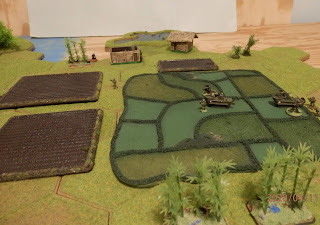 A Walk through the rice.     Point man followed by Hughes, LMG and crab followed by Johnny, crab and rest of squad.  The still, thick air is disturbed by gunfire from the front and right... 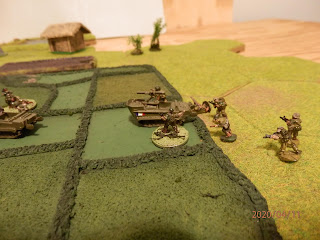 Not a clear picture but Sgt Johnny A and the squad just after the ambush.  1 man down and the entire squad is pinned. 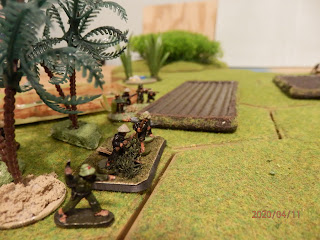 Good time to be local VM.

Johnny crawls through the paddy trying to rally the legion.  Getting anyone to lay down fire and then move towards the right where the 2 buildings are.  Miraculously casualties are light with 2 lightly wounded. 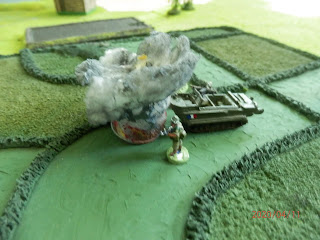 Just when it couldn't get any worse!   An explosion rips Cpl Hughes position.  He yells for the team to move towards the buildings as a second mortar shell finds the range.  Hughes goes down with a fragment in his chest.  A second legionaire also goes down.  1 legionaire [ former point man]  moves towards the buildings.  The last team member and the crew of the crab retreat towards towards jungle. [ The crab is immobilized with an engine hit!] 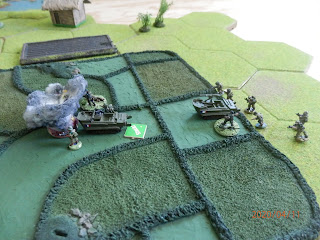 Turn 3      Cpl Hughes team falls apart while Johnny finally rallies those around him. 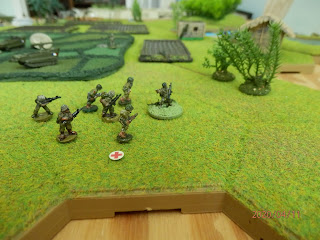 Johnny orders the recoiless rifle to open up on the house while he leads the team towards cover and out of the kill zone.    Once there he realizes Hughes team has ceased to exist; there are several bodies lying in the paddy.  He tells Simone to fire on the buildings and take them if they can.  He is going to the other fireteam.

On his way he is rewarded with... 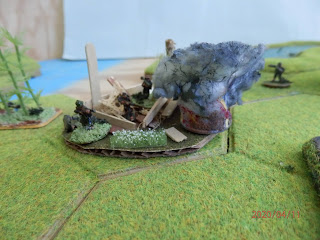 A satisfying explosion as one of the buildings goes up in flames! 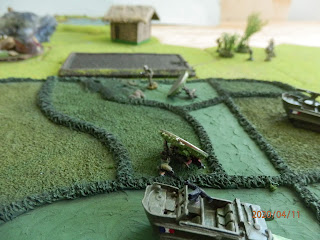 As Johnny reaches the pointman he is hit and goes down!   Fortunately it is just a flesh wound. 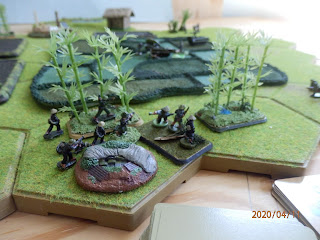 Unfortunately Johnny is not the only one who has noticed the Legion's plight in the middle of the board.  Leaving the LMG at the top of the ambush the LT moves his squad through a tunnel into bamboo near both Cpl Hughes [ status unknown. In FoF you don't roll for wound status until you have a upright soldier there to check status.] and our 3 panicked legionaries hiding 40 yards away. 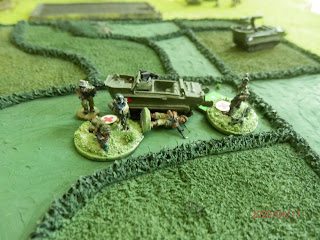 Sgt Anderson reaches Cpl Hughes along with the pointman.  Cpl Hughes is badly hurt.  The LMG team are lightly wounded and can still manage the LMG with a negative modifier.  The recoiless rifle has silenced the VM LMG in the meantime and Simone has taken what is left of the 2 buildings.   [ The VM panicked and left after the hooch blew up.] 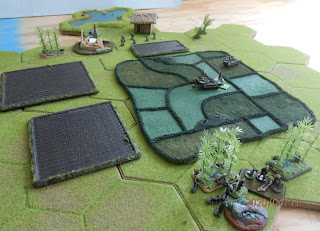 Johnny begins to take fire from the bamboo and starts to return fire.  It is a stalemate until the recoiless rifle pivots and throws 2 rockets into the trees.  With that the VM call it a day and withdraw.

A really fun, short battle that felt like a nailbiter up until the very end.  I really thought Cpl Hughes and then Johnny was going to get overrun.

Post battle 3 bodies were found in the destroyed hooch.  The squad sustained 3 lightly wounded and and Cpl Hughes who was transferred to a hospital in Saigon. Johnny never saw him again but heard he lived after several operations and was medically discharged from the Legion.  Though it didn't "sing" in french everytime he saw this hill... 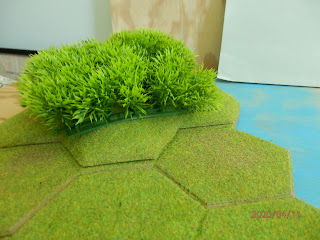 he referred to it as "Hughes Hill" in honor of his friend.