Holiday greetings.   Am building a schooner for Post Captain but have also been engaged in my Down in Flames/ Bag the Hun mash up.  It has been going so well that I thought it was time to try it with Squadron Forward.     I did purchase the latest version to DIF and it is a good one.  Dan did what he set out to do, make a light, quick dogfight game that is fun.  Of course my goal so I changed some things.   Wingman have been beefed up considerably and I tweaked the stats as well.  Lastly it was now TOO easy to maneuver so that had to be toned down.    I am not suggesting these tweaks for everyone, only those people with obsessive disorders.  Anyway on to Malta...

As you may be aware Malta was pounded by the Axis for several years.  It had more bombs dropped on it than London.  King George bestowed his cross on the entire island for bravery; it is on their flag to this day.  My Spitfire squadron there has had 3 battles with mixed results.  They lost their CO on the first mission.  They finally have a new CO in from Egypt.  On his second day the alarm sounds as a german raid has been picked up...  [ I roll up intercept and it is JU-88s with ME 109Fs]

Sgt Randell      Cocky/family       Vet with 1 kill on Malta    Flying demon   +1 performance.  disliked by the squadron because he was Sdr Ldr Landry's wingman and they blame him for the CO's POW status.

I roll up 3 ME 109s but at least they are out of position.  The brits only get to go first with no other advantage.  Sdr Ldr Lynch didn't line the boys up well I guess.  The plan is for Lynch, Bullet and Randell to go after the bombers while Barnes and Towson kept the 3 fighters busy.   We will see how this works out... 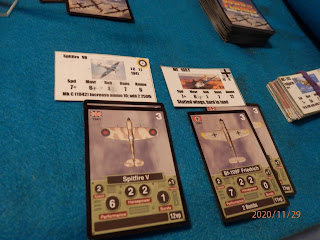 My BTH cards and new DIF cards.   My mods to the DIF cards are both fighters have horsepower of 3/2 and both are spritely which cancels out except at high altitude.  There the ME 109F drops to average so the spits have a slight advantage.  Note the germans begin at high altitude as noted on the stands. 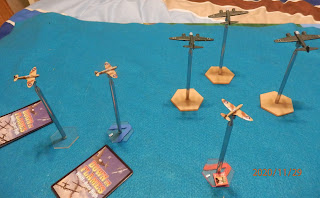 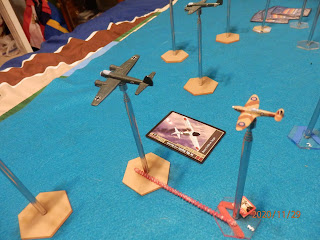 Gets in very close and lets loose.   The bomber's wing is shredded but Randell develops a leak in his petrol tank.  It is a wash; both planes are damaged enough to abort and leave the battle. 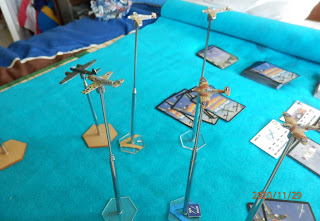 Meanwhile above the bombers Flt Lt Barnes picks out a lone ME 109.  He fires and the plane spins out of control.  As he is celebrating his victory the german comes out of the spin about 8K ft below.  Rats. 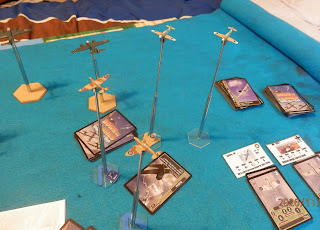 Now alerted 2 jerries close in on Barnes.  Just to show my improved wingmen I will go through this sequence of play exactly how it happened.  If you don't care skip down 4 pictures.   The german plays a manuver card to get advantage over Barnes. 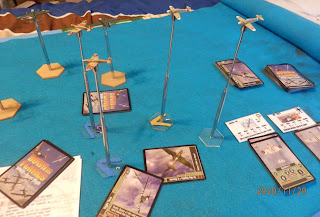 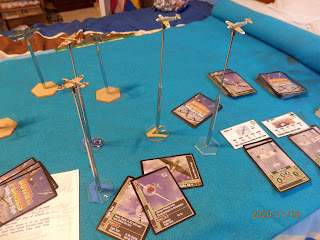 The german is a veteran and cuts through with a scissors. 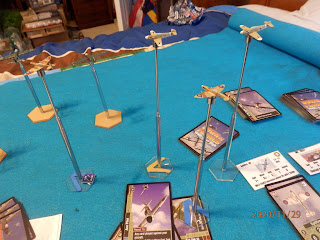 Sgt Towson being a good wingman step in and drives Jerry off with an ace card.   Good Show! 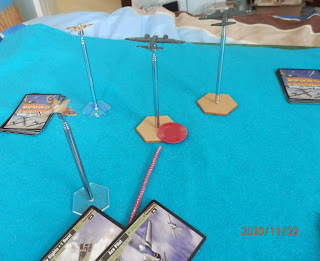 second of 4 turns and Lynch and Bullet continue to hammer at the bombers.  Bullet doesn't know but he kills the lower gunner on the JU-88. 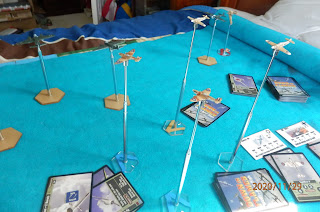 FltLt Barnes continues to tie up the german fighters... 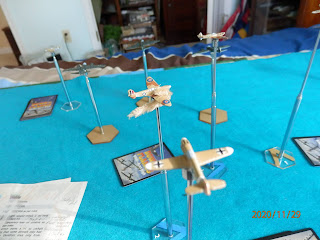 A german hits Sgt Towson in the petrol tank.  He has to leave the battle space as well. 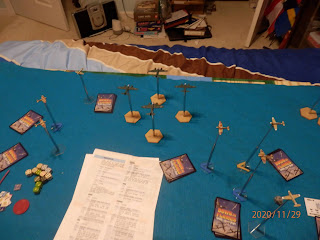 End of turn 3.   A second JU-88 has aborted.  The spinning ME 109F is righted and ready to engage Sdr Ldr Lynch top left.  FltLt. Barnes appears in trouble up high and to the right with a ME 109 behind him looking for a firering position while Towson radios that he has to leave with petrol streaming from his plane. 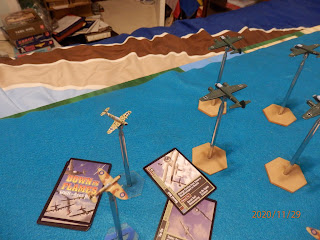 As Lynch tries to line up a shot at the bomber the ME 109 gets in the way! 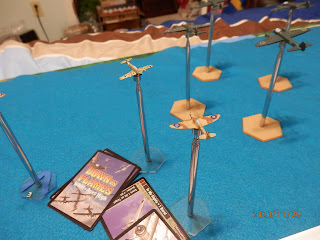 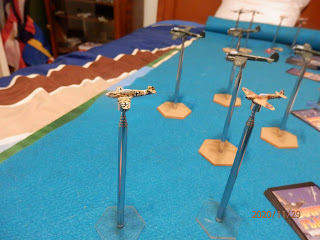 And manages to get on the tail of the unlucky Jerry. 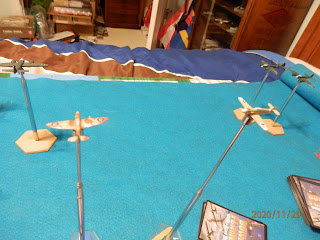 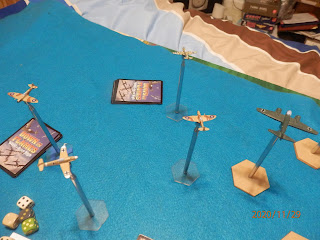 Unfortunately the german being tailed radios for help.  The high german wingman had already lost wingman status but stayed to help his boss.  Now with a squadron mate in trouble he dives down to help... 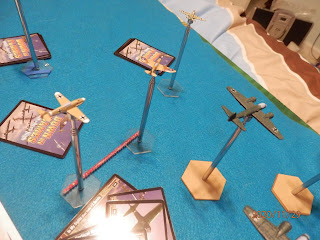 Lynch turns to see the German and calls out for Bullet to break but it is too late.  The german fires... 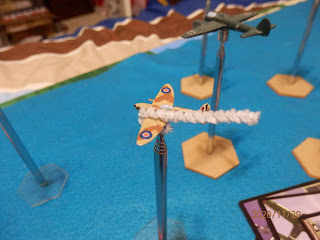 Bullet's engine starts to sputter.  No way he is going to make it back to base.  Time to hit the silk. 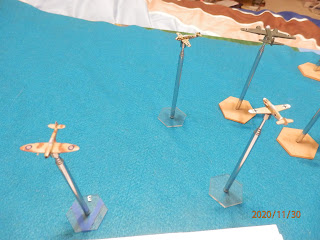 With Sdr Ldr Lynch at medium with 2 german fighters and Flt Lt Barnes high with 1 it is time to go.  Sdr Ldr tells Barnes they have done what they could.  Head for home.   They make it successfully.

Great fun that played in just over an hour.  4 bombers went over the port but bombed poorly doing very light damage.  For the germans 2 bombers were damaged and returned to base.  [ one wrecked on landing but the squadron doesn't know that.]   The spitfires lost one and had 2 damaged.  Both Sgt Towson and Randell made it back to base with minimal damage.  F/O Bullet Skeel successfully bailed out but was not found by air/sea rescue.  [ 20% chance that.]  His body washed up 5 days later. RIP. Clearly this was a loss for the squadron and not an auspicious start for Lynch.

Post battle Sgt Towson tells off the intel officer [ Lt Reed] during debrief.  Sdr Cdr Lynch takes Reed's side so now the enlisted aren't fond of their new CO.  On a positive note a replacement spitfire shows up so the squadron has 6 plus 1 in maintenance.     We will see how long Lynch sticks around.

I really enjoy the mashup of DIF using the combat results of BTH.  It plays quicker with plenty of chrome for me.