I have been looking for a good set of AoS rules for several years now.  The best I have found is Beat to Quarters but you could not fire at rigging.  I tried to fix this but it left me flat.  (That said, the rules are free so you should check them out.)  Along comes Post Captain which focuses on a small number of ships per side so it seemed to be a good risk.   I shelled out the $40 bucks.   This is my second game.
1812 off the Coast of New England
Sean McKinney spent 8 years as a midshipman in the King's Navy while trying to pass the Lieutenants exam.  He finally realized God was calling him to a less violent life. Thus he became (through a family friend)a merchant captain.  Still, he never lost site of the fact that he had been a military man and actually trained his crews on cannon fire.
One day out of Providence the lookout on the John Hale sights a sail moving quickly in there direction. 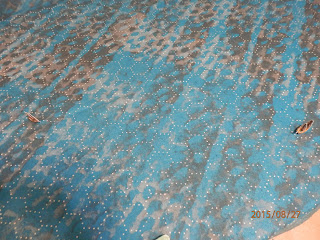 John Hale on the right.   Each hex is 50 yards though the game does not use hexes.

McKinney determines that the ship is a privateer and opens fire as she is reefing her sails. 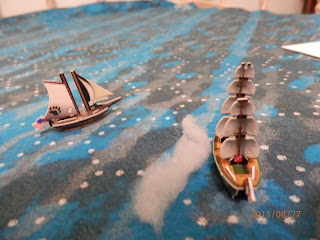 ( there are three types of sail from full to battle.  Each game turn is divided into 3 phases of a minute a piece.  This allows ships to move and have some ability to react without requiring written orders.  I really like this though Beat To Quarters had it first.  If ships are loaded they can fire at anytime during the turn.  Each nation takes a different number of phases to reload.  Thus the USN and RN will fire more frequently.  You CAN fire at sails and can actually take down individual parts.  At first this seemed daunting but by my second game it flowed and I really like the detail.  All charts are D12 based for some reason.  I changed the combat chart to D6s without much trouble though so I can roll my country specific dice!  )

The Sandpiper lost her jib due to the John Hale's fire.  but still manage to come around for a stern rake. 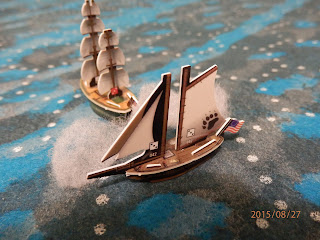 The damage report back to Captain McKinney showed damaged spars, mild hull damage and several crew members down.   McKinney quickly sent his men aloft to work on the sails.
(Where to place your crew becomes a decision in this game.  With almost any casualties at all you will not be able to load your guns, repair sails and hulls so you have to make tough decisions. )
Captain McKinney continued to fire but his 6 pounders were just outgunned by the privateers 12 pounders.  He was contiplating his hull damage when his thoughts were interrupted by a tremendous crash!  His mainmast had come crashing down. 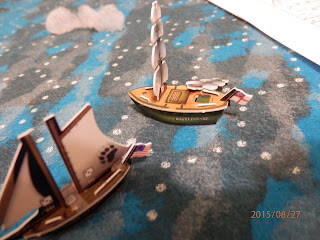 The John Hale without a mainmast.     Embarrassing for the privateer he has failed his tack and fallen off.  ( In his defense he has lost his jib.)
(Tacking is relatively detailed but takes into account square sail vrs fore and aft and even allows variability for "crank" and "weatherly" ships.)

With his mainmast lost Capt McKinney signaled for the colors to be lowered.  How he wished he had been in a Man-O-War!

I really enjoyed this game.  It flowed much smoother the second time and only took an hour to play.  This game has the most detail of any game Aos game I have played but it flows along better than most including KMH and WSIM.  I could see you would be limited to several ships per side.  There are optional rules for everything under the sun rivaling Command at Sea in completeness. There is day/ night/ marines/ tides/ towers/ boats/ boarding and the list goes on.    So far I am very impressed! 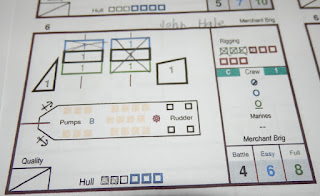 John Hale's card at the end.  Laid out very logically and informative.  Ships check for morale after loosing only a third of their hull strength. For non merchantmen will probably change that.

I continue my pirate adventures as well.  I attempted Donnybrook again but think I will go back to Sagabrook.
Photos below: 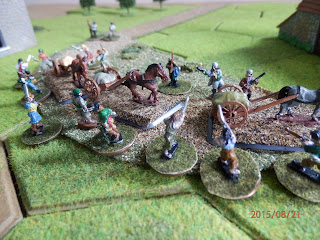 Smugglers along the Wash load items that have not been taxed! 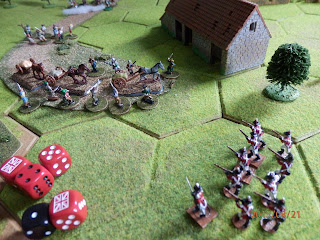 Royal Marines show up.  Can also see my country (and era specific dice!) 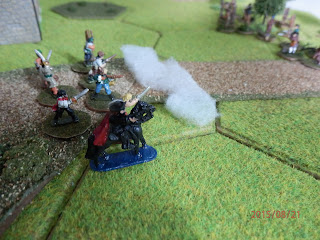 "Honest John" Slade is the ringleader and he shows up with his best men. 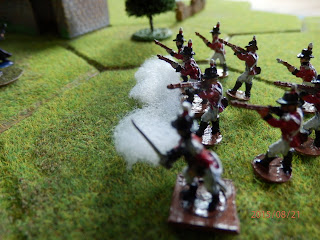 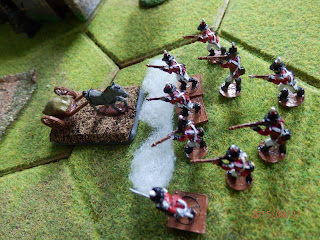 The marines recover one wagon.  Now it can be taxed and our salaries paid!!! 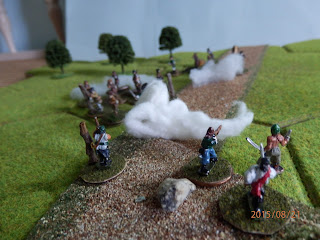 Other smugglers hold off local militia.  ( not that hard really.) 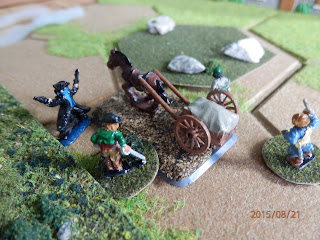 One wagon makes it off the table!


Posted by FlightDoc at 5:27 PM No comments: