Patrol along the Kokoda Trail

This is the 3rd battle with my aussie platoon. Lt "Pinky" Seibert was wounded last battle and has not been replaced. He will miss 2 battles. This platoon has poor leadership with 2 Gr I leaders and the platoon sgt a gr II [McDonnel] who was just promoted to Sgt after last battle. The company commander has decided to send the Sergant Major out with 2 sections on a combat patrol.

Sergant Major, your map is below. You start at the bottom edge and must recce the whole board. Come up with your route and order of march. You have 2 sections plus a 2in mortar.
See what the Japs are up too and good God man, be careful!
Characters:
Sgt Maj Peters Gr IV
Cpl Tommy Higgins 1st section Gr I
Cpl Jeffrey Stokes 2nd section Gr I hesitant commander

Sgt Major decided to start along the left of the board, skiriting the jungle and make a clockwise circle of the board going around the rocky hill. 2nd section would lead and when contact was made he would move up to help Stokes who was the weaker of the 2 weak leaders. 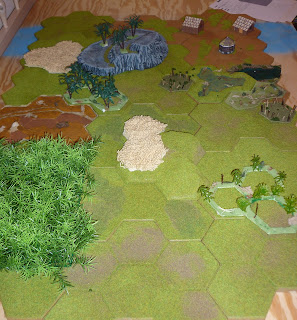 Map depression is left and
rocky hill is left center
Cpl Higgins was glad to be on a mission with the Sergant Major. Hopefully he would see what an idiot Stokes was and how deserving he himself was of another stripe. Higgins was sadden when 3rd section's Cpl McDonnel was promoted to platoon Sgt. McDonnel was good, just not as good as himself. He was out to prove it to the Sergant Major today.
Unfortunalty for our heros, the japanese [also on patrol] saw them first and moved to set up an ambush... 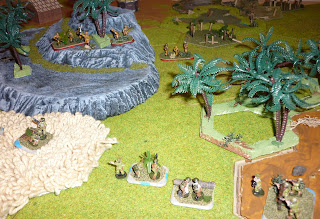 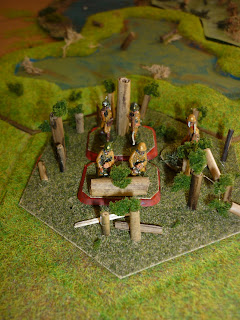 Japanese knee mortars in
my version of bamboo 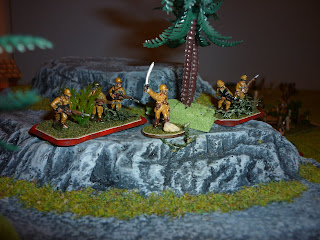 Japanese squad on hill
Higgins got his folks into the jungle and started firing at advancing infantry. Unfortunatly a LMG from the hill and mortars pounded his position and the men waivered.
Meanwhile a second LMG opened up on first section from the hill. 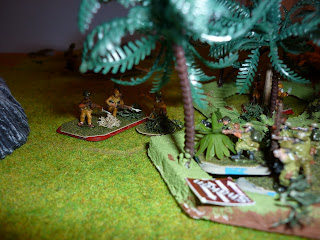 Japanese advance on Cpl Higgins
Cpl Higgins had to pull back into a depression before they were overun!! Why wouldn't these bastards rally!!!! [ It is tough to be a Gr I leader]
Meanwhile, 2nd section had pinned the LMG on the hill. Sgt Maj screamed, up and at em boys! 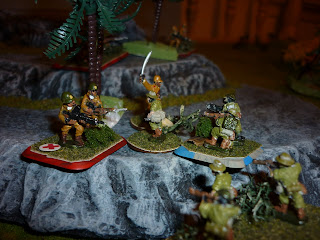 Up and at em boys!
The aussies took out the LMG but before they did a final burst caught 2 men in the stomachs. Sgt Maj Peters hit the ground knowing it was bad. An IV was started; he refused morphine knowing he was the only competent leader but then he lapsed into uncounsouness. Cpl Stokes was at a loss at what to do next. [The hesitant commander card came up at the worst times] They had lost 4 of the section taking out the LMG. There was still a jap squad on the hill. They traded shots and even repeled an assault. Stokes could not get them rallied to charge and could not un hesitate enough to have them retreat. 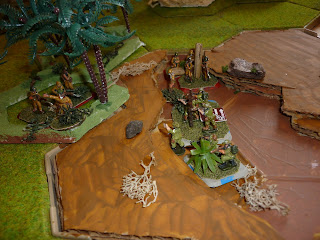 Cpl Higgins in the depression
Meanwhile, Cpl Higgins could not get his section to rally! The japanese gathered for another charge. 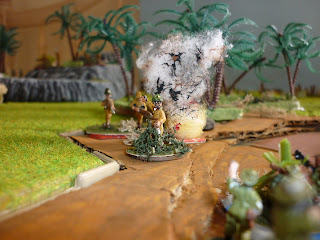 The final charge
2in mortar shells try to halt the advance
12 Japanese led by a sword wielding NCO moved into the depression.Cpl Higgins managed to get extricate his folks without losing a man. He then went back and picked up the the 2in mortar and quitely snuck away.
Casualty wise it was a closer battle with the aussies sustaining 14 and the Japanese 8. Clearly the Aussies were driven from the field. With 2 poor leaders they could not rally their folks. 2nd section finally got away when Cpl Stokes was wounded. Had the Sgt Maj not been wounded it might have proved a very differnet game.
Japanese forces:
1 gr III leader 1 gr II leader 1 gr I leader
2 squads with LMGs
1 knee mortar squad [3 mortars and 6 riflemen]
Enter north edge of board on patrol Randomly determine edge and turn of entry
Cpl Higgins was unsuccessful in having Cpl Stokes removed from the platoon and he had a 50/50 chance of becoming a Gr II leader and missed. Sgt Major Peters lived but was invalided home to australia. The new Sgt Major is Joe Cook and he already dislikes the platoon. Lt Seibert is working at battalion was convilesing and had done some good stuff for the company that has earned the gratitute of the company commander. Cpl Stokes is out for 2 battles and Pvt Collins will have the section Gr I no hesitant commander card.
Can Sgt McDonnel whip these guys into shape? Will Cpl Higgins ever earn his Gr II?
Enjoy
Joe


Posted by FlightDoc at 6:48 PM No comments:

Traded in my playtest copy of Bag The Hun II for the final. Great artwork and some inspiring rules! Rivet counters won't like them but they reward good tactics and show why a veteran pilot is always dangerous. Needless to say did not play Platoon Forward this week but a bit a good news on that front. Rich of Too Fat Lardies has agreed to pubish it and stated he will do so right after he finishes Charlie Don't Surf. I expect to see it this summer. Soon you will be inspiring me with your tales of heroics!!

Still tinkering with Squadron Forward and my Romanian Air Force...
Adj Sef Ionescu had been in the AAR for 9 years and had finally wrangled a combat assignment when his friend (wingman) was posted as the wing commander of a fighter base at the start of the war to rid the world of Communism. If you read the last post you will remember the escadrille was down to 4 planes. The mission assignment today was a fighter sweep. Lt Macri would lead the mission along with the flight sergeant. The 2 wingmen would be Adj Stag Toma and Adj Baciu.
Characters:
Lt Marci Plesant
Adj Sef Ionescu Cultured Veteran pilot
Adj Stag Toma obnoxious
Adj Baciu cunning 1 kill

Shortly after takeoff Lt Macri had engine trouble and had to abort. (random event) There was discussion of cancelling the mission but Ionescu felt strongly that they should at least stay over Romanian lines and protect the troops. He was spoiling for a fight! 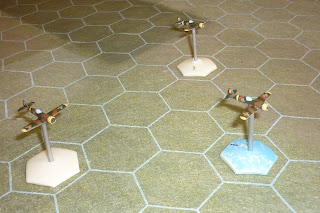 3 IAR-80s in a loose "V"
The blue stand denotes veteran pilot
(You can get away with that solitaire!)
"Bandits 4 o'clock low" Toma calls out. Obnoxious on the ground, Toma was a fine wingman in the air and his eyesight had prevented a bounce today! 5 I-16s. Ionescu pulled the V around right and allowed Baciu to detach as the battle was joined! (Toma had complained that he was senior but in the air performace counted and Baciu had downed a plane.) 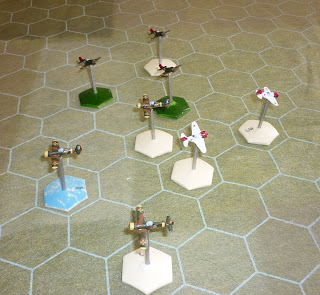 The battle is joined
A swirling dogfight ensued with the IARs using their speed to accelerate out of trouble when needed. Toma Lost Ionescu early on (on purpose?) as Ionescu dove and quickly turned hard to port to get on the tail of an apparently lost (sprog) I-16. As his machine guns rattled he saw hits in the cockpit of the small fighter. [ Using a modified version of my damage table that appeared in a Lardie Special a while back; the I-16 had back seat armor which turned the damage roll from a temporary loss of control to a cockpit glass smashed result; curses!] The startled pilot throttled down, flipped the agile rata into a left turn that Ionescu could not quite follow. He lost airspeed pulling Gs and dropped a level of altitude to aviod a stall.
Meanwhile... 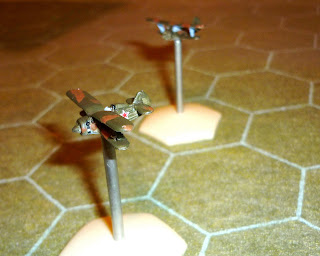 A random reinforcement brings 3 more russian aircraft into the battle. 3 against 8! Baciu is quickly shot down but bails out unharmed. Adj Sef has seen enough. He tells Toma they have to retreat!! 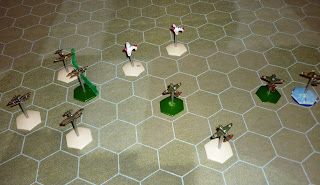 Sound retreat! Toma on the tail of a I-153 upper left
Adj Sef Ionescu swinging wide of his prey middle right
Adj Stag Toma pulls the trigger as the I-153 fills his sights. He sees hits on the engine and then the plane explodes in a ball of fire! Joyously he dives for the deck and heads for home. Adj Sef thinks, "There will be no living with him after this."
Enjoy
Joe