ULT Volstadt's race for the bridge

Last weekend I set up a game and played; big step for me.  We had looked at some old family photos of a trip we had taken to Berlin back in 1987 so of course that fired me up for a cold war battle.
I used my 1st platoon of the 7th Motorized Schutzen aka " Max Roscher".   They are East German which is different.  This is my 4th battle but the first time I have ever posted with these guys.  They have won most of their battles but the first squad has done poorly every time.  ULT Volstadt had threatened to replace their NCO when he had conveniently gotten KIA during a patrol to a factory.  That dropped the squad morale and he wasn't replaced.  The squad is now undermanned and led by Gefreiter Elbaum.  Volstadt is evil [ not taking sides here I just rolled it up!] and this war has been inconvenient so far but might help his progression either up the ranks or politically after the war if he can get his platoon to do what he wants.   Lets check in with this interesting unit...
Characters
ULT Volstadt  son of a govt official    evil/ hedonism        Avg ldr
1st squad  Gef Elbaum       temporary                                poor  morale of squad  poor  8/6 for FoF
2nd squad  Unteroffizer  Rossic  son of disgraced official   Volstad constantly questions his loyalty to the state.  Therefore he feels he must be twice as good as everyone else.   conformist/ technology  Avg leader which for Warsaw pact NCO is good.    morale  of squad avg   8/8 for FoF
1 BDRM
4 T-55s

Volstadt didn't mind the war but it had surprised him.  Did the Russians really think they could win?  He hoped so.  Being in a front line combat unit could certainly do him well as long as his unit didn't screw up this chance for him.  Either climbing in the military or back in the party would be fine with him and his father would certainly help where he could.  His unit was made up of dolts primarily; Rossic had some potential but the rest were sheep who wouldn't even get out of the rain.

He had a chance today to score some points with his CO Maj Kettler.  Kettler had been a problem up till now as he wasn't a political type.  " I don't care who your papa is.  I need you to be a good infantry officer and train your platoon!"
Well the company had been held in reserve and a small breakthrough had occurred.  Each platoon was to be sent through the breach to secure an objective!    Now was his time to shine.   He was to secure a bridge on the outskirts of the town of Lemm.  The situation was fluid and resistance was expected to be minimal so no artillery or air was allotted.   [ I rolled up the scenario Explotation and failed rolls for artillery and air.  I made the rolls for armor automatic. ] 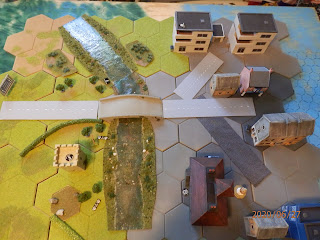 The village of Lemm to the right.  1st platoon enters from the town.  I decreased the number of "As" and "Cs" by 1 to reflect NATO fighting outnumbered. 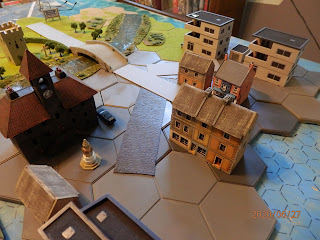 I really enjoyed setting up the town! 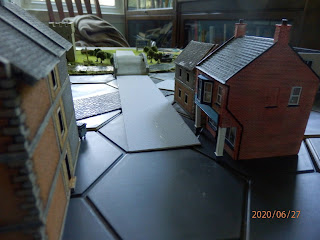 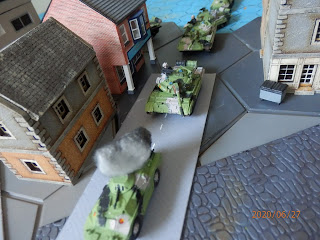 The East German's order of march was BDRM 60 yards to the front followed by 4 tanks then 2 BTR-60s, 1 AA unit and the last BTR-60.
A shot range out as the BDRM neared the bridge.  "Nuts" thought Volstadt. this isn't going to be as easy as I hoped.   2 Tanks moved forward as 2 tanks swung right. 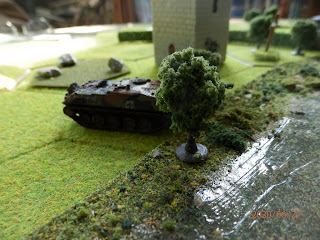 A throwback to an earlier time...    A German panzer lies in ambush.   It took out the BDRM. 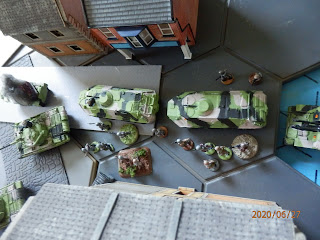 The battle starts in earnest.   the 2 tanks engage the jadgpanzer while ULT Volstadt [brown square base] unloads his first 2 squads.  His sends 1st squad to the Rathaus to support a crossing and prepares his second squad to rush the bridge on foot.  [ Volstadt is not a man to lead from the front unless the Maj is watching.] 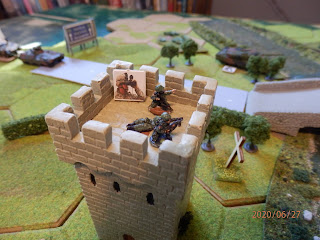 A MMG team opens up on first squad from a midevil tower.  The marker shows they are on overwatch.
The Shika AA unit quickly sends them downstairs.  { West Germans had UNLIKELY chance of air support and missed their rolls as well.  In retrospect should have made that POSSIBLE to LIKELY.} 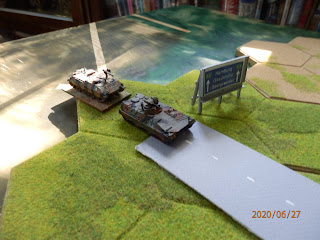 West Germans get their scenario driven reinforcements; 1 infantry squad and a Jaguar!  Sigh... 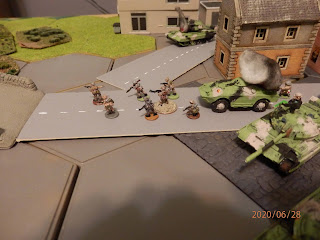 As the T-55s tangle with the jadgpanzer,  UO Rossi leads the way to the bridge.   ULT Volstadt has the medic standing by the back of the BDRM in case this wasn't his best decision.  He still has 3rd squad in their BTR.  They make it with no problem. 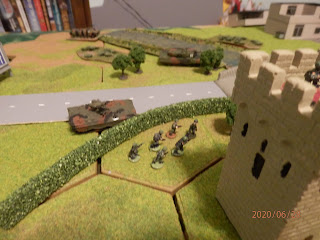 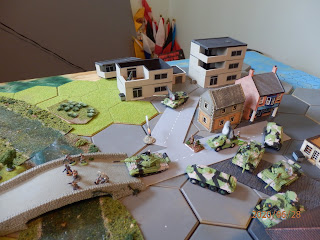 UO Rossi creeping along the bridge as the tanks start to follow.    Just then a tank hunter team arises from an apartment and fires a panzerfaust at the lead tank...    It is too high.    Our friendly AA gun keeps the heads of the team down while Volstadt goes and tells 1st squad to root them out. 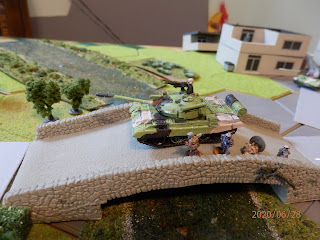 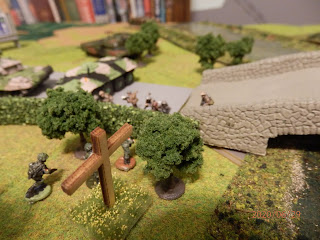 Somethings never change.  On a spot where 400 years earlier men fought over political ideals brave men once again come face to face with each other in anger. 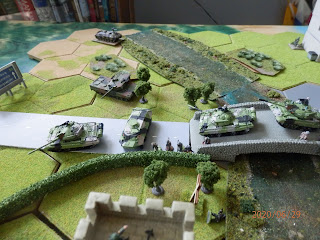 Meanwhile, while FOF is not a tank game we have quite a parking lot all of a sudden on the west bank.  Everyone is missing everyone else; unusual. 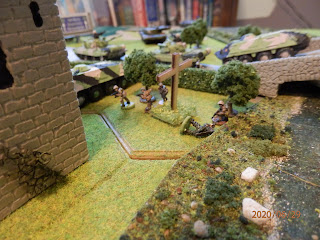 As the tanks waste a lot of ammo Rossi's men prevail in the garden and advance very cautiously.  [ In FOF warsaw pact NCOs will not advance unless in direct line of sight of their officer.]
The West Germans rally in the tower and then retreat. 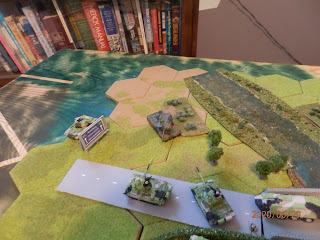 The Leopard, facing 3 T-55s decides to retreat also.  It manages to destroy all 3 on the way out! 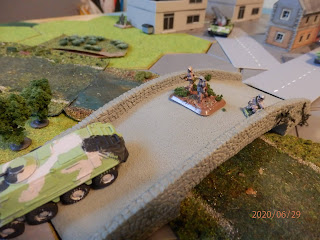 As the fighting dwindles ULT Volstadt crosses the bridge triumphantly!

Fun battle that was bittersweat because I couldn't share it with my dad.    It should have been closer than it was but I misplaced the Leopard on set up.    I should have switched it with the jadgpanzer and given it more LOS over the board.
Post battle Maj Kettler is impressed but not enough to promote Volstadt.  He and Rossi also miss their leadership roles to improve.  Interestingly, 2nd squad does not grow any closer to Rossi even though he is doing a great job.    Volstadt does meet the battalion S-4 Maj Rother and thinks he impresses him with his tale of the battle.  Actually Rother pegs Volstadt correctly as self serving but is politically astute enough to see which way the wind blows.  A new NCO is assigned to the platoon for first squad, Unteroffizer Weiler and they are brought up to full strength.   Hopefully that will help morale.  [ it didn't]
Will Volstadt climb the ladder or be found out?
Will Weiler rally first squad?
Will Rossi take 2nd squad to the next level and continue to be the rock of the platoon?

we will have to wait and see my friends