Have been doing a little bit of everything the last couple of weeks.  Have actually abandoned WW II Donnybrooke and gone back to Lazy TWAT as my tactical rules.   Years ago Chris  had an article about the French invasion of Germany in 1939 in a Lardie special.   I have always enjoyed that article as it taught me about a campaign I knew nothing about.  So when I rolled up a new French platoon (using parts of Grunts Forward) I decided I would let them go on the offensive!
First the platoon
Lt Tulasne  Son of a university Proffessor from Lyon.  Professional soldier who is pleseant and cares about his family.  Gr I leader and +1 as he is just a nice guy.
Sgt LeGloan  Son of a police officer in a Norman town.  Has seen how it works "in the real world" and is corrupt but believes in France.  Gr I leader
Sgt Lemare  Son of a farmer so grew up on a farm with nothing.  Joined the army to escape poverty.  He is cheap and lives for money.  Gr O leader
Sgt Mandon Son of a villiage Preacher from Alsace Had a choice between the ministry and the military and joined the army.  Still a bit scholarly for an NCO and loves his country.  Is hesitant in combat.  Gr O

So you can see that the new tables really bring more background out in the characters.

Capt Mural started speaking to all the assembled platoon commanders.  " Today, for the honor of France, we will take the first of many German cities.  Today we conquer Neukirchen!"  (Scenario is Company attack" 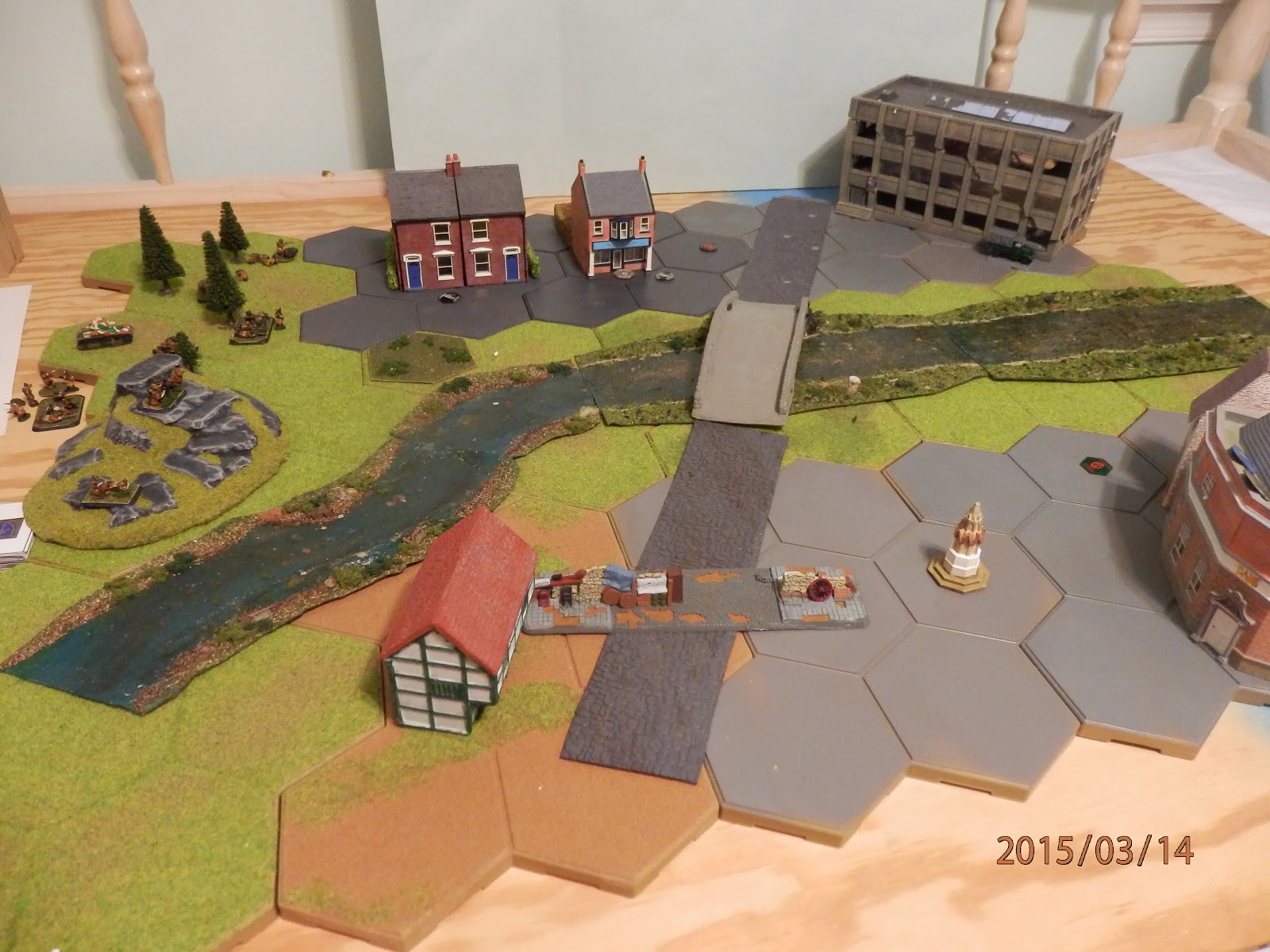 French enter the town from the left.   Must secure the bridge across the river. 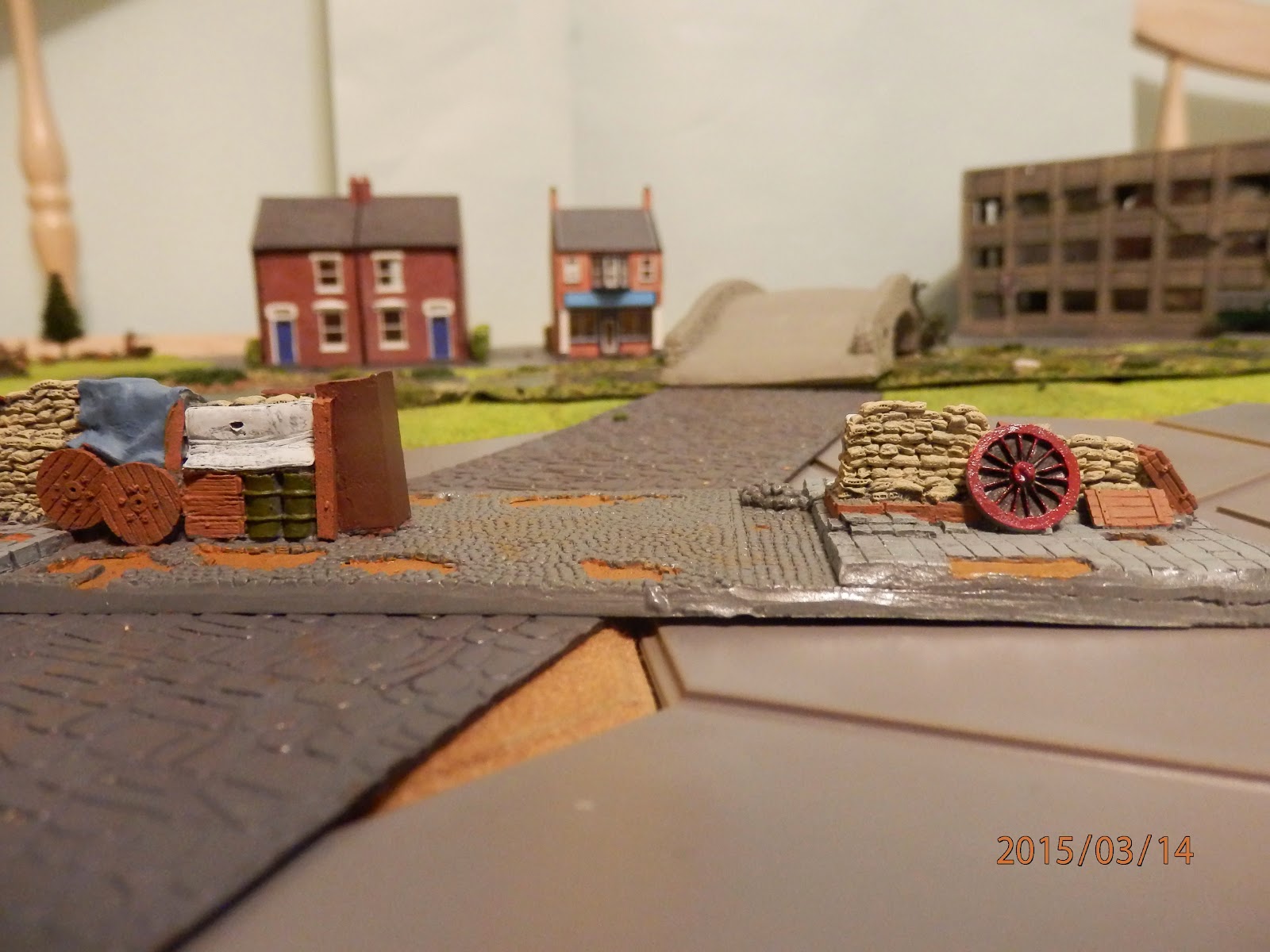 Another look at the bridge

The plan was to have the MMG and MTR scale the hill to provide supporting fire.  First squad would take the first three houses.  Third squad would try the open ground along the river and make for the bridge.  Second squad was held in reserve.  The tank would try to suppress positions as needed.

When all the dummies were rolled up they had infantry in the houses and warehouse with support elements across the river at the bank.  ( I hate when the system is smarter than me!)
Third suad quickly got stuck.  Sgt LeGloan's first did well through the first house.  (These Germans had low morale.  All the  good troops being in Poland.) 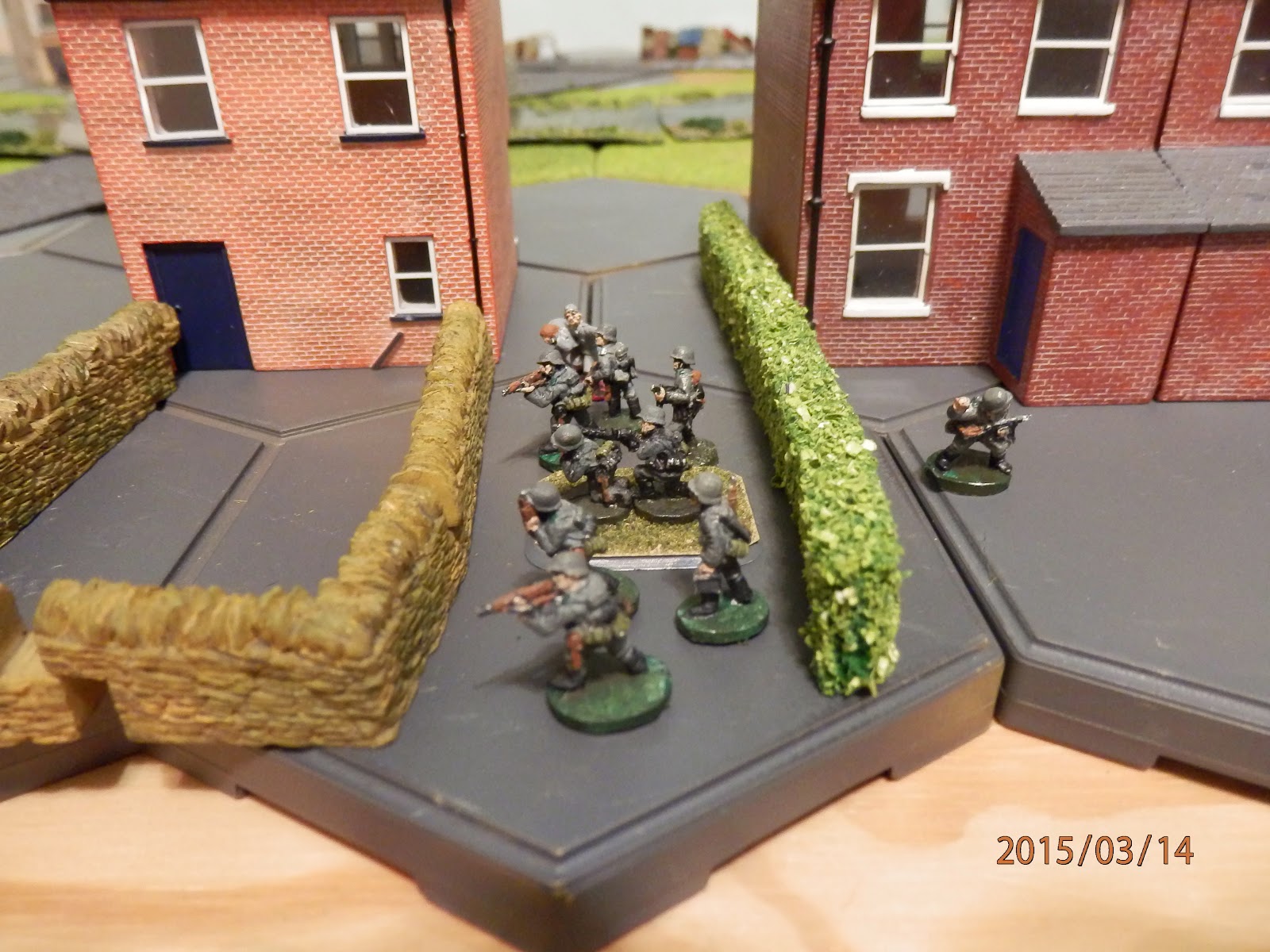 Germans retreat from the first house. 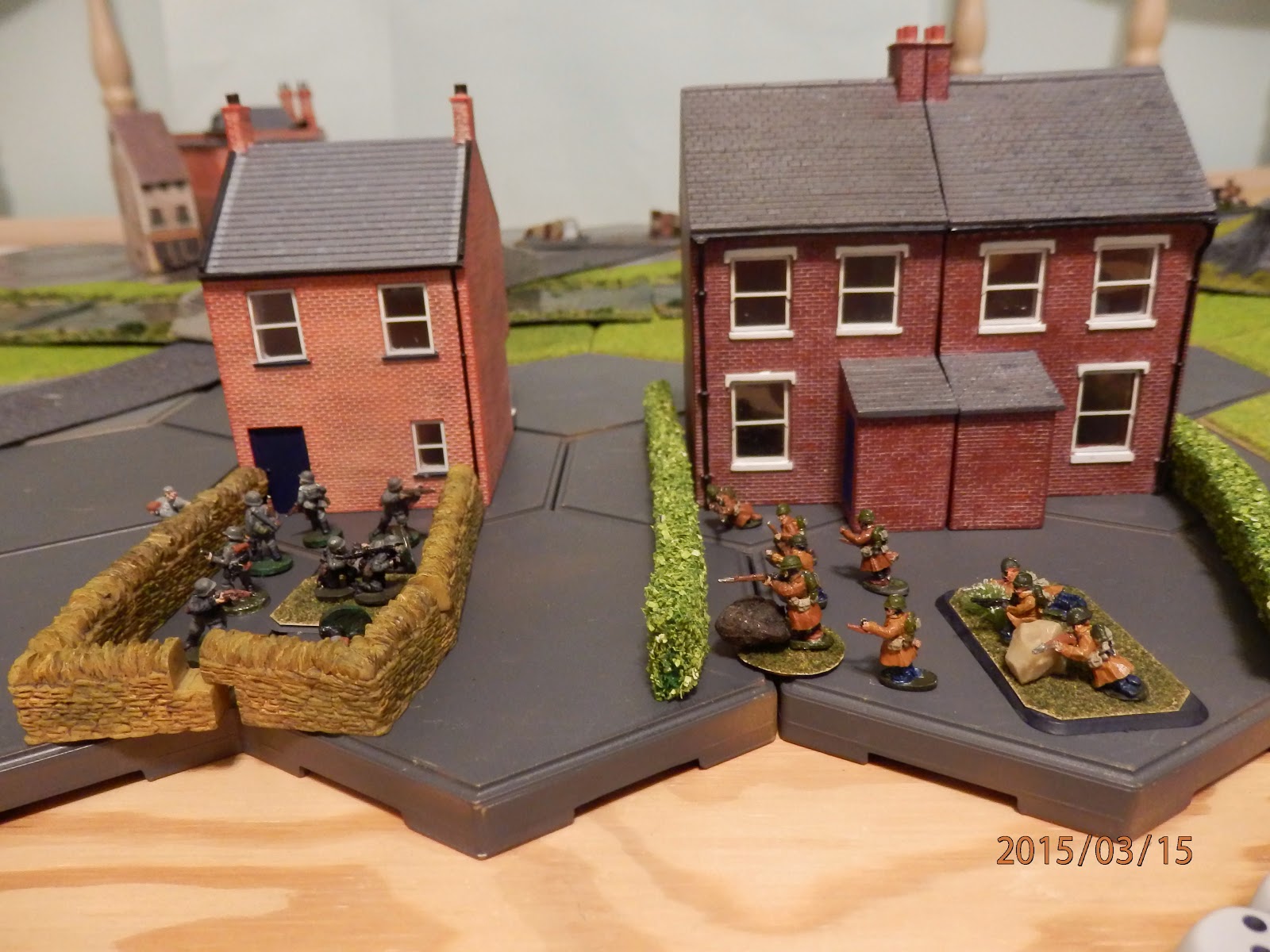 Sgt LeGloan's squad battle it out in the gardens ( or backyards for our US readers.) 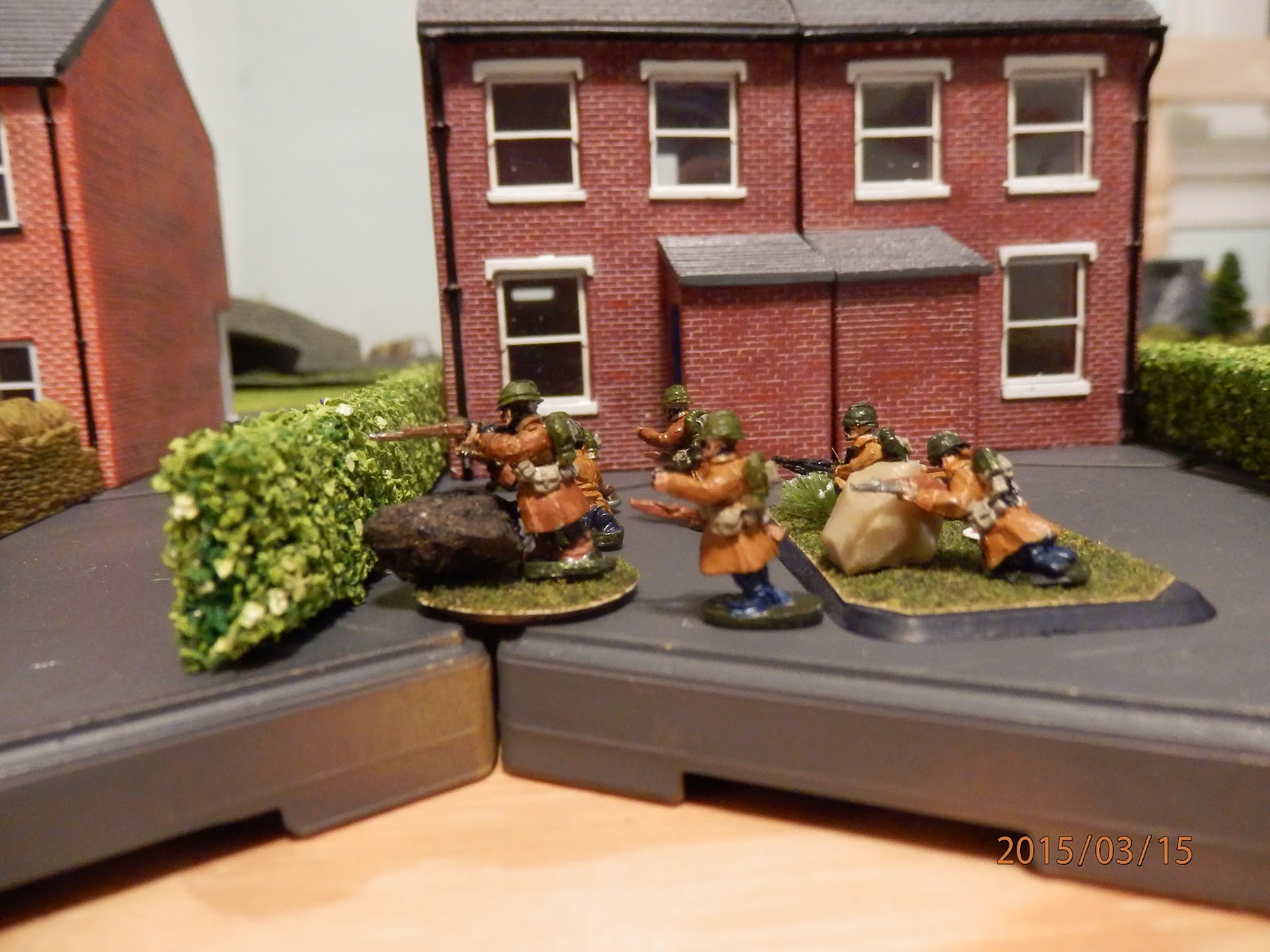 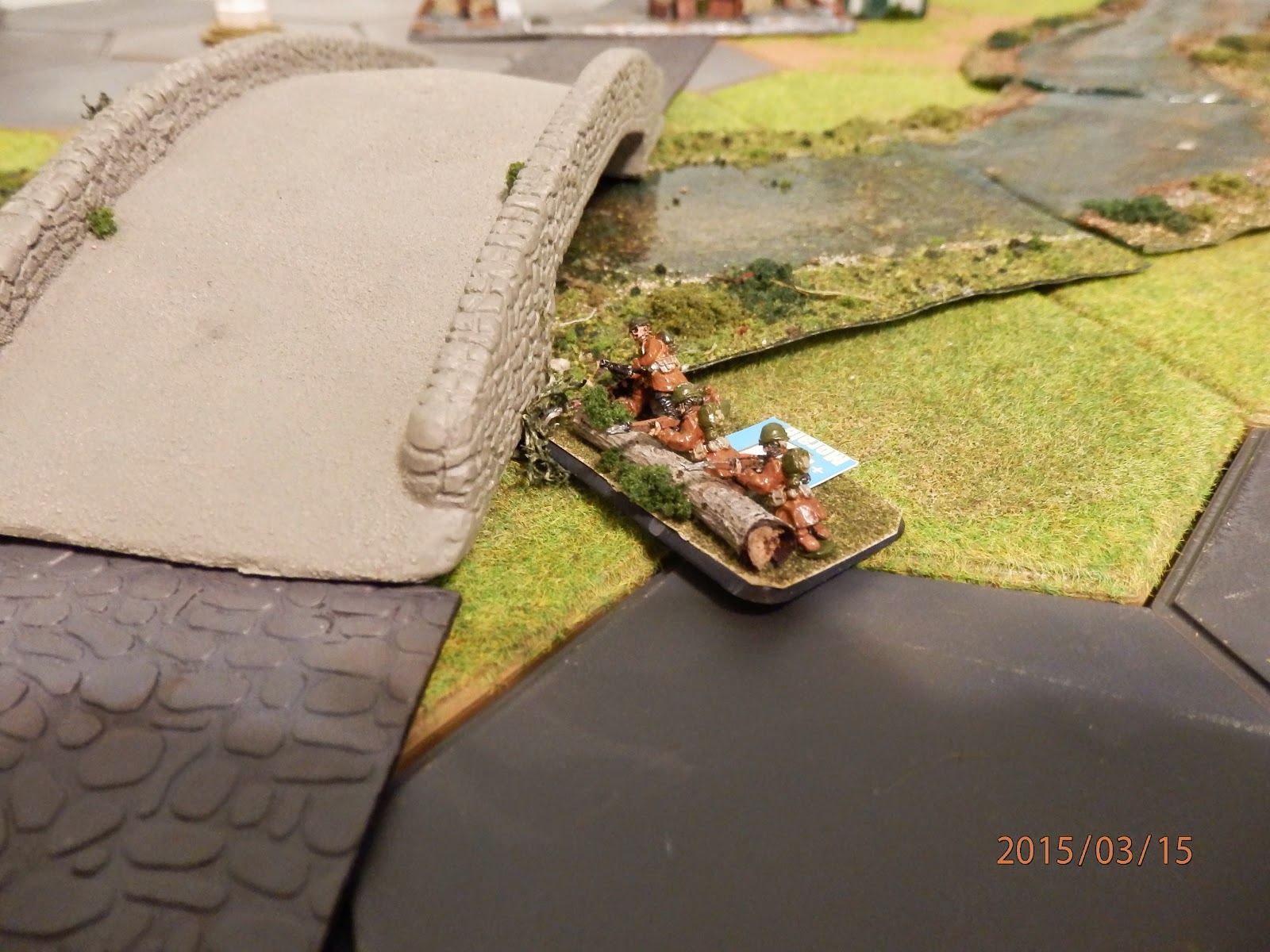 At this point Lt Tulasne has a discussion with Sgt Lemare of second squad. 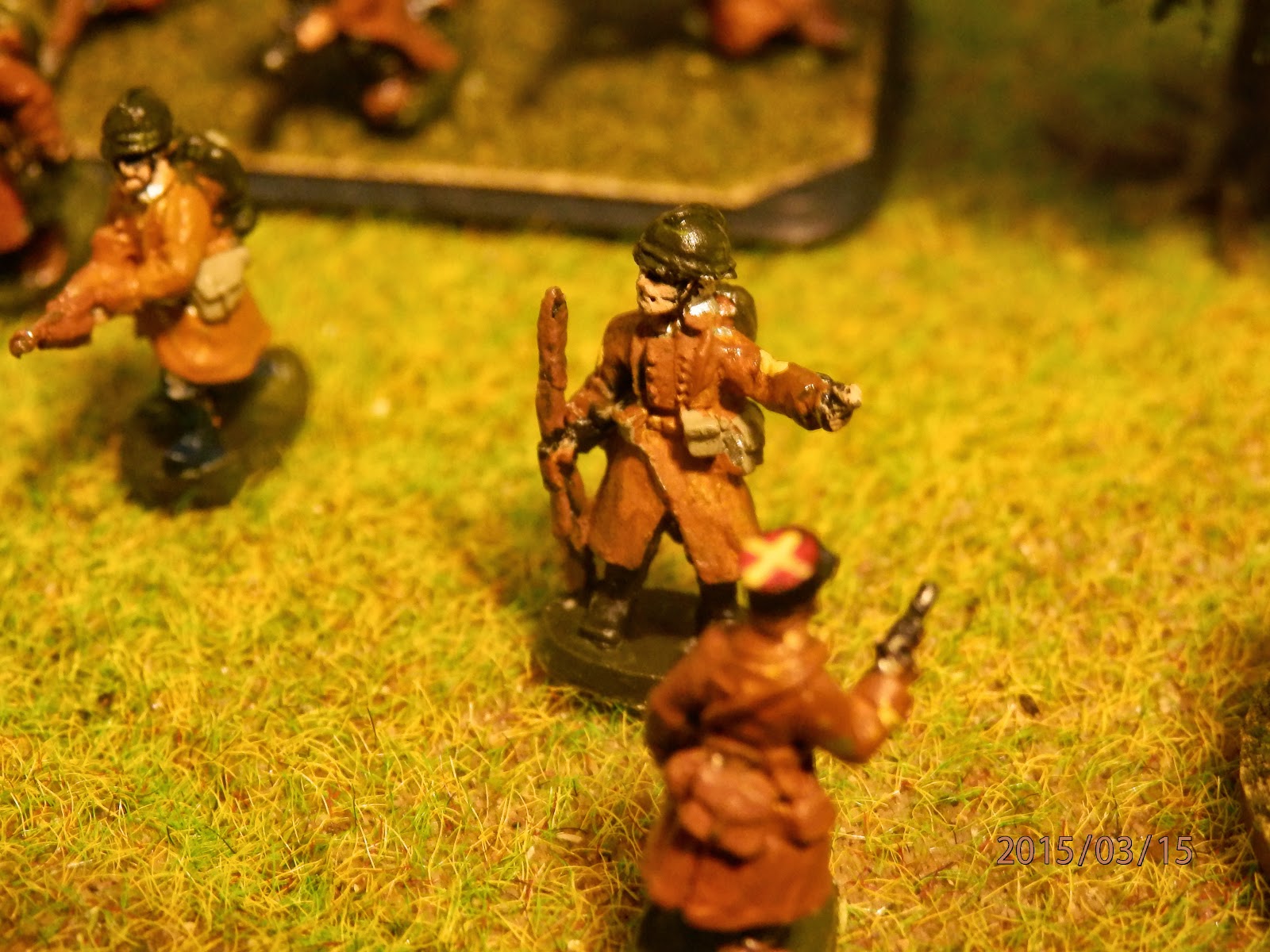 " Go up the street by the houses and attack the warehouse!" 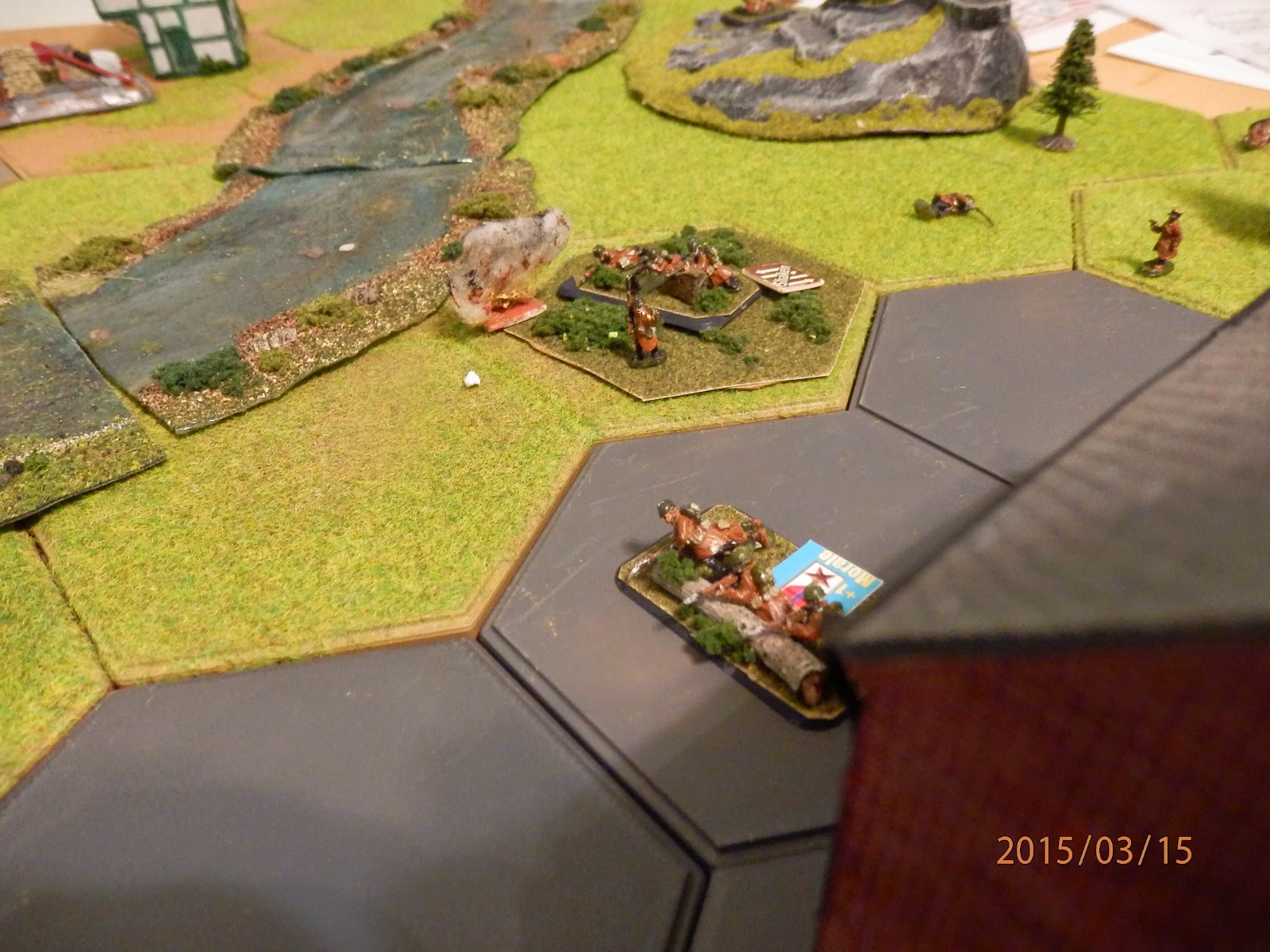 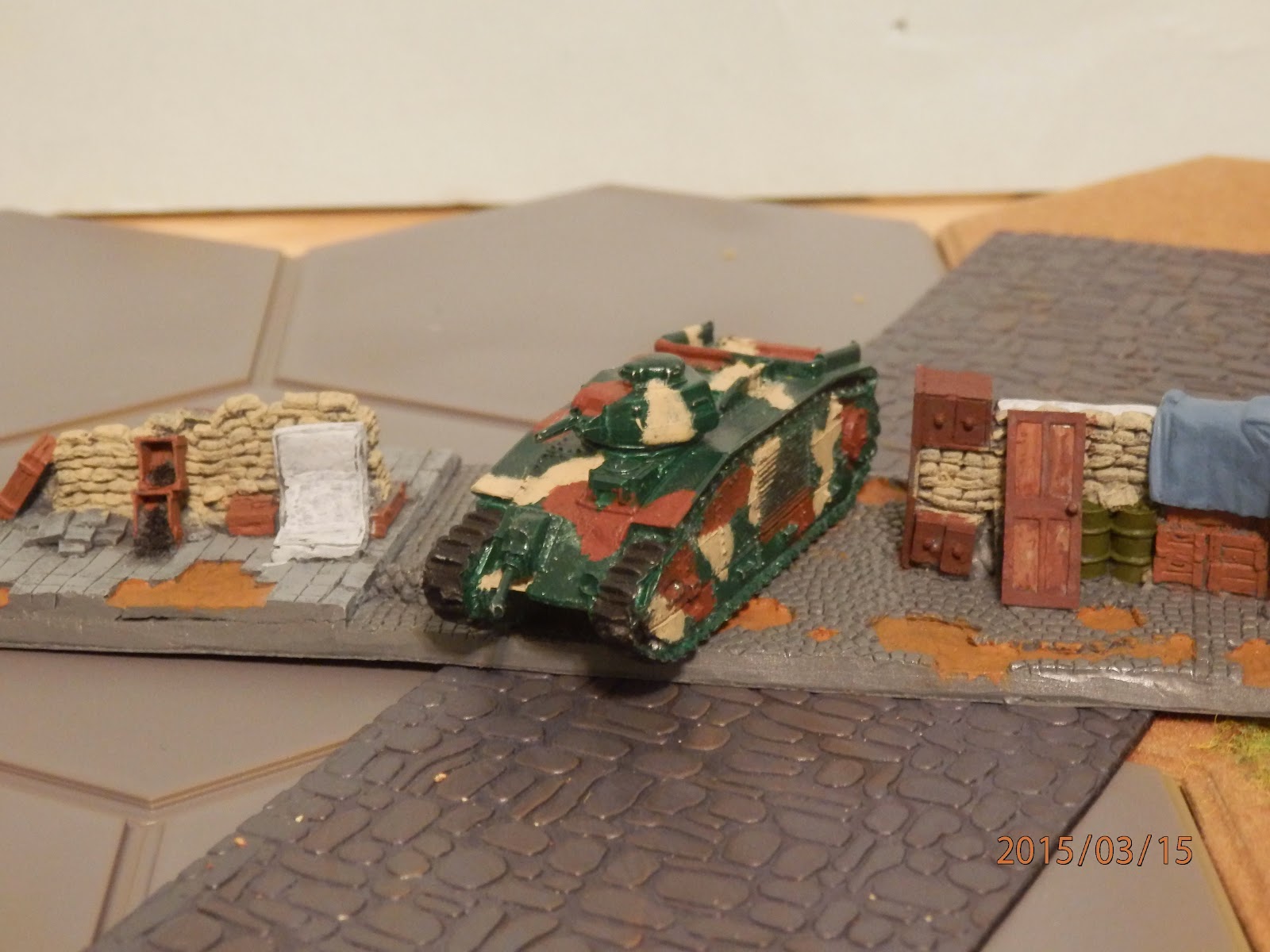 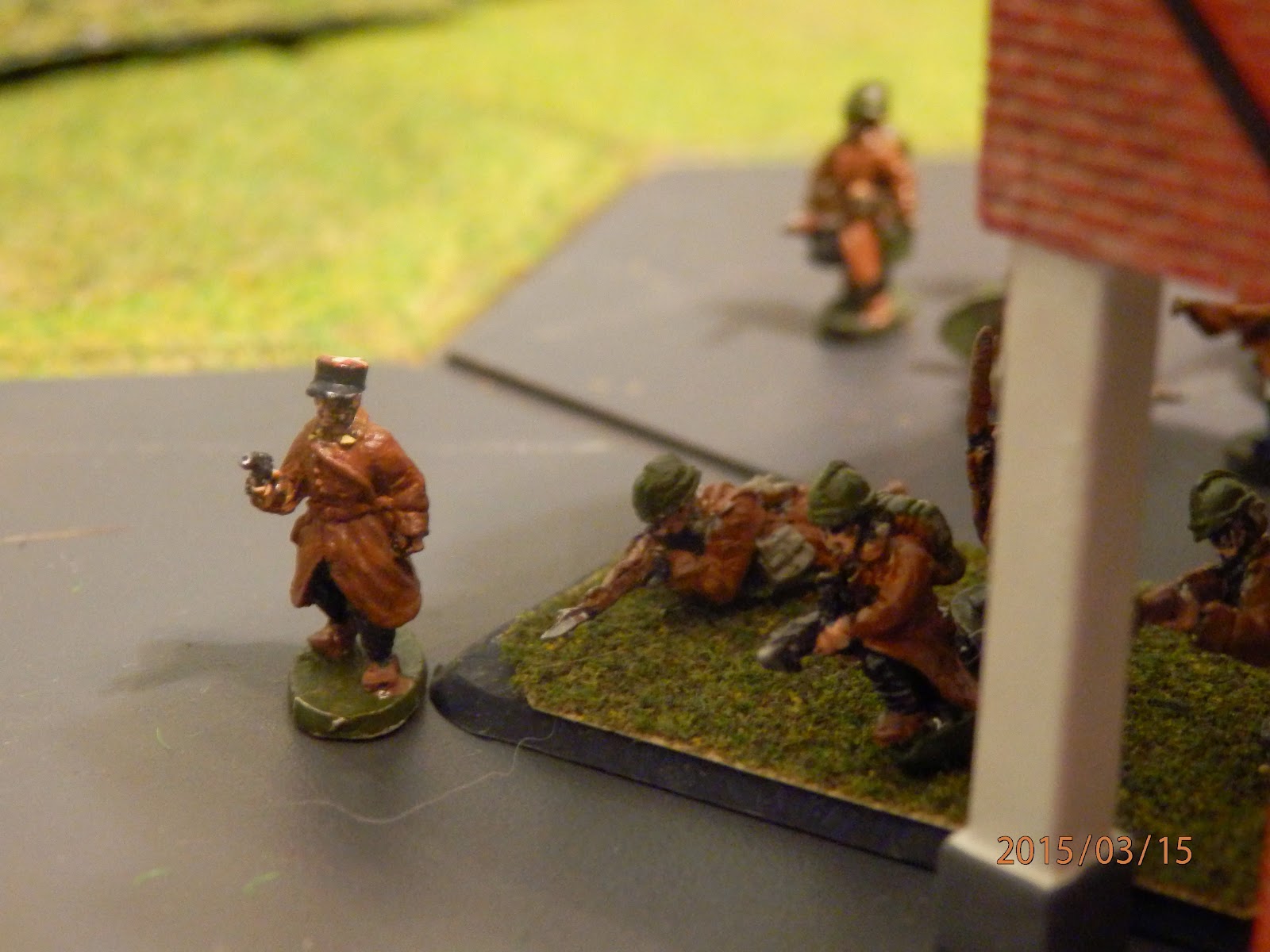 LMG provides suppressive fire before the final sprint to the warehouse! 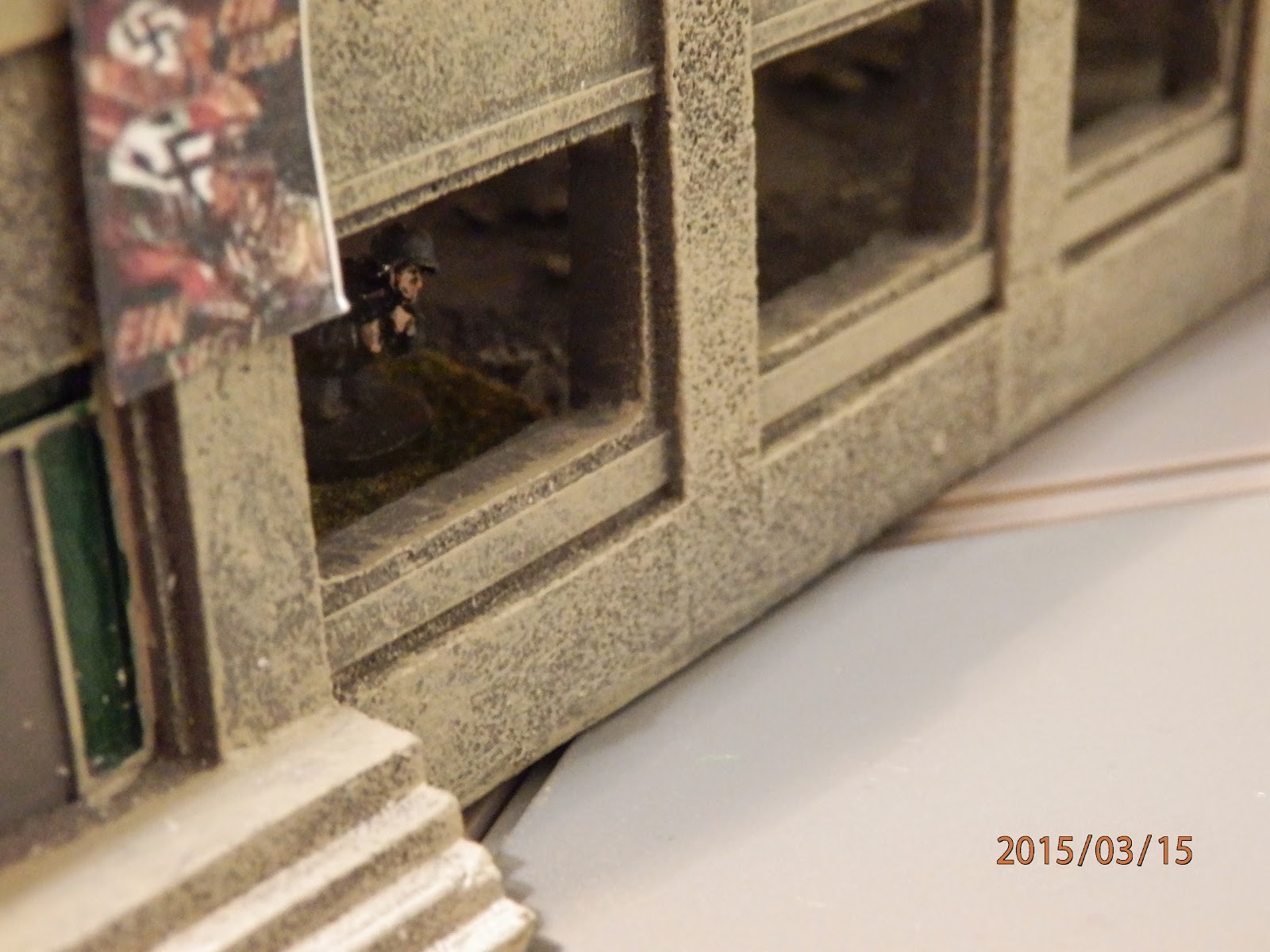 A German LMG is busy as well. 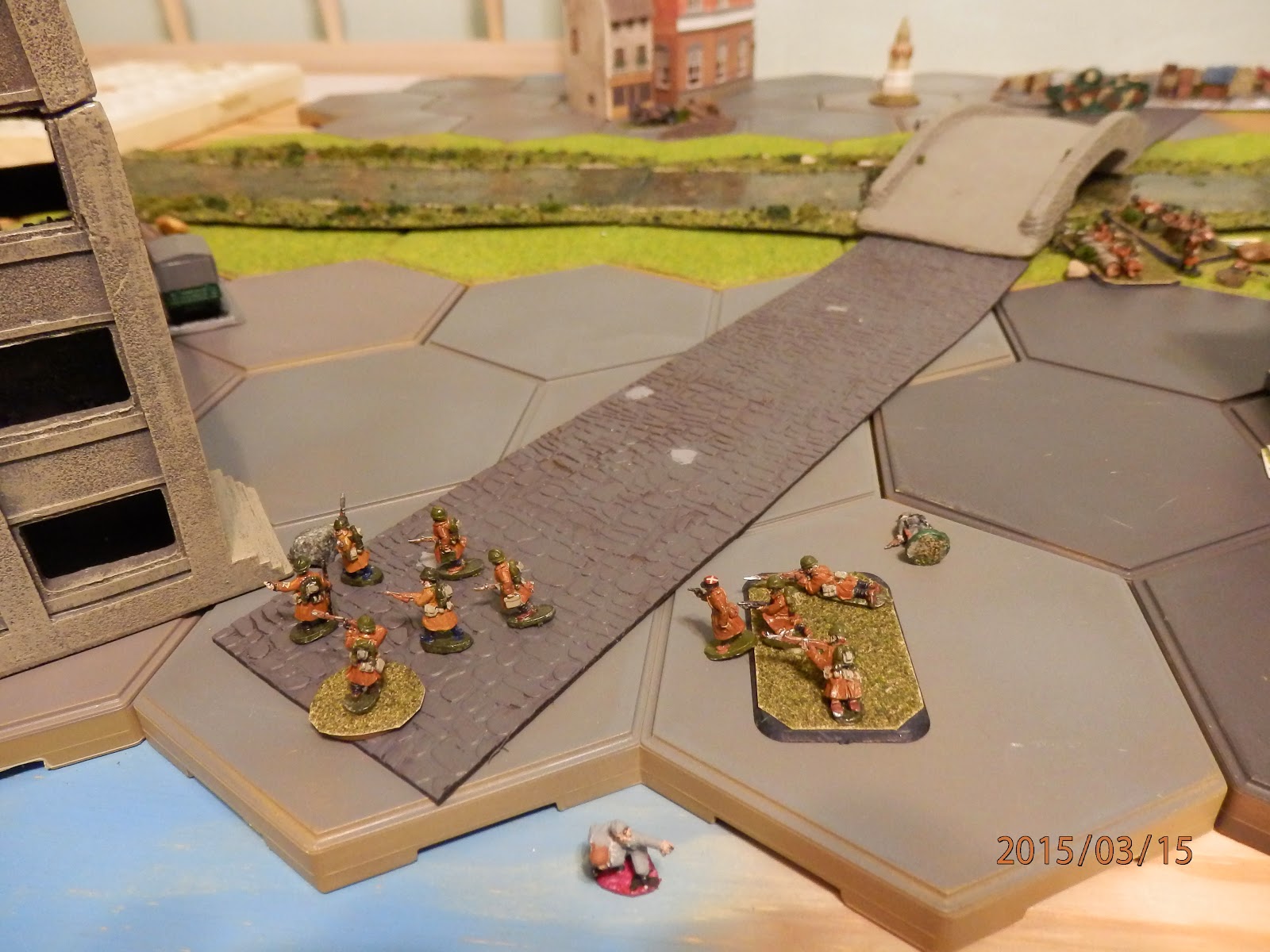 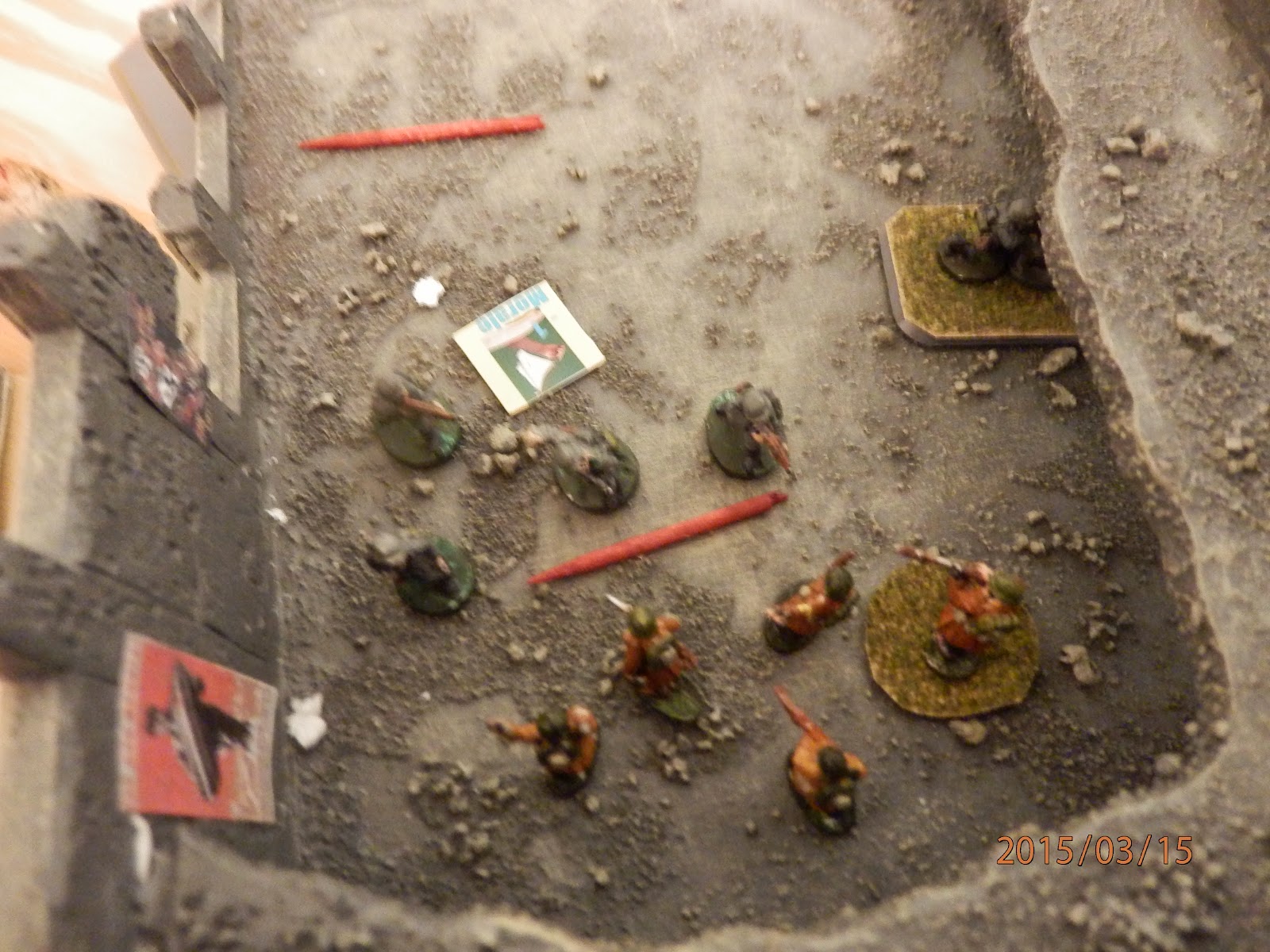 Great game with an exciting finish!   Sgt Lemare had an unlikely chance of becoming a Gr I leader and failed the roll.  He was also not noticed for a medal  (Something else new to Grunts Forward.) Lt Roche, an artillery officer and friend of Lt Tulasne, requested a favor.  After a little thought I decided that his guns were being overrun and he requests help from his friend.  So the next battle will be scenario Q with some modifications!