Just finished reading Charlie Don't Surf. Wanted to try out Di Di Mau and Critical wounds so stopped my "3 battles for Hue" and went with a standard sweep. The standard sweep scenario will actually be in "Middle of Nowhere" which will be the asymetrical warfare expansion to Platoon Forward. This platoon was used 2 posts ago if you want to catch up.

1st and 2nd squad are up morale and 3rd squad is down morale. Also one of the M60 MMGs normally assigned is broken.

Lt McSwain looked at Lt Jaroze with relief as he spoke. " I know you were beat up last battle and lost one of your hogs so I have an easy one for you tomorrow, Ted. All you have to do is secure a small LZ, advance into a hamlet and wait. The rest of the battalion should do the heavy lifting on this one. " The only glitch is you can only land 2 squads at once. There will be one gunship overhead if you need it. There is a buddist school to the left of the hamlet; don't destroy it please. You shouldn't run into too much. Couple of snipers and maybe a VC squad or two. 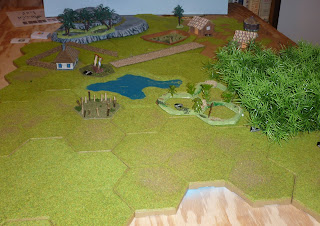 Battlefield. LZ Hotel is at bottom.
Buddist school is white building upper left
What is your plan LT????
McSwain would land his 2 best squads with his one M60 in tandem. They would quickly advance north with 2nd squad going towards the jungle and 1st squad securing the school. 3rd squad would then land and reinforce whoever needed it. 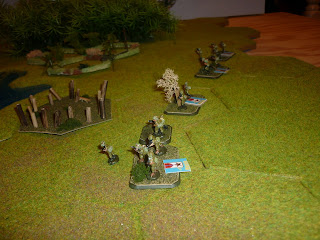 As the squads advance just like at Benning a MMG opened up from the hill from behind the school. This slowed SSgt Davis' advance. Worse, 2nd squad ran into VC when only 20 yards from the jungle and started taking casualties. 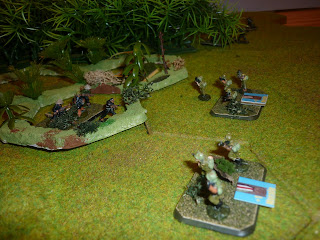 Cpl Lawrence 20 yards from the jungle runs into Charlie
In addition, 3rd squad was delayed for some reason. Lt McSwain got on the horn to Jarose. " Sir, we are taking MMG fire as well as from at least a squad in the jungle. I have WIA. Request the Cobra and my 3rd squad." [ At this point got a random event that brought in a new squad. So Lt Jarose decided to tag along and see what was going on for himself.] 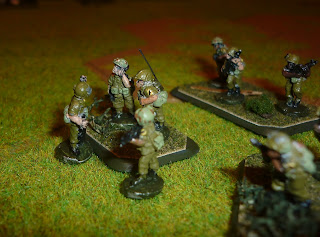 Lt Jaroze arrives and speaks with 1st platoon
Lt Jaroze arrived with not only 3rd squad but with an addiitonal squad as well. The cobra suppressed the MMG allowing 1st squad to advance towards the school. Jaroze suggested that 3rd squad trail 1st and the other 2 squads advance on the treeline. During these discussions the VC advanced on the shaken 2nd squad and killed 2 before Cpl Lawrence hid the survivors in some bamboo. 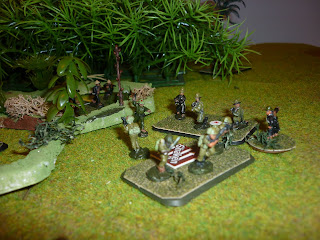 VC attacking 2nd squad
Jaroze next request artillery to work the jungle over and this was granted. 3rd squad was slow so Lt McSwain moved to speed Sgt Colton up. SSgt Davis made it up the hill but the MMG managed to Di Di Ma and escape. 3rd squad with the LT took up positions in the schoolyard which was unoccupied. 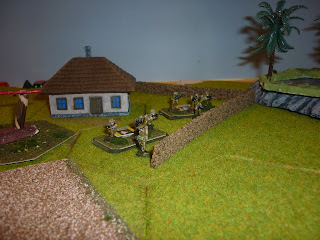 3rd squad in the school yard 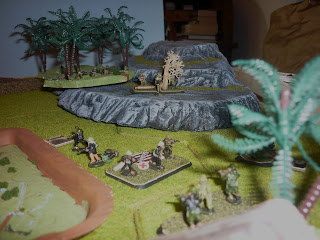 1st squad emerges from the hill and scatters VC in the village
After the artillery, 2nd squad and the extra squad entered the treeline again. The VC where still there but had taken 2 casualties. In addition, their LMG jammed. 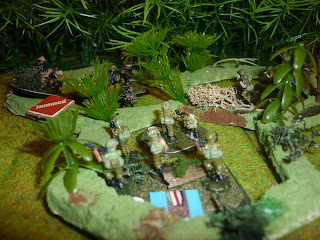 2nd squad re enters the jungle
With the americans in good cover and artillery available, the VC chose to withdraw. The americans sustained 3 KIA and 6 WIA. The VC 4 KIA and 4 WIA. I called it a draw because the VC were stronger than expected.
After the battle Cpl Lawrence is finally promoted to Sgt. SSgt Davis made an off handed comment about Lawrence taking casualties and the now Sgt Lawrence has taken offense. Consequently Sgt Lawrence dislikes SSgt Davis. This will not help the platoon. Furthermore, due to the heavy casualties the platoon will go short next battle by 2 men. Such is life in the Middle of Nowhere!
Fun game. The VC had 2 random reinforcements which made them stronger than expected. I had 5 random events this game to include a human wave by a VC squad. Most games I get 1 or 2.
US forces as above Only 2 squads land 1st turn. Last squad lands on turn 3 or on the second turn of the reinforcement card. 1 addiitonal squad with a Gr II leader was generated as a random reinforcement. In addtion the Company CO came in; a Gr IV brilliant leader
VC forces that were generated were
1 MMG (50% of starting in a bunker; mine didn't)
3 VC squads (1 with poor morale)
1 LMG (50% of starting in a bunker; mine didn't)
1 gr III leader 1 gr II leader 1 gr I leadre who was hesitant
2 reinforcements were generated to include and additional vc squad with gr II leader and a LMG They entered through the hamlet
Enjoy
Joe


Posted by FlightDoc at 6:00 PM No comments: