Came across "Call this a Ruddy Picnic" by Chris Stoesen last week.  I bought it years ago before I knew him because the topic is the Anglo-Italian campaign in East Africa and I like off beat areas. It is great stuff, which is no surprise if you know Chris.  I never did much with it because I was doing skirmish and it is written for company/battalion level actions.  Well, given my latest interest in company/battalion level actions I just had to give it a go!

The first scenario is an Italian attack across the border into Djibouti before the French surrendered in Europe.  A perfect place to test out my "defend" scenario for Battalion Forward.  6mm is not an option so we go with 15mm.  No worries as there isn't a lot of armor in Djbouti. 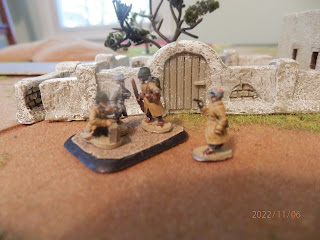 Intellegence says the Italians are going to attack us now that France is falling.  We will resist for the glory of France!

Captain, take your company of Senegalais infantry and occupy the frontier road leading here to Ali Sabieh.  If it appears attack is imminent we will try to send some armor to support.  Good Luck! 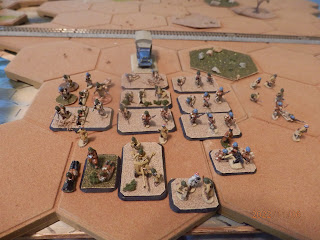 The valiant defenders of Djibouti: 4 platoons plus a 25mm ATG, MMG section, Lt. MTR and those VB grenade things.  I rolled for troop quality.  Chris lists them as good but Battlefront has more categories.  I figured there was a 50/50 chance between trained and experienced and rolled for each platoon. Three of the four platoons are trained; nuts!  I then rolled for leaders [ Good leaders give a positive to the manuver table and they are going to help with orders; I just haven't figured out how yet.] Our captain and 1 Lt is good and the others are average.  So much for a crack unit to defend France's honor! 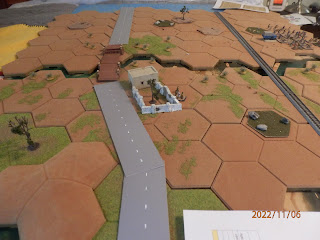 The french defensive positions will be behind the Wadi.  There are two bridges to defend.  Unlike our WW III battle the enemy objectives are pretty clear here.  What out captain doesn't know is what is there plan of attack and what will be there forces. Again each hex is about 100+ish yards. 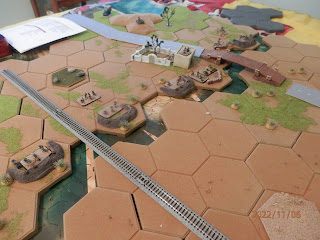 Our captain centers on both bridges with the ATG/MMG near the highway.  3 platoons up and 1 in the courtyard.  Hope this works.  His radio operator asks, "How will we know if the Italians are coming?" suddenly... 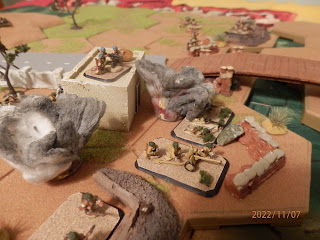 shells burst around the checkpoint.  Our Captain doesn't need to answer. 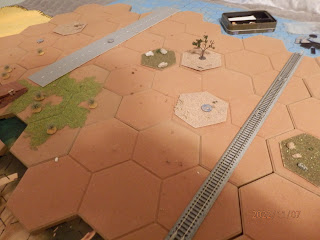 So for the Defend scenario there are 4 tracks for the blinds.  We will see what the Italians have planned for us. 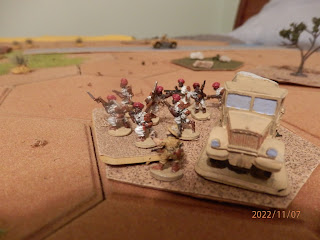 Our Captain can't see anything through the shelling but 2nd platoon on the road reports 2 vehicles approaching.  3rd platoon by the RR bridge reports trucks that discharge brightly colored troops. 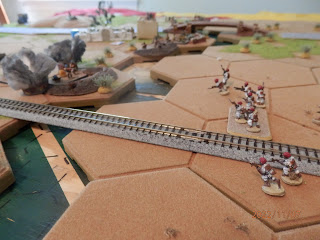 The shelling [ which are 65mm WW I shells against dug in troops] switches to the RR bridge as the Italian colonial troops advance with elan. Another platoon pulls up behind them. 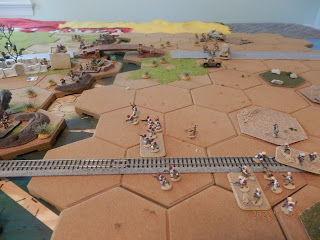 Overview of the attack about 20 minutes after contact.  The AI is controlling the distribution of the Italians and so far it is working.  At the RR bridge 2 platoons of colonials plus a company HQ.  On the main road a scout car has been followed up by a platoon of Italian regulars.  [ they are experienced but not Besegliari.  How often do you get to play with Italian infantry the best troops on the board!]  At the far flank a platoon of infantry has arrived and is about to advance. 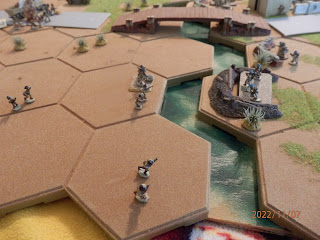 The far left flank of the french lines is going to get busy soon. 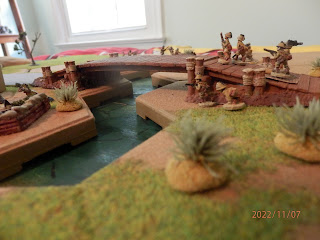 Covered by the scout car, the Italians advance on the bridge.  I thought these Sengalese troops could shoot! 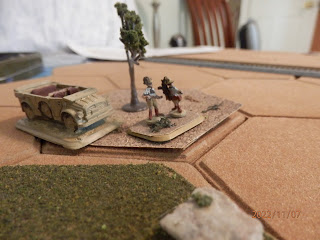 A third colonial platoon + MMG shows up.  The third italian infantry platoon shows up plus their attached MMG plus the battalion commander.  At this point the Italians reverted to normal 9 command dice. They would get 1 more scout care as a reinforcement.

Meanwhile our captain is having trouble controlling the battle.  I gave the French 6 command dice but rarely had more than 4 commands.  They seemed shocked that they were in a shooting war. 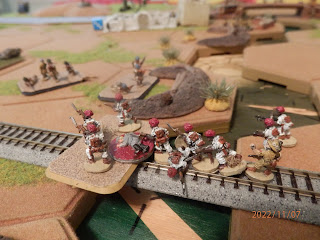 The Colonials fight across the bridge but take heavy casualties. 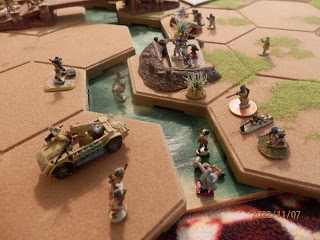 On the far flank the Italians enter the Wadi covered by additional scout cars.  The French are pressed everywhere. 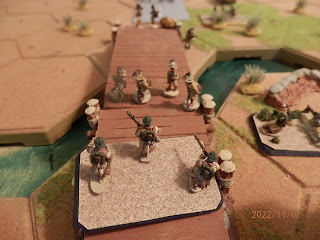 The Italians make it across the bridge where a french squad has moved up to cover... 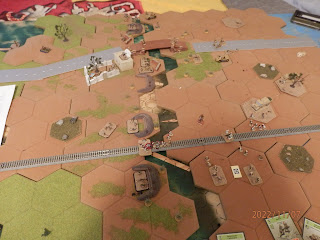 but it is too much.  The Italians are across.  Above you can see the Italians attacking across their three points and doing well, even their right hook.  Their lt mortar is firing smoke on the french MMG which is the only weapon that has been effective for the french.  The Italian CO is trying to call down more artillery.  The french don't have any. 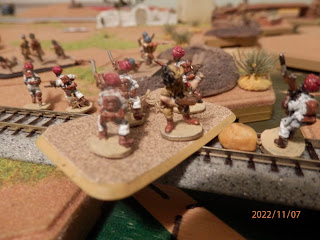 An Italian NCO rallies troops on the RR bridge under fire. 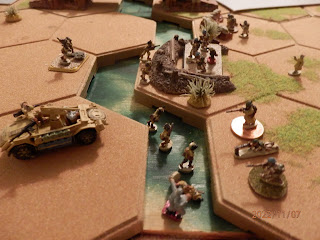 Italians [center] up and over into the trenches... 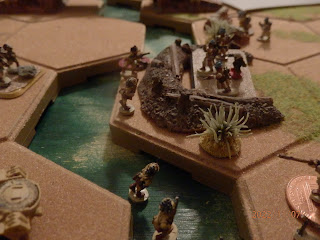 Into a stalemate.  Once in a stalemate morale matters so the Italians have the upper hand. [ seems weird to say that.] 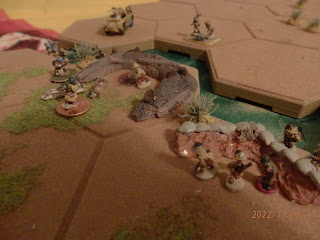 10 minutes later the Italians are clearing the trenches on the far side of the bridge. 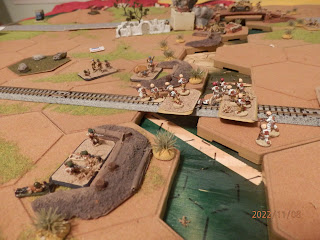 The red colonial troops have been broken by french fire.  Next up are the orange guys. 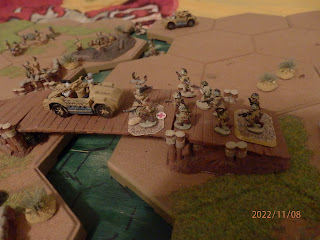 The Italian reserve platoon now comes across the bridge. The company commander leads so as not to lose contact with the successful platoons across the wadi. { I rolled him up and of course he is a good leader.} 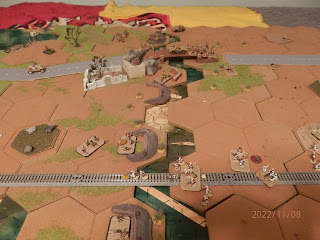 40 minutes into the battle.  The french right flank is holding under pressure.  The left flank is badly bent, out of their defensive positions, and could break soon. In the center the platoon is damaged but holding onto the house.  The reserve platoon is still in the courtyard.  The captain figures the house is key to the entire battle and it is also the best defensive position left.  2 armored cars do show up from HQ. [center left] 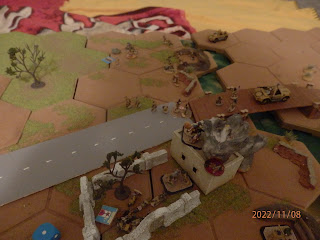 The Italians apparently think the house is special too.  They start to shell it again and the french there start to take some casualties.  The ATG retreats. [ without orders I might add.] 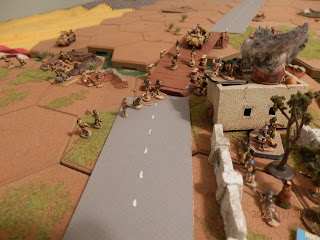 Now the attack for the house starts in earnest.  However, the troops in the courtyard are experienced as well. 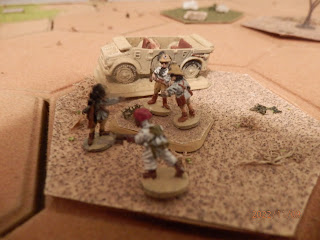 The battalion commander moves up to see the final action. 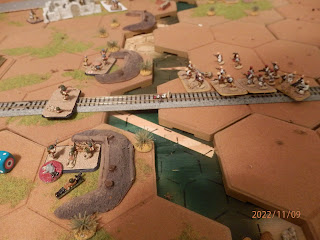 The second colonial platoon fails to take the RR bridge.  Third time has to be the charm right? 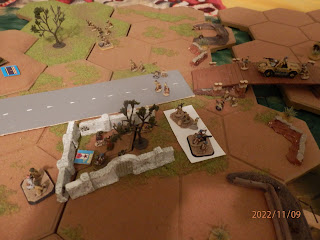 Meanwhile, the italians finally get a foothold in the house.  Both the french platoon and the first italian platoon are shattered.  But the 1st french platoon on the right flank has retreated off the board.  This now leaves the hill to the Italians.  Also our loses have subtracted 2 dice and we are down to 4.  As the french captain was trying to decide what to do he got a final call from 3rd platoon at the RR bridge.  It stated... 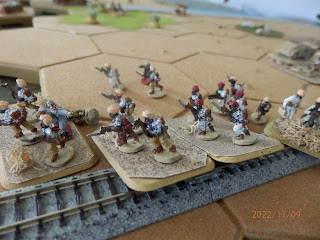 " On third platoon sized attack enemy forces now across bridge in strength.  Half my platoon is gone the rest are fleeing.  Will try to re group behind hill at point 254.  I am sorry mon Capitaine"

Great battle that played faster than I thought because the french got whupped. I actually named all the french officers but they did so bad we will have a re set with these guys.  I like my system for the blinds.  The Italians ended up with 2 companies plus the scout platoon which seemed reasonable. The Italians attacked down the two bridges and sent one platoon to flank; again reasonable.    I am sure it will take some tweaking but a very successful first playtest.