I am nothing if consistent in my inability to stay with one period for very long. As you will note from the last picture in my last post I have started playing around with jet combat.  I ordered DIF locked on which is a nice game but again the combat routine was too basic for my taste.  TFL did have a supplement " Bag the Mig" but, while a valiant effort, wasn't my cup of tea.  I stumbled upon Phantoms by Dave Schueler  which is an adaptation of Craig Taylor's Mustang WW II rules.  I really liked the combat routine in Phantoms and now use it with DIF.  [ I still use my BTH critical hit chart.  A missile hit is -3 on the chart.]

After playing with the system to get it right I finally felt confident to roll up a squadron of F-4s at the beginning of the Vietnam air war.  I chose the beginning to make it more challenging as tactics were still being worked out.  The US was working with rigid 4 ships much like the brits were rigid with their Vics in WW II.   Like Jack I want historical like units so instead of the "triple nickle" I have the "double dimes".  Hopefully my guys will turn into the " largest distributor of Mig parts in the free world!"

Tactical Fighter Squadron 1010.  The double dimes.   Based in Ubon.

What a great bunch of guys to go to war with!  [ My apologies to the WSOs. they are an important part but it is much easier to just keep track of pilots.]

First battle I wanted to start small.  4 v 4 so this is a MIGCAP.  I used Squadron Forward encounter with fighters but obviously did not roll for enemy type or number.  For the quality of the VPAF I rolled a D 6

I rolled for position as per squadron Forward but gave the VPAF a +1 due to their habit of surprising the US. 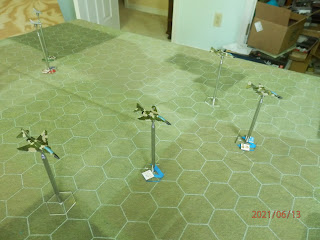 Capt Foreman leads his flight of Phantoms.  His wingman is Lt Bodecker.  Lt Lawson leads the other element with Hap tagging along. 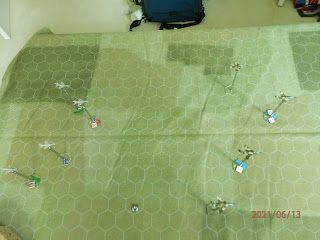 Lawson's backseater calls out bandits 6 o' clock.  Though Foreman is at a disadvantage, he manages to keep the Migs out of missile range until he turns his flight around.  As he heads towards the Migs they continue to close.  He gets a lock and... 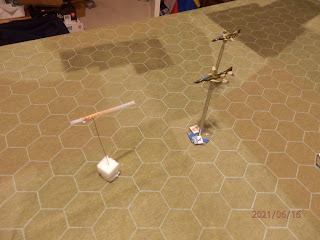 fires a missile at the leading Mig.   [ according to doctrine as far as I can tell, he would be the only one to fire at this time.] 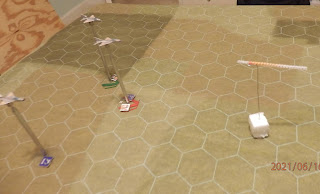 The Mig was either surprised by the shot or was inexperienced because by the time he tried to evade it was too late---SCRATCH ONE MIG!!! 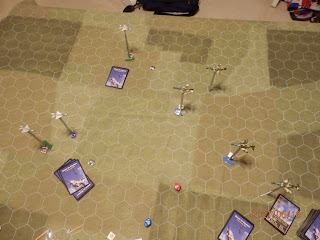 Now the Migs split up.  1 going left and 2 breaking right.    Johnny follows the towards his right.  The rest of his flight will keep the other two Migs off his tail. 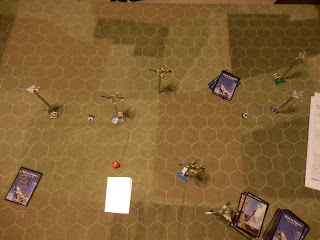 After a couple of Yo Yos, Johnny gets advantaged over the Mig.  He follows it back up north while Cereal hangs on. 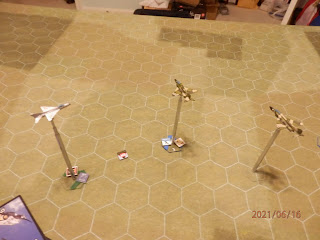 Suddenly the tables turn as the more nimble Mig 21 throws a scare into Johnny. 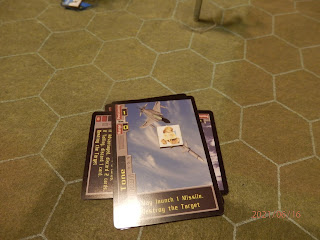 However the Mig pilot is green and Johnny is a Vet.   This allows Johnny to play any card as a break once per game.   This blocks the manuver that would have tailed  Johnny.  [ skill counts!] 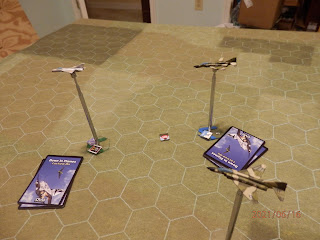 The Mig 21 dives low.  Johnny is able to follow and tail the Mig but he can't get a lock.  Cereal can't follow Johnny's moves and loses his wingman status. 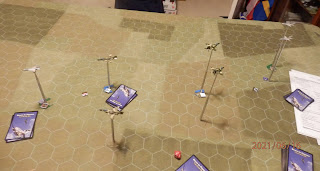 Johnny's element goes low after the 1 Mig.  Lt Lawson's element stays medium to keep the other 2 Mig's off Johnny's tail.  The Migs close with Lawson. 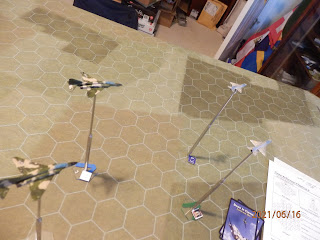 Lt Lawson manages to maneuver onto their tail but he also can't get a radar lock.   The Phantom's reach bingo fuel and break off.

Fun battle that played quick.   Who knew the first missile shot would result in a kill?  I forgot to mention the solo system for DIF is good.  Johnny had a battle going on.  He had the advantage of 2 to 1 and was the more experienced pilot.   Expect to see more Phantoms Forward but this last weekend Sgt Bomba of the FFL was busy again on the Ivory Coast!

Tomahawks over the desert; with the 111th Squadron

First I have to announce that Flotilla Forward is indeed done in draft form.  I just need to reformat it in pretty, readable form to release it.  I hope that will be my summer job.  If not it will be my fall job but I will get it out before Christmas!!!  It is a tweener between Platoon Forward and Squadron Forward but closer to Squadron Forward.  On to todays' post...

The 111 Squadron is one of my first squadrons.  It was a playtest squadron for Squadron Forward and the planes show their age a bit.  I haven't posted with them in a long time but they are a fun squadron.  They started out with 10 or 12 pilots back when I really had squadrons so have attrition down a fair bit.  They have Flight Sgt Boom Balfour get selected for OCS and come back a pilot officer.  They have only had one CO, "Puck" Poole who can outfly any man in the RAF and has 2 kills.  They have a "cool" factor of 1 which means on the base they are considered a fair squadron.  On their last mission their second in command, Lt Thurlby was shot down by a CR 42 and killed.   Puck intends to spin up Flt Lt Johnny Attleburg by having him lead the next mission while Puck goes along.   As you can guess, Puck is not sure if Johnny is up to the task of #2 but wants to give him a fair shot.

Mission is CAP over a supply dump as the 8th army gathers supplies for a coming offensive.   It was spotted by the axis the day before.

Sure enough Puck spots bandits on the horizon and calls out to the lads.  With a little help Johnny moves the group in behind what turns out to be 6 CR -42s.  Their are 2 MC 200s top cover but they are busy racing around higher and frankly not paying attention. 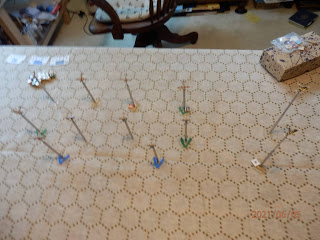 The Tomahawks achieve a bounce!    [  pretty hard to do where the enemy doesn't see you until you fire!] 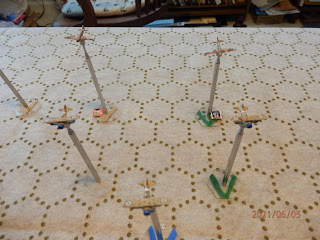 Puck and Charles line it up! 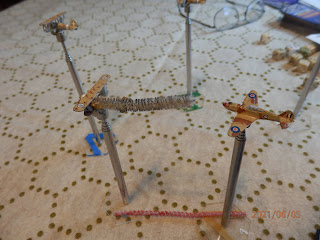 Flt Sgt Skinner gets in tight and gets his 4th kill!.

The other 3 targets are damaged.     The CR -42s forget about bombing and scramble for survival!  Primary mission already accomplished! 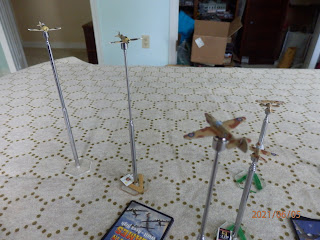 Puck climbs high to prevent the Macchi's from diving on his mates.  He calls for his wingman to join him but Charles is "heavily engaged".  Puck will talk with him after the battle... 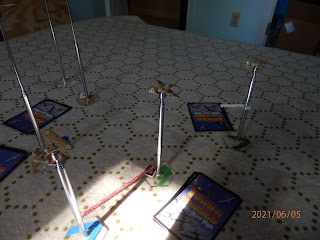 F/O Charles follows the damaged Falcon while his wingman/CO duels the Macchi's.    Another Falcon latches on the inexperienced British officer's tail. 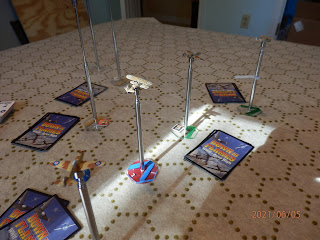 Flt Sgt Skinner, fresh from his kill, shows up and fires at the falcon, wounding the pilot and saving Charles.     During the excitement, the original falcon that Charles was chasing dives away to freedom with severely damaged wings. 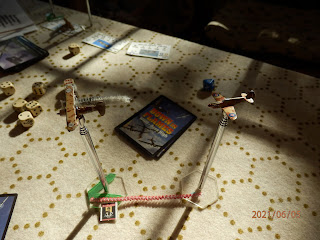 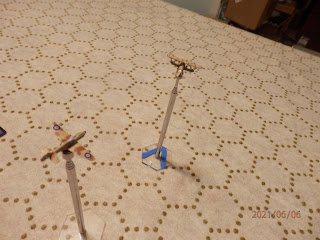 And goes after the section leader. 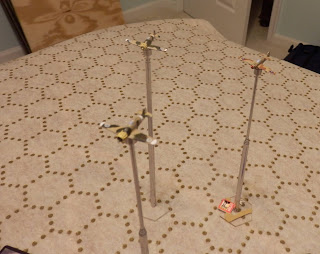 "Puck" finally gets position on the machi  and scores his 3rd kill! 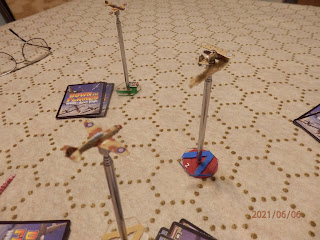 Skinner hammer's the falcon and it starts to leak petrol but still continues to run towards Italian lines.  He can't seem to line up a fatal shot! 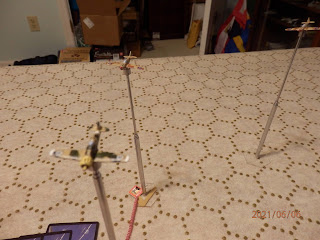 Through some excellent maneuvers Puck actually gets a great shot at the other Machi  but only damages it. 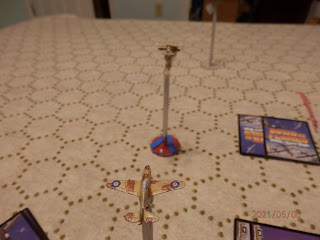 Skinner makes one more pass at the stricken falcon but the Italian refuses to fall.   Skinner admires how the Italian has managed to maneuver his damaged plane all the way back to the front lines.  He waggles his wings and breaks off. 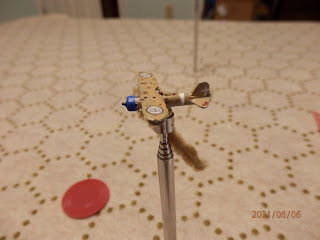 The Italian makes it back to base! 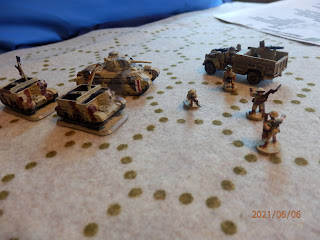 Great game that played in under an hour.  A resounding victory for the 111 Sq.  Flgt Sgt Skinner needed one more kill to make ace and I thought he was going to get it but the Falcon kept out of his cross hairs; amazing.    Flt Lt Attleburg gets 2, gains Veteran status and has proven he can be #2.  Puck added 1 to his score and F/O Charles loses his sprog status but his disliked in the squadron as he failed to go help Puck.  The squadron gains 1 cool point so now their reputation is starting to spread across the theater.     [ It also now will help modify die rolls.] 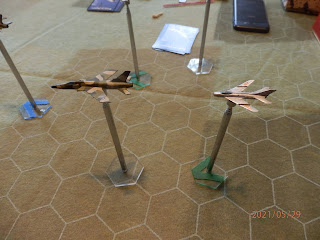