Went to England's biggest wargames show over the weekend and had fun.   As I stated last year, very different from a US show.  It is one day ( 10 to 5 but by the time you get in it is really 11 to 5 and you have to eat as well) so it isnt about playing games; there isnt time.  It is about shopping and seeing the games and people that you havent seen since last year.

It was packed!  I understand that they want you to buy tickets in advance but both lines had a choke point at the door that was easily correctable.   I met Robert Avery (Quadrent 13) before I stood in line and he assured me if I sat with him it would go down in 20 minutes.  We had a great chat about our projects (including a late war east front WW II book he is gong to do for IABSM) for about 30 minutes when much to my dismay the line hadn't shortened ONE BIT!   Take home point here is never trust an Englishman!

Once in the show was well organized.    Here are some pictures I took: 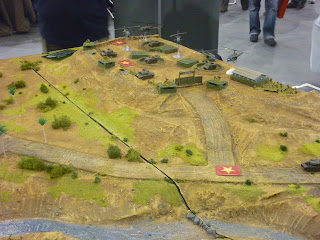 Battlefront was pushing their Vietnam stuff with
a beautiful basecamp board.     Unfortunatly they
haven't released their ANZAC dice yet. 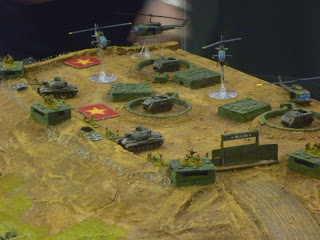 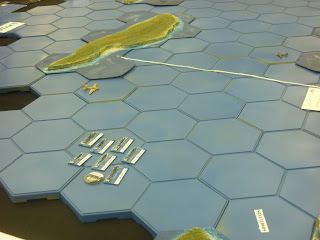 You all know I have a soft spot for air and sea games.   Only saw one WW I air game and 3 sea games.   Here was a game in "the slot" put on by some london gamers. 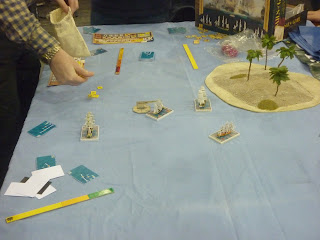 Have seen Sails of Glory talked about on TMP and got to see it in action.  It looks like fun but the ships move very slowly.  I also don't like collectable stuff; it was fun when I was 10 years old. 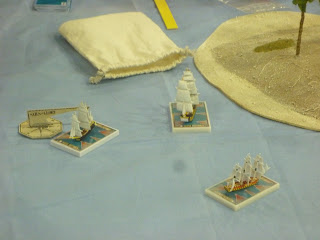 Lastly the ships looked cheap; particularly the plastic sails.   I guess for me while the rules look interesting the game for me will be a no go.   Still looking for the perfect AoS rules I guess.  I did look at Tumbling dice 1/2400 ships and they looked nice with minimal fiddle factor. ( sorry no picture) 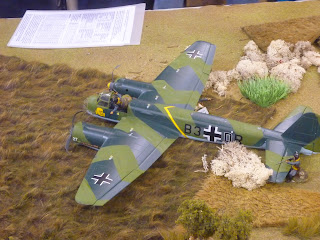 I apologize I can't remember which group ran this game but it was a skirmish game with a downed german aircrew in Britian.  Everyone seemed to be having fun with this one. 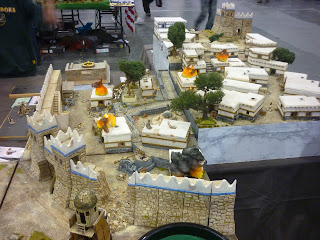 There was also an escape from Pompey game! 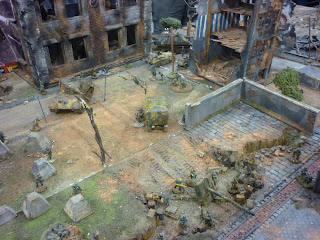 Bolt Action had an impressive Berlin 45 table.   While I don't care for the rules and I game in 15mm their table looked great and people seemed to be having a good time!!! 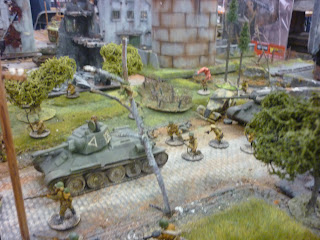 Sorry for the blurry picture.    This table almost makes me switch scale! 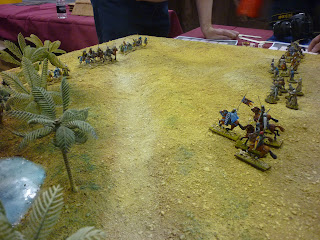 Gripping beast had a huge stand with many boards. 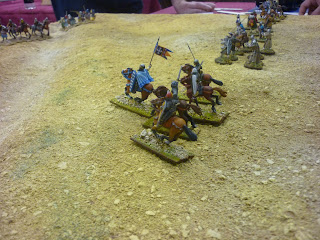 I was pleased to learn they will be moving into the First Crusade with Arab and Crusader dice! 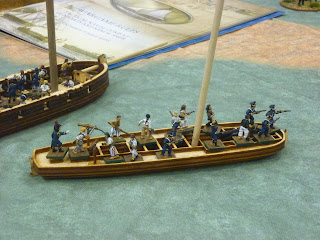 My main shopping quest was to find naval crew in 15mm to fight my peter pig pirates.  I found there aren't any.     I brought a PP fig to the show and found that the Mini figs are actually about as big as the Captain figures.   So I went with some Captain figures above.  I also bought som Blue Moon Pirates which are a little bigger than PP so I think I will be okay.  (One great thing about Salute is you can actually compare figure sizes.) 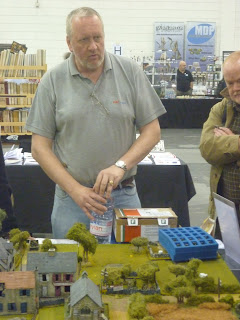 Speaking of Pirates, I stopped by the Too Fat Lardies booth and saw Rich, Nick, Egg and Sid!  It was good to catch up with the gang.  Rich was busy demo'ing Chain of Command and it appeared well recieved.  But I had learned my lession from earlier in the day-- never trust an Englishman.