Finally got all but one of my vehicles that I ordered from QRS.  4 of them were for my Iraqi army and 1 was for my american.  Vehicles are easy to knock out so a week later they were done and I wanted to get them on the table.  One of FoF scenario books ( Road to Baghdad ) had a scenario on a marine attack into the city of Al Kut.  It was a large scenario and I never would have attempted it with Combat Patrol as it would have bogged down.  Since I switched to FoF for everything but infantry fire resolution I wondered if it was too big for FoF solo.  I normally play about 2 squads per side ( 25ish figures per side) and 2-5 vehicles total.  This is a nice force that I can easily keep track of and can finish in 90 minutes or less of actual playing time.  This was 80 figures total with 10 vehicles! I was going large!   I decided to sub in my marine platoon from Platoon Forward.  This was to be their third battle.  1st squad has Sgt Jack.  His is a Gr II leader and the squad has full confidence in his ability so their morale is +1.
Sgt Jack sat next to the Lt as Capt Jackson explained their next op.  It sounded tough.  The battalion was to attack into Al Kut to pin the Iraqis in place so the rest of the marines go swing west and move onto Baghdad.  Jack would rather be doing the swinging than urban fighting with some ragheads but marines do as they are told.  Capt Jackson said resistance was suppose to be heavy. The platoon was to take and hold an intersection. They would have 2 tanks in support.  Rules of engagement were loose but nothing heavier than MGs could be directed at religious buildings.
Characters
Lt DeClines   Annapolis grad     Sensible/ wealth         Gr I
Just Jack 1st Sq      mechanic          Jovial/ position     Gr II       +2
Cpl Koke  1st Fireteam  race car driver (junior)  addict/thrills   Gr 0
Cpl Fast Jones 2nd Fireteam  inept   religion             Gr 0
LCpl Betts     acting leader 3rd fireteam                    Gr 0
Sgt Lee          3rd squad           Gr II

Al Kut intersection.  Baath HQ has the Iraqi flag in front.  I think it is one of the best boards I have put down.  ( Probably still 2 buildings short.  Maybe Christmas?)  Lt DeClines plan is to have 1st squad attack appartment building closest to camera and 3rd attack across gas station into the other one.  Secure both buildings then push across the street. 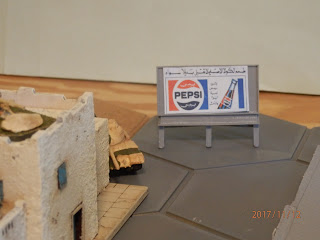 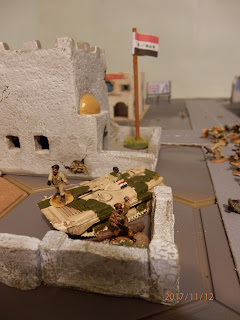 Those Iraqi are such cut ups!  Pre battle picture of the 3 officers posing in front of party HQ.  Irregular officer waving to his mom and Republican guard officer threatening to shoot the cameraman.  Such jokesters! 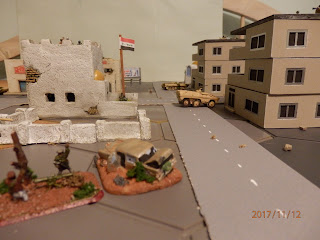 A view down the cross street. 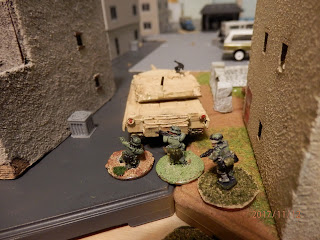 Koke enters with his team 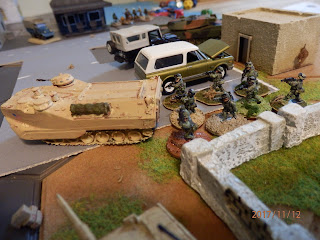 Jack enters with the rest of 1st Squad towards the apartments.

FOF has some great rules for the destruction of buildings.  They are probably a bit generous but in 20 years of playing I have had 3 buildings destroyed until FOF.  So you could say I am due.   Our tank fires at the apartment building several times and..... 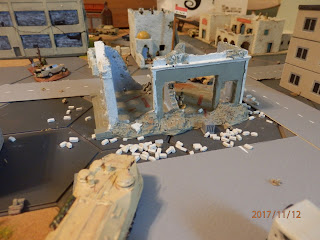 it is now freely air conditioned!!!!!!  The Iraqi squad runs for the HQ.  (They will actually keep running soon.) 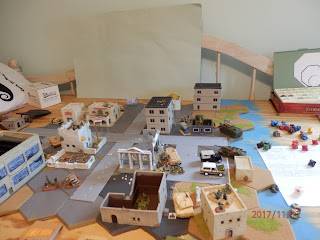 After 2 turns....   Cpl Koke is in the near building sniping across the street.  1st squad is ready to enter the apartments.  The 1st tank will move up to support 1st squad.  Lt and the MMG will move up to the next phase line.  3rd squad was surprised by resistance in the gas station.  Sgt Lee lost his track but cleared the building with no casualties.  He now is lagging behind however. 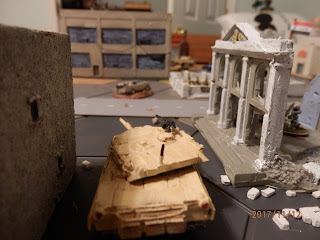 The marines continue to bring assests up and are deciding when to cross the road when over the net and in the air there is a load noise!  ( cool random event!) 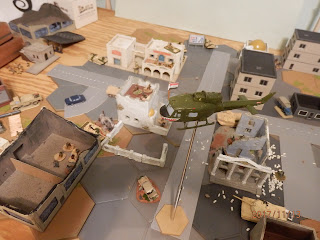 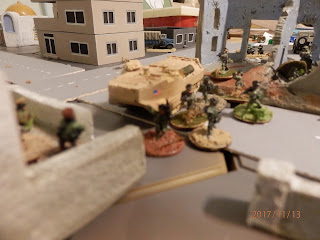 Emboldened Jack charges again with his track as cover. RPGs mercifully bounce off the track; the fighting is fierce and quick.  No bad guys surrender so 6 go to Allah and the squad sustains 1 Lt wound. Jack takes the Baath HQ!  At this point they heard crying; no it is not some sailor! It is a woman and her son held prisoner in the HQ undoubtedly for some unamerican reason. ( 2nd cool random event) 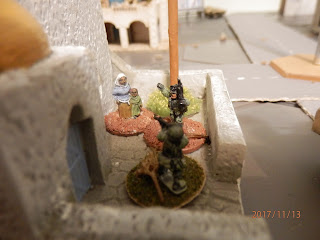 Jack rescues a Mom and her lad!  They lose a turn but it was worth it!

Now I have my third cool random event that I carried over from Platoon Forward.  It is called a "leadership check".  It represents imperfect situational awareness of your little guys on the battlefield.  This occurs to Koke who is with his fireteam facing the factory.   After seeign the rest of the squad successfully charge HQ he decides... 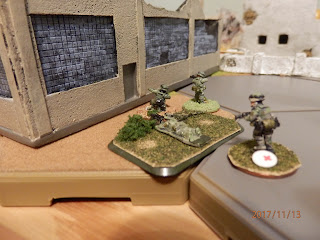 The proper NCO action is to charge the factory!  The trailing marine takes a Lt wound crossing the street but they make it. 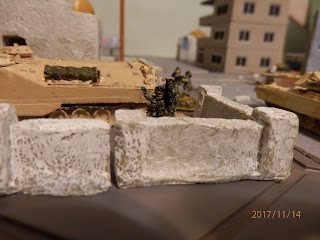 Sgt Jack questioning if Koke has lost his mind!

Koke makes it into the factory where there are no enemy on the ground floor.  Jack sees his CPL dash across the street and curses.  He doesn't know how many people are in the factory.  It hasn't been softened up yet.  It could easily be a hornets nest. He has 8 marines in HQ including 1 WIA.  He tells Cpl Fast Jones to keep his fireteam here and wait for the LT.  He also leaves the wounded man from Betts fireteam and take Betts and one other marine with him to go save Koke.  As he enters the factory he hears sounds of battle and fears he is too late.  As he peers around the corner he see 3 marines up including Koke and 5 Arabs down.  Koke got lucky!  He will give him an ass chewing later!
Great battle!  Fun that played a little long (2 hours) but FOF clearly managed all the toys solo.
Post battle Capt Jackson is impressed with Sgt Jack.  He probably would have gotten a medal but he just got a Bronze star last battle!  He is certainly riding high.  Cpl Koke gets his chewing and his fireteam is not impressed as they lose confidence in him.  Their morale drops to Normal if he is leading.  No NCO comes into 3rd fireteam and Betts does not get promoted.
Really fun and have to admit thing the modeling is improving.  I just like looking at the figures on the table.

Real life again has gotten in the way of gaming.   Played one game with Sgt Lachman and might report on that next week.  Wanted to give everyone an opinion of 3D printed stuff in 15mm since I haven't really read any reviews.  This is one man's opinoin and your mileage may vary.
First, I ordered 8 vehicles from QRF 6 Sept and still have nothing.  I did get a response to my third e-mail but that is a different story.  Needless to say I wasn't keen on ordering any more from them and really felt Sgt Lachman's men needed a Jadgkanone in support.  Scale Creep didn't have any so thought I would give Bashytubits a whirl.  [ He posts on TMP frequently.]
First off, Bashy was very easy to deal with.  Very responsive and I got my toy quickly;  thank you!
It set me back $6 (yea) with $4 postage (boo) so price was slightly cheaper than scale creep but not much. 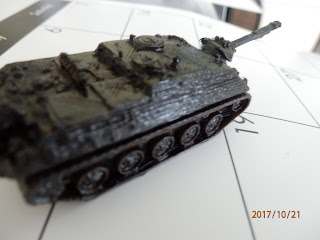 Here is what I got.  I liked that it came in black so I didn't have to prime.  I was concerned about the fine lines but hoped once painted it would be fine. 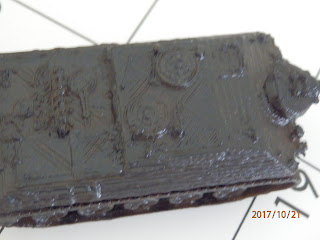 Not a great shot but does show some of the detail of the model which is pretty good.  Unfortunately the lines are apparent as well.

It painted up very easily and took I-94 decals well.  Now if you are a good 2.5 feet away the model looks very good.  As readers of this board know I skirmish so my whole board is 3x3 ft so I am normally 2 feet or less away.  Here the lines are still apparent. 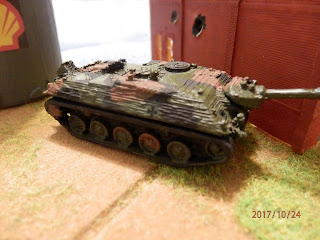 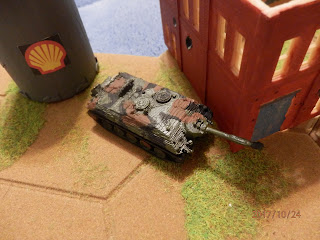 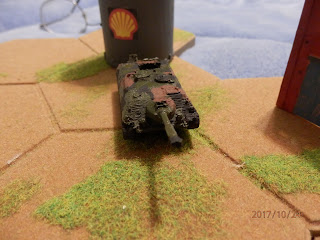 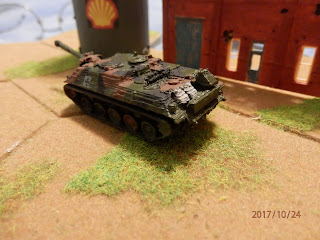 So I pulled a QRF Jaguar for comparison as they are about the same size. 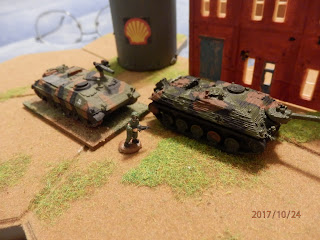 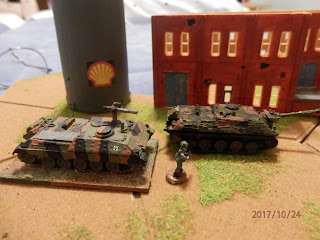 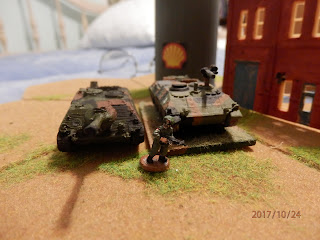 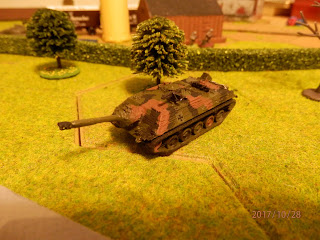 Finally I did "pimp my ride" by adding a LMG from the bits box.

So what do I think?

If you are playing FOW or a large operational game with a big board and lots of vehicles I think Bashy's stuff is a great idea.  You will probably save $2 per vehicle, have great service, easy to paint and look fine from afar.  If you are in the weeds 18-30 inches from your forces with 2-3 vehicles on the board I am not sure it will be my first choice.  That said, I will proudly field my Jadgkanone and will look to Bashy if I need something else esoteric.