Would you can the Major?

Sorry for the lack of posts.  Baseball playoffs have cut into gaming time!  It is not looking good for the cubs.
Painted up 2 B-25s so wanted to get them on the board.  For some reason whenever I think of B-25s I think of the pacific or Tunisia.  So pulled out my P-38 Headhunter's Sq from the Pacific and ran a game using Squadron Forward except I didn't roll up the mission; I selected escort.  Another thing I do with Squadron Forward is I limit the squadron to 8 pilots.  While not realistic it makes sure that they all get to fly since most missions I will only take a flight up.
The Headhunter's have had a rough go of it.  Even though they have won 2 missions and lost 2; one win was against a photo plane and both losses have been bad.  The squadron only has 2 kills and their reputation is -2 cool points.  Moreover, Col Birch, the group commander, has been unimpressed.
With all this rolling in his head Maj Lightning prepares to take 4 P-38Ls over the Philepeans Sea escorting B-25s with a target of a Jap DD probably retreating after bringing supplies.
Maj Lightning  Coarse/ engineering   Vet   1 kill
2LT Chip Peters  jovial/govt      green      dead eye

Disaster strikes as Maj Lightning is late to the rendezvous due to head winds. ( Rolled a "1" on the rendezvous chart)   This allows 7 Jap fighters 3 turns to go over the bombers.  It is not pretty. 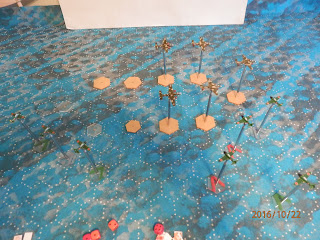 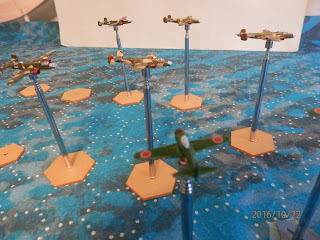 A George lines up for the first kill 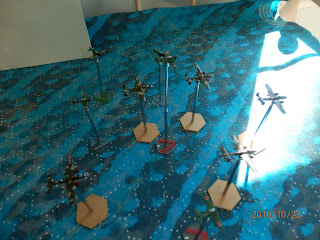 In all 2 bombers are downed and 2 turn back on 1 engine.  "Where is our fighter cover?" 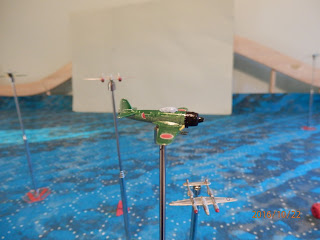 Maj Lightning shows up but the damage is done.  3 more bombers are splashed as the lightenings try to enter the fray. 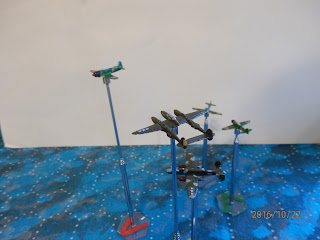 The only highlight is Lt Adkins downs one!  2Lt Nixon (his wingman) had "engine trouble" earlier and left.

Maj Lightning knew he was in trouble when he reported to Col Birch.  If you were Birch what would you have done?  Can him as that is 3 loses including this annihilation?  Try to save an experienced field grade officer?  In the end I puts the chances at "possible" and let AKOT decide.  Birch did not can him but he is on thin ice.  Col Birch is going to fly the next mission as an observer to see how the Major handles his men.  He also has insisted that Lt Adkins fly as well.  The squadron lost another cool point so morale is declining.
For those of you that want to play this I rolled up the following aircraft:
4 Georges, 1 Ace, 2 Vets and 1 green
3 Zeros, 1 Vet, 1 Avg, 1 Green
Try it with the P-38s on time and let me know how it goes!

Also did a scenario from FOF Classified book.  This one involves an arms dealer selling something to local rebels.  Delta is going to stop it. 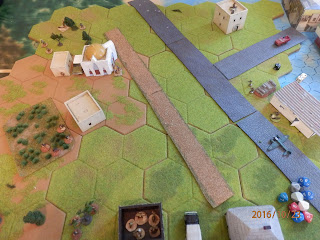 Delta entering from the bottom.  Old JU-88 on the runway waiting for the arms dealer and his 4 body guards to finish business. 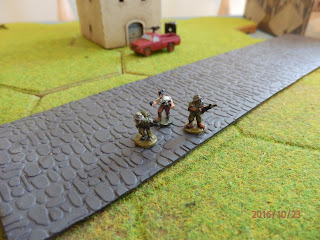 As the bullets start to fly Alexander Kirk with to body guards make their way to the plane. 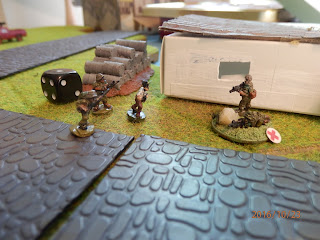 The LMG gunner is wounded but dragged into the plane. Kirk is also wounded but taken by air to an expensive and secret hospital where he survives. 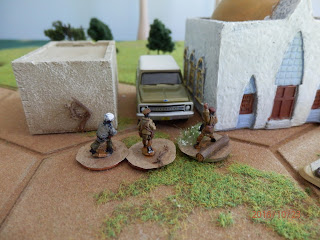 Rebel leader makes it to his trusty Chevy ready to haul out of here! 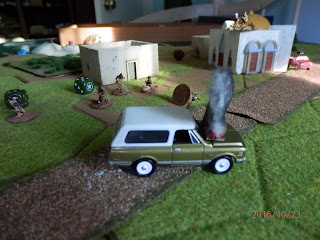 Unfortunately the truck is not warrantied against LAWs.  Delta captures the leader and the package.  They sustain 1 KIA and 1 seriously wounded.


Posted by FlightDoc at 2:42 PM No comments:

Been busy painting up my French indo-china forces.  Played one game in Afganistan 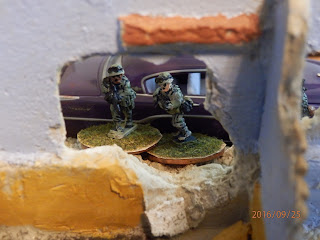 And then took a break with a battle of Saga.  I have invented several rules to make Saga more realistic but every time I do it also takes away the fun factor.  The only rule I have kept is variable movement.  Otherwise I admit that Saga bears little relation to middle age fighting but it is a whale of a game to play!
I pulled a scenario from Wargames Illustrated ( don't remember the issue) called Eadric the Wild vs William Fitzobern.  Basically Fitzobern is a Norman knight whose job it is to keep the Welsh border quiet. Eadric the Wild ( a saxon) teams with Welsh Lord Bleddyn to invade England.  Thus the Welsh are attacking and the Normans are arrayed along an old roman road to stop them. 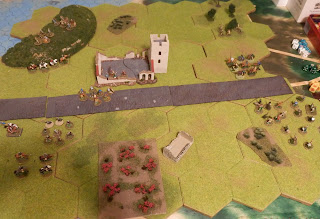 There is a roman ruin in the middle of the board that Eadric can start hidden in order to ambush the Normans.
I played each side used 5 points.
Unfortunately for the Normans, their first moves are to get their crossbowmen into the ruin. 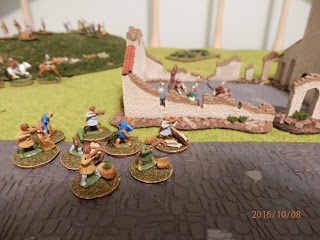 Eadric ambushes the crossbowmen leaving only 2 alive to scurry back to England. 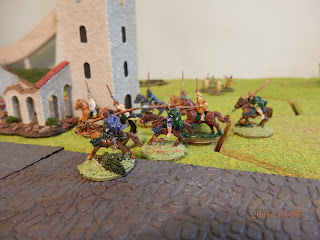 Welsh horsemen move up in support. 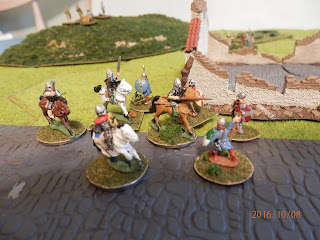 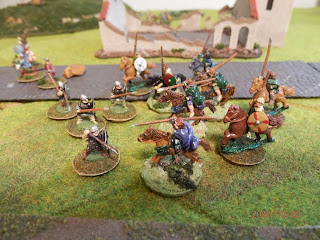 Welsh horsemen smash into the Sergeants and drive them back. 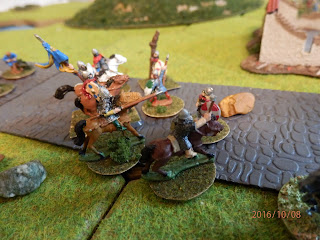 Fitzobern himself attacks Eadric with crush and the Saxons are wiped out! 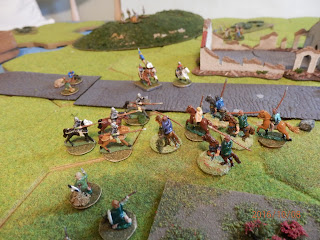 Horses in the middle!  Unfortunately the knight's better training and armor tell the tale and the Welsh  horsemen must retreat. 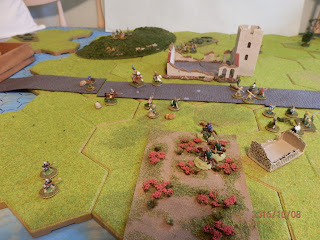 Welsh javelins take their toll on the knights; the Bleddyn sends his elite fighters in and the knights are cut down.
With only 2 knights, 2 sergeants and 2 crossbowmen left, Fitzobern sounds retreat back tot the castle!